We're kicking off our second year here at Haighteration with an in-depth look at the neighborhood's newest restaurant, Greenburger's, which officially opens at 518 Haight Street today.

Greenburger's is the brainchild of husband-and-wife team Stefanie Greenberg Nudelman, a businesswoman, and Matt Nudelman, a chef who previously worked at Perry's On The Embarcadero. Together, they started the plans for Greenburger's about two years ago, had the menu worked out a year later, and finally got the keys to the former Bistro St. Germain space in late December. Then the real work began. For starters, the restaurant as they obtained it was extremely dark. Nearly every surface was painted black — the walls, the ceilings, the beams, everything. The Nudelmans knew that they wanted to create a bright, welcoming space, meaning the black had to go. It took almost a month just to repaint the expansive ceiling. The result? A bright white ceiling, light green walls, and a much cheerier atmosphere overall. 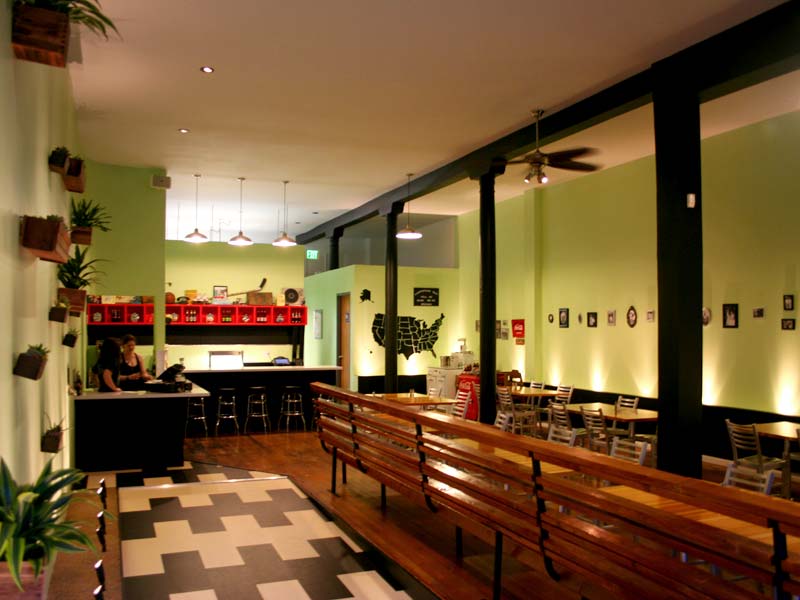 The space is outfitted with tons of touches from the Nudelmans' personal lives, reflecting their roots in upstate New York, Chicago, and Canada — and pretty much every element in the restaurant has a backstory. As you walk up the ramp entering the restaurant, you pass a living wall of succulents arranged and hung by Stefanie. 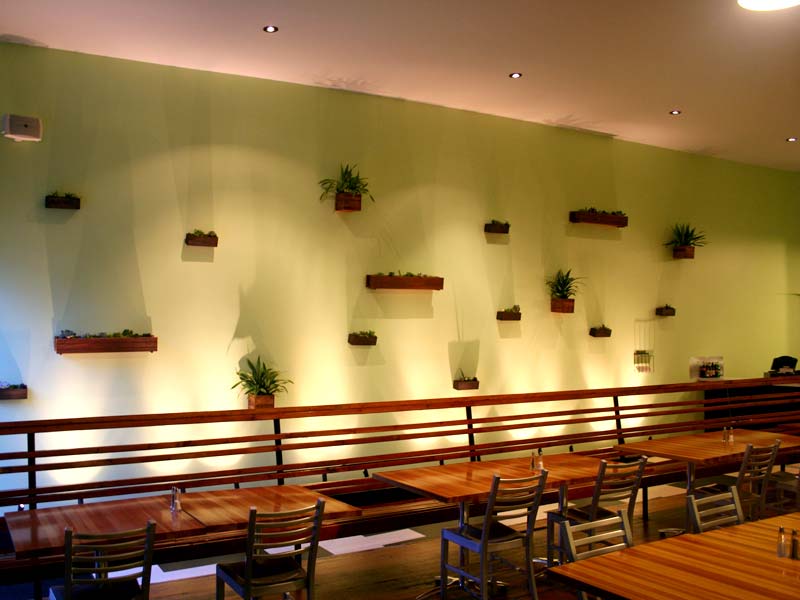 You might recall one prominent feature of Bistro St. Germain (and the Thai place before it) — a rather imposing, sloping wall of wood and metal that stretched all the way to the ceiling, dividing the entrance ramp from the dining area. Greenburger's has done away with that structure — or at least most of it. It proved surprisingly challenging to remove, so they've kept the bottom section as a bench that runs the length of the restaurant. The unwanted section was repurposed, its lumber used to build a studio for an artist in Potrero Hill. 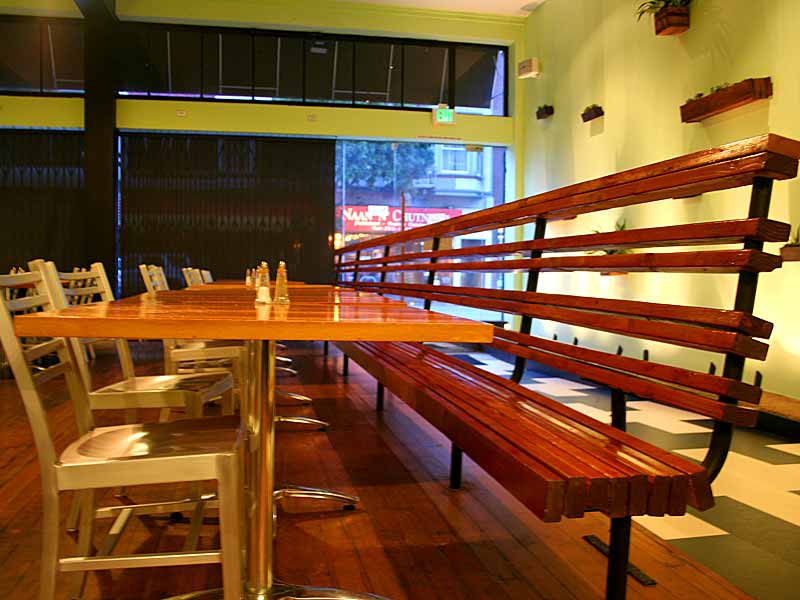 The eastern wall of the space is lined with a series of photos of Matt and Stefanie's family members, hung in vintage frames the couple found at thrift stores. 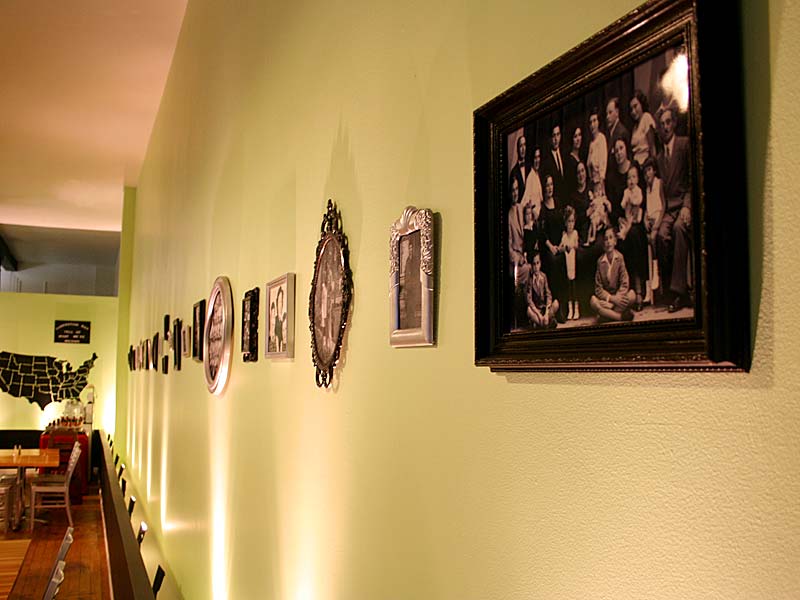 And in a further tribute to their relatives, the bathroom features silhouettes of family pets, past and present. 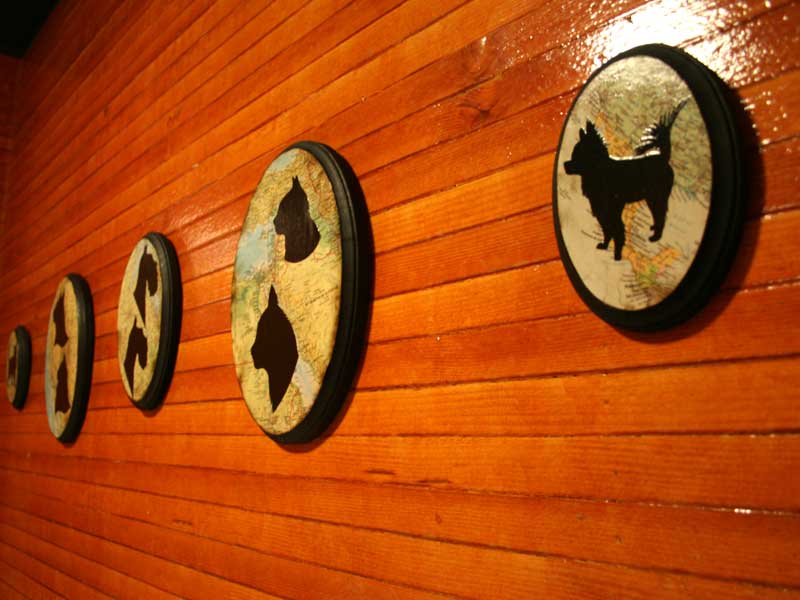 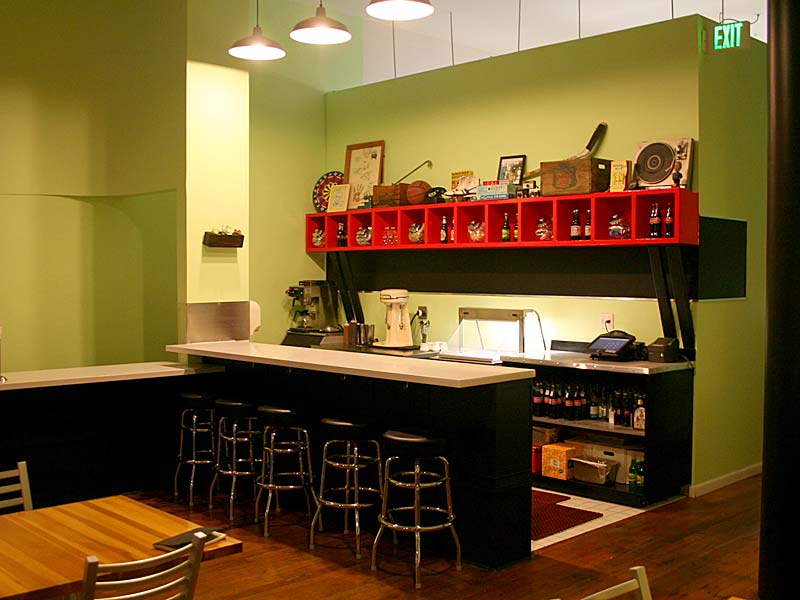 On the wall behind the bar are cubbies full of nostalgic items almost entirely culled from the Nudelmans' personal collections and those of their family members. Board games, roller skates, sports equipment, and plenty of other playful items fill the wall, and Matt and Stefanie can tell you the meaning behind each of them. 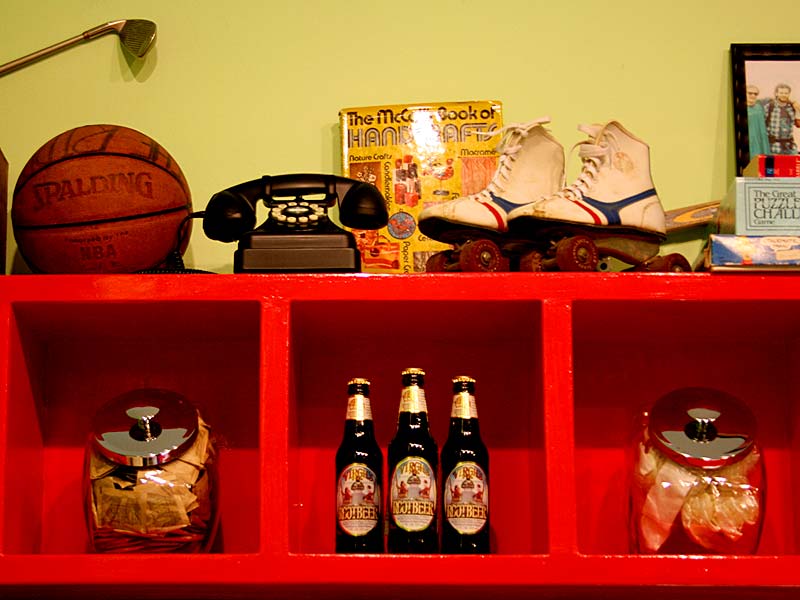 In the rear-right corner of the restaurant, there's a condiment station fashioned from an old Coca Cola cooler. The idea behind the station was to cut down on waste. Stefanie explains that not everyone wants lettuce and tomato on a burger, for example, so putting them on top means a lot of food gets thrown away. By letting the customers choose their toppings themselves, it ensures that food won't be needlessly served and discarded. 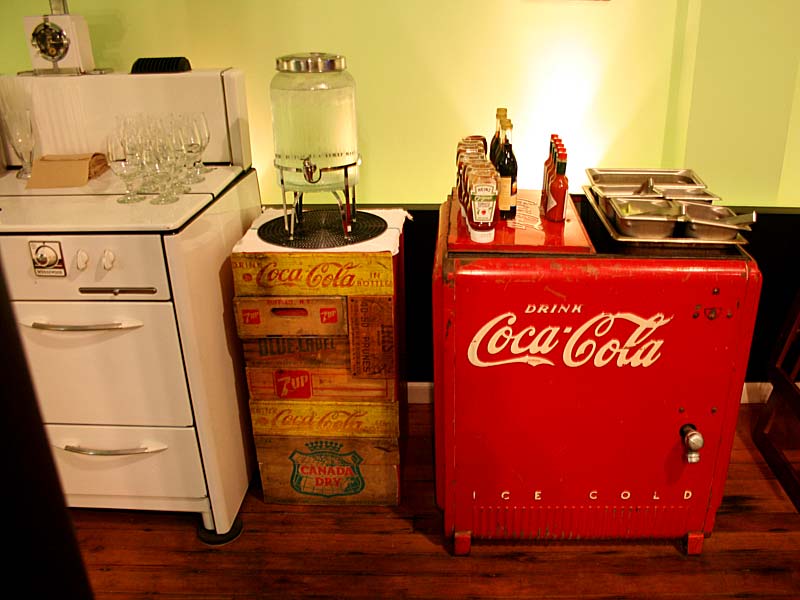 There's also a suggestion wall, featuring a chalkboard map of the country, encouraging customers to leave a requested food item in an appropriate location. A visitor from somewhere near Tahoe apparently wants curly fries, and another wrote "crab cakes" near the Virginia/North Carolina border. Greenburger's plans to incorporate new regional dishes into their menu from time to time. 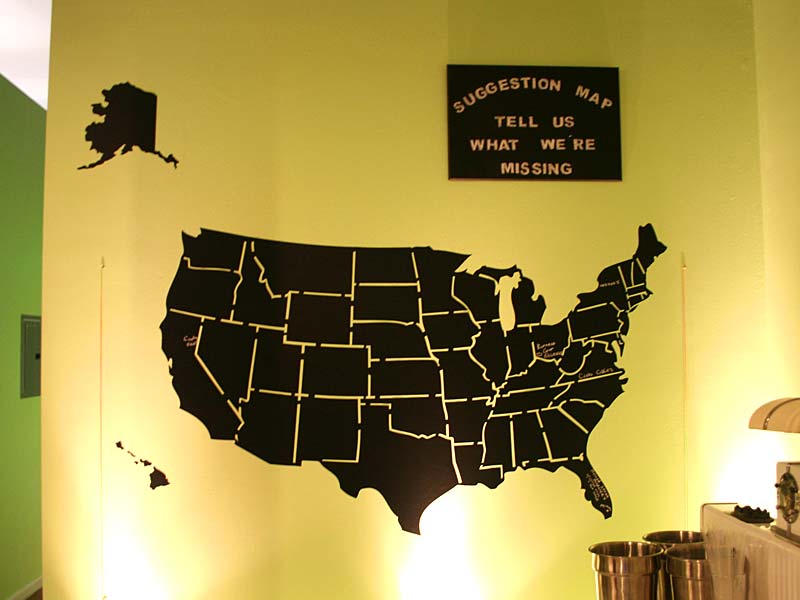 Speaking of which, let's talk about the menu. As Stefanie sums it up, the idea behind the menu was "new takes on their favorite dishes. " Ingredients are organic and come mostly from local vendors. They've also made an effort to partner with socially-responsible sources. Their ham and bacon, for example, come from Zoe's Meats, which donates a portion of proceeds to the school of your choice (Greenburger's chose the John Muir School at Oak and Webster). So, the menu. There are salads — a chef, a caesar, a mixed greens. There are burgers and sandwiches, including: The Burger ($10) Our signature Five Dot Ranch patty on a brioche roll. Add cheddar, Swiss, jack, feta or bleu cheese, sautéed mushroom or onions at no charge! House Made Greenburger ($9) Made from organic black beans, beets, oats, brown rice, and spices on a brioche roll Add cheese, sautéed mushrooms or onions for no charge! Cobb Burger ($9) LA's original salad made Greenburger’s way Grilled organic chicken breast, bleu cheese, Zoe’s bacon, avocado, lettuce, and 1000 Island dressing on a soft roll Greenie's Turkey Club ($9) Fresh roasted Diestal turkey breast, Zoe’s bacon, lettuce, tomato, and house made mayo on Texas toast Memphis Style Pulled Pork Burger ($9) American Homestead pork shoulder braised in house made barbeque sauce topped with coleslaw on a brioche roll 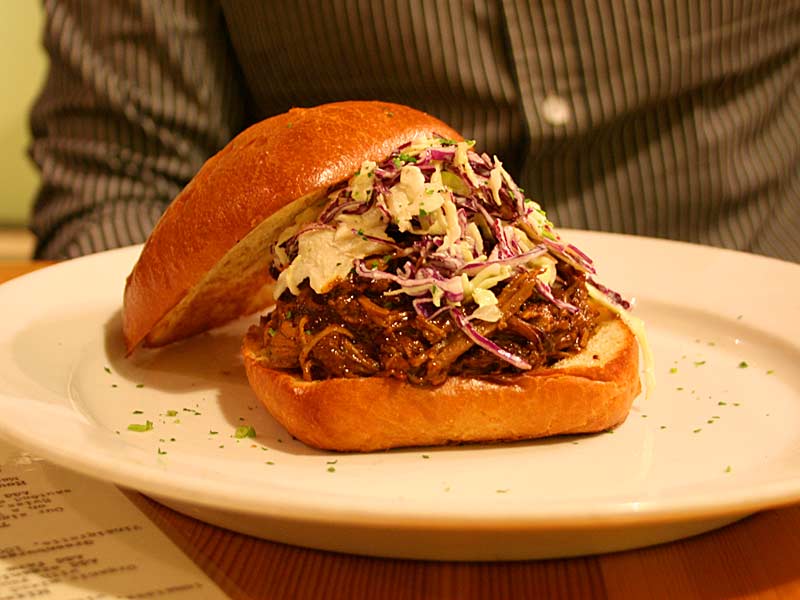 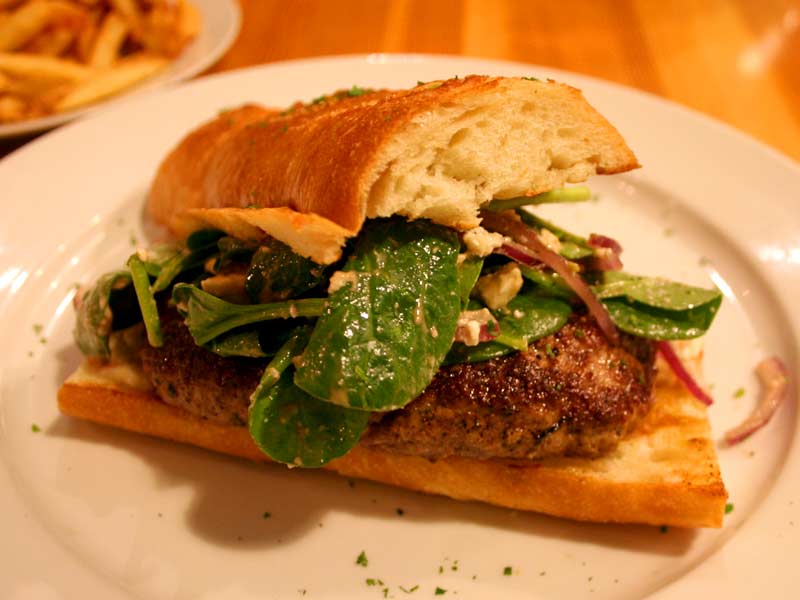 There are also larger entrees, like Barbeque Short Ribs ($14.95), Greenie's Thanksgiving Dinner ($14.95), Cooked to Order Meatloaf ($14.95) and "Chicken" Fried Tempeh ($13.95). And there are a bunch of sides — mac 'n' cheese, sweet potato fries, buffalo wings, and the like. Also, importantly, there are milkshakes. Chocolate and vanilla will be available every day, plus a seasonal flavor that will change frequently. When we visited, it was Bananas Foster (and it was amazing). The milkshakes are made using this vintage machine right here: 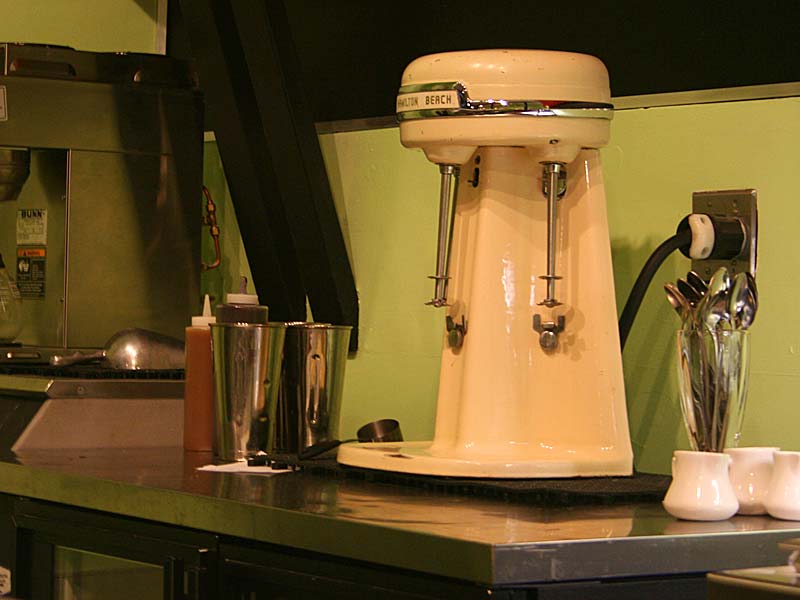 Finally, Greenburger's offers a selection of soft drinks from small local labels and rare brands. They've opted not to get bogged down in the pursuit of a liquor license (at least not yet), so there's no beer or wine on the menu. For now, Greenburger's will be open 6 days a week (closed Tuesdays), from 11am to 10pm. Eventually they aim to serve brunch, and at some point might consider local delivery, but for now, the goal is to just get things off the ground and see how they go. From what we've seen (and tasted), we have a feeling things are going to go quite well.
Neighborhoods
Lower Haight