DISCLAIMER: Tours to the top of the San Francisco City Hall dome are not available to the public. Tours are only conducted for elected officials and for inspections. We were just lucky enough to tag along on one such inspection tour.

No matter where you walk in Hayes Valley, the gold gleam of the San Francisco City Hall dome can be seen in between the concrete apartment buildings. 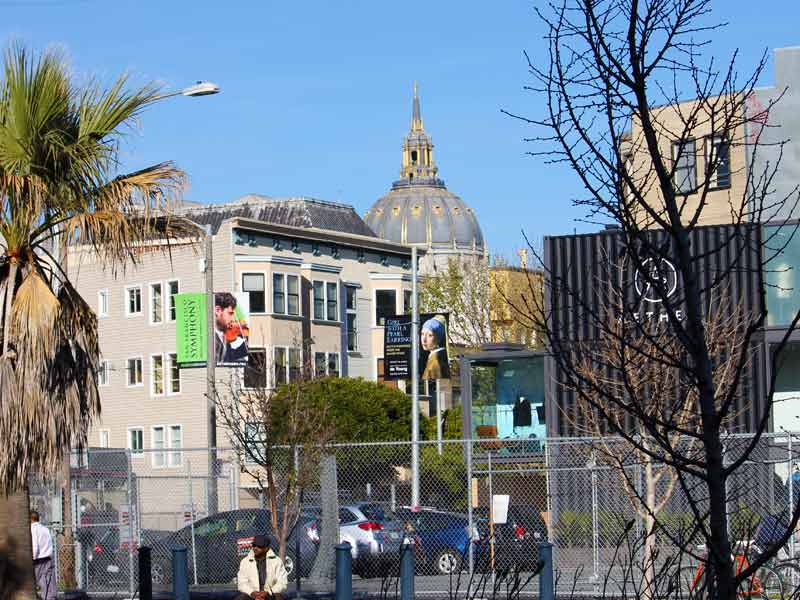 It's a signature part of the Hayes Valley skyline either day or night, but especially when it’s illuminated in varying colors for holidays and special occasions (prepare for a green hue in celebration St. Patrick’s Day starting tonight through Sunday evening). It's almost so synonymous with the everyday horizon that it can be easily missed, but have you ever wondered what the view is like looking at Hayes Valley down from the dome? We sure have.

As luck would have it, we were able to join Robert Reiter, City Hall's Building Manager, for an inspection tour of the dome. Rob has been the Building Manger for the last three and a half years, and he is any San Francisco history buff's best friend. His enthusiasm towards the building and his knowledge of the architecture are unrivaled. For instance, as Rob quizzed us, did you know the 1989 Loma Prieta earthquake caused the dome to twist off its base by a few inches? Neither did we.

Despite this 4-inch shift, the dome stands at a soaring 307 feet and 6 inches (5th highest rotunda in the world, if you want to brag), so in order to make our trip a little less daunting, Rob showed us a wooden model of what to expect. 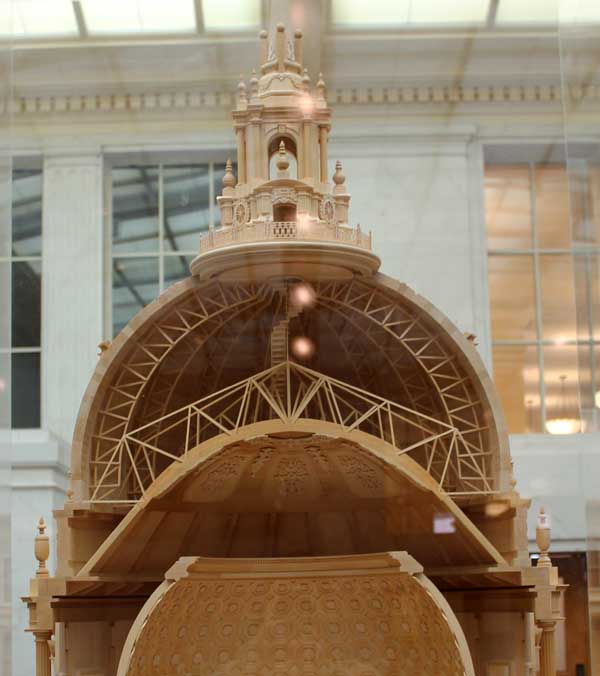 "The staircase you see going from the colonnade level to the second tier is enclosed, unlike what you see in the model," Rob reassured us.

We quickly learned that underneath its iron exterior are three domes. The innermost dome is made of cast plaster and has a hole in the center, surrounded by tall columns. The second part of the dome is a false ceiling made of wood and other hairy material (we’ll explain shortly). The third layer is the outer dome that can only be seen from the outside of the building.

After Rob fully mapped out our journey for us on the model, it was time for us to make our ascension. Our journey to the top started at a rather cockeyed door: 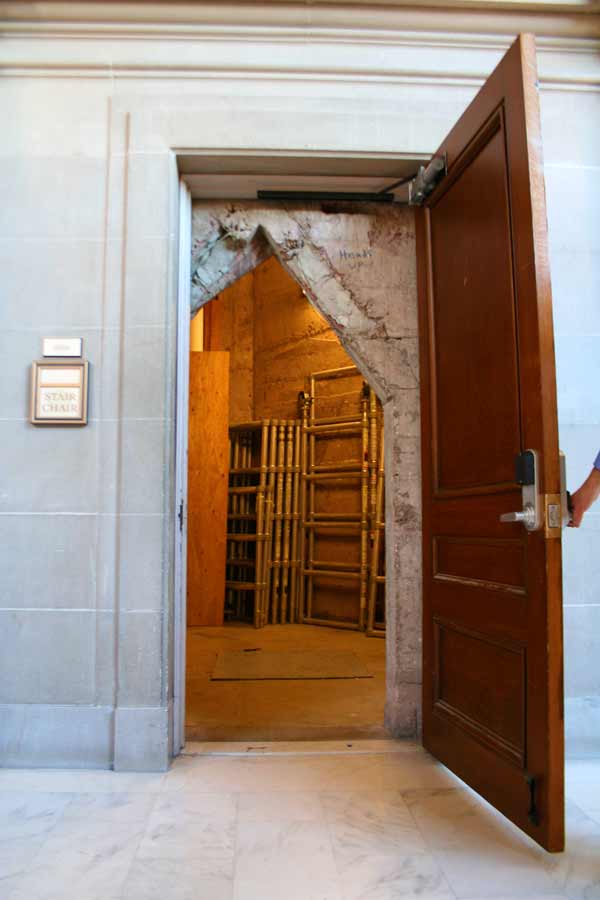 As we twisted our bodies to fit through, we greeted the first set of spiral staircases we were going to see on this 256-step journey. 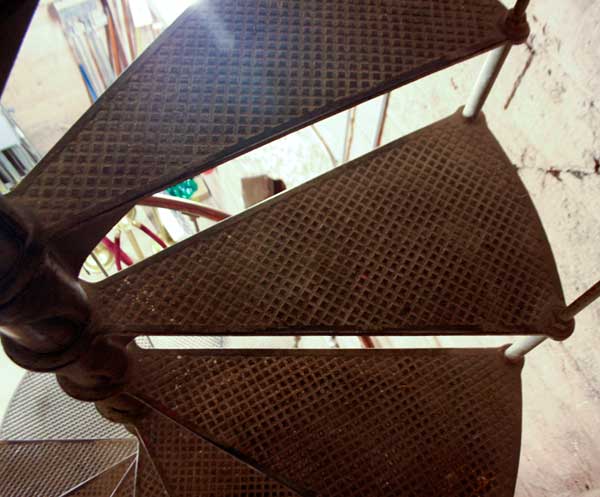 We first arrived at the colonnade, which you can see from the City Hall lobby and staircase. Its perimeter is lined with columns and matted windows that draw in a muted daylight. 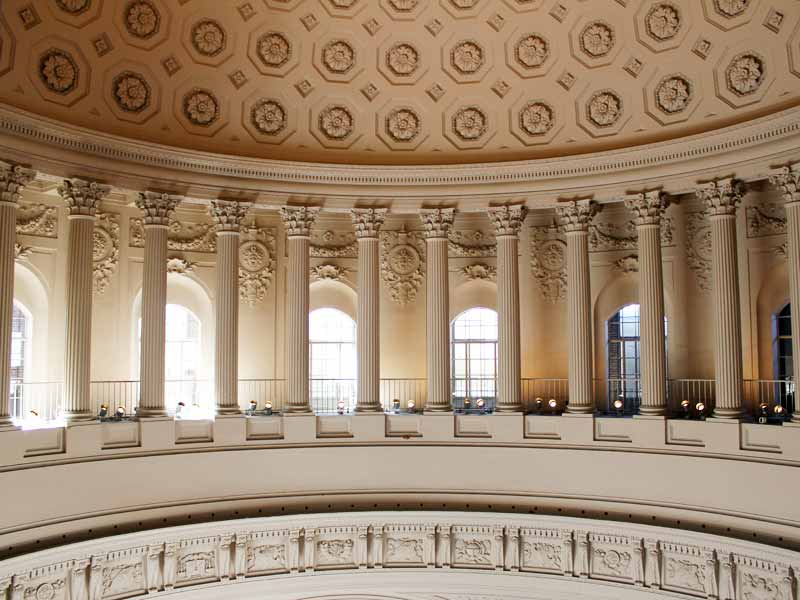 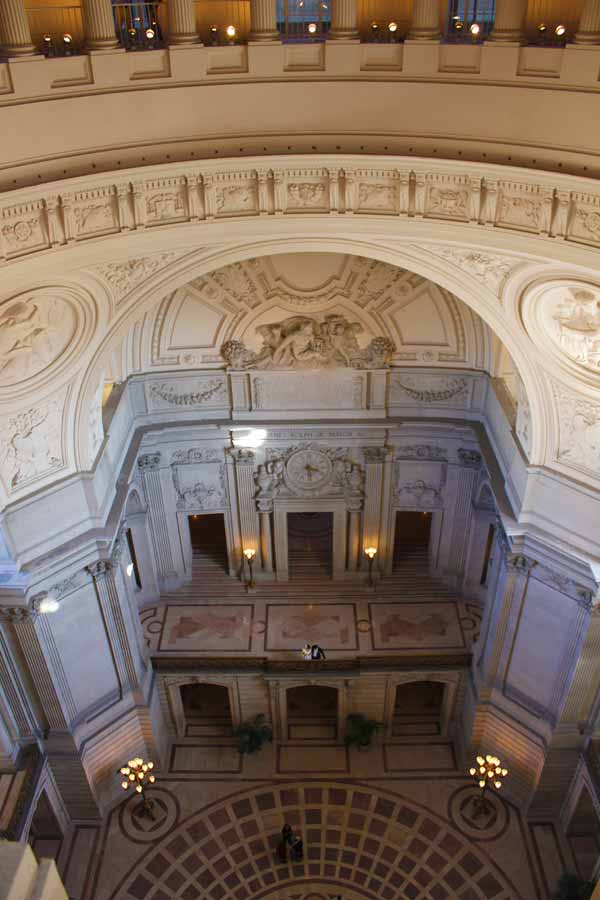 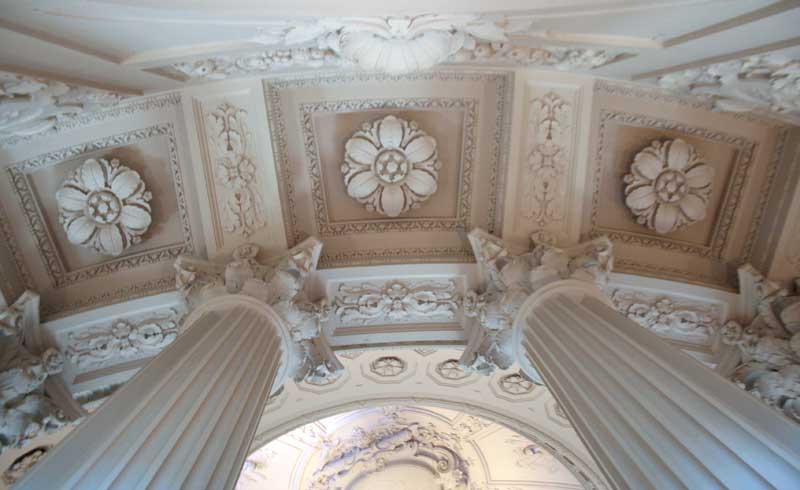 The soaring cathedral ceilings are encrusted with Dahlias, the official flower of San Francisco, that are blossoming as they descend towards the foyer below. 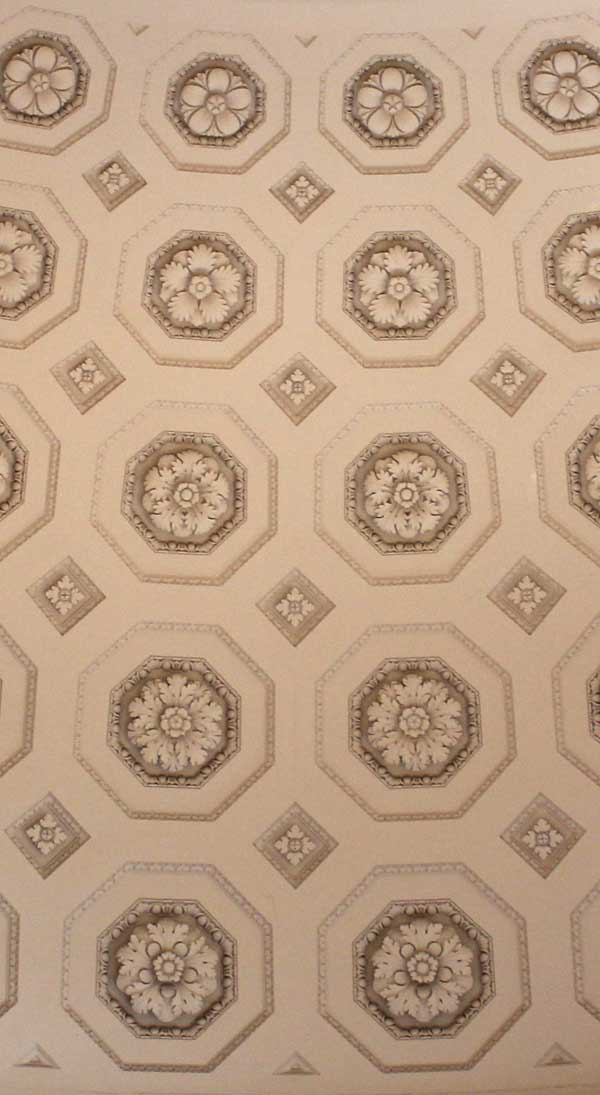 Behind this immaculate detailing is a rough outer edge. It was this part of our journey that we really felt like were stepping back to the turn of the 20th century. 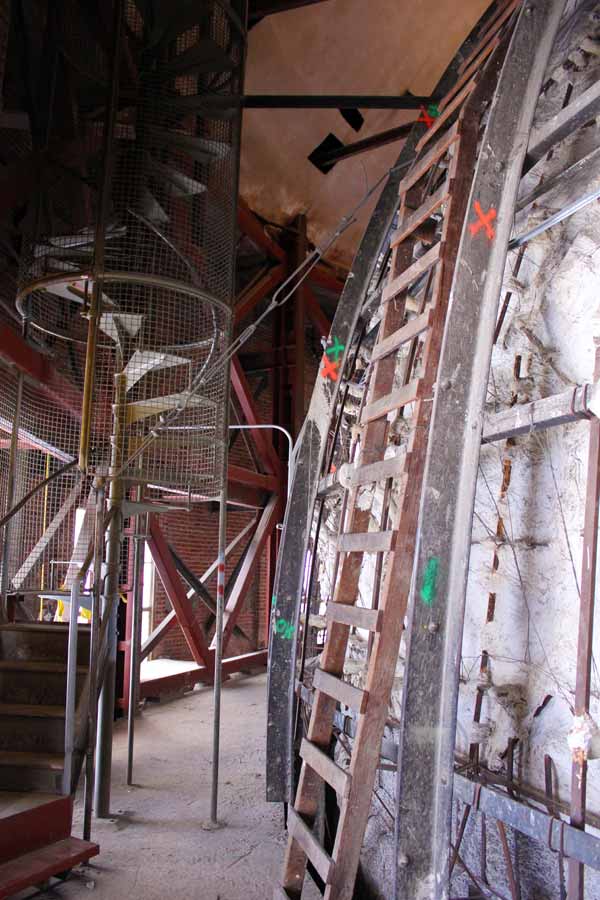 Handprints from the craftsmen from more than 100 years ago are literally suspended in a plaster casting. If you examine closely enough, you can see where the workmen scooped the molding into place.

There were also tufts of something... wiry. "Could that be hair?" we wondered. 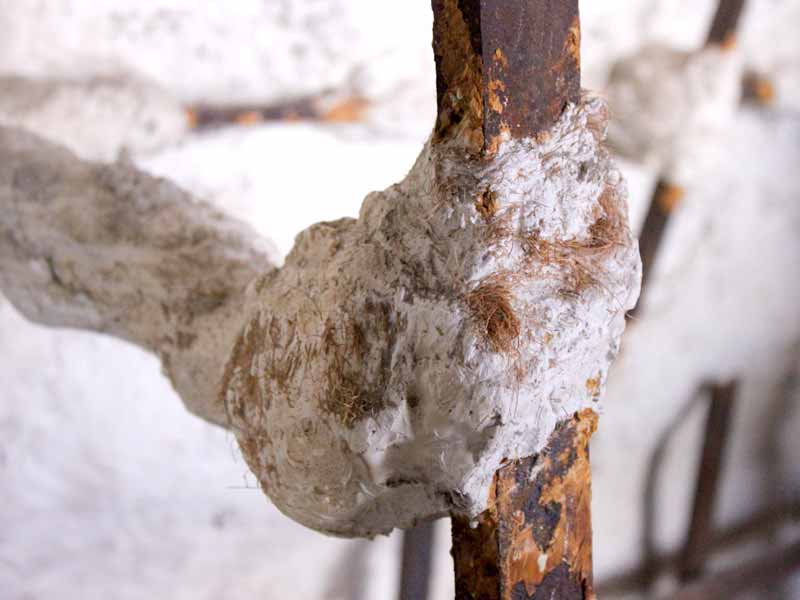 Indeed, it was hair — horsehair to be exact. Why in the world would horsehair be in the plaster of our city hall dome?

"Back in 1915, the way they brought rigidity to the plaster was they mixed in horsehair to strengthen it," Rob explained. "If it [the dome] was rebuilt today, it’d probably be made of fiberglass. Every place you see plaster in the building, there’s horsehair that they swirled it in there to add structure, because otherwise it’d just drip down."

Rob assured that horses back then were a commodity, and often used for a variety of purposes, like glue, clothes and even food (horse meat tacos, anyone?). 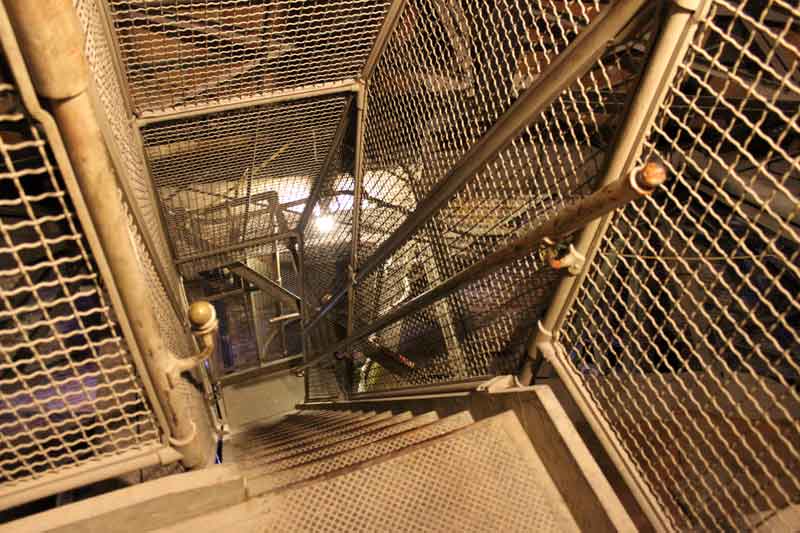 After taking a moment to digest the bit about horsehair, we continued up the last spiral staircase into an enclosed walkway that what reminded of a mineshaft. The walkway took us directly over the horsehair level and to a ladder where we could feel a weak gust of cool air. 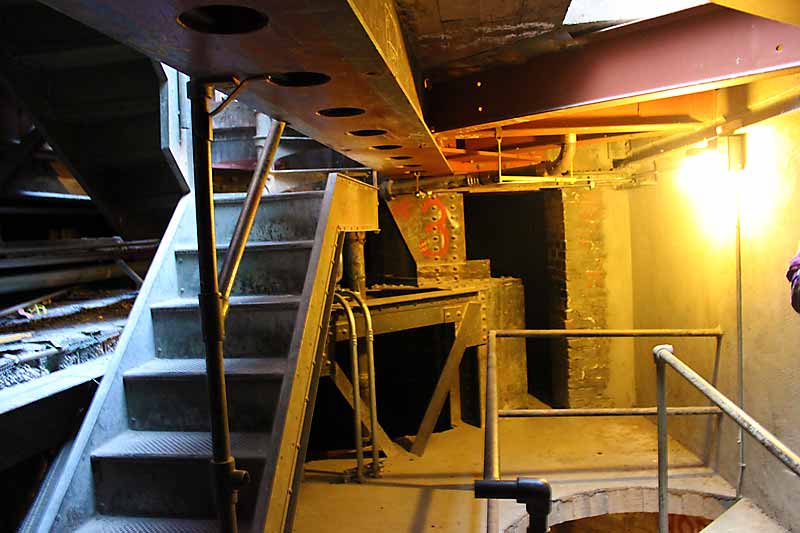 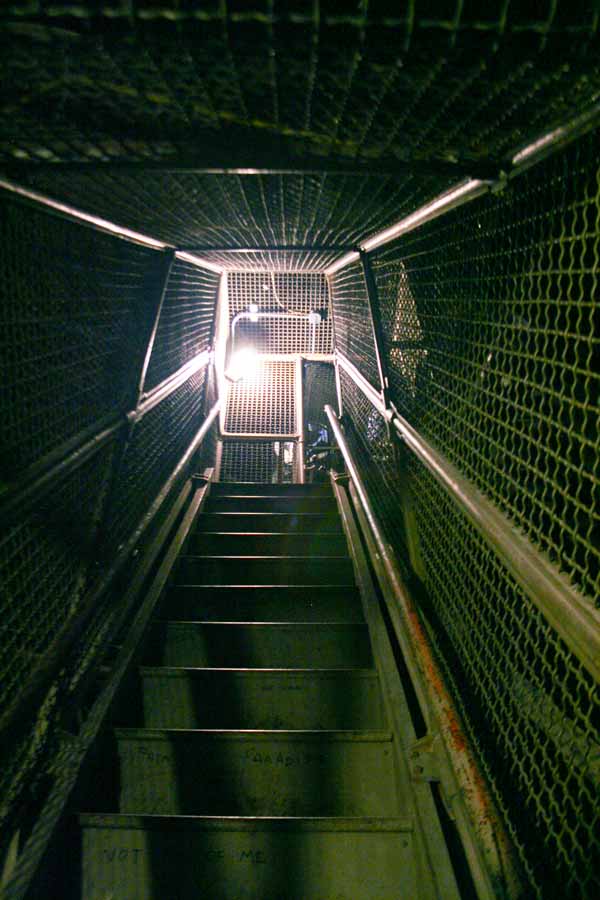 At last, we had finally made it, and we could see daylight. 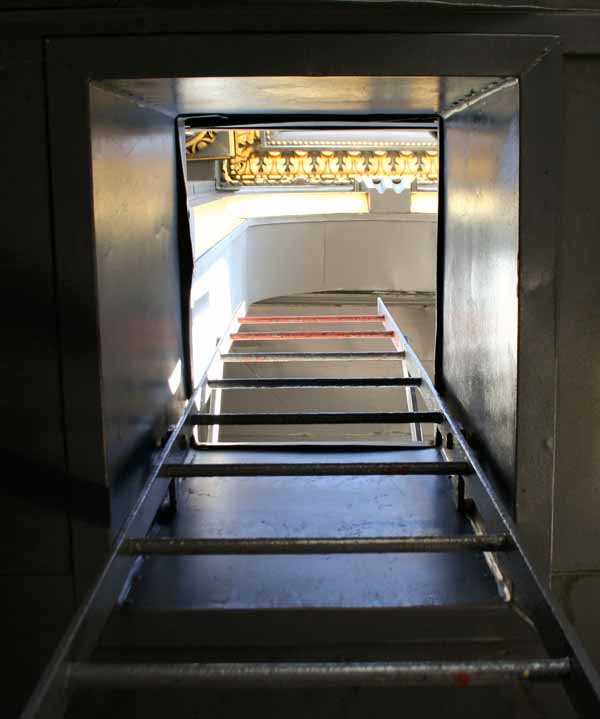 As we arose from hatch into a glass-plated entryway, we were blinded by the sun shining on this particularly brilliant afternoon. 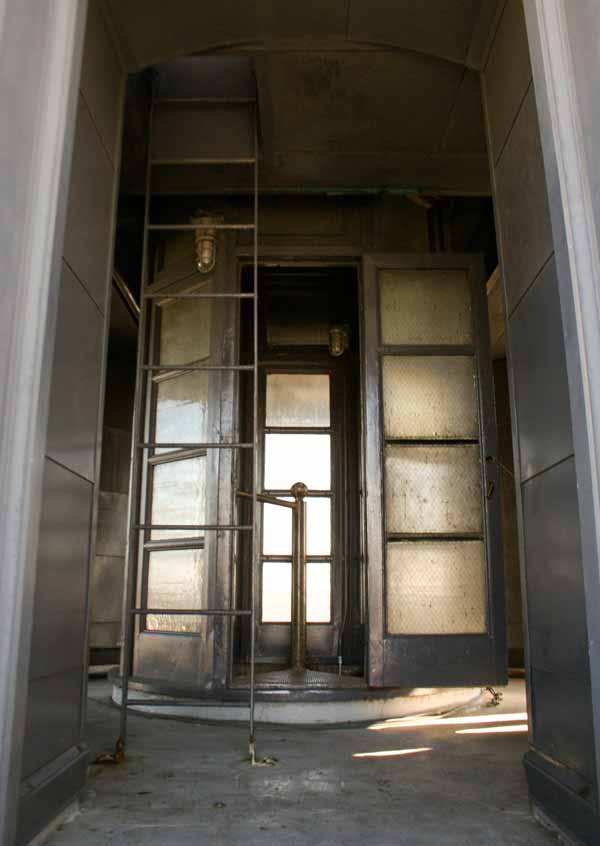 With our eyes squinted, we pressed onwards to the iron balustrade, a 3-foot wide walkway. This path around the near tip-top gave us a 360-degree view of San Francisco. Everywhere we turned there was a San Francisco landmark, including Hayes Valley’s very own Patricia’s Green. 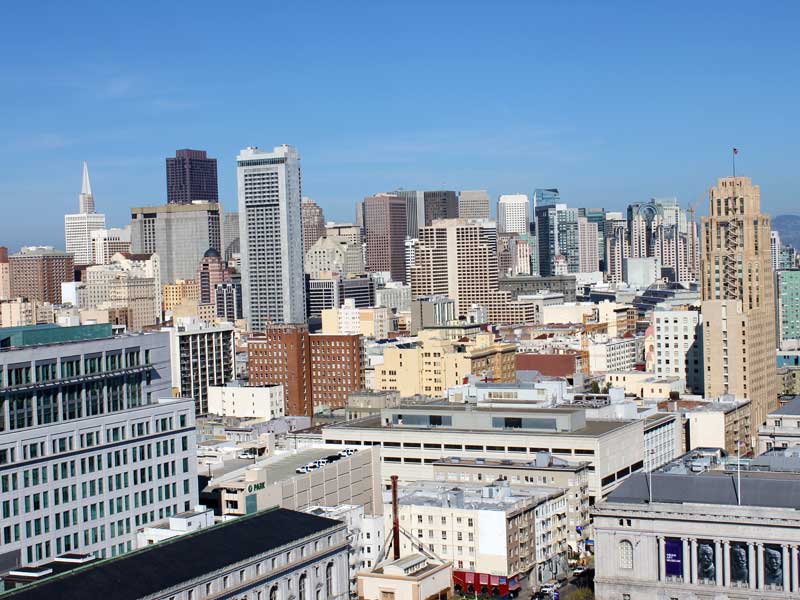 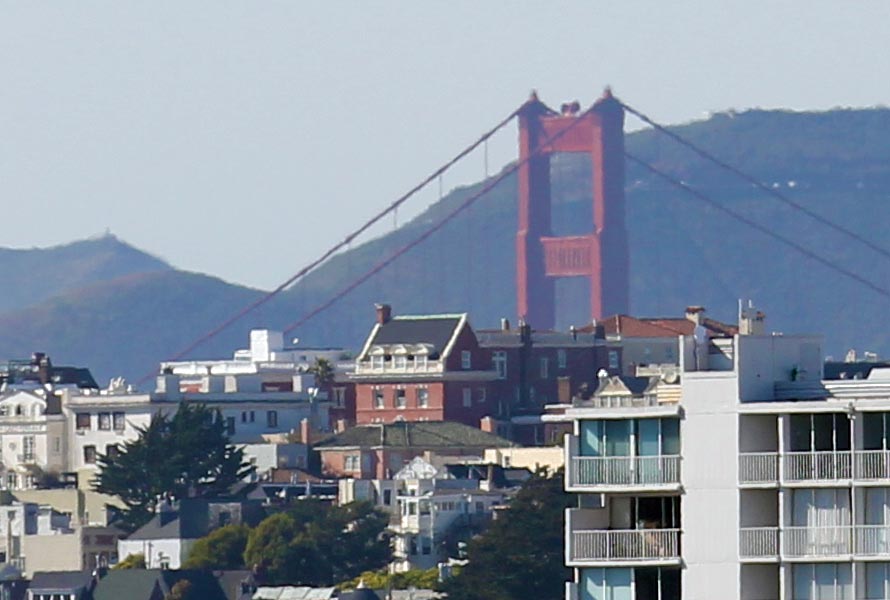 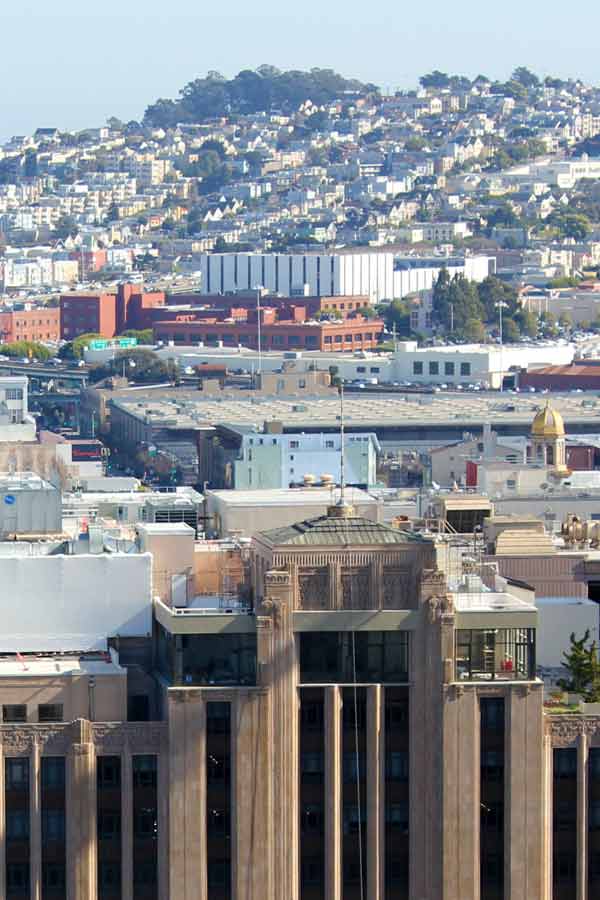 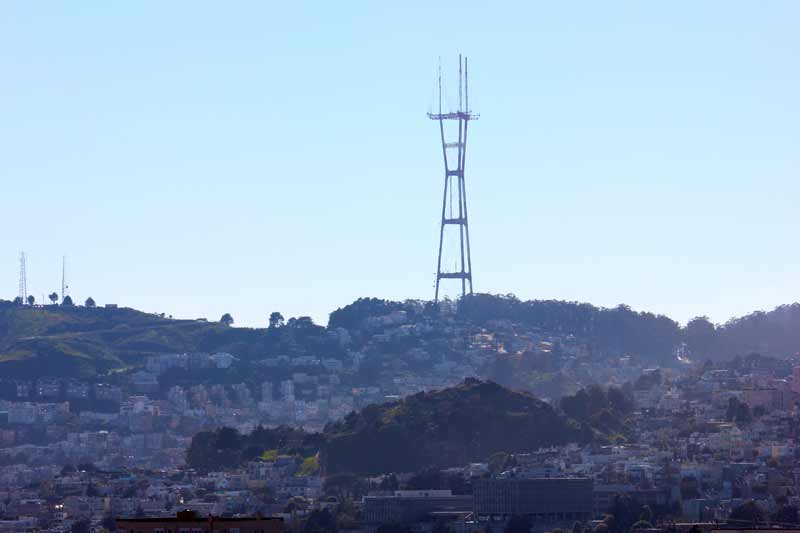 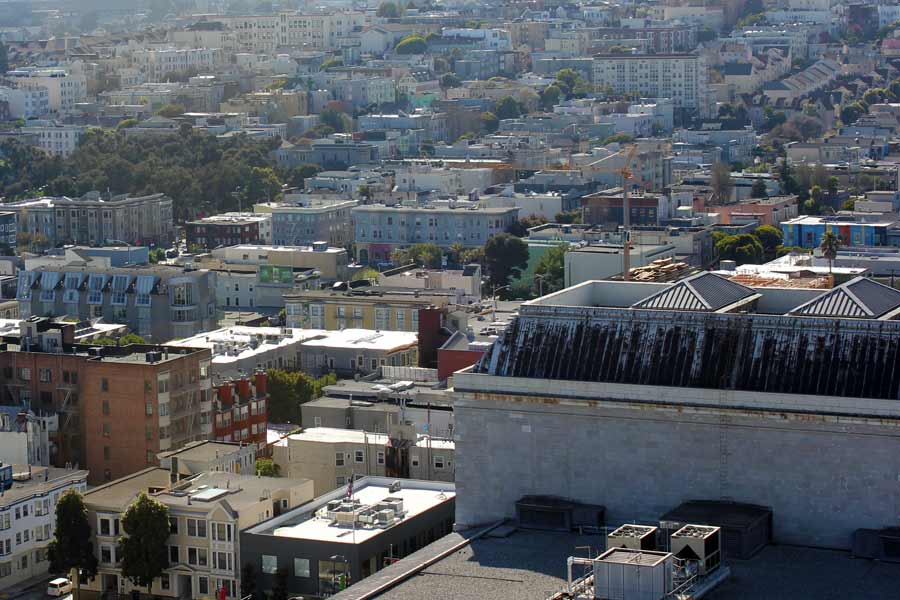 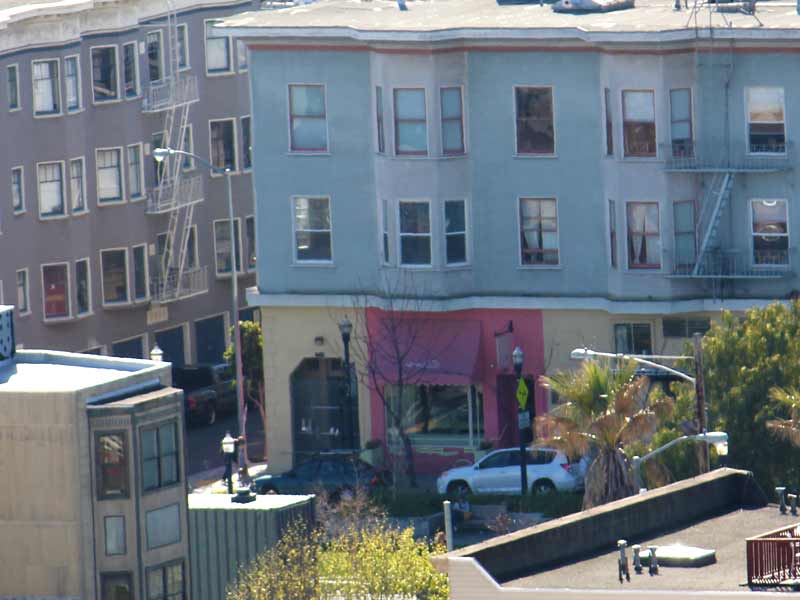 Initially, these SF jewels dominated the view, but as our attention retracted to our more immediate proximity, the real scene-stealer for us was the gold-plated detailing (yes, that is real gold) that was added during the restoration between 1995 and 1999. 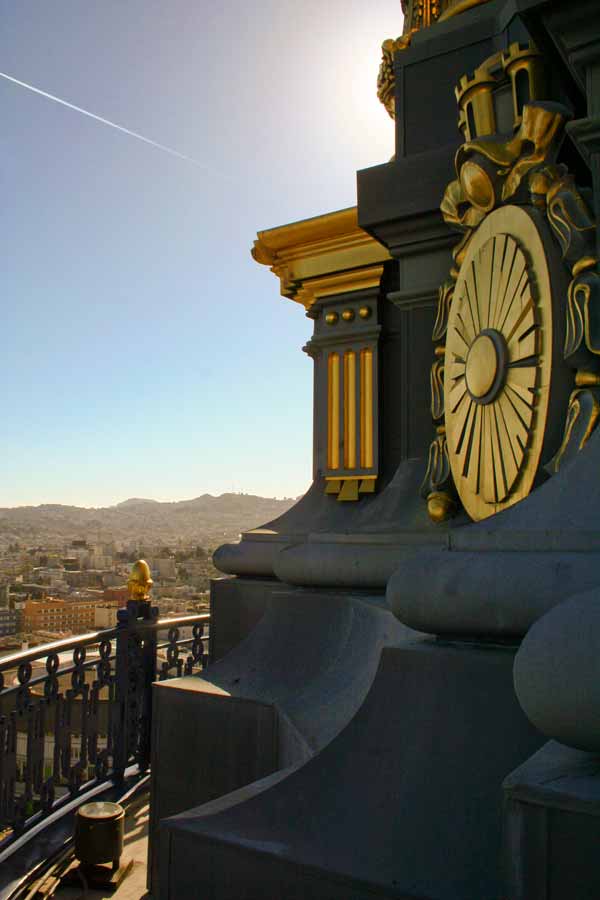 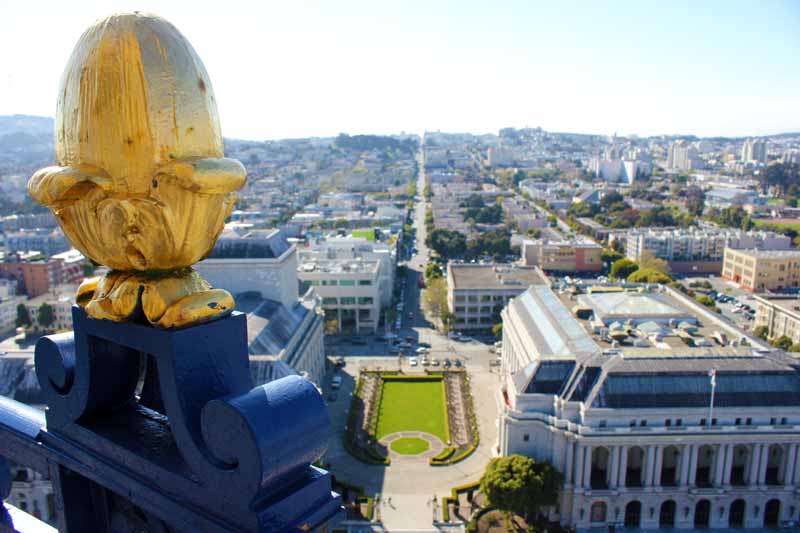 The golden moldings go all the way up near the steeple, right past the dome’s torch (more of a beacon, really).

On this torch level, there are four enormous urns that obscure most of the skyline, but don’t make the city-gazing any less breathtaking. 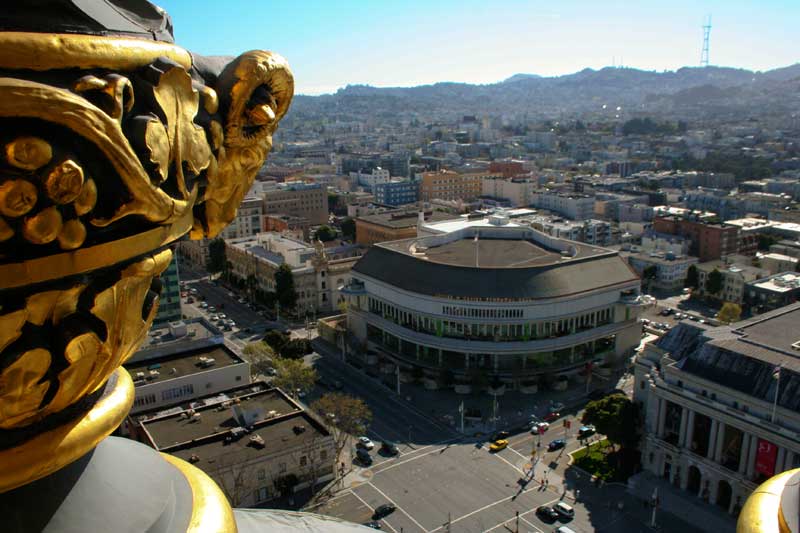 As we took one last gander of the city sprawled out before us, we paused to soak in one last view of our home, Hayes Valley How small but bustling it looked from this height. Our curiosity had been answered. Now, when we see the golden steeple rising from in between buildings, we’ll know exactly what it’s like standing there looking down. 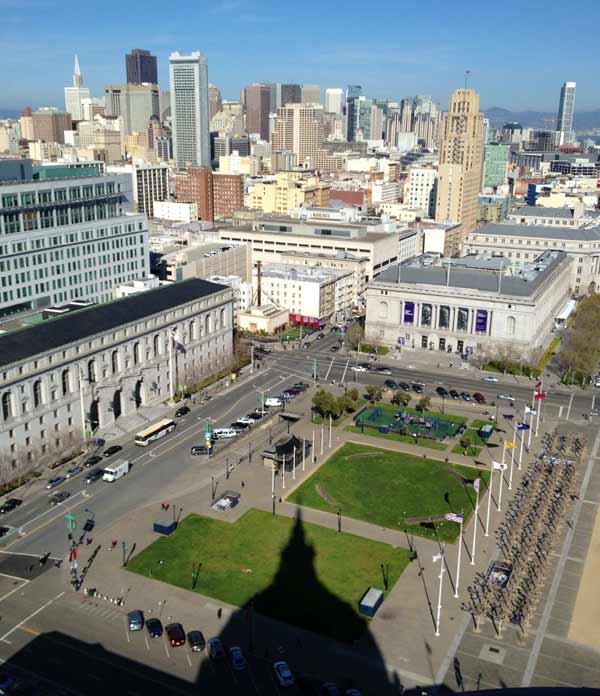 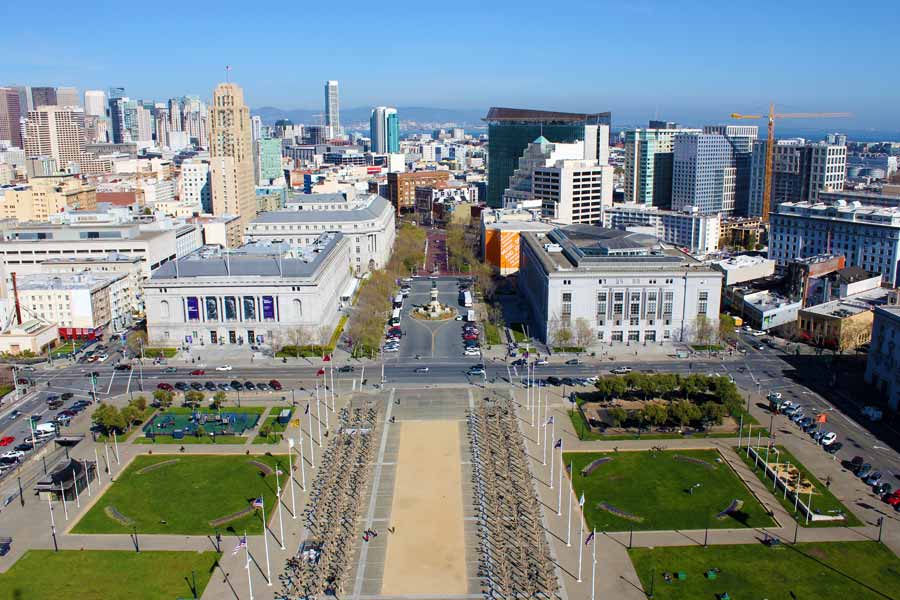 Thanks to Rob Reiter and Supervisor London Breed's office for helping arrange our amazing visit to City Hall. Check out more photos from our tour to the top on our on Facebook page.