By Ryan Curran White - Published on June 17, 2013.
San FranciscoHayes Valley
Shortly before Hayes Valley Farm vacated its location on June 1st, we stopped by and interviewed its co-founder, Jay Rosenberg, on the Farm's origins, its philosophy, and the road ahead.

Of the collection of people you might have seen at Hayes Valley Farm (HVF) over the last three and a half years, Jay Rosenberg might just be the most recognizable. Nicknamed Jay "Blue Tape", he was almost always seen with -- you've probably already guessed it -- a roll of blue construction tape around his arm like a makeshift bracelet. You also might know Jay from his beautiful blonde pooch that bounds towards visitors to give an inquisitive sniff -- that's his dog, Callie. 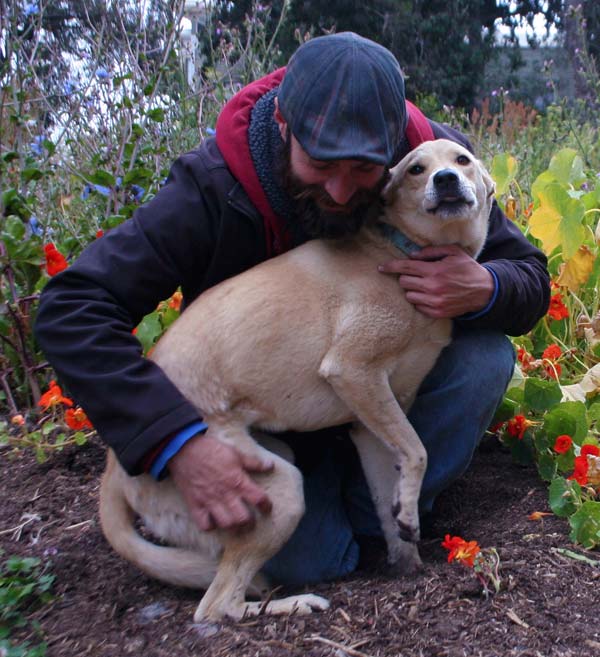 Jay’s passion for the farm and permaculture are evident within seconds of meeting him. It makes sense that he co-founded the farm. His brown eyes widen as he explains the biology at play with the foliage surrounding him.
Jay's Roots
The 38-year-old Jay is not a native of Hayes Valley or even San Francisco. He hails from Levittown, New York, and moved to Miami when he was 13 years old. In college, he studied computer science at the University of Miami. Upon earning his degree, Jay relocated to Chicago for a position at a hardware and software company that worked with investment banks -- a far cry from his days of digging through the dirt with his bare hands. "At 29, I got kind of burnt out and I didn’t want to work in tech anymore," Jay admitted to us. "A friend of mine quit a year earlier and bought a piece of land in Maui and had amazing permaculture designers come through to make it sustainable. He used to write me and taunt me. He'd tell me to come to Maui and live off the land. It took me almost a year to succumb to that." After dealing with this torment, an opportunity presented itself and enabled Jay to shed his suits and exchange them for overalls in Maui. During his yearlong stint in Hawaii, Jay was in the presence of some influential farmers whose teachings would rub off on the impressionable would-be farmer. "I learned from being there. It was more osmosis than lessons," Jay explained. "There was no class, just living in the same space as people who know what they are doing." Jay's time in Hawaii was the catalyst that led to where he is today. After about a year of living off the land in a "tropical paradise," he began missing the city and, most of all, people. Jay landed in San Francisco in 2005. He immediately sought out permaculture design programs. He ended up going to the Permaculture Institute of Northern California in Bolinas where he earned a Permaculture Design Certificate (PDC) in June 2005. Without many options to utilize his new degree, Jay began volunteering as a teacher’s assistant to Chris Burley with the Urban Permaculture Institute of San Francisco. His pet project was to help with the construction of a community garden and permaculture educational center at 18th and Rhode Island. The success of this plot of land became noteworthy in San Francisco, and it eventually gained the attention of then-mayor Gavin Newsom and his Office of Economic and Workforce Development Team (OEWD). The mayor’s office contacted Chris and Jay about implementing a similar program for what they did to 18th and Rhode Island for an interim use farm on a desolate overpass in the heart of the city. "[Chris, David Cody, and I] wanted to activate a community space for education, participatory research and volunteer spirit," Jay said.
Cultivating Rubble into a Farm 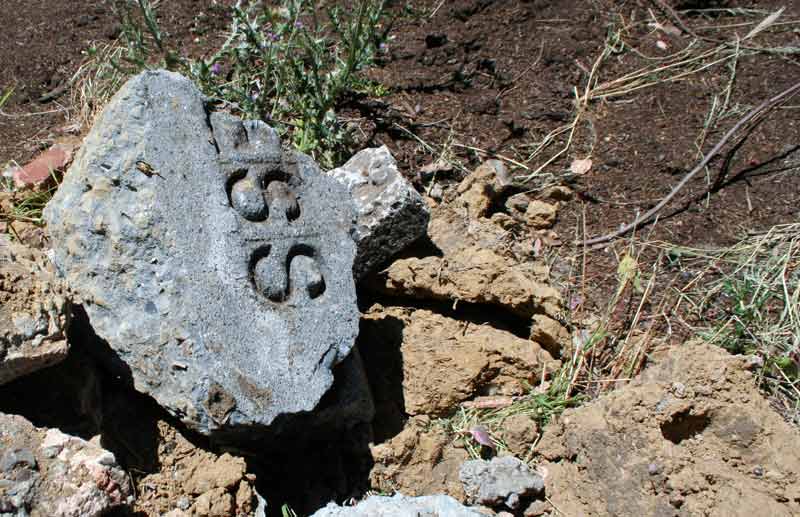 To say the two parcels of land at 450 Laguna between Oak and Fell needed a green thumb would have been an understatement. The destruction of the Central Freeway north of Fell in 1992 left a wasteland of rubble and ivy that also attracted drug use and homeless encampments. 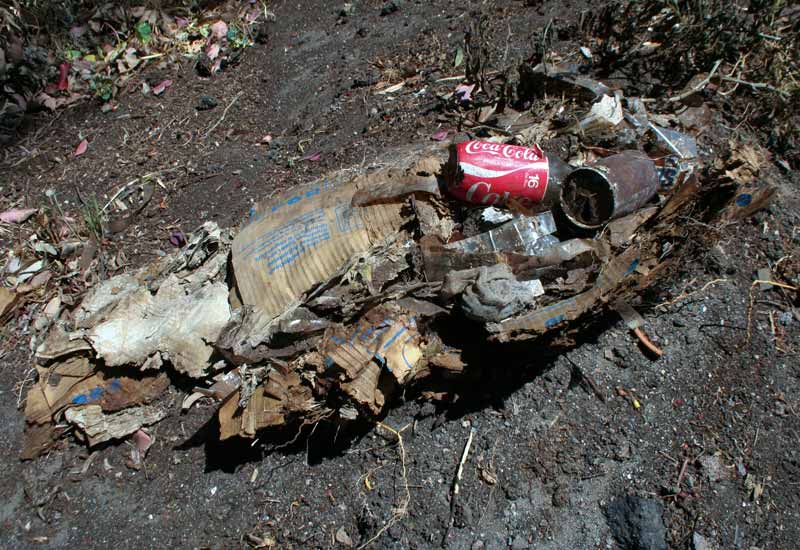 After reviewing the land with the OEWD, they determined a farm couldn't be built as a for-profit venture selling produce, but they could turn the space into a sustainability center, and give away vegetables for free. 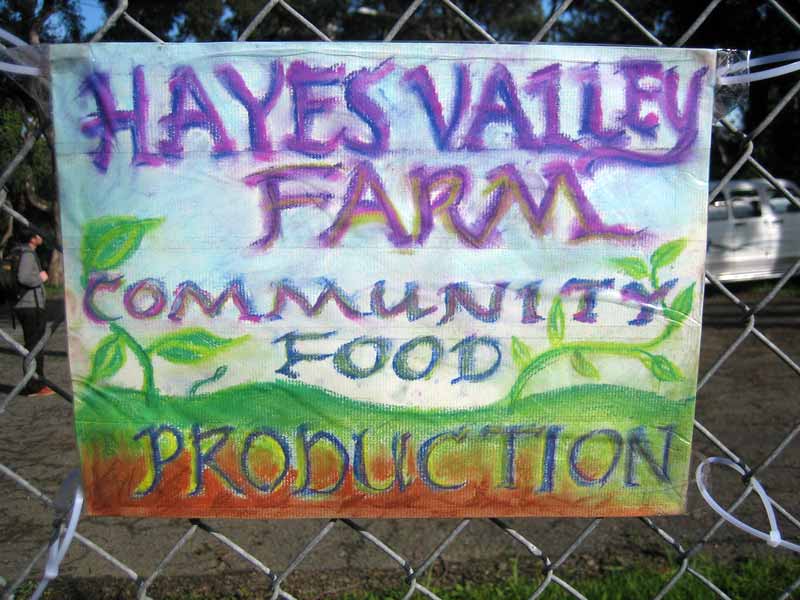 Flickr/Hayes Valley Farm
The idea was not to create a well-manicured farm, but to allow plants to co-exist symbiotically. To start anew in this almost post-apocalyptic landscape, they did some sheet mulching, using cardboard, horse manure and mulch. “It was kind of a dirt cake,” Jay joked. 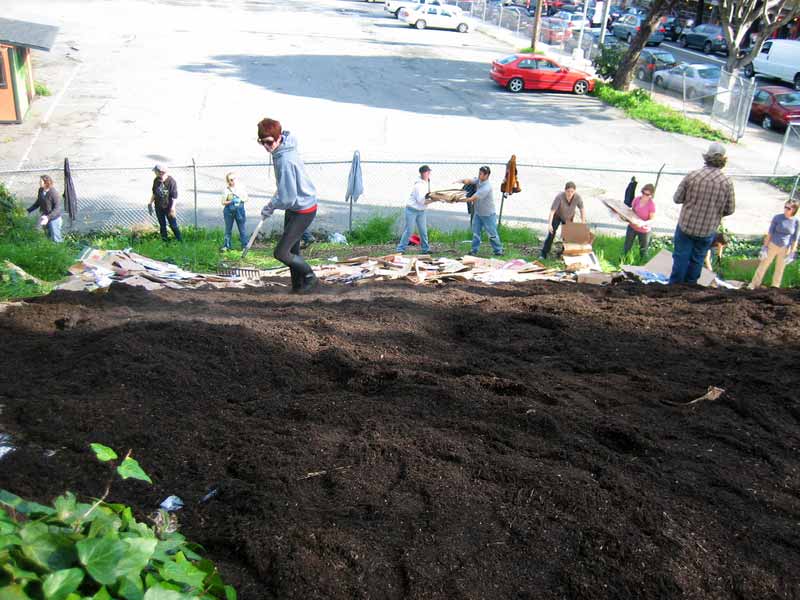 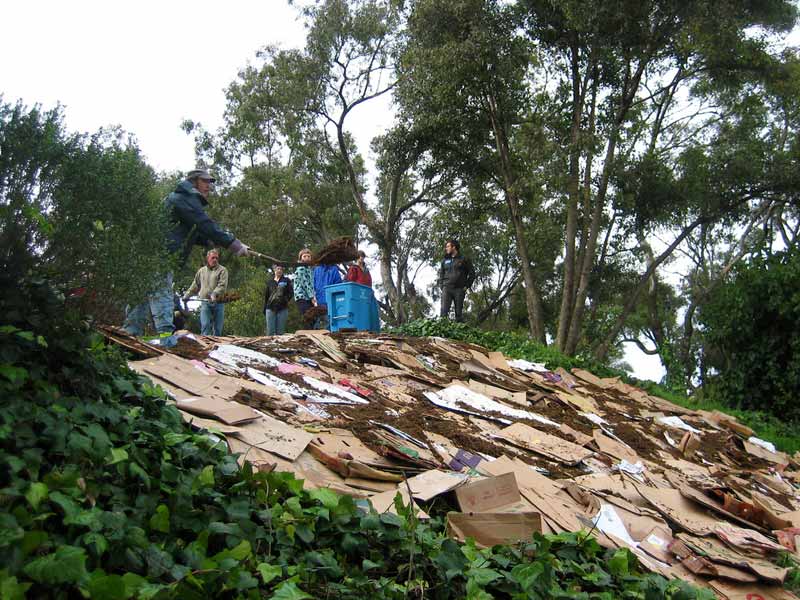 Flickr/Hayes Valley Farm
With the help of an army of volunteers, they were able to use this process to cover both parcels. “You can work with nature and design it like the forest,” Jay said. “It takes a normal forest 500 to 1000 years to build that inch of soil we created. By three years of layering cardboard, horse poop and wood chips, we encouraged the microorganisms and root-growth to happen.” Finding a way to add nutrients to the freshly planted soil was a relatively easy fix for these urban farmers. They planted an abundance of fava beans, which would produce nitrogen nodules on their roots. After some crafty cutting of the plant above ground, the roots would retract, leaving these nodules in the soil for other plants to utilize for growth (as shown by Jay in the photo below). And thus, the soil above the freeway became able to support life. 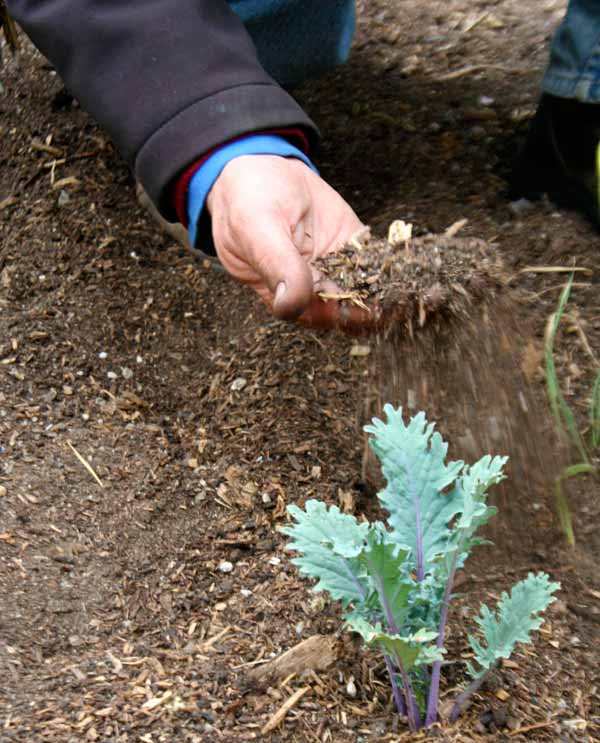 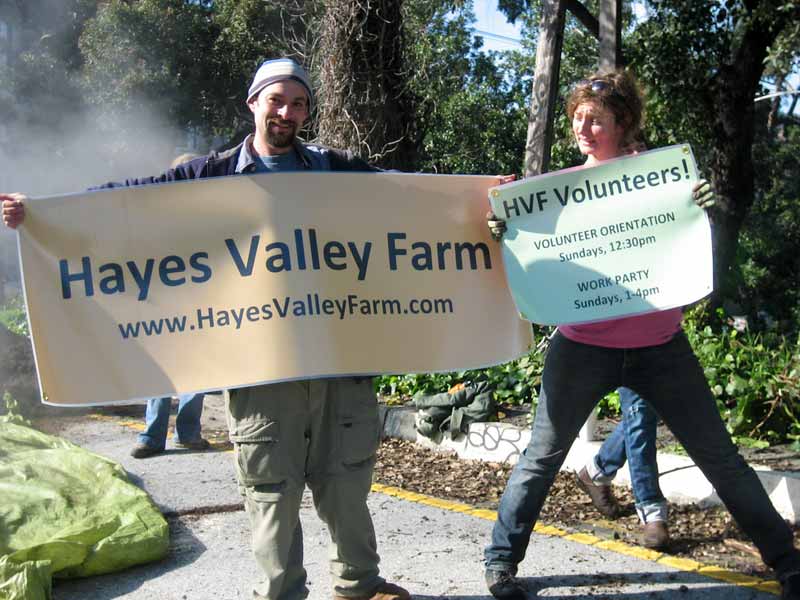 Flickr/Hayes Valley Farm
This nutrient-enriched soil was literally the foundation of Hayes Valley Farm's growth. Through the hard work of many volunteers, the farm became an urban jungle for visitors and Hayes Valley residents to enjoy. That's why the closure of HVF on June 1st hit some volunteers and Hayes Valley residents harder than others. One volunteer named Yukie, who had been with the farm for 2 years, mentioned to us that she'll miss coming to "the forest for spiritual reflection in the city." Daniel Farnan, who was a volunteer from the beginning, did the murals and lot of the art at the farm. Daniel was a little disappointed that the farm's time was up after just three and a half years. "A 5-year program is fine for what the permaculture design that was implemented here can do, but now that we're at year 3-and-a-half plus, everything is just starting to do what it's supposed to do. Little tiny food forests are beginning to form." However, the short shelf life of the farm was part of the plan all along. That’s why Daniel and Jay are happy to bow out with their heads held high, ready to apply their knowledge to the next piece of land begging for revitalization. They've been able to successfully spread HVF's successes to other urban agriculture projects, including helping growing the San Francisco Seed Library. "It's been like a dynamic classroom for everybody." "One of things we wanted to do from the beginning was demonstrate what was possible with what an old freeway could look like with a couple years of work. And that's the good news, it doesn’t take a lot of time, it doesn’t take a lot of funding, or a lot of resources to create biodiversity spaces that are loved by the communities around them, but they have to be done at the right time and the right place." Along with a supportive community, Jay acknowledged that a project like the farm couldn’t have been possible without the help of City Hall. "Successfully walking away is part of the interim use agreement. The trust is here that it works and that we want to do this again, and if you were afraid it's a dangerous proposition to get in an interim use agreement with a farm in fear that they wouldn't leave or chain themselves to the tree, watch as we leave elegantly, cleanly and joyfully." Like seeds scattering in the wind, Jay has been working on applying the lessons learned at HVF to every square mile of San Francisco, through his organization 49 Farms. He has also spread physical pieces of the farm, such as the beehive and greenhouse, to different neighborhoods. Other legacy projects include: Beecology, The Bee Farm, Bloom Justice, BRANCH / Youth Education, Please Touch Community Garden, The Potrero Hill Learning Garden, and Urban Commons SF. 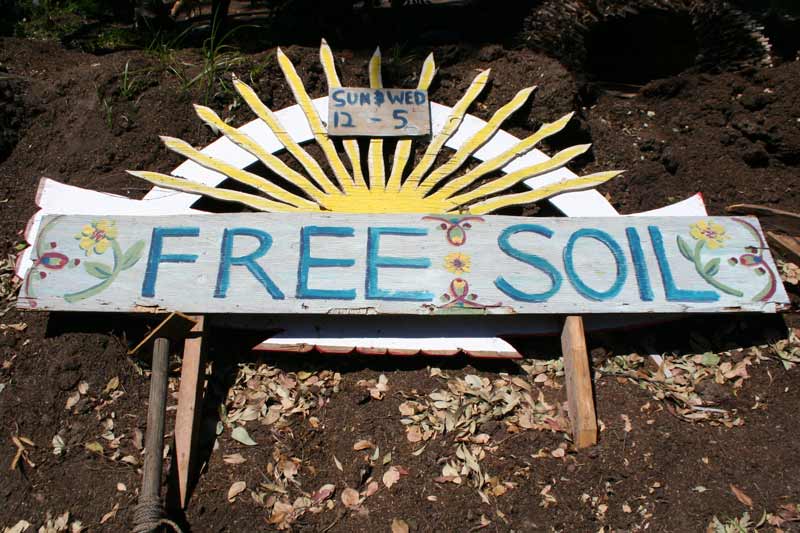 So even though the farm is now gone, with the site being cleared to make way for development, its philosophy towards sustainability and community won’t be withering away any time soon. Thanks to Jay Rosenberg and the volunteers at Hayes Valley Farm for sharing their story with us. For more information on what they're up to next, visit 49Farms.org.
San FranciscoHayes Valley
Sep 24, 2021