There was music, laughter, sadness, nostalgia, and heavy machinery — all the makings of a successful funeral at Haight and Laguna last night.

Yes, throngs of neighbors and art lovers alike gathered at the corner to watch the destruction of Jeremy Fish's "Silly Pink Bunny" statue. The festivities kicked off just before 6pm, as singer/guitarist Matt Molina entertained the crowd. 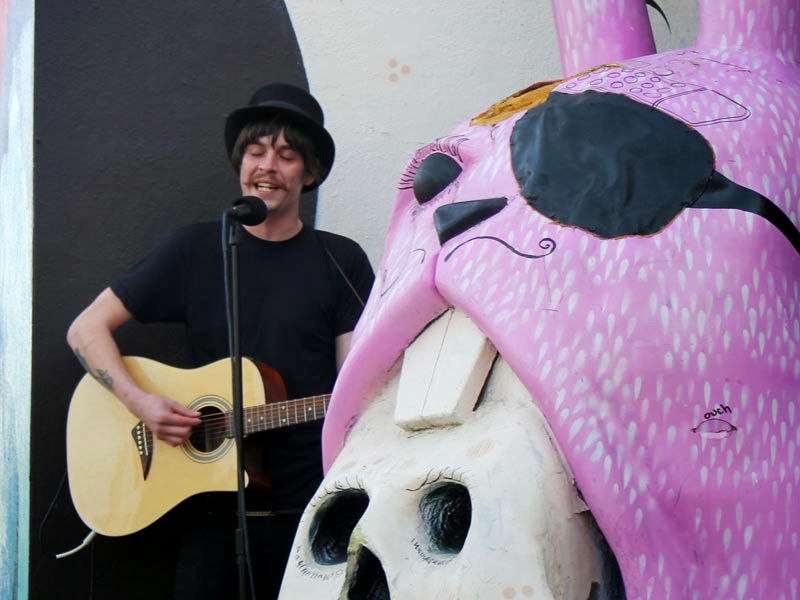 Then it was time for the official proceedings. Devon Chulick and Thea Selby, the current and former heads of the Lower Haight Merchant and Neighbor Association, spoke about the history of the mural, which was installed nearly three years ago, and the importance of street art to the Lower Haight's identity. 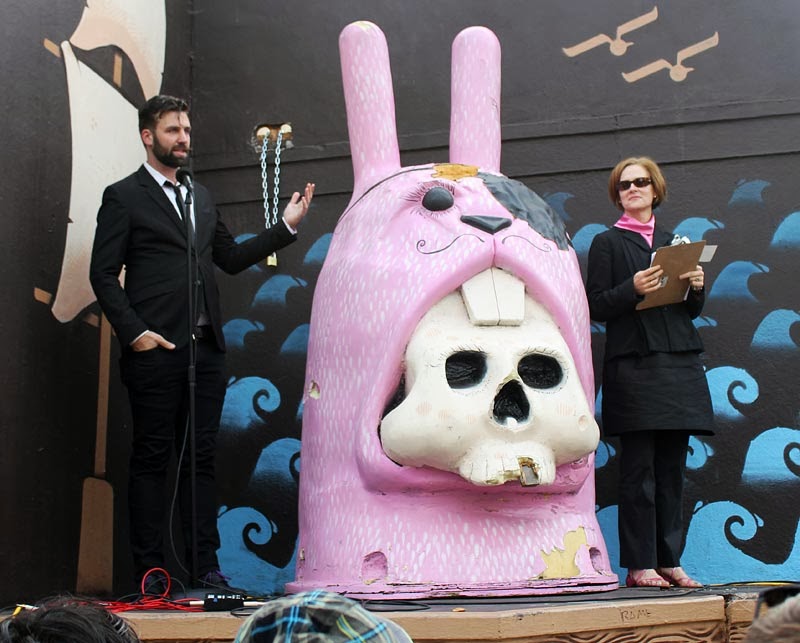 Supervisor London Breed then took the mic. She announced a fundraising campaign to have a 10-foot-tall permanent bronze version of the bunny installed "somewhere in the Lower Haight," and pledged $2500 of her own money to the effort. 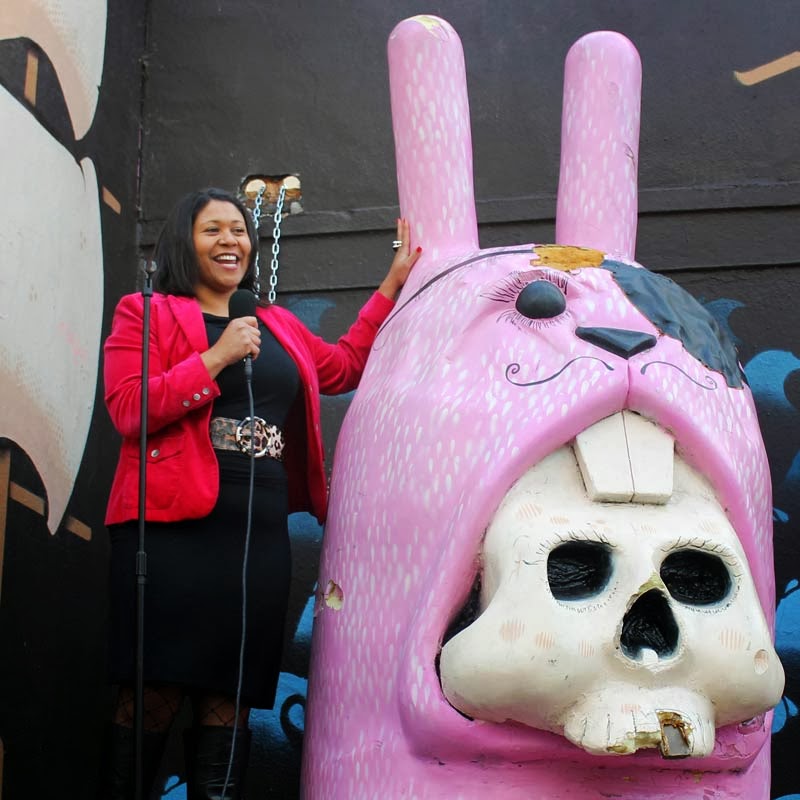 The total amount needed for the bronze statue is $50,000, and half of that has already been committed by the Haight Street Art Center. Jeremy Fish created special "I ♥ Lower Haight" bumper stickers for folks who donated $10 or more to the cause. 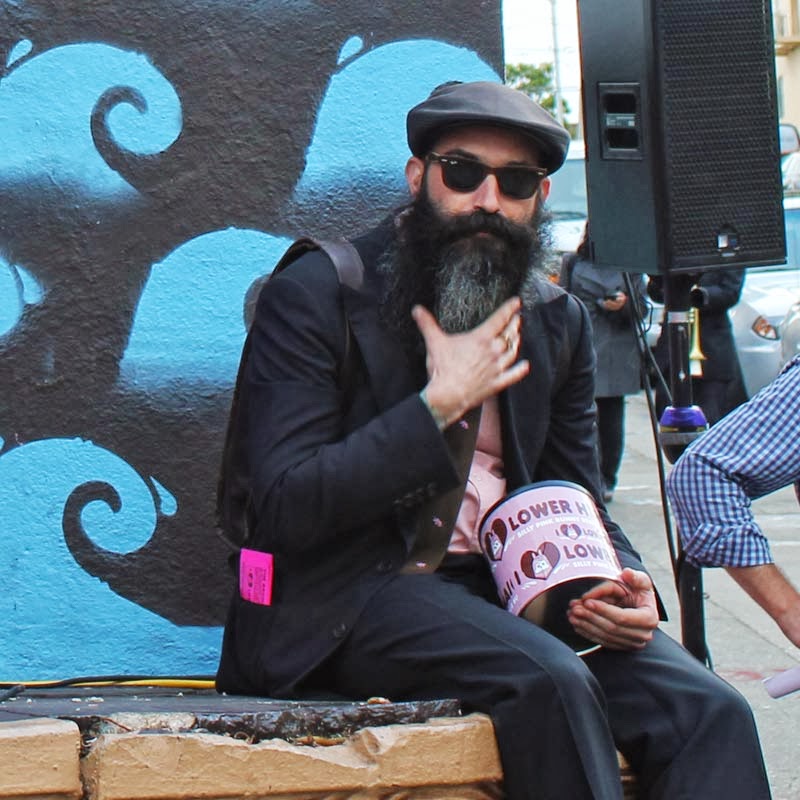 Speaking of Fish, he took one last photo of his creation before taking the mic and giving it an appropriately irreverent but heartfelt sendoff. 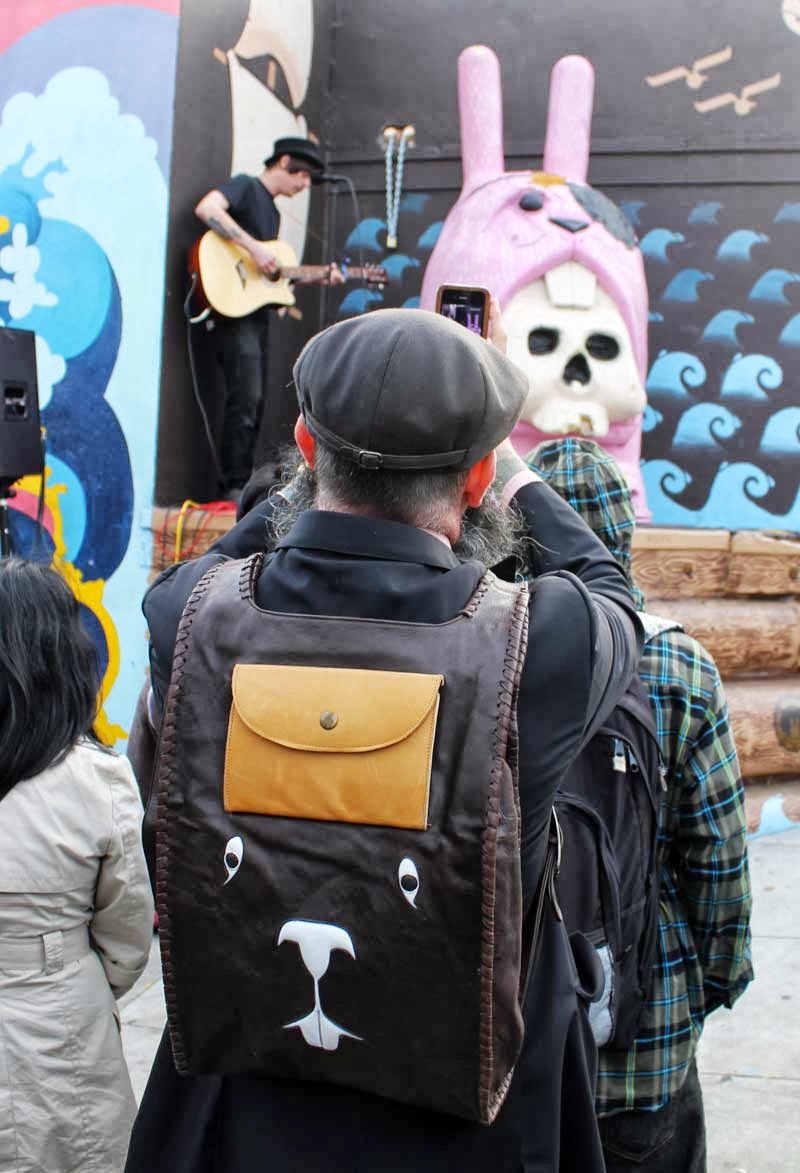 "20 years ago I lived like 2 blocks from here, and my roommate and I used to walk by here every day. I always thought it looked like something was supposed to be here, like a bench or a fountain or something. So I made this funny thing and stuck it here."

Fish thanked the friends who helped him sculpt the bunny, and Wood Partners and Haight Street Art Center for their help with the bronze statue project.

"You can't imagine how crazy that is. I made this thing with a bunch of my friends out of pocket for the hell of it to stick here for a year, and three years later the neighborhood's gotten behind it, people really love it, and the fact that I'm gonna get to make a 10-foot-tall bronze statue is beyond my wildest dreams."

He also thanked the culprits who stole the bunny earlier this month.

"I'd really like to thank the people who stole slash liberated the statue last week. Johnny Davis and the people from Emperor Norton's Boozeland are a great bunch of people. Support that bar, support those dudes. They love San Francisco history, and they only stole this thing to protect it. Unfortunately for them, my vision was to see this thing destroyed, and so, we're gonna wreck it."

Fish then thanked the residents of the neighborhood.

"I know that if I was in my house, and one day this weird pink thing showed up on my doorstep, I don't know that I'd necessarily be thrilled about it. And I would really like to thank all of the residents of the Lower Haight for their support of this statue, and dealing with having it in their front yard for the past few years."

The crowd, which by this point had swelled to several hundred, cheered and applauded throughout Fish's speech. 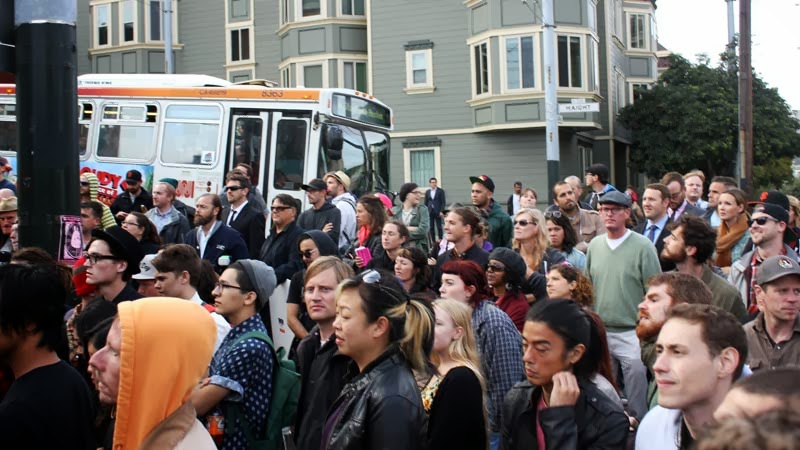 Finally, Fish gave a eulogy adapted from The Big Lebowski, and trumpeter Ed Ivey played the bunny off into the afterlife. 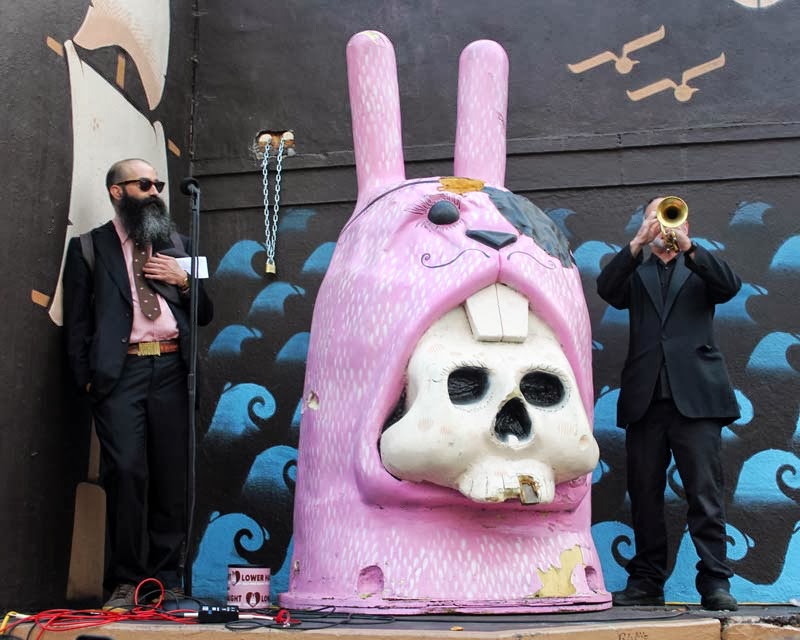 Then things got dark. Fish and Ivey scrambled off the platform, and suddenly the jaws of an excavator emerged from behind the wall. The crowd went nuts. 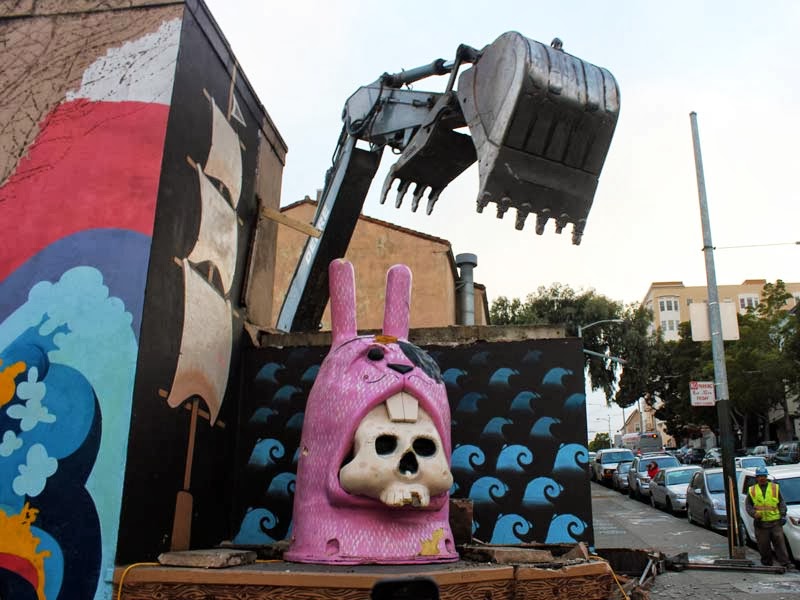 The excavator tore away pieces of the wall before closing in on the bunny itself. 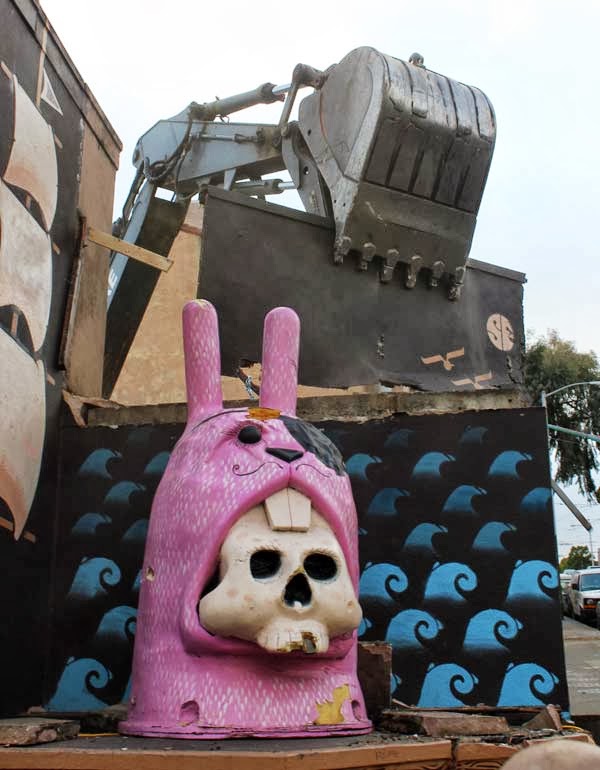 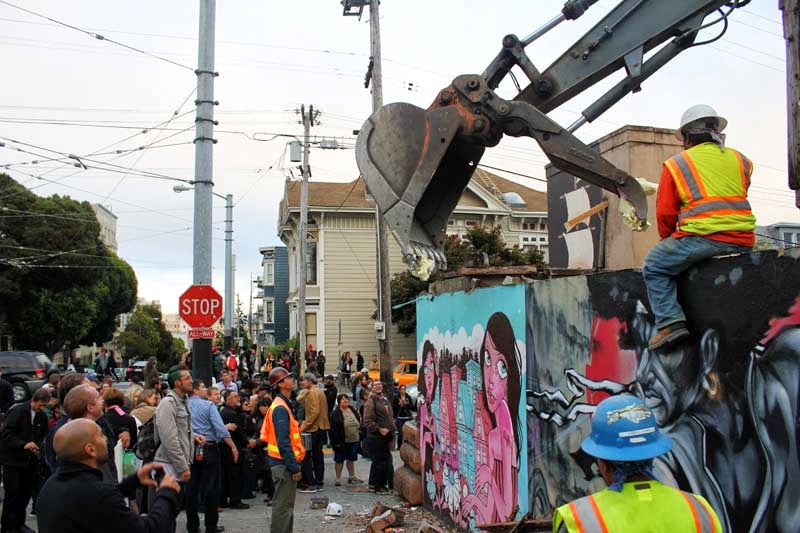 Then, it was the bunny's time to go. The jaws slowly descended upon its head, much to the crowd's delight. Whoever was operating that excavator had a great sense of suspense. 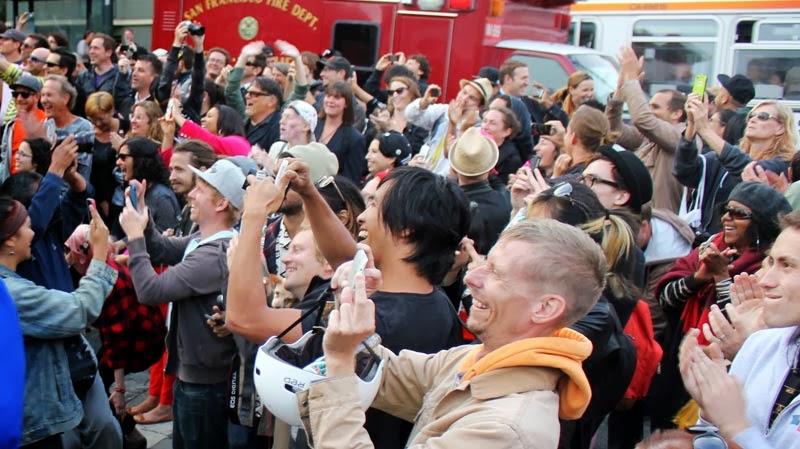 Finally, it chomped on the bunny and yanked it from its pedestal, lifting it up high into the air. 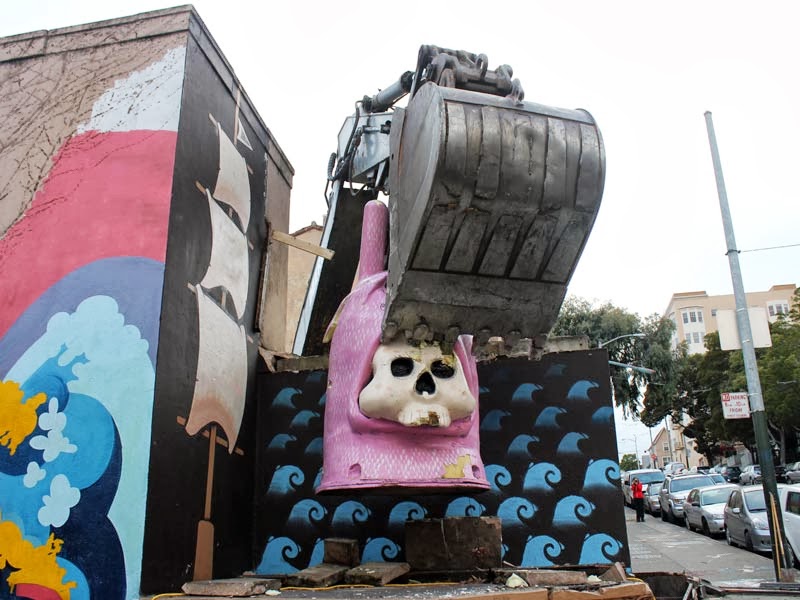 It then crunched the poor bunny into pieces. 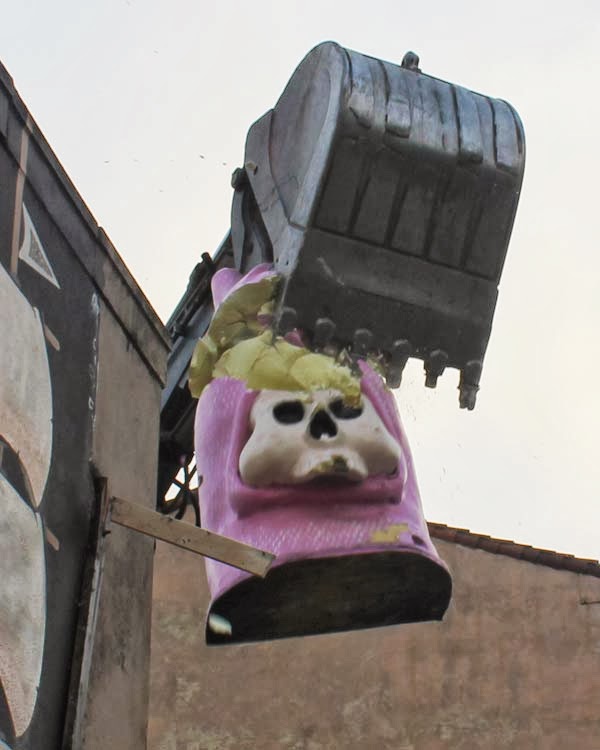 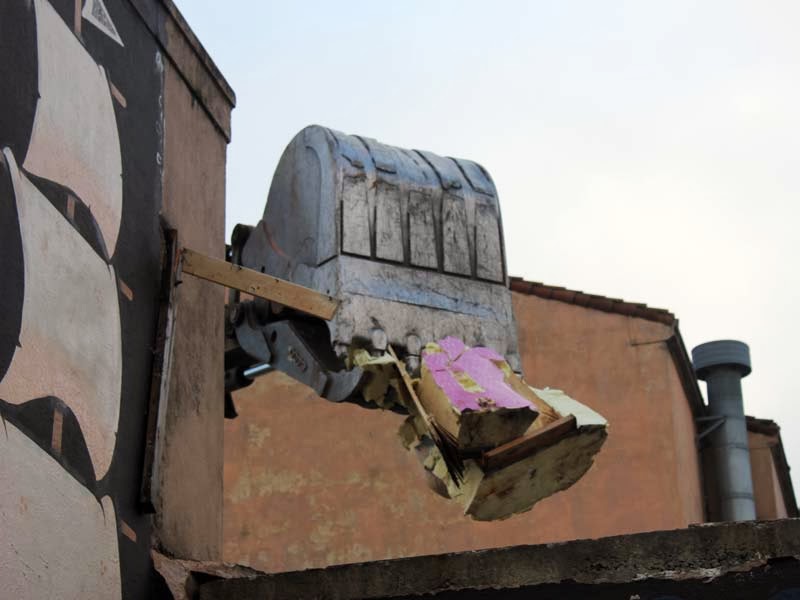 Members of the crowd scrambled to collect whatever remnants of the bunny they could, apparently not quite ready to say goodbye. 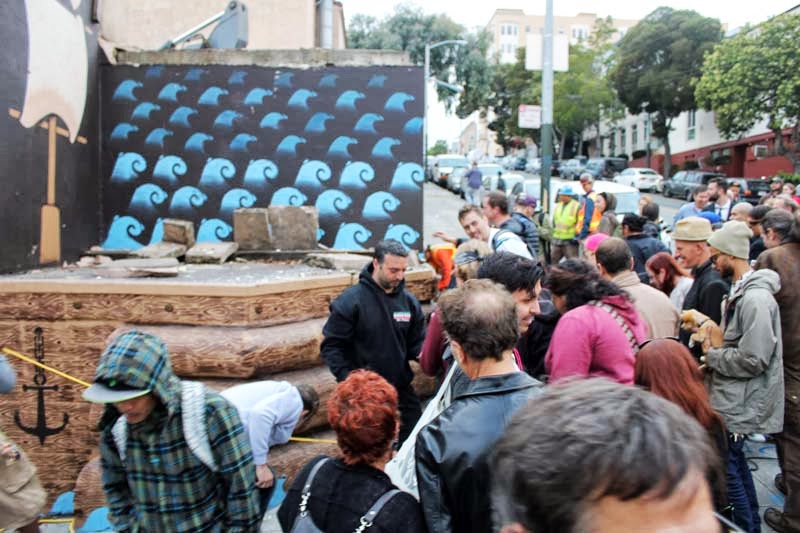 And with that, the funeral came to a close. It was a gloriously strange and cathartic event. As one onlooker described it, it was "the best funeral I've ever been to, definitely. I didn't know there'd be all that destruction." Update 9:45am: Here's some video from YouTube user cyndy666 of the bunny's final moments. Thanks @punkboyinsf for the tip!
Neighborhoods
Lower Haight