YouTube/mooncricket
By Andrew Dudley - Published on November 20, 2013.
San FranciscoLower HaightAlamo Square
For the past two Wednesday nights, the shuttered Sacred Heart Church at Fell and Fillmore has found new life -- as a roller skating rink, of all things.

This unlikely development is the brainchild of David Miles Junior, San Francisco's self-described "Godfather of Skate." Miles has been a fixture in the city's rollerskating scene for years. If you've seen masses of folks skating in Golden Gate Park on Sundays, or at the Inner Mission (formerly Cellspace) on Tuesday nights, or at the Women's Building the last Friday of every month, or at any number of other venues around the city, Miles is likely responsible. "I promote and organize nearly all the rollerskating events, races and competitions in the San Francisco Bay Area," Miles tells us. "A lot of people follow my skate scene. They are the Holy Rollers of the Church of 8 Wheels!" "The Church of 8 Wheels" is the name Miles has come up with for his informal skating organization, although until recently he lacked an actual church. "My skate parties are always a blast, but the venues are smaller than I would want," Miles says. "One day Tom, one of the skaters from Google, had such a great time that he told me that he thinks he knows a place where we could skate and it was much bigger... He said he knew the owner and would ask him if we could skate there." That place was the Sacred Heart Church. 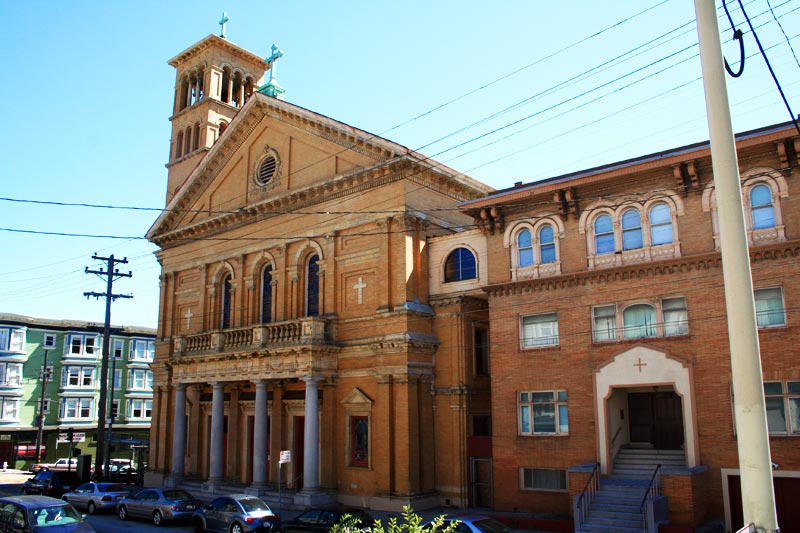 The church was constructed in 1896, and operated regularly until closing in December of 2004. It has remained unused ever since, so it was in less-than-pristine condition when Miles first got a glimpse inside. "The place needed a lot of work. The floor had 9 years of dust. It was dirty. There was construction materials that had to be moved. I got my people together, scrubbed down the floor, moved the debris, built a proper fire exit and set up the area for roller skating." On November 7th, the church hosted its first skating party. It was so successful, Miles says, that the building's owners agreed to let him make it a recurring weekly event. So now, every Wednesday night from 7pm to 10pm, the Sacred Heart Church comes alive with flashing lights, disco beats, and happy skaters letting the good times roll. Entry costs $10, plus an additional $5 for skate rentals. And this may come as no surprise, given the venue, but there's no drinking or smoking allowed. Here's a video previewing The Church of 8 Wheels and the space: Here's video from the inaugural night: And here's a film shot at last week's event, including some drone shots flying above the skaters. Now that's what we call secretly awesome.
San FranciscoLower HaightAlamo Square
15 minutes ago