Roughly 400,000 people were living in San Francisco on the morning of April 18, 1906, when a magnitude 7.8 earthquake shook the city.  Of that population, only two survivors are known to still be alive today.  Bill Del Monte is one of them.

We recently met up with Bill, now 108 years old, at his home in Marin to talk about the earthquake, the city, and his remarkable life. 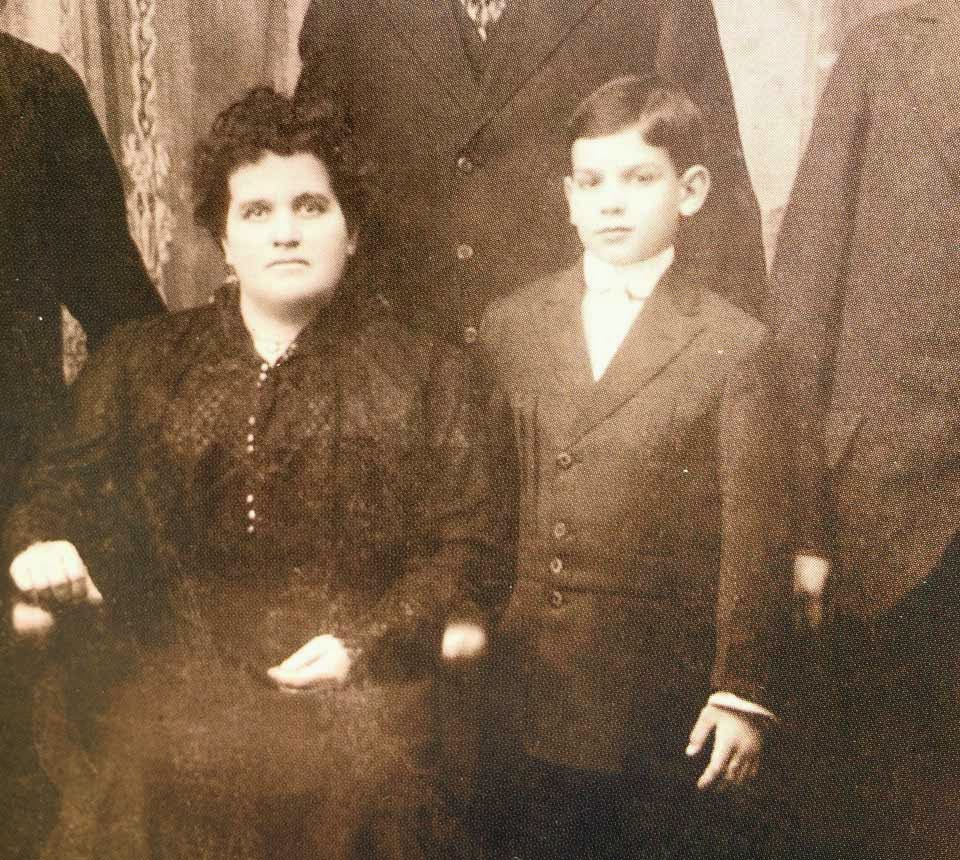 Born in January of 1906, Bill (pictured above) was only three months old when the quake struck.  His family lived in a house at the corner of Kearny and Broadway in North Beach, where his father Angelo was the co-owner of a restaurant called Fior D'Italia.  Though it would relocate several times over the years, Fior D'Italia continues to operate in North Beach today.

According to family lore, when the earthquake struck at 5am that April morning, Bill's mother wrapped him up in a tablecloth and fled the house along with his father and four siblings.  Bill was too young to remember the event, but the details have become part of his personal history.

"My dad had this place over in Elmhurst, near San Leandro.  My family, we were put on one of those [buckboard] carts.  And a horse dragged us down to the Ferry Building."
Fires raged on both sides of Broadway, but the family successfully reached the Ferry Building and sailed across the bay, where they took a train to Elmhurst.  They stayed there for the first few years of Bill's life as the city rebuilt.

Bill's early years reflected the highs and lows of the city and the nation.  He lived through both World Wars, but not as a soldier (too young to fight in the first, too old for the second).  He learned to play the stock market during the roaring '20s, even becoming a millionaire at one point—only to lose it all in the crash of 1929.


"You could buy General Motors for fifty cents, and other stocks for a dollar and a half.  Before then they were twenty to eighty dollars.  So, you just got wiped out.  I had some of those.  That's why I went broke."
Bill continues playing the stock market to this day.  "It's something that gets into your blood."

He tells tales of other potential fortunes that passed the family by—including one about a local canning company that needed a brand name.

"What they used to do was put tomatoes under [one] name. They put peaches under another name.  And something else under another name. And one day my brother overheard this kid saying, 'Del Monte, that's a good name. One of these days I'll name one of my products Del Monte.'"
That kid, at least according to family legend, worked for what would become the Del Monte Foods company.  A missed opportunity for a financial windfall, perhaps, but told all these years later with a laugh.

In 1935, Bill married his wife Vera.  Their marriage would last until her death 57 years later; they had no children.

We asked Bill about his memories of specific neighborhoods over the decades.  He remembers a field in the Marina where his father and their friends would compete to see who could throw a wheel of cheese the furthest.  The Mission was home to his high school, Cogswell, to which he would commute every day from Elmhurst via streetcar, then train, then ferry, then streetcar.  The Outer Richmond was the entrance point to Sutro Baths, where he would take dips with friends in the ice-cold pools.  And the Haight, well—he didn't have much reason to visit the Haight; he was already in his sixties by the Summer of Love.

Over the decades, Bill watched as the city —and the region—transformed.

"It has changed a helluva lot, that's for sure, in the last hundred years," he says.  "And it keeps changing."

He attributes much of that change to a few guys working in their garages:

Of course, Silicon Valley would have been impossible without at least one other invention that came to prominence early in Bill's life: electricity.

"I think that was the greatest invention there was, electricity.  People don't realize how many things have been developed with electricity."
And he recalls the era before electricity, when gas lamps and candlelight were the only sources of evening light.

Changing technology is a common thread in Bill's life.  One of his first jobs was running a movie theater that had just converted from silent to sound.  He remembers early airplane rides, including a particularly rocky ride on a DC-3 that took three times what it would take now and didn't have enough power to fly above the clouds.  And he marveled at the invention of television, and more recently, the Internet.

"Every week they invent something new now.  That's why in San Francisco, well the factories are down in San Jose, but they've run out of room so they're moving back to San Francisco—they're inventing things that you don't believe.   Now they want to make a watch now, a television watch, and a few other things."
(Until recently, Bill would regularly use a computer to communicate with his relatives, but his failing eyesight has now made that impractical.)

In the 1960s, Bill and Vera moved to Marin.  He recalls a particularly memorable dinner date with his wife in 1989 when, 83 years after surviving the first major Bay Area earthquake of the 20th century, he experienced the other:

Despite enduring two of the more newsworthy seismic events of modern history, Bill is remarkably unafraid of earthquakes.  He chalks it up to age.

"I've gotten used to them.  Now I care less, because I'm not losing much.  I'm losing a couple of months, maybe.  At that time, little did I know I would live to be 108."
Bill now lives by himself in a retirement community in Marin.  He's the oldest person there, he believes, and something of a local celebrity.  More than a few neighbors greet him with wide smiles as they pass by during our interview, his positive nature clearly infectious.
"If you're with a group, and they're all smiling and happy, you get into that.  And if they're all sourpusses, why, you become a sourpuss."
Bill is not a sourpuss.

In fact, for someone who has lived for 108 years, Bill proves more than willing—and able—to talk for hours about his memories and reflections on a remarkable life.  One thing he refuses to divulge, however, is the key to his longevity.


"I lived a wonderful life through a hundred years, through wars and everything ... I've had a lucky life.  Luckier than a lot of people on this earth.  I have no complaints."
Huge thanks to Garry Bowden of Souls of San Francisco for collaborating on this interview, and to Lee Houskeeper and Bill's niece Janette Barroca for making it possible.
San Francisco
About 21 hours ago