The Honda dealership at the corner of Van Ness and Market Streets has been purchased and will be replaced by condos.

The triangular lot that sits just across the street from the edge of Hayes Valley has been bought by Crescent Heights, the same developer who recently built the NEMA condos next to the Twitter building at Market and 10th. 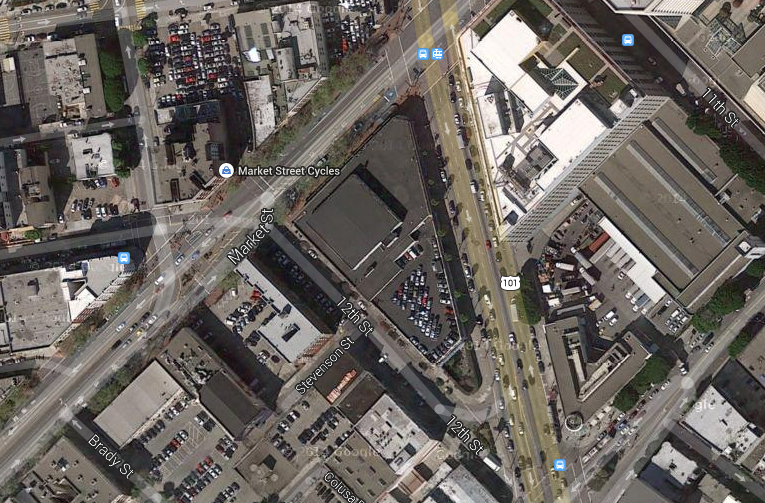 (Photo: Google Maps)
The NEMA complex has 754 residential spread across two towers. According to Socketsite, the plans for the new building call for 500-700 units, making it almost as large as NEMA.
While this might sound like it's coming out of nowhere, architectural plans for this space have been in the works since 2007. Below is what Brand + Allen originally designed for the building 7 years ago. 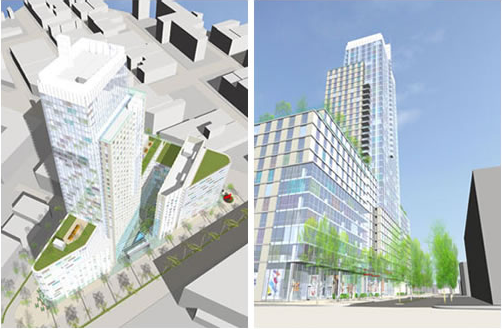 (Photo: Socketsite)
No word yet on whether they're keeping this design or when construction will begin, but we'll keep you posted once we find out more.
Something we can tell you now is a quick history of this lot. If you're thinking of it as "that corner where I catch the F" or "the car place across the street from where I line up to pay parking tickets," then you are absolutely correct.
But did you also know it was an important music venue for most of the 1900s? 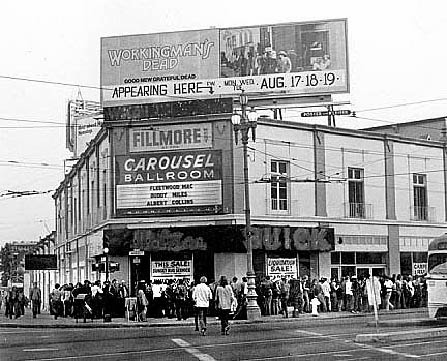 (Photo: LedZeppelinReference.com)
Whether you knew it as El Patio, Carousel Ballroom, or Fillmore West, this spot hosted some famous musical acts since it first opened in the 1920s. Some bands that performed over the decades were Glenn Miller, Les Brown, Aretha Franklin, Jefferson Airplane, Santana, Creedence Clearwater Revival, Grateful Dead, and Led Zeppelin.
According to this post, El Patio Ballroom opened in the late 1920s (on the second floor above a car dealership) and featured a lot of Benny Goodman-type of jazz. It was one of four El Patio Ballrooms, with the others located in Reno, Los Angeles, and Denver. It remained open until the 1950s, when it changed to the Carousel Ballroom, a venue that stuck around for another decade until it was purchased by Bill Graham.
Named after its sibling club in New York City's East Village, the Fillmore West opened its doors on July 4, 1968. This venue was designed to expand on Graham's Fillmore Auditorium (Geary & Fillmore) that was slowly breaking down and had become too small.
The Fillmore West remained open for 3 years (to the day). The last performance at the Fillmore West was on July 4, 1971. Graham estimated that when combining his tenure with the Fillmore Auditorium and Fillmore West, his venues saw over 1,250 musical performances and 3.25 million people.
According to this article from the Sarasota Harold-Times on July 5, 1971, Graham called it quits due to getting older, along with the decline of the musical community (a police investigation regarding an LSD-sipping incident certainly sped things up):

The "old joy" was gone, Graham said, and rock's new superstars have become "capitalists" demanding exorbitant fees, and "the community-mindedness of the rock community doesn't exist" any more.

That's our very quick snapshot at the history of this lot. We skipped over some large chunks of time, so if you have any additional information you'd like to share about the space, please let us know below.

Check out the full interview with Graham below. And as soon as we learn more about the future of this space, we'll let you know. 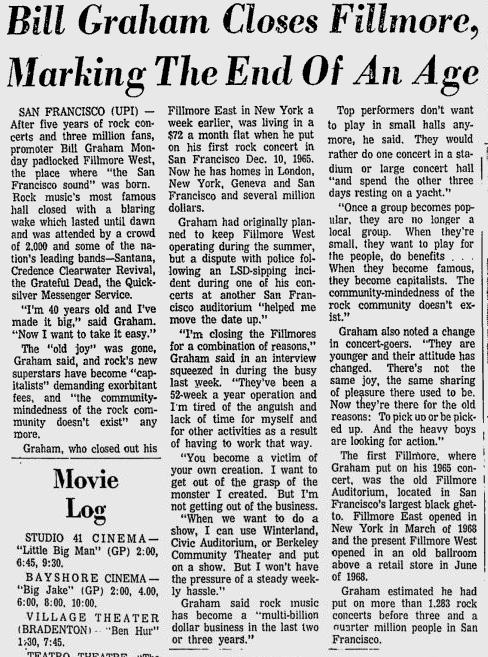