by Rose Garrett @rose_garrett
June 10, 2014
You've seen them around town, but do you know what the soda tax people are all about?
A San Francisco ballot measure that aims to tax sugary beverages at a rate of 2 cents/ounce is already heating up the city on its way to a November vote, garnering grassroots support and opposition from business interests. If passed, the measure would be the first of its kind, and could raise as much as $30 million per year, with 40 percent of that money earmarked for children's health programs in public schools.
We caught up with Lower Haight resident Elliot Haspel, who's been volunteering with the Choose Health SF soda tax campaign around town, to learn why he's involved and what he's got planned around the neighborhood.
How did you get involved with the soda tax issue?

"I used to be a public school 4th grade teacher, and I saw firsthand the impact of kids downing three Cokes or Gatorades a day—you could almost see the sugar coursing through their small bodies, rising and crashing, causing their attention to split five ways or their heads to slump into their arms. I also saw firsthand the impact on kids whose parents were dealing with serious health issues, including Type II diabetes.
"A 2-penny-per-ounce tax on soda in the City of San Francisco would raise upwards of $31 million for San Francisco schools, Recreation and Parks, and Public Health all while reducing consumption by up to 25%. When I found out that six members of the Board of Supervisors were coming together to propose such a tax, with revenues legally dedicated to go towards nutrition and other health education programs for kids, I knew I had to step up."

Who opposes the soda tax?
"The American Beverage Association (ABA), which is essentially synonymous with Coke, Pepsi, et al., is mounting a huge campaign to defeat this public health effort. With the recent release of movies such as Fed Up and a number of places around the country considering similar measures, they are terrified that if San Francisco is the first city in the nation to pass a soda tax measure, other cities will soon follow.
"The ABA is planning to pour upwards of $10-15 million into this campaign, making it the most expensive local ballot measure campaign ever waged in San Francisco. Their tactics are the same as they have used in other places considering similar policies aimed at reducing obesity and Type II Diabetes; we are expecting them to buy support and exploit legitimate local issues. They have bought State Legislatures, Congress and even local community groups. They are already spreading misinformation to voters and merchants."
What are your goals?
"In 2014, San Franciscans have a once-in-a-lifetime opportunity to make history and influence national policy on the issue of obesity and Type II Diabetes. The soda tax has been tried in 28 different states and has failed, due to Big Soda’s financial influence. Now, in our state legislature, courageous policy makers are simultaneously proposing a warning label on sugary beverages, and Big Soda is fighting it tooth and nail. Every time a similar measure has been proposed to reduce consumption, Big Soda’s lobbyists and high-paid consultants create front groups and spend millions to stop them.
"My goal is to raise awareness in the Lower Haight community (as well as surrounding neighborhoods in the Upper Haight, Western Addition and Hayes Valley) about the importance of this issue and our need to come together at a grassroots level to stand up for our neighborhoods and San Francisco kids."
What sort of community work are you guys doing?
"The two main elements of community work we are currently doing are tabling at the Divisadero Farmer’s Market and organizing 'Merchant Walks' to talk to local businesses. We had our first Farmer’s Market tabling on Sunday, May 10th, where we talked to a ton of locals and were able to recruit a number of volunteers.
"We’ve also talked to a number of local merchants about the soda tax and were encouraged at the level of support we’ve received from them. Once merchants hear the truth about the soda tax, they resoundingly support it. We will be tabling and visiting merchants throughout the summer and fall. We can’t do it alone though—we have an opponent with seemingly bottomless pockets who will stop at nothing to silence us."
What else should we should know about?
"As a resident of the Lower Haight, I love this city and I love my neighborhood. This ballot measure in 2014 is about more than just taxing soda. It is about fighting the obesity and Type II Diabetes epidemic that is plaguing our country, and sending a message that San Francisco won’t be bought. I am excited to see our neighborhood organize around this issue in the fight for a healthier San Francisco and look forward to meeting more folks who will step up in this historic moment." 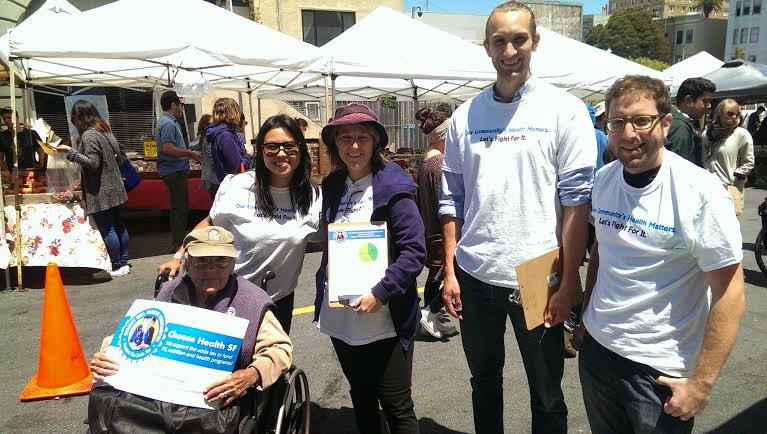 As for the other side of the debate, some opponents worry that the law could become a regressive tax on lower income families and would have little effect on curbing child obesity, while others worry it could hurt local businesses. A February press release from the ABA outlines the organization's opposition to the bill and others like it:

"No matter how you look at it, soda taxes mean fewer jobs. Americans have made it clear they don't support taxes and other restrictions on common grocery items, like soft drinks. Soda taxes have unintended consequences on middle-class jobs and small businesses. For these and other reasons, tax proposals continue to fail wherever they are introduced."

Another statewide bill that would tax soda and energy drinks is also wending its way through the California State Senate. If passed, a 1-cent/ounce state tax would be added to sweetened bottled beverages with over 25 calories, with the proceeds going to a fund to promote children's health.
A series of meetings are planned to go over the San Francisco soda tax proposal, with August the deadline to place it on the ballot, where it would join a similar proposal in Berkeley. If it goes forward, look for the measure coming up for a vote on November 4th.
Neighborhoods
Lower Haight