Hayes Valley In The 1860s: A Day Trip To The Hayes Park And Pavilion

Photo: No. 21 Streetcar/SF Public Library
By Jared Schwartz - Published on July 13, 2014.
San FranciscoHayes Valley
While Hayes Valley is now considered relatively close to Civic Center and the downtown area, there once was a time when our neighborhood was a vacation destination.
You read that correctly. Hayes Valley was where San Franciscans went to get out of the city and enjoy life away from the hustle and bustle of the downtown Gold Rush mayhem.
But before we get into that, let's take a step back and talk about where Hayes Valley gets its name and why it was originally founded.
In a 1928 story in the San Francisco Chronicle entitled Hayes Valley in the 50s (that's the 1850s), author E.G. Fitzhamon explains that the neighborhood "was named for and owned by Colonel Thomas (Tom) Hayes, a rather picturesque but shrewd figure in early San Francisco politics and in state military affairs."
Tom's brother, Michael, was also involved in the San Francisco political scene and on a committee that named the streets of the Western Addition.
Described as a close friend of Mayor James Van Ness, Tom Hayes was the County Clerk and the two often worked together on the "forefront of whatever was happening socially, politically, and in business."
At some point in the 1850s, Hayes acquired a land grant of 160 acres to the west of Van Ness Avenue, which was then outside the city limits. The property started near Divisadero and was bordered by Haight, Market, and Turk streets.
While this might seem like an incredible purchase today, the Hayes Valley area of land had little value then. According to Fitzhamon, "Even after city limits had been moved further out it is on record that cabin lots of 25-foot frontage were sold by Hayes at $16 each.”
As the land got developed, Hayes decided to turn a section of Hayes Valley into a tourist destination. In an area near Laguna, Hayes, and Grove streets, Tom Hayes created a pleasure park and pavilion. It had a restaurant, bar, and other "money catching attractions." The distance was far enough from San Francisco that residents would make it a day trip (or half-day trip) to get out of the city. 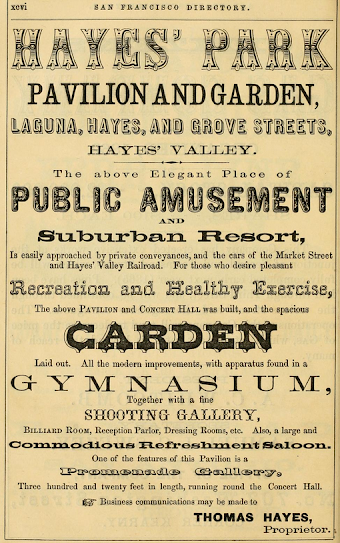 This page from the 1864 San Francisco Directory advertises Hayes' Park, Pavilion and Garden, describing it as a "suburban resort" with a garden, concert hall, gymnasium, and shooting gallery.
The picture below shows what Hayes Valley looked like in 1864, the same year as the advertisement from above. The building in the top left corner is the Protestant Orphan Asylum (located between Hermann, Buchanan, Haight, and Laguna) which we wrote about two years ago. The semicircular building in the distance is the Hayes Pavilion. (Hayes Valley in 1864, SF Library Collection)
Now let's talk about that train.
In 1948, Dick Nolan wrote a story in the SF Examiner called Ghosts of '57 Sneer Again at The 5 Line that documented the transportation change from streetcars to buses on the Hayes and McAllister Street lines.
According to Nolan, Hayes thought if he could get people to his new area of land easily, it could stimulate a building boom in the new “Hayes Valley.” So while he was acquiring the land and building out the Hayes Valley park and pavilion, he also invested in transportation. 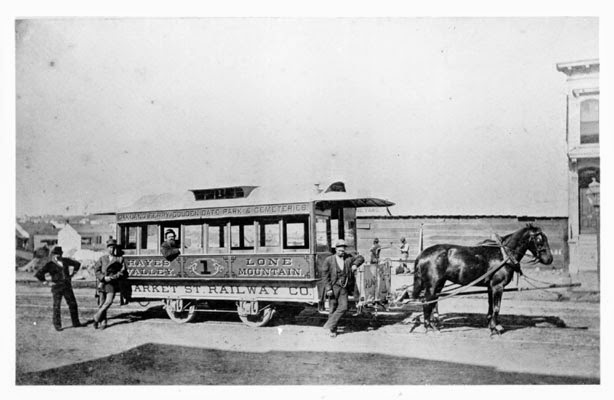 (Hayes Valley Lone Mountain horse car of 1870, SF Library Collection)
“Thomas Hayes first started running a horsecar line over those routes in 1857," Nolan wrote. "The oldtimers thought Hayes’ newfangled contraption was downright effeminate. They refused to ride in the thing, much preferring their own sturdy legs to get them about in town, and those of a good ridin’ hoss for longer trips.”
While Hayes continually pushed for the horsecar to bring people to his new neighborhood, a shortage of money became an issue and he had to make other plans.
“Unfortunately for Hayes’ ambitious real estate plans, he soon ran into financial difficulties. Eventually he even lost his franchise to operate the horse car lines. It was taken up eagerly by the Market Street Railroad Company.”
A steam railroad was built to bring people to Hayes Valley. It departed from Market and 2nd Street, went southwest on Market, and turned west on a road that eventually became Hayes Street.
The McAllister line converted to a cablecar in 1883 and the Hayes Street line did the same within the next few years. After the earthquake and fire of 1906, both became electric street car lines.
"Buses on the No. 5 and No. 21 represent only an interim change,” Nolan wrote in 1948. “Both will be served by trolley coaches when the city’s trackless trolley program gets under way early next year.”
Today, the 5 and 21 (along with the 6 and 71) continue to get people to Hayes Valley from all over the city (and, if there's a Muni meltdown, you can still use your own sturdy legs). A good ridin' hoss, unfortunately, is no longer an option, but next time you're headed to the neighborhood, tip your cap to the memory of the suburban getaway it once was.
San FranciscoHayes Valley
About 21 hours ago