Photos: Rose Garrett/Hoodline
By Rose Garrett - Published on July 25, 2014.
San FranciscoHayes Valley
Last night's meeting of the Hayes Valley Neighborhood Association was a doozy, bringing together representatives of the SFMTA, the SFPD, the Supervisor's office and plenty of local residents to discuss traffic safety issues in Hayes Valley (many of which were highlighted in our recent review of the most dangerous intersections in the neighborhood). Too busy enjoying last night's warm weather to attend the meeting? We've got the recap.
Supervisor London Breed was in attendance, and, like many of the folks who spoke up during the meeting, she noted a rising sense of urgency around traffic safety in the neighborhood.
"I went to the HVNA board meeting and got an earful about some of the challenges around traffic in the area," Breed said, noting that "we’re hoping to implement some changes sooner rather than later." She said that a study to determine a reconfiguration of the Octavia & Oak intersection is ongoing, and she hopes to bring the results back to HVNA in September.
Sergeant Michelle Henderson and officer Luke Lucas were on hand from the SFPD. Both Northern Station beat cops, they noted the challenges of enforcing violations for dangerous traffic maneuvers, saying that while they once had designated motorcycle patrols for traffic stops, staffing shortages have meant that it's usually the same cops who are policing crime that are supposed to monitor unsafe driving. "We are trying to build up our ranks, but we’re still behind," Henderson said.
“District-wide, accidents are down 8% from this time last year,” said Henderson, although injury-accidents from January-July of this year, overlaid with the same period last year (below), still show a problem in Hayes Valley, especially along the busy thoroughfares of Octavia and Gough. 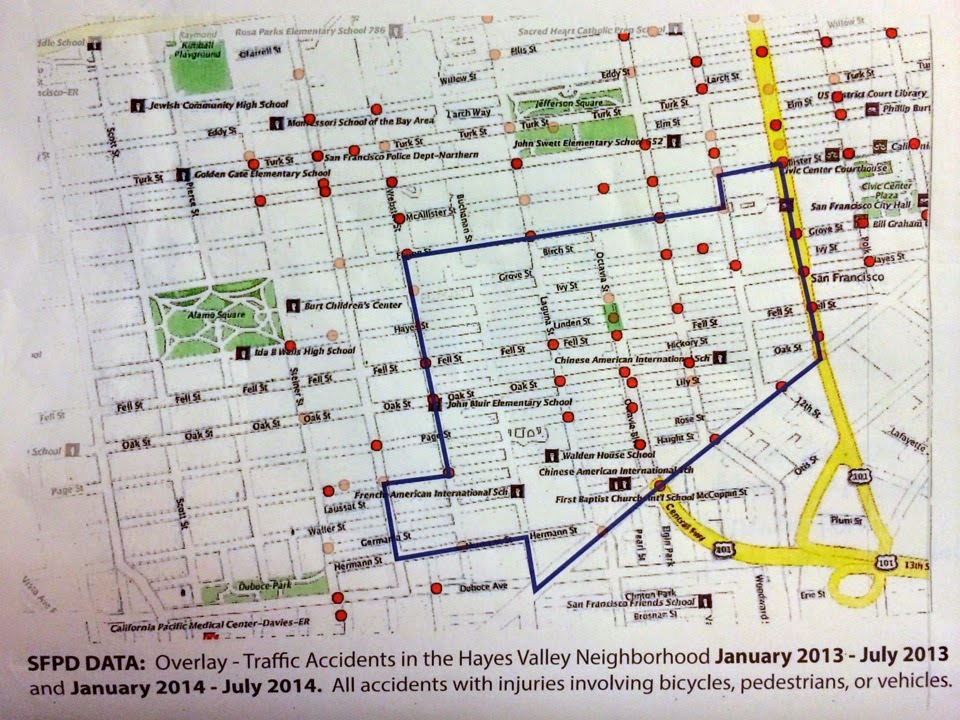 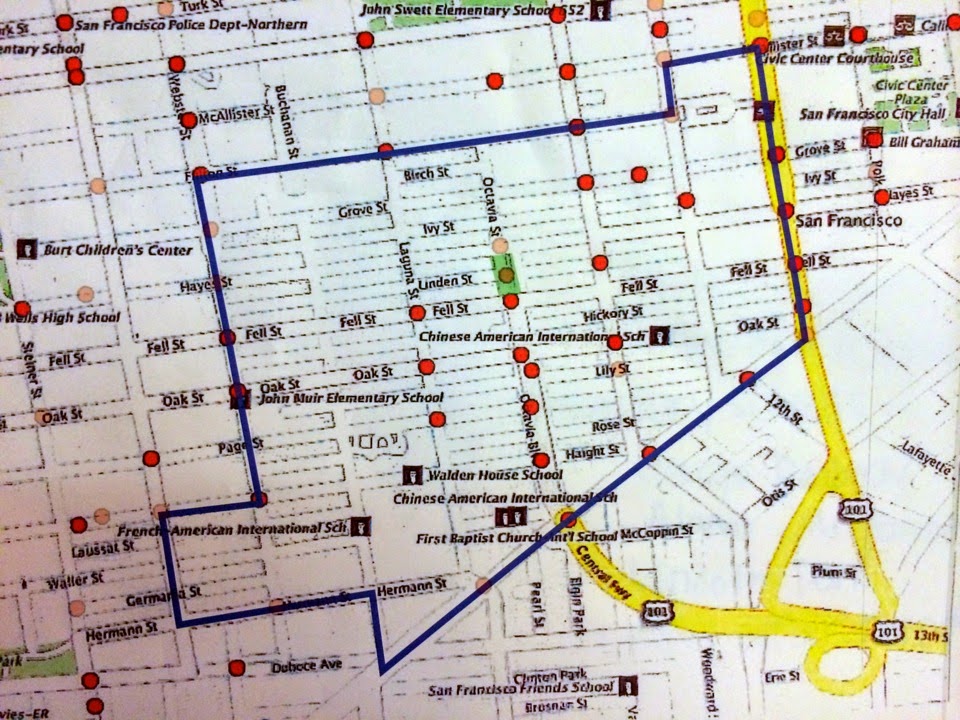 Much of last night's discussion centered around the contrast of drivers' freeway on- and off-ramp mentality with the residential nature of the neighborhood. One concerned mother noted that children play at Patricia's Green while drivers barrel north up Octavia, some of them missing the left turn onto Fell and turning the bollards that divide the park from traffic into dangerous projectiles.
The concern goes along with the recent petition to install speed bumps along Patricia's Green. Nick Carr of the SFMTA's Livable Streets program, noting the concerns, said that if you would like something done about Patricia's Green or any other area where you see dangerous traffic, there's an  online application for traffic calming measures where you can log your concern and submit a petition (signed by at least 20 residents from separate households on your street). The deadline is next Friday, August 1st, so now's the time to speak up if you've got concerns.
The HVNA's own map of suggested improvements for the area is below. It includes a big focus on the Market & Octavia and Market & Gough intersections, the suggested additions of stop signs at Octavia entry intersections, bike improvements along Page Street and the bold idea to make both Fell and Oak streets two-way, starting with the blocks east of Octavia. 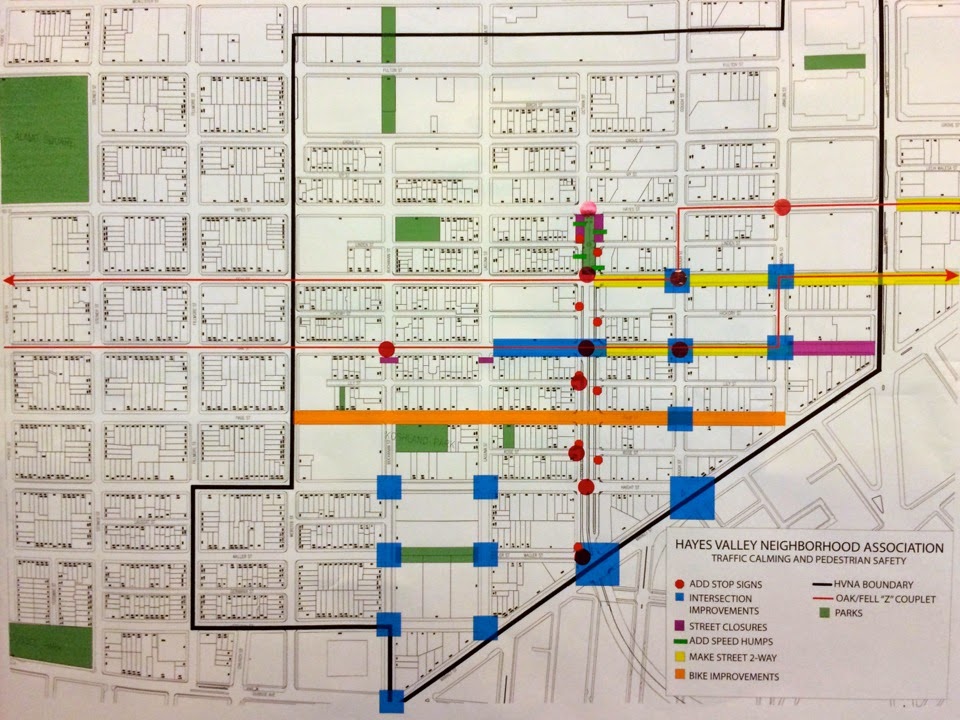 As for what's been planned by the city versus what's happened so far, the SF Planning Department brought along these maps, which show that pedestrian safety and greening along Octavia Boulevard is ongoing, while bicycle safety upgrades along Polk and Page streets, transit improvements on Van Ness, and  pedestrian safety improvements at the dicey Franklin & Hayes and Gough & Fell intersections are on the radar. 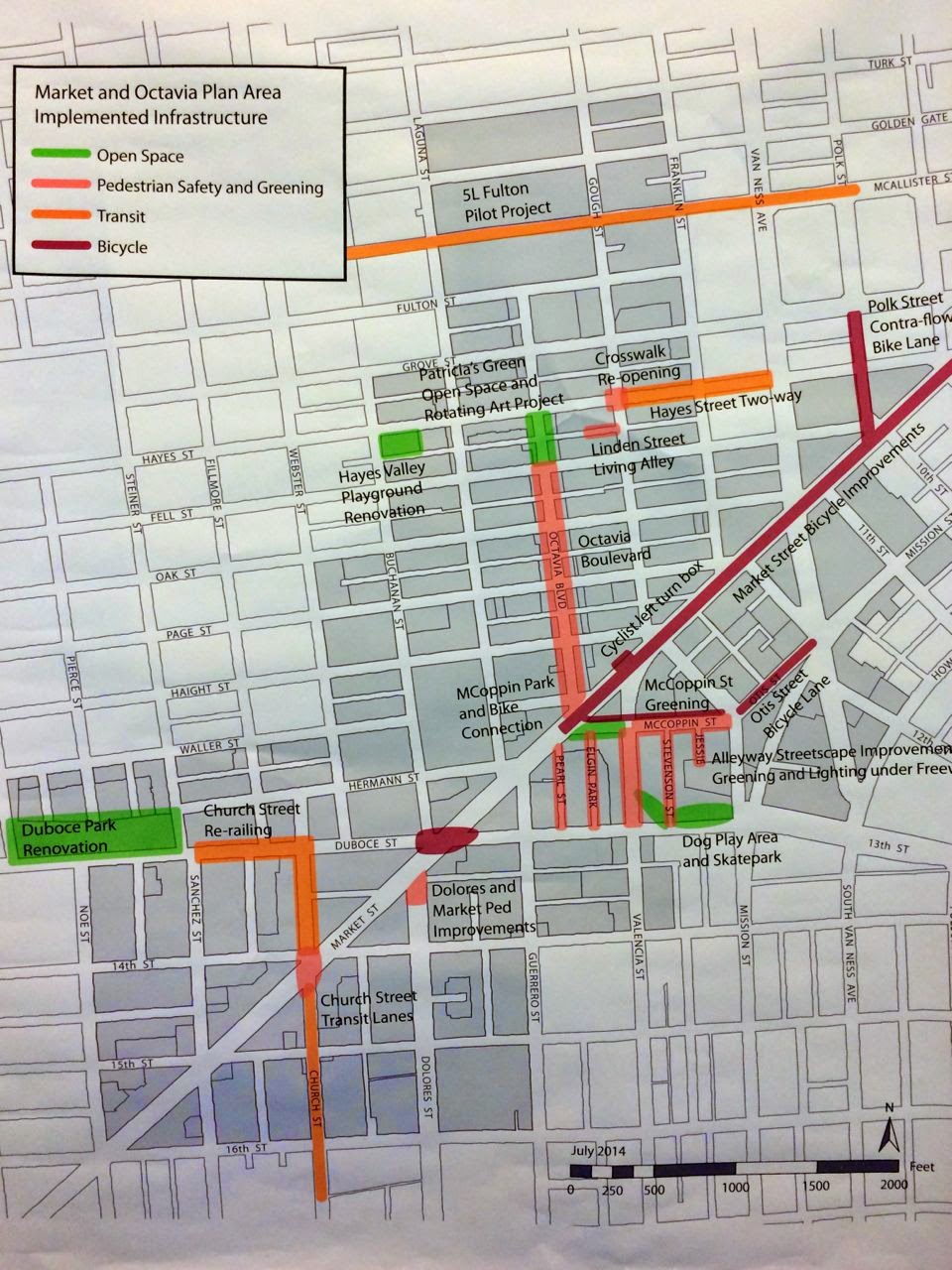 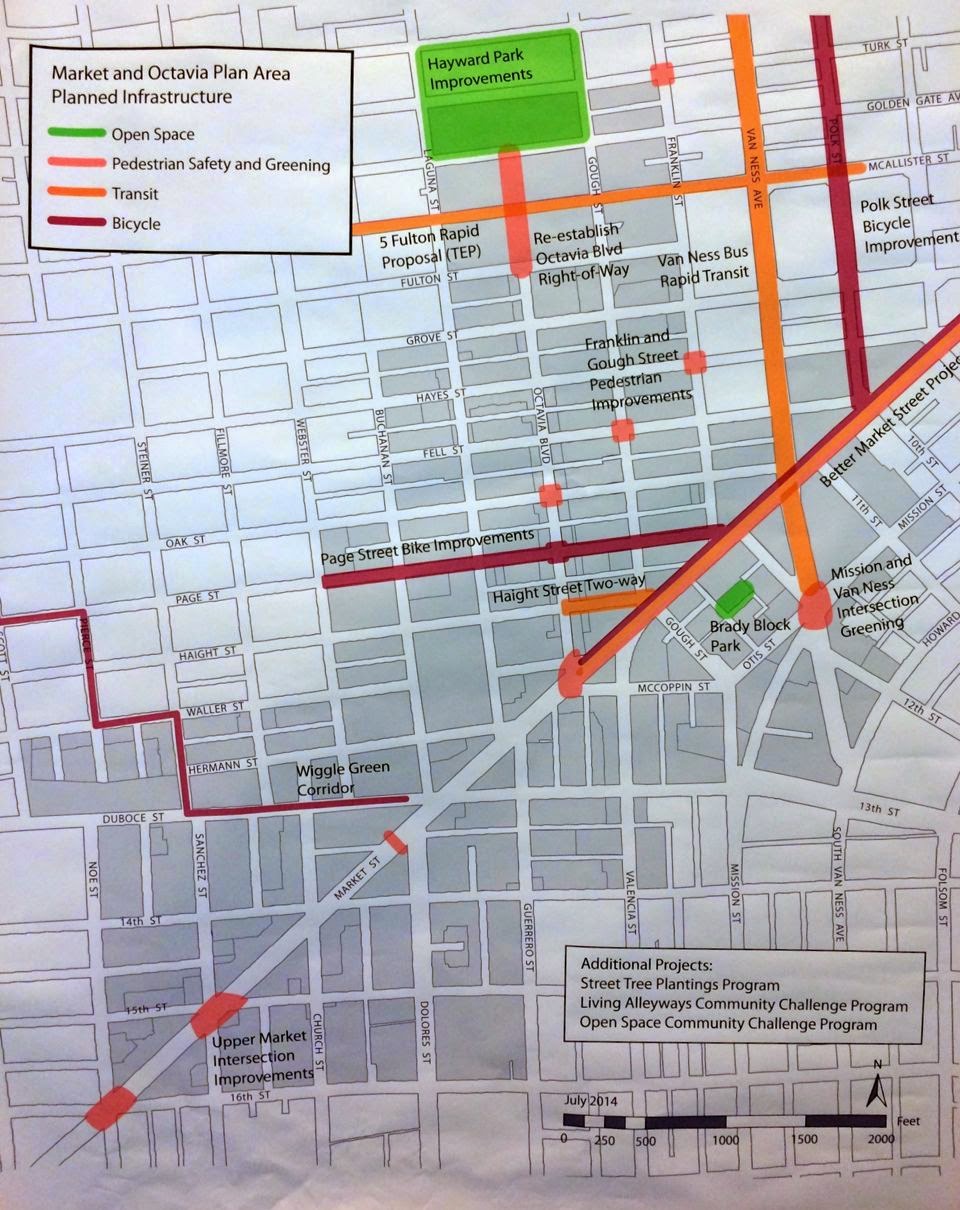 An open discussion following the presentations raised further concerns from residents, some of them more practical than others. From a wish for citations for pedestrians crossing the street after a countdown timer has begun (it's technically illegal, but virtually impossible to enforce), to noise complaints (“Is there an ordinance that deals with excessive noise that irritates older people?”) to impassioned proposals to eliminate right turns on red and cut down on car use altogether, this was the time to air grievances, log minor complaints, and kvetch about everything (and nothing).
And now, we'd like to hear for you. Is neighborhood traffic getting more dangerous? Are there fixes in the works that will fix the problems? What do you think is the biggest issue with pedestrian, cyclist, and driver safety in the neighborhood? Chime in with comments if you've got 'em.
San FranciscoHayes Valley
Sep 30, 2022