From Arcades To The Arcane: San Francisco's Strangest Laws

Flickr / Christopher Berry
By Andrew Dudley - Published on September 14, 2014.
San Francisco
This coming Thursday, the SF Planning Commission will vote on whether to amend the city's Planning Code to allow arcades in the Upper Haight.
Yes, there's currently an ordinance that bans arcades in the Upper Haight.  But why?
As it turns out, there are dozens of rules and regulations on the books that may seem strange to us now, but were motivated by some pressing cultural issue or specific incident at the time of their adoption. The arcade ban is one such case.

Trouble with pinball arcades dates back to the late 1960s.  The trouble wasn't so much with the venues themselves, but with the associated behavior or perceived depravity of the people who frequented them.
One venue, Tracy's Do-Nuts at 1569 Haight Street (now Gold Cane), had pinball machines installed well before the Summer of Love. However, by 1967, the venue's clientele had changed.  It was drawing motorcycle gangs, whose members were using LSD and marijuana in and around the shop, according to a report in the Chronicle on August 22, 1967. The police threatened to have Tracy's pinball license revoked; instead, the owner surrendered it voluntarily.
"Then after the hippies have left Haight street, he will reapply," his lawyer said.
A decade later, concerns about pinball players had shifted from hippies and biker gangs to gays. Residents of the Upper Haight bemoaned the lack of diversity in the neighborhood's bar scene; there were too many gay and dive bars, and not enough bars for women and straight men.
In March of 1979, a bar called S.F. Boy at 1821 Haight (now Laguna Cafe) had its permit for pinball and pool tables revoked just a month after it opened. According to an article in the Chronicle dated March 22, 1979, "representatives from community groups protested that the proliferation of gay bars, discos and pinball parlors were bringing down the neighborhood."
Digging deeper into what "bringing down the neighborhood" means, the article cites a spokesman for the San Francisco Boys' Club, located just a block away from the bar, who expresses concern that "boys' club members 'might confuse' the club with the bar, even though minors aren't allowed inside S.F. Boy." Another resident is quoted as saying that his neighbors "want a balanced business district. We don't want it to be like Castro street – unmanageable."
Finally, the late 1970s and early 1980s saw a new wave of arcade games – video games – replacing pinballs at venues throughout the city. With the release of Space Invaders in 1978, Asteroids in 1979, Pac-Man in 1980 and Donkey Kong and Frogger in 1981, arcades suddenly became wildly popular with a new generation of customers, and applications for new arcade permits soared.
In 1982, the Board of Supervisors voted to place restrictions on the locations of arcades, and the number of machines allowed to operate within them. As the legislation concluded:

"The number of video game machines is rapidly increasing in the City and County of San Francisco... As the number of video game machines has increased, public concern has grown with respect to the location of these machines, the number of machines permitted at any given location, creation of street and sidewalk congestion where these machines are concentrated, accessibility to the machines by minors during school hours, and the occurrence of public disturbances and petty crimes in the vicinity of these machines. It is hereby declared to be the policy of the Board of Supervisors to regulate reasonable and orderly public access for patrons wishing to play video game machines, while at the same time protecting the health, safety and welfare of the general public, both on the premises and in the vicinity of the premises where video games are located."

The legislation banned arcades in neighborhood commercial districts (such as the Haight), and placed restrictions on the number of machines allowed in arcades outside of those districts.
Of course, a lot has changed since the early 1980s. Instead of going to arcades, people began playing video games at home via consoles like Atari and Nintendo, and on personal computers, and now on mobile phones. The heyday of arcades has long passed, and thus the regulations against them are no longer considered relevant.
Earlier this year, Mayor Ed Lee signed legislation exempting two specific areas from the 1982-era restrictions: Upper Market Street, and 1767 Waller Street.  Those two locations host a couple of arcade ventures: the upcoming Brewcade at 2200B Market Street, and Free Gold Watch at 1767 Waller.
And now, this week, the Planning Commission will consider further legislation that will both allow arcades throughout the Haight, and loosen various restrictions on arcades citywide.  Thus the legislation would roll back limits that have been in place for more than three decades, since the great arcade wave of the early 80s.

There are plenty of other seemingly unusual laws on the books, the origins of which are varied and peculiar. Here are ten of our favorite regulations from the SF Planning Code:
1. You can't bring a bird into a public park in San Francisco.

"No person shall lead, drive, conduct or otherwise bring or allow to remain in any park any animal, bird, fish or reptile other than horses, dogs and domestic cats. This Section shall not apply to duly authorized employees performing duties for the Zoological Park or the Aquarium, nor to persons acting pursuant to a permit from the Recreation and Park Department or the Recreation and Park Commission when the permit allows the presence of such animal, bird, fish or reptile."

2. If you're a waiter, you can't expose your genitals, whether real or fake.

3. It's illegal to have a pig in San Francisco, except in a small section of India Basin.

"It shall be unlawful for any person, firm or corporation to keep or cause to be kept any swine in the City and County of San Francisco except as follows:
For the sole purpose of loading, unloading, feeding and slaughtering of swine, the provisions of this section shall not apply to that part of the city and county bounded and described as follows:
Starting at the point of intersection of the southwesterly line of Arthur Avenue with the southeasterly line of Third Street or Railroad Avenue; then continuing along Arthur Avenue to the intersection with the northwesterly line of Keith Street; thence southeasterly along Keith Street to the northeasterly line of Fairfax Avenue; thence northwesterly along the northeasterly line of Fairfax Avenue to the southeasterly line of Third Street, also called Railroad Avenue; and thence northeasterly to Arthur Avenue and point of commencement; provided, that all buildings and structures shall be built and maintained in accordance with the building laws applicable thereto; and provided, further, that a certificate of sanitation shall be obtained from the Director of Public Health for the maintenance or operation of said business or premises, and further provided that no swine shall be kept upon said premises or within the City and County of San Francisco for a period longer than 30 days." 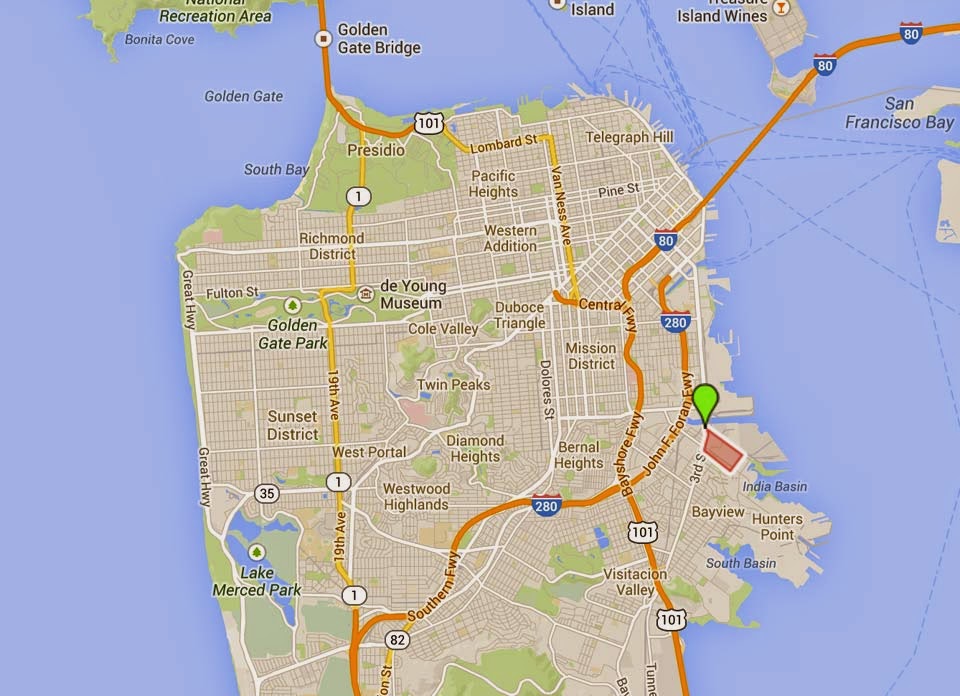 The swine-friendly area / Google Maps
4. You can't sell anything on Ocean Beach.

"It shall be unlawful for any person, group, firm or corporation to engage in animal sacrifice... If charged as an infraction, the penalty upon conviction of such person shall be a fine not exceeding $500."

6. You can't embalm someone unless they're dead first.

"No person shall use any embalming or preservative material in or upon the body of any deceased person, either by what is known as "cavity injection" or 'temporary embalming,' or by injection into the blood vessels, or by any other means, or at all, without first obtaining a certificate of death from the attending physician, if there had been no attending physician, then a certificate of death or a permit to embalm from the Coroner. Nothing herein contained shall be deemed to forbid the use of ice in and upon such body, from the preservation thereof."

7. If you sell lambskin condoms, you have to display a warning sign.

"It is the policy of the City and County of San Francisco to require every person who sells condoms made of natural membrane (lambskin) intended to be used for disease or pregnancy prevention to post a conspicuous warning at the point of retail sale, display for purchase, or dispensing of condoms that latex condoms labeled for disease prevention provide greater protection against AIDS, Hepatitis B and Herpes viruses than do natural (lambskin) condoms."

8. Your dry cleaner can't spit on your clothes.

9. You can't sell watercress that was grown near a sewer.

"No person shall gather, or sell, or offer for sale, or keep for sale, or give, or distribute, or otherwise dispose of any watercress, or any other edible herb or vegetable which has been, or is, or may be, growing within 1,000 feet of any sewer outlet, or any cesspool or any other place where stagnant water, or seepage, or other drainage, or any offensive matter, or any matter dangerous to health has, or may be accumulated."

10. If you work at a computer for more than four hours a day, the back of your chair must be upholstered with a moisture-absorbing material.

"[E]very employer, when purchasing [video display terminal] workstations or equipment, shall provide an operator who may... perform repetitive keyboard motions four hours or more, inclusive of breaks, per shift, with user-adjustable workstations and chairs that meet the following minimum standards:... Seat pans and backrests of chairs shall be upholstered with moisture absorbing material... Chairs shall be capable of being swivelled by the user... Workstations shall be illuminated with lights arranged to avoid visual glare and discomfort... Direct noise from impact printers shall be reduced to improve ease of communication by placing covers over the printers or by isolating the printers from the rest of the work environment."

Sure, few of these rules are likely to be enforced anymore, but they remain active city regulations to this day – colorful reminders of the times in which they were passed, if nothing else.
San Francisco
May 24, 2022