by Camden Avery
September 7, 2014
One of the few things San Franciscans can agree about lately is that the city is experiencing growing pains.
From a population boom, to a housing stock shortage and real estate bubble, to drifting crime patterns, to a fresh flush of new cash and construction, to a perceived cultural discord that’s been making national headlines in publications like the New York Times and the New Yorker, the byword is: change.
As with any tectonic shift in an urban landscape, the dialogue taking place in San Francisco today suggests certain frictions — words like blight and gentrification, safety and crime, eyesore and entitlement.
And when the words start to fly, it’s only a matter of time before the word "NIMBY" ("not in my backyard") gets thrown around, a favorite epithet for the intransigent and reactionary, resistors of change and, as it sometimes implies, progress.
"NIMBY" can mean many things, but by definition, it denotes simply the desire to keep something — a new building, public services, crime — out of a neighborhood someone identifies his or herself as part of. It requires two things, then: identification with a space, and the desire to preserve that space. And it doesn’t have a predictable politics: “NIMBY” applies evenhandedly both to longtime residents opposing the rush of tech companies into Mid-Market, for example, and those tech employees who see the area as blighted and teeming with unsavory behavior. 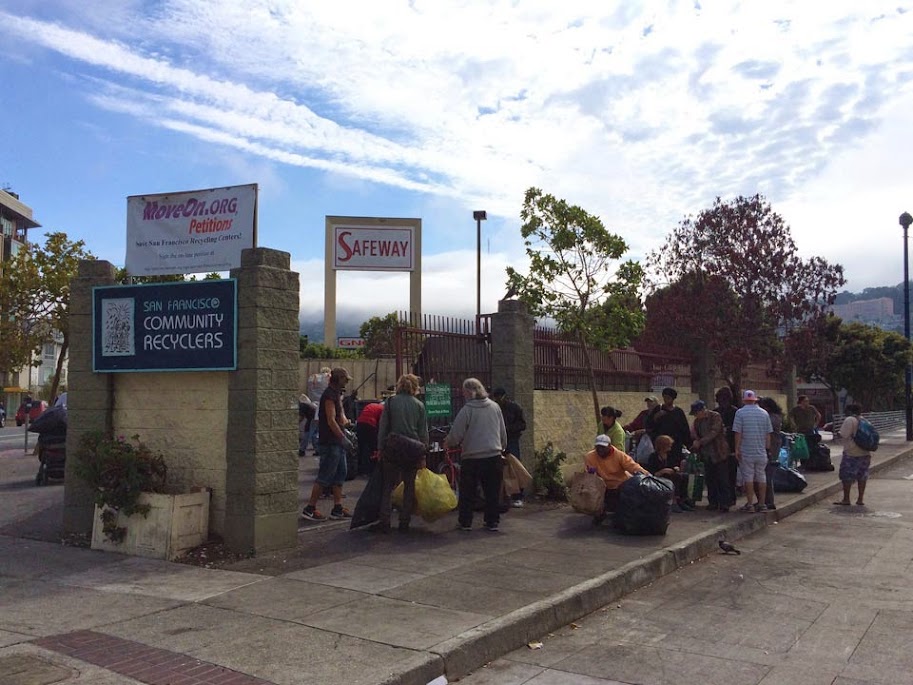 Photo: Andrew Dudley/Hoodline
Current disputes across the city that have invoked the term NIMBY include, for example, the old-schooly resistance to the latest tech boom; the ongoing Bacon Bacon saga on Frederick Street; the recent evictions of recycling centers both at Safeway and in Golden Gate Park; and a perceived recent uptick in visible homelessness and related crime in Duboce Triangle.

What all of these disputes have in common is this: something different, on the one hand, and some people opposing that difference, on the other. These disputes boil down, largely, to questions of belonging: who belongs where, and who does not, and why.
--------------------
One of the most vivid examples of sustained, coherent community resistance to a local change in San Francisco actually predates the fuss and turbulence of the current tech boom.
In 2007, the Homeless Youth Alliance, which was then at the corner of Haight and Cole, attempted to move its needle exchange program one block south, to the Hamilton United Methodist Church at the corner of Waller and Belvedere.
What ensued was a surprisingly vitriolic, vocal and organized neighborhood opposition to the move, documented widely in city media like the Chronicle and Examiner. No matter what political allegiances were involved, it was a conflict that was, in the nature of its argument and in the language of its response, a NIMBY dispute.
The proposed move was met by a round of well-attended public hearings, the first of which drew around 200 people to speak in opposition. In the end, the neighborhood blocked the move.
Although the HYA’s ill-fated move differs in its specifics from the turf disputes currently marking the rest of the city, the central elements resonate: a neighborhood serving many different communities, a wave of economic and residential transitions, and explicit conflict between homeowners and the homeless.
There are, not surprisingly, an enormous number of different ways to think about these disputes. But the newest addition to the mix comes from a paper officially released this summer in the International Journal of Drug Policy and written by Mary Howe and Peter Davidson of HYA.
The paper, "Beyond NIMBYism: Understanding community antipathy toward needle distribution services," is a critical examination of the rationale of the community forces that blocked HYA's attempted move back in 2007. Mary Howe is the executive director of HYA; Peter Davidson was in 2007 the chair of HYA's community advisory board and a doctoral candidate at UCSF.
The paper is a literature review of community meetings, newspapers, blogs, personal messages and other documents. It sifts through and organizes the language of the community's response to the move as a way to figure out what values were at stake, why the move didn't work, and what community tensions were behind the friction.
The paper's findings are, in short, that the conflict between residents and drug user service programs in the Haight are atypical of most conflicts between neighborhoods and needle exchanges: residents of the Haight aren't opposed to drug use, and in fact have incorporated historic and public drug use into the Haight's sanctioned mythology.
The language used by the community to characterize its dilemma, Howe and Davidson found, fell into the following four groups: “a different neighborhood,” “protecting the children,” “under siege,” and “failures of HYA.” These arguments about HYA’s proposed move posited that it would endanger the (different) neighborhood one block south, that it would put children at risk, that the neighborhood was under attack by a rising tide of homelessness and crime that would be exaggerated by the move, and that HYA was not working. 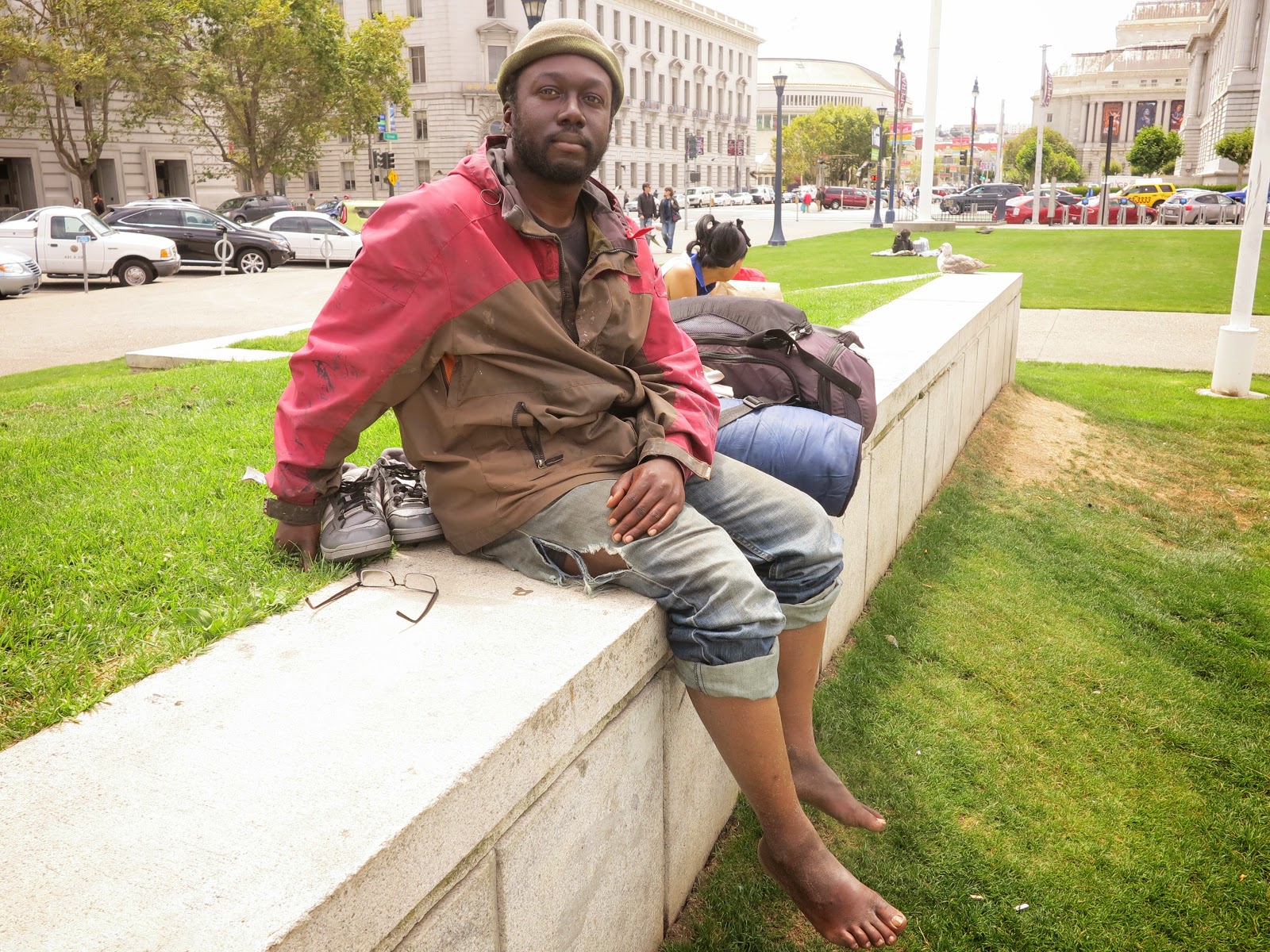 Davidson and Howe’s paper, focused as it is on their own organization, can provide a new way to think about neighborhood disputes and NIMBYism, and it has relevance citywide.

What they found was that the Haight, like many neighborhoods in San Francisco, is a contested space. In other words, it’s a hotbed for territorial disputes because it's diverse, and because the different communities who share it (homeowners, the homeless, students, artists, tech workers) all have "legitimate" support from the city and from the stories the neighborhood tells itself, about itself.
The typical response to contested space, the paper argues, and what occurs in San Francisco, is “defensive place-making,” the creation and reinforcement of new barriers, smaller neighborhoods, and new zones to police. One that emerged in the HYA discussion was the residential area around Waller and Belvedere — just a block off of the busy corridor of Haight Street, but described as a different neighborhood altogether by opponents of the organization.  Another example of defensive place-making might be the current semi-joking fashion for giving "micro-neighborhoods" ridiculous new names.
--------------------
There may be no easy answers for resolving these sorts of territorial disputes, but it's at least helpful to have a new framework for understanding them. And it's clear in all of these recent cases that, in transitional moments, along boundaries in flux, the people who live there are more active about making the boundaries around themselves real.
So the next time you talk about who wants a better neighborhood, or what needs to go, or what shouldn't come in, think about who else uses that space, and how they use it, and how many different "legitimate" uses are at stake. The city's only getting smaller.
Neighborhoods
Citywide, Upper Haight
Location
Haight Pizza, 456 Haight St