Photos: Steven Bracco
By Steven Bracco - Published on October 31, 2014.
San FranciscoCastro
Only one night after peacefully celebrating the Giants' third World Series Championship in five years, the Castro was back at it again, this time with a ribbon-cutting ceremony celebrating the conclusion of the eight-month-long Castro Streetscape Improvement Project.
The celebration took place at the rainbow crosswalk intersection of Castro and 18th Street. The San Francisco Lesbian/Gay Freedom Band kicked off the event with performances of The Black Eyed Peas' ‘Let’s Get It Started’ and Journey’s ‘Don’t Stop Believin’. 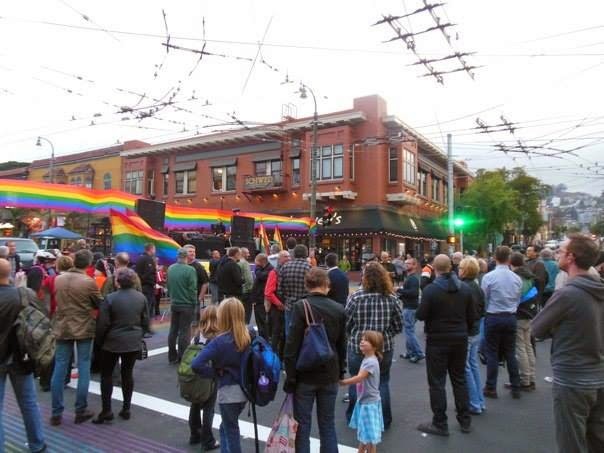 Next, District 8 Supervisor Scott Wiener took the stage to welcome everyone to the event and thank those involved. He reminded everyone that throughout the neighborhood's history, its residents have faced many challenges, and—as with the sometimes arduous streetscaping project—come through stronger in the end.
While this project was aimed at improving the neighborhood for the future, it also has a focus on remembering the past. The Rainbow Honor Walk and the Castro History Facts are a reminder of not only the neighborhood's recent history, but only of the history of the area, going back to the first indigenous peoples that called the area home.
Castro/Upper Market CBD Executive Directory Andrea Aiello summed up some people's reactions upon seeing the new sidewalks, saying “I had no idea it was going to be as cool as it is!”
The Sisters of Perpetual Indulgence went on to remind everyone how much fun has been had in the neighborhood. During their ceremonial blessing, they asked everyone to take a seven-second moment of silence—one for each of the World Series games—to think of moments that brought them joy in the Castro.
Mohammed Nuru, San Francisco Department of Public Works Director, then thanked all of the local businesses and residents in the neighborhood for their patience during the project.
As Castro readers are all too aware, It wasn’t an easy project for local businesses, many of which saw a huge decline in revenues during the project. Residents of the neighborhood didn't have it easy either, and some were inconvenienced with loud construction noise throughout the day. Now that this project is almost complete, though, hopefully local merchants and residents will be able to begin enjoying the wider sidewalks.
Next, State Assembly Member and Former District 8 Supervisor Mark Leno emphasized that while this project may be over, ensuring that the neighborhood stays welcoming and affordable to everyone is an ongoing issue that still needs to be addressed. Thinking of Harvey Milk, Leno said, “Harvey’s smiling tonight.” 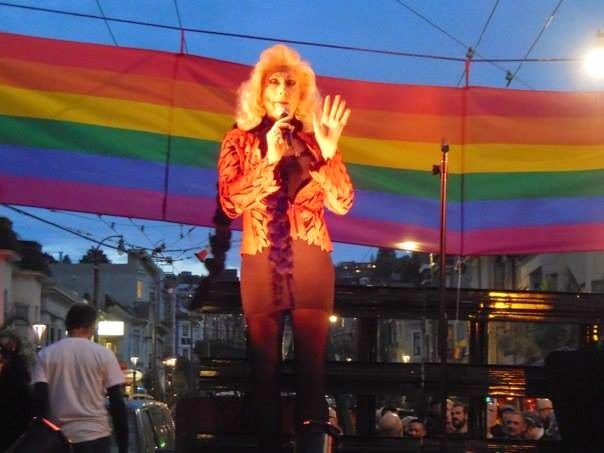 The evening just wouldn’t have been right without some type of Wizard of Oz reference, and Donna Sachet did not disappoint, leading the crowd in a sing-a-long version of ‘Somewhere Over The Rainbow.’
As everyone got onstage in preparation for the ribbon-cutting, LGBT rights activist Cleve Jones took a few moments to say out loud what many in the crowd may have been thinking: “I live in this neighborhood and I’m so glad this is over!” 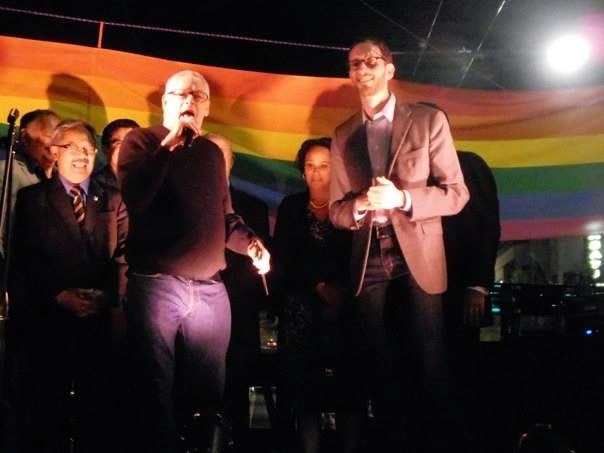 Before handing the scissors over to Supervisor Wiener, Jones informed the crowd that the ribbon was made by none other than Gilbert Baker, "the gay Betsy Ross." Baker is responsible for the design of the Pride Flag and was asked to design something for the ribbon-cutting ceremony.
After a few tries with the scissors, and what seemed like months, Supervisor Wiener and other city officials decided it was best to use a combination of pulling and tearing to finally accomplish the task of cutting the ribbon. 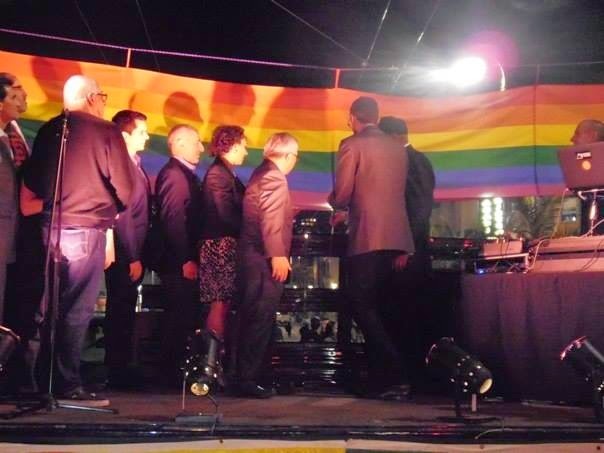 The rest of the evening was filled with entertainment from Matt Alber, Amoray and Gypsy Love, plus plenty of hand-shaking and congratulations all around.
San FranciscoCastro
About 10 hours ago