The Story Behind Hayes Valley's Most Creative Security Gate

Stephen Jackson/Hoodline
By Stephen Jackson - Published on October 09, 2014.
San FranciscoHayes Valley
This week, Hayes Valley’s most colorful doorway received a new treatment by local resident Todd Young.
If you’re not familiar with this particular slice of ephemeral public art, do yourself a favor and go check out the security gate in front of 222-220 Page Street, between Laguna and Octavia streets. The current edition is a mildly spooky rendition of the wicked queen from Snow White, complete with a tempting apple and the infamous mirror lurking in the background.
Originally from Kansas City, Missouri, Young moved to San Francisco roughly 20 years ago and has been living in Hayes Valley since 2010. At that time, he was only doing installations for Halloween and Christmas. However, 2014 has been a watershed year for his specific brand of pointillistic art.
“I’ve been doing them once a month this year because my mother asked me to make her a wall calendar,” he told us. “In fact, I started doing it in the first place because of my mom, but then I realized that it draws people in and that it’s inviting rather than off-putting, which is what security gates tend to be. Now, I know all my neighbors. How many other places in San Francisco can someone know all of their neighbors?”
According to Young, each installation takes between 25 and 45 hours to complete, and is made entirely out of cheap plastic tablecloths from the dollar store, which he then cuts into thin strips. Once he decides on an image, he prints it out on his computer and superimposes a grid over the picture. Then, he transfers the image onto the back of the gate using chalk. From there, he starts creating a mosaic of color by sticking the plastic strips through the holes in the gate using a narrow plastic stick. 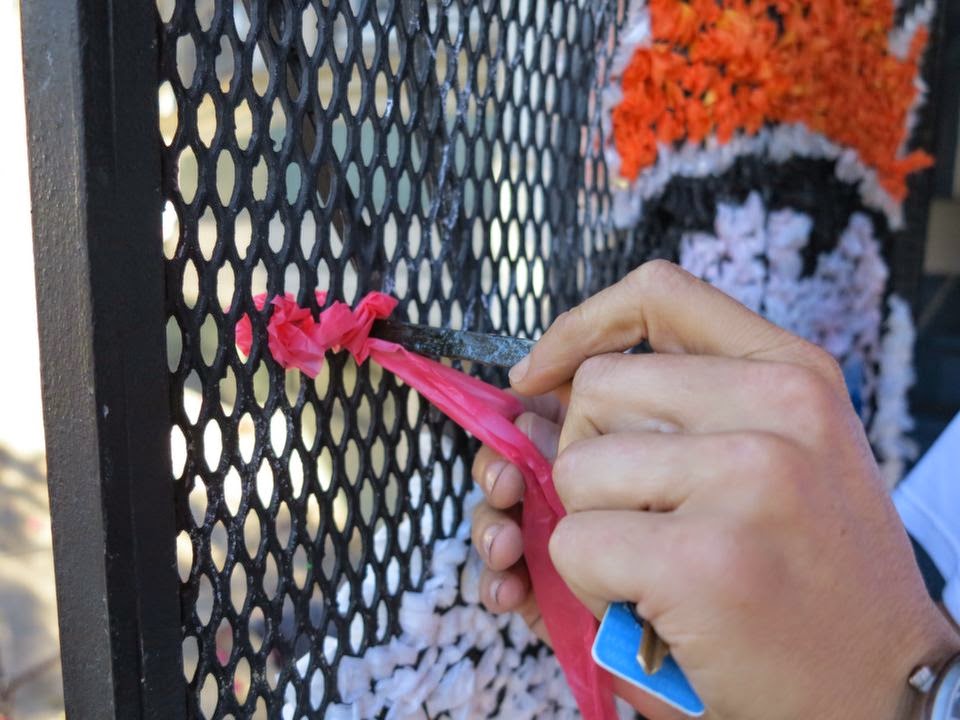 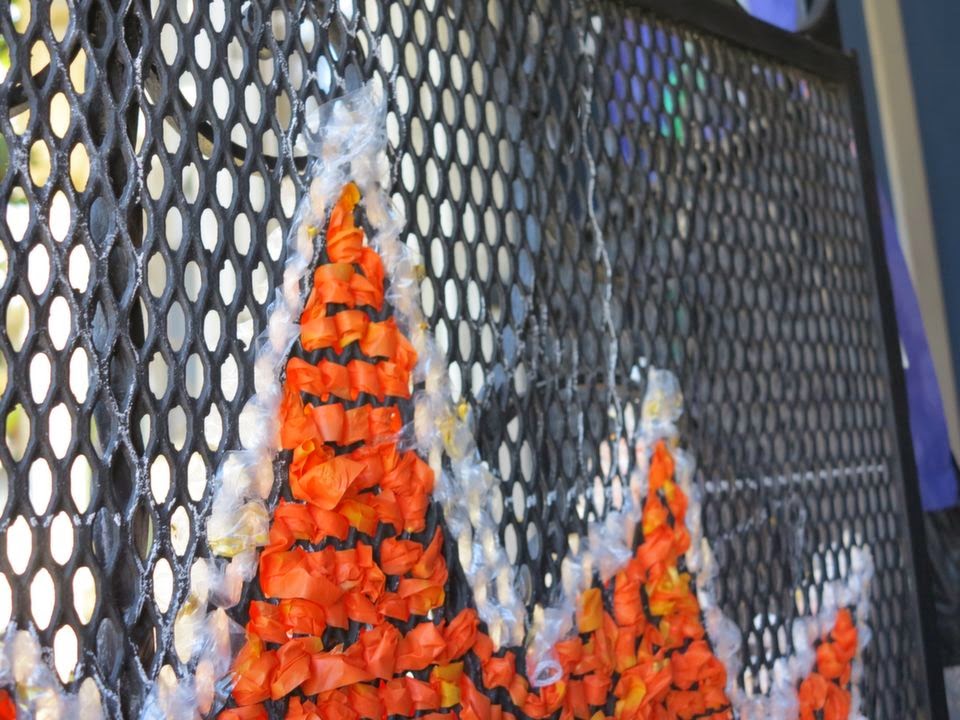 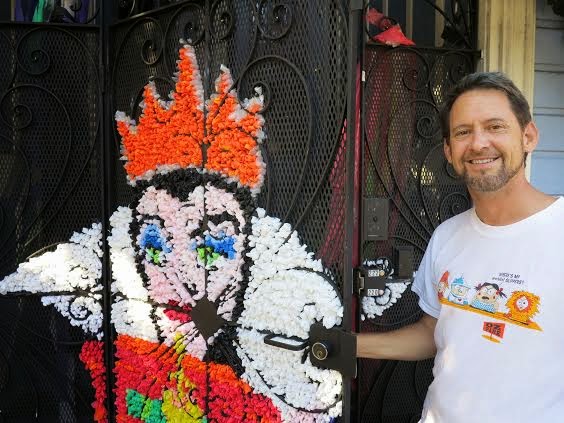 Pictured below left is last month’s piece, entitled Foggy Night, which took 43 tablecloths and 45 hours to complete. “I did this one because someone had anonymously threw a thank you note over the fence on a postcard with a picture called ‘Foggy Night’,” said Young. “So I figured I’d secret-message them right back.” 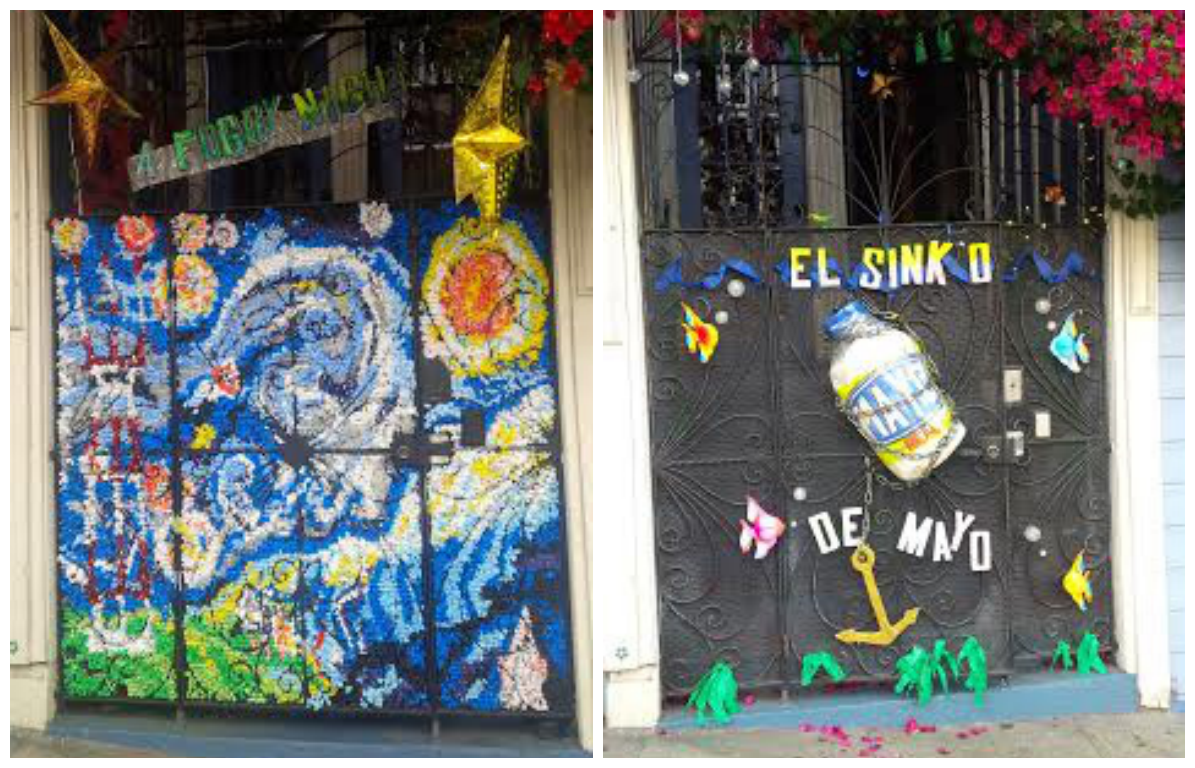 Courtesy Todd Young
Another piece he was particularly proud of this year was May’s installment, entitled El Sink O De Mayo (above right), which serves as a relative departure from his other work due to the fact that it’s not composed almost entirely of plastic tablecloth.
Here are a couple more shots of the door throughout the year: 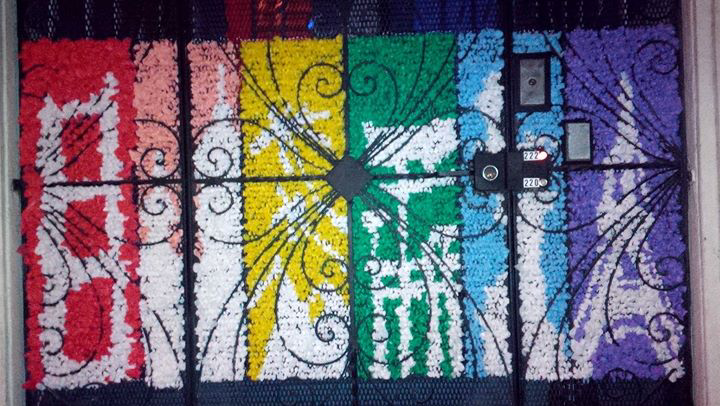 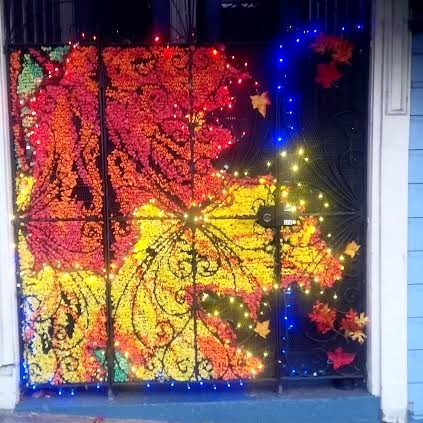 Courtesy Todd Young
We asked Young what he he had in store for November and December of this year, but he told us that he hasn’t quite gotten there yet. However, he is optimistic about this year’s trick-or-treater turnout.
“The first year I started doing this, I got almost no trick-or-treaters, but now I get almost 200.”
With numbers like that, he’s got to be doing something right.

San FranciscoHayes Valley
About 24 hours ago