Weigh In On The Upcoming Carl And Cole Streetscape Design

Photo: SFMTA
By Camden Avery - Published on October 08, 2014.
San FranciscoCole ValleyUpper Haight
You may remember last year when the city installed bulb-outs at the Carl and Cole intersection and busy N-Judah stop. If you've spent the last year afraid that the corner will forever remain an empty expanse of concrete  (more than 15 feet wide and 100 feet long, if you were wondering), fear no longer.Plans are in the works for a streetscaping project that would bring color and life to the intersection, and the SFMTA is hosting an open call survey for anyone who has input on the new designs. The survey is open just a few more days, until October 12th.
A brief flyer describes the scope of the project, which includes improvements to the stops at Carl and Cole, and at Carl and Stanyan. The most notable changes are planned for the southwest and northeast corners of the Carl/Cole stop.
A more detailed, in-depth project portrait includes a variety of architect's renderings (like the one shown above) depicting various possible space configurations and themes for the corridor.
There are two design themes offered for feedback: "checkerboard bistro" (think leafy pseudo-European plaza) and "mid-century modern" (palm and other trees, a "starburst marker"). Both iterations of the plan include benches, sidewalk planters and a colorful pavement design.
For comparison, this is the bistro rendering, southwest corner: 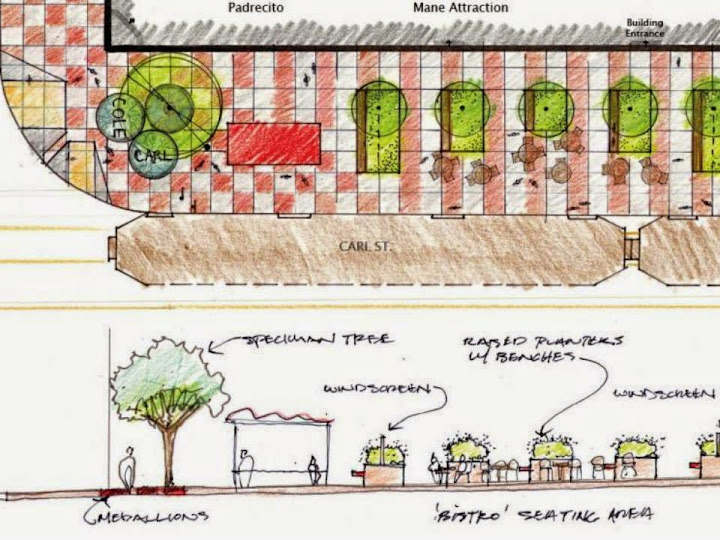 And this is the modern rendering, southwest corner: 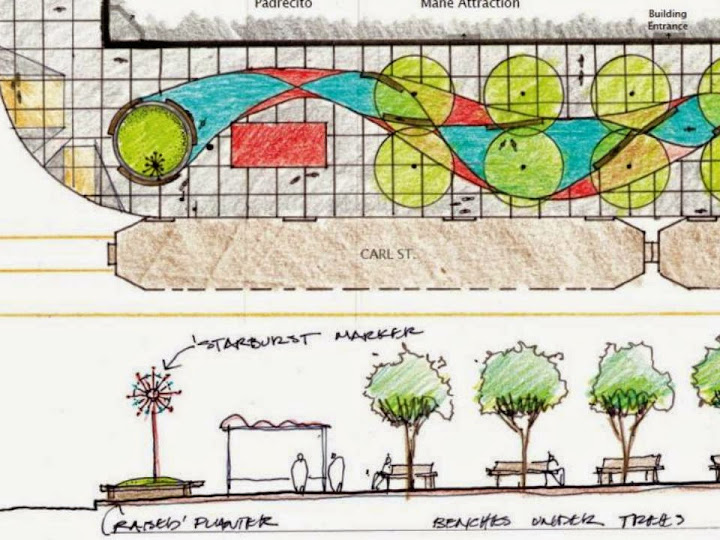 What do you think? You only have until next Sunday, October 12th to make your opinion heard, so head over to the survey if you've got an opinion on the new designs.
Thanks to Josh B. for the tip.
San FranciscoCole ValleyUpper Haight
Feb 03, 2023