Photos: Stephen Jackson / Hoodline
By Stephen Jackson - Published on November 19, 2014.
San FranciscoLower HaightUpper Haight
Last Month, we reported that longtime Lower Haight retail staple Gallery 683 was planning to shutter by the end of this year.
In an ongoing effort to capture some of the living history in our midst, we recently caught up with owner Harry Tsvi Strauch to gather some information about the good old days, as well as some insights about the neighborhood from someone who’s been in and around the Upper and Lower Haight since he was a toddler.
Hoodline: When did you first move to this part of the city? What led you to the Haight?
Harry Strauch: "I was three and a half. I lived in Alamo Square and I went to Lowell High. I was the best high school Latin scholar in the Bay Area. I was also third place in all-city pole-vaulting and on the championship cross-country team. Then I went to Cal, and when I graduated from there I went to Harvard and got a Master’s in Philosophy. Then I moved back to San Francisco in 1962, on Germania Street, with my wife and daughter. I was teaching at The College of Jewish Studies, Jewish Philosophy and Modern Hebrew Language.
"My wife, who was an artist, was tired of pushing a stroller around and convinced me to open a gallery up on Divisadero in Pacific Heights. It was called B’Tzalel. In ’66 we moved to Haight Ashbury. In the early spring there was only one hip store called Mnasidika. The owner there was a lady who later became one of Janis Joplin’s lovers. Later, in July, we opened In Gear, where we sold water pipes, handmade earrings and dresses made by local artists. I think we were one of the first stores to sell hippie-made water pipes.
"In ’69, The Haight went into early demise. We then moved to Mendocino County and raised our two daughters there. From then on, we were back and forth between our house in the Haight—which was next to the Dead’s house, but we had bought it before for the Dead in ’66.
"Then in ’94 my wife noticed the Lower Haight. Back then, the crack dealers were calling it ‘The Razor’. That’s when we opened this store, in October ’94. The thing about the Lower Haight versus the Upper Haight, which is so touristy, was that back in the ‘90s there was some real authentic art. There were writers, musicians, sculptors, strippers, hookers, DJs—lots—both black and white. There were a lot of important DJs. Across the street was Faster Bamboo, a DJ store owned by DJ W and later run by Spunday, a big production company that ran Sunday afternoons at 1015 Folsom. They were there from ’99 to ’03, I believe."
You brought up the DJ scene. Do you see any intersect between that culture and the hippie movement?
"They both share the same interest in getting high from your music, which was a hippie goal. It was certainly the goal of my band, called The Amplified Ohm. Culturally, at least in the early ‘90s, it was a youth culture the same as the hippies. It was a mindset that expanded from this location the same way as the hippie culture did in the ‘60s."
Which figures from the 1960s had the most profound effect on you?
"I’d have to go for three: Timothy Leary, Jerry Garcia, and Janis Joplin. Timothy Leary encouraged all of us to be brave enough to investigate our own consciousness and to use LSD as a vehicle for that exploration. He also encouraged us to question authority, because people forgot how to do that in the ‘50s. Life magazine called the 1950s 'The Silent Generation.'
"Jerry I knew personally. Jerry was probably one of the more brilliant thinkers and musicians of the hippie period, yet at times people thought of him as just a jolly jokester. On any political issue or question he was always brilliant.
"Janis Joplin was also a friend that used to shop with us and we’d provide her with some of her stage clothing. Janis was beautiful in her tragic brilliance, and that’s all I’m going to say." 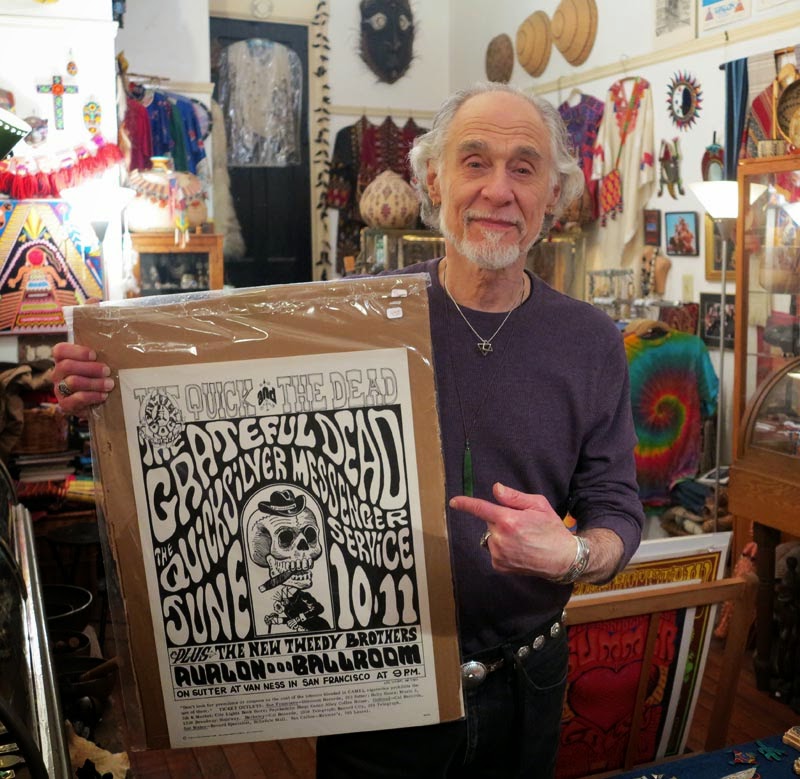 What was it like living next to the Dead?
"Well, [Ken] Kesey and The [Merry] Pranksters used to park the bus next to my house, and some of my band members used to hang out with Neil Cassady and I met him also."
How has San Francisco changed during the time you’ve been here?
"There are fewer young artists living here. There are more techie-type people making lots of money and don’t seem to be spending it locally. That’s affected several businesses here in the Haight.
"There are other things that have happened too. When Hong Kong was acquisitioned by communist China, a lot of rich Chinese came to cities in mainland China and bought up a lot of property. In a way, San Francisco is becoming a city of the rich. There used to be neighborhoods that people could afford, and that’s where the young artists, musicians, and working people would live. Now, a lot of these types of people are moving to Oakland. When we moved to The Haight, a one-bedroom was $650. The other day, one across the street went for $3,150.
"In many ways, the culture of the city is changing. On the other hand, it’s still the dope capital of the world. There are lots of contradictions in the world, buddy. The antinomies!"
What could turn the tide against the change you feel has occurred?
"I really don’t know, if there was some sort of redistribution of wealth, and young people could start moving back to San Francisco. After the first tech bubble burst, and the first wave of techies left, the rents started to come down, but they never got back to where they were in the early '90s. Now, with the new Twitterati, rents are soaring again, which means that rich thinkers, artists, and musicians can live here, but a good portion of young artists are now leaving because they can’t afford it."
What elements of '60s culture are still alive today?
"Well, I think there are two or three ideas. One is that art and culture are redeeming and create a social high that keeps people engaged. 'Think for yourself' is still an ideal and a lot of us still try to follow that. Also, I think we are still questioning authority when we can."
What will you do next?
"I’m going to work on my three bands, Future Flash, Mendocino Mindscape, and The Haight Ashbury Mafia. I will continue to live in Haight Ashbury, and will let people contact me through Facebook."
Gallery 683 will be open seven days a week until Christmas Eve, but with limited hours. Harry suggests you call ahead (415-861-1311) to make sure the shop is open.
San FranciscoLower HaightUpper Haight
About 17 hours ago