Photo: Meaghan Clark/Hoodline
By Meaghan Clark - Published on November 24, 2014.
San FranciscoHayes Valley
A new pop-up art gallery is set to open in the neighborhood this week by way of Hayes Valley Art Coalition co-founder Madeline Behrens-Brigham.
The unusual venue, a vacant shipping container, should be familiar to anyone with a penchant for Ritual Coffee or Biergarten’s authentic German beer. Formerly home to the “Before I Die” art installation presented by The Bold Italic, the empty 160-square foot shipping container is being painted and decorated with wall-to-wall artwork from local painters and photographers in time for a Wednesday, November 26th opening.
Madeline has been trying to secure a permanent location for artwork in Hayes Valley following several successful pop-ups this summer, and the opportunity to showcase local art during the holiday shopping season just couldn’t be passed up. “It was quite the surprise,” she says of securing the shipping container space. “This particular opportunity for the pop-up wasn’t expected.”
Sourcing, promoting and showcasing art in Hayes Valley has been a particular mission for Madeline, who co-founded the Hayes Valley Art Coalition with Russell Pritchard in order to propose and fundraise for sculptures in her neighborhood. A longtime resident of the neighborhood since before it was referred to as Hayes Valley, she’s been a shop owner, artist and proponent of the revitalization of Patricia's Green. “The park is so special—it’s so full of life now, when it used to be the underbelly of the freeway.” 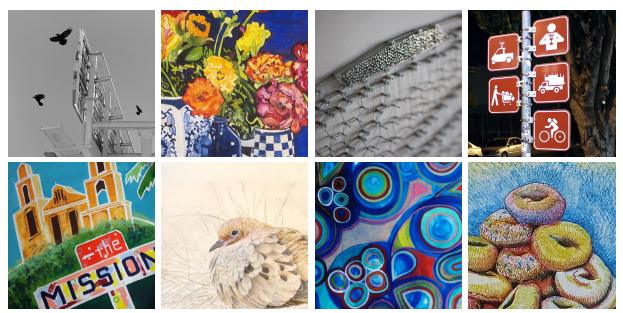 Artwork won’t just be confined to the 8x20-foot space. “We’ll have a courtyard area with benches, as well as outside hanging space; alongside the container there will be wooden panels and artists can hang their work outside,” Madeline added. With so many artists interested in participating, the container will present a revolving list of artwork so you’ll never bored.
“There will be surprises every day,” she said. “If it’s a nice day, you never know who will show up.” Already on the docket is what Madeline calls ‘Tea Time Talks’ for artists to talk about their work, a performance by opera singer Johanna Bronk, face-painting on Saturdays, and sing-a-longs with various guitarists.
If you’re not in the market for an original piece of art, there will also be t-shirts, bags, and greeting cards for sale—all created by Hayes Valley Artists.
The Hayes Valley Artist Pop-Up is scheduled to open on Wednesday and stay open through December 24th, with hours from 9am to 7pm. As an added benefit, the pop-up will be open for Small Business Day on November 29th (expect later hours if there’s foot traffic) and an upcoming block party on December 5th.
San FranciscoHayes Valley
Sep 24, 2021