Photo: Roy McKenzie/Hoodline
By Roy - Published on December 03, 2014.
San FranciscoCastro
Though the Castro neighborhood looks arguably much better and residents and visitors alike are enjoying the more spacious sidewalk following progress on the Castro Streetscape Improvement Project, the work dragged on nearly two months after the deadline of the Castro Street Fair on October 5th.
Even after the grand ribbon-cutting ceremony the day before Halloween, which celebrated the "completion" of the Castro Street project, work on the final leg of the project—resurfacing and reconfiguring pedestrian walkways for Jane Warner Plaza—was not completed.
Last week, just before the Thanksgiving holiday, crews quietly wrapped up on the last leg of the project at the plaza, finally laying the project to rest for good.
Jane Warner Plaza now features a wheelchair accessible path (which oddly does not connect with the curb ramp) that zigzags through the resurfaced plaza. Beyond the plant barrier on the west side of the plaza is a new path that allows you to bypass walking through the plaza altogether in order to get to the crosswalk that traverses Market Street. 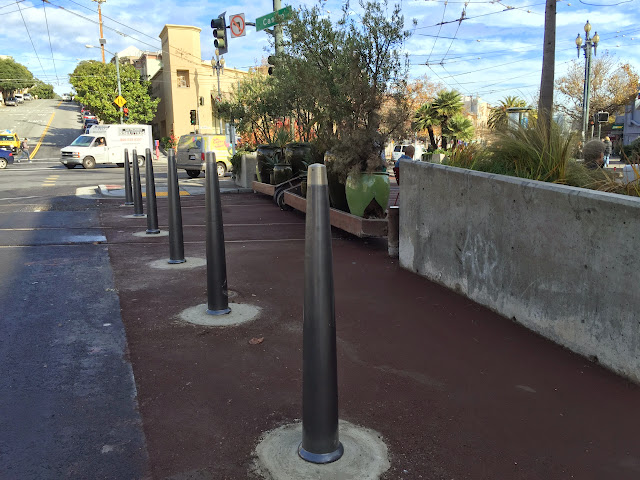 Some commenters have shared the view that the neighborhood's supervisor, Scott Wiener, may have been seeking to score political points before his successful re-election in November by hosting a ribbon-cutting celebration before the project was actually completed. The BAR quoted Terry Asten Bennett of Cliff's Variety as saying that shutting the street on a night where businesses could finally get back to normal felt like it was a "slap in the face" to local businesses, some of which suffered an economic impact from reduced foot traffic throughout the construction project.
However, neighbors and local businesses will no doubt breath a sigh of relief now that the jackhammering and heavy equipment is officially, finally, out of the neighborhood and business can get back to normal.
San FranciscoCastro
About 20 hours ago