SFDPW
By Walter Thompson - Published on December 09, 2014.
San FranciscoInner Sunset
Sunset dwellers, get ready for a host of changes headed to Irving Street beginning next year.
In 2015, construction begins to implement the Inner Sunset TEP Streetscape Project, a plan that used transit studies, resident surveys and data from traffic and pedestrian accidents to create design proposals that “enhance the beauty and walkability of Irving Street,” according to SFMTA. According to the agency, these proposals will reduce travel times along the project corridor by 1.5 minutes in each direction, a 25 percent reduction. 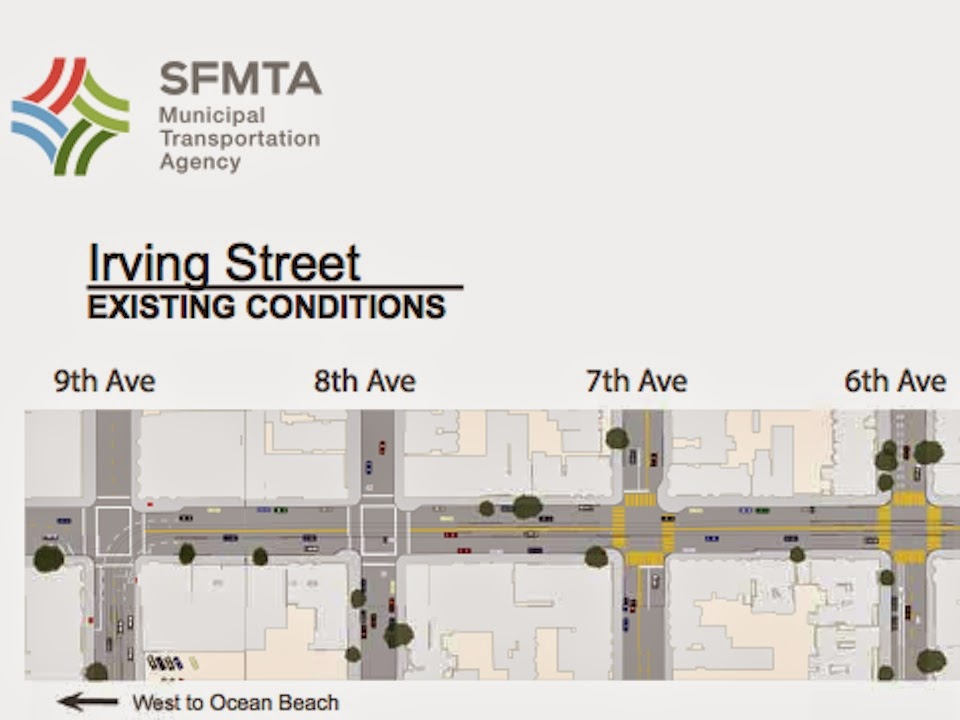 About 40,000 people ride the N-Judah each day, so plans propose that sidewalks will be widened to promote faster boarding and pedestrian safety, and bulb-outs will be added along Irving at 3rd, 4th, 7th and 9th avenues to speed up street crossings and create areas for public art and seating.
According to DPW Project Manager Mike Rieger, the Inner Sunset renovations are still in the design phase and won't be finalized until June 2015. Bids and proposals will be accepted over the summer so contractors can start work in November/December of next year. Rieger said the work will also include sewer repair and work on AWSS, the auxiliary water-supply system created after the 1906 earthquake. 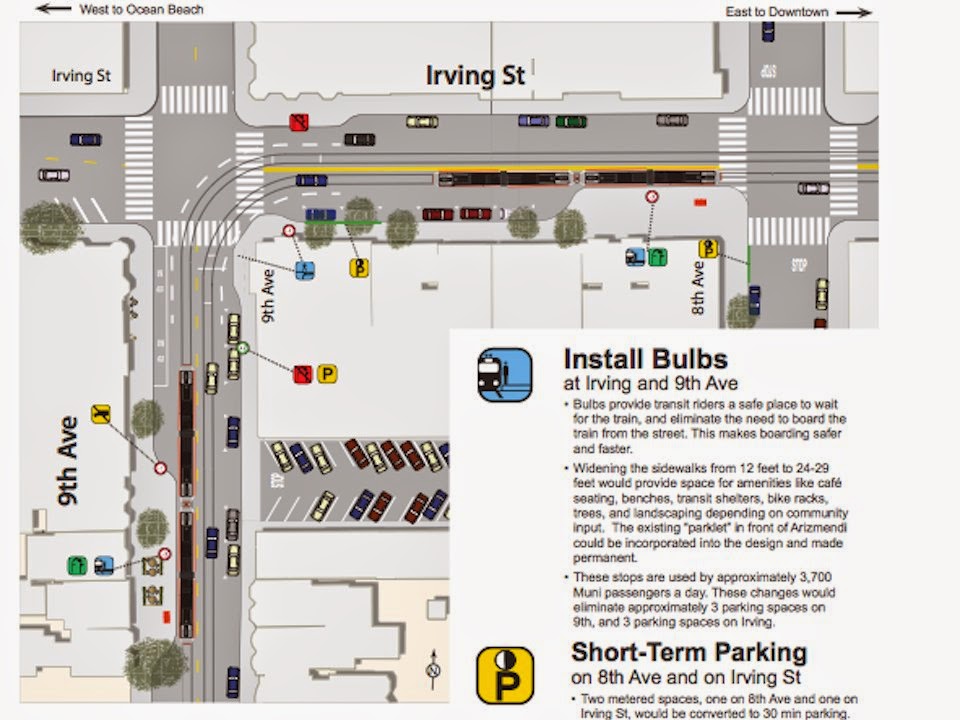 All this comes from the Road Repaving and Safety Bond, a measure introduced by Mayor Ed Lee in 2011 that would authorize $248 million in bonds to renovate the streets of San Francisco. Proposition B’s pitch: fix potholed streets, increase safety and create new jobs without raising taxes. With broad support from the Board of Supervisors and 68 percent of voters, the measure passed in that November's election.
Prop B funds two dozen citywide streetscaping projects, but the Department of Public Works reports that approximately 50 more projects are connected to the paving program.
In the Outer Sunset, the Irving Streetscape Improvements Project is using $3 million of Prop B’s bounty to spruce up the Outer Sunset’s chief commercial strip with new traffic signals, landscaping, sidewalks and streets that “provide a safer and more inviting environment,” according to the Department of Public Works.
Extending along Irving from 19th Avenue to 27th Avenue, many of the proposed changes on Irving address traffic and safety, but the plan also includes colorful crosswalk treatments, bamboo-filed planters, and, of course, parklets. 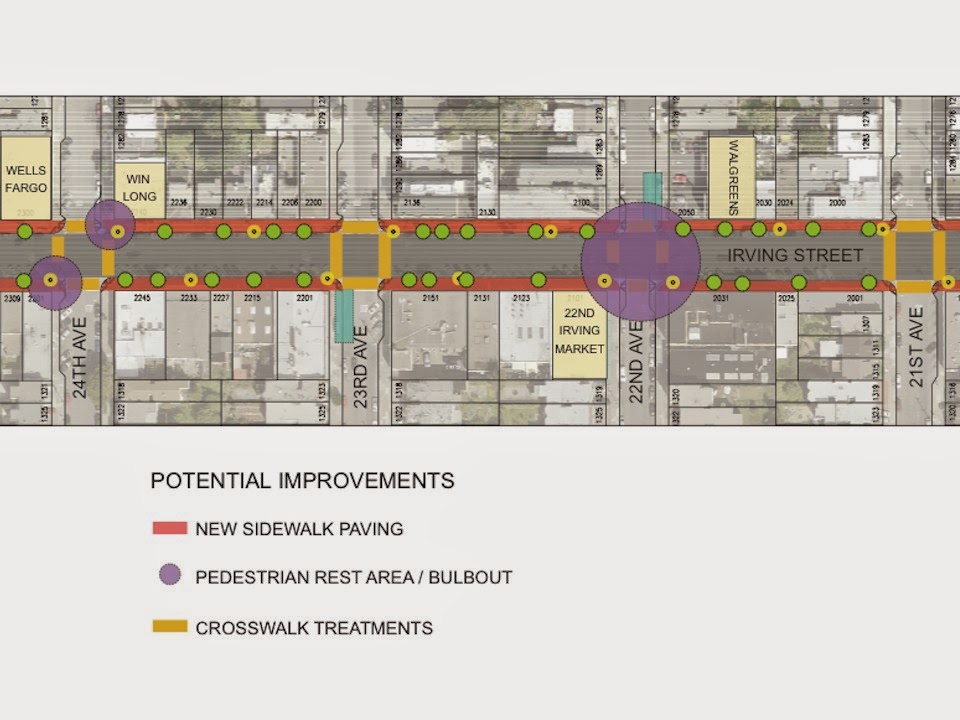 The final list of projects funded by Proposition B will be decided by the Mayor and Board of Supervisors;  the Planning Department, SFMTA and DPW have gathered data and comments from merchants and residents to inform the process. A net loss of parking spaces has been a contentious issue, and efforts to widen sidewalks in both the Inner and Outer Sunsets were rolled back after some locals expressed strong opposition. In an SFMTA survey that asked, “how do you get to Irving Street?” just 23 percent of respondents said they drove: the rest walked, biked or used Muni.
Approximately 400 metered parking spaces lie within the Irving Street project’s boundaries. Merchants were initially opposed to using 12 of them to create parklets until they saw the economic benefits, according to Streetsblog SF.
The Irving Streetscape Improvements Project overlays the Outer Irving Invest In Neighborhoods initiative, a project led by the Mayor’s office that “provides focused, customized assistance to meet the specific needs” of neighborhood business districts. Invest in Neighborhoods is also bringing nonprofit groups and city agencies together to help small businesses acquire loans and facade improvement grants within the project area. 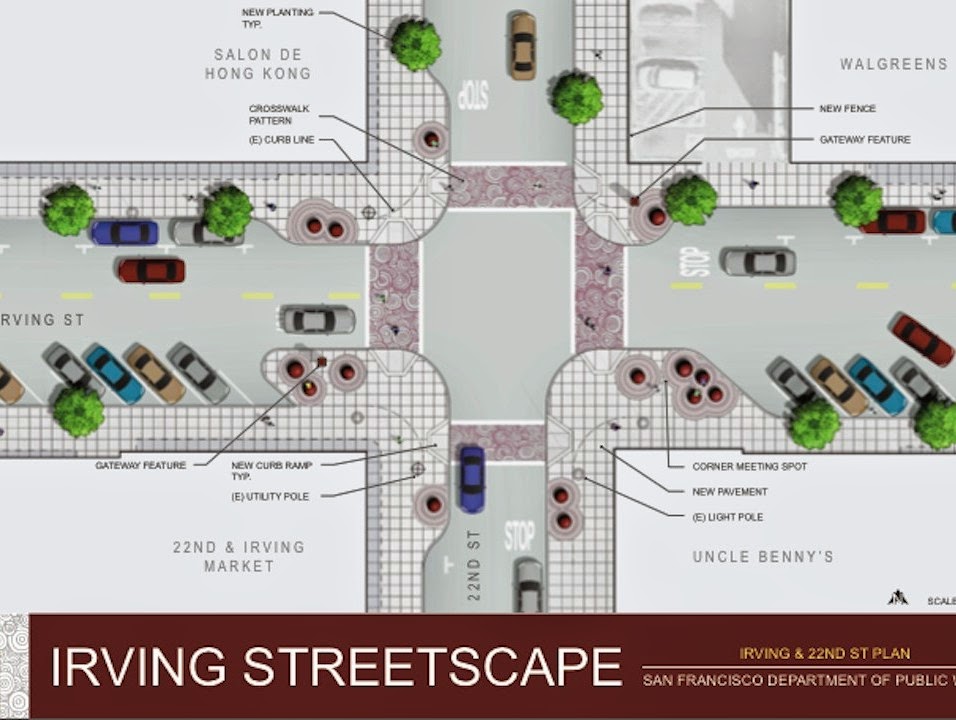 According to a DPW map  of Prop B projects, several curb ramps have been completed that improve accessibility, but greening and streetscaping projects are still in the planning phases. The project timeline calls for the city to receive bids and proposals over the winter so construction can begin in February 2015.
Rieger said the Outer Irving streetscaping is still in Phase 1, but the city will start advertising contracts in February to gather bids for projects. As part of this work, DPW has extended sewer replacements and road repair from Funston Avenue to the Great Highway.
As part of our Inner Sunset reporting, Hoodline will continue to cover these improvement projects when they break ground in 2015, so stay tuned for updates as the projects get going.
San FranciscoInner Sunset
Feb 03, 2023