Photo: Andrew Dudley / Hoodline
By Andrew Dudley - Published on December 02, 2014.
San FranciscoLower Haight
Some much-needed rainfall is causing a veritable ark-full of headaches for local residents this morning.
Various intersections along the Wiggle and surrounding streets are flooded as precipitation has overwhelmed the local sewer system. The above photo was taken at Oak and Scott, an already-treacherous corner where the bike commuters of the Wiggle meet the cross-town auto traffic of Oak Street. A few blocks east, resident Ted E. posted a photo on NextDoor of similar flooding at Oak and Webster: 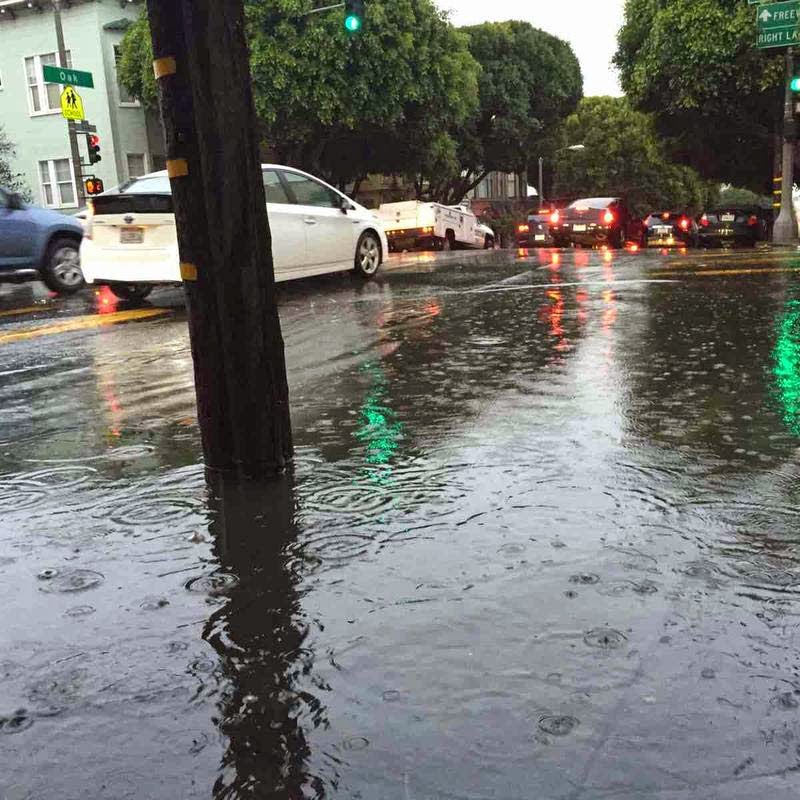 We're also hearing reports of distress from aspiring Muni commuters, as they watch packed bus after packed bus pass them by on Haight Street.

@sfmta_muni FOUR buses (6, 71) have passed haight @ divisadero with no room to add passengers. When can I get to work this morning???

CBS reports that the entire Bay Area has been issued an urban flood advisory by the National Weather Service through 7:30pm today. The Wiggle is particularly susceptible to flooding; as the former site of an ancient creek, water naturally pools along the route.
As part of the Wiggle Neighborhood Green Corridor project, a couple of city agencies will be teaming up to install features like permeable pavement along the Wiggle to hopefully mitigate flooding on days like today. Unfortunately, that project is still in the design and planning stages. So for now, grip your umbrella, watch your step, and try to stay safe (and dry) out there.
Update 12:45pm: The weather has apparently contributed to the downfall of a large tree on the 700 block of Waller, between Scott and Divisadero: 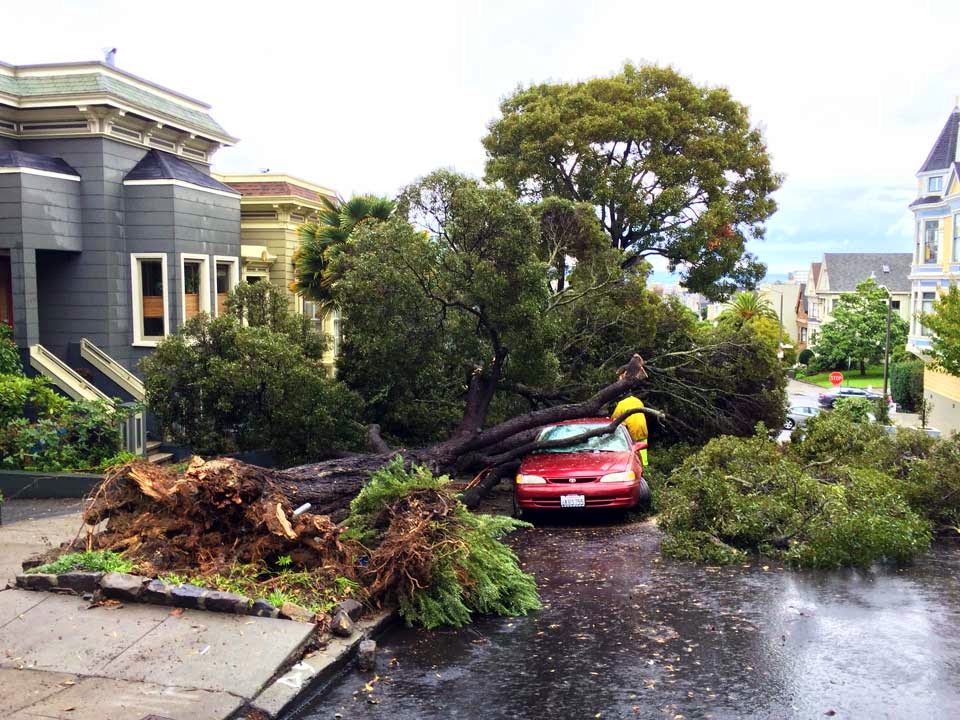 Reader Anna H. tipped us to the toppling around noon today. As you can see in these photos, the tree fell eastward at its roots, crushing the windshield of a Toyota parked nearby. 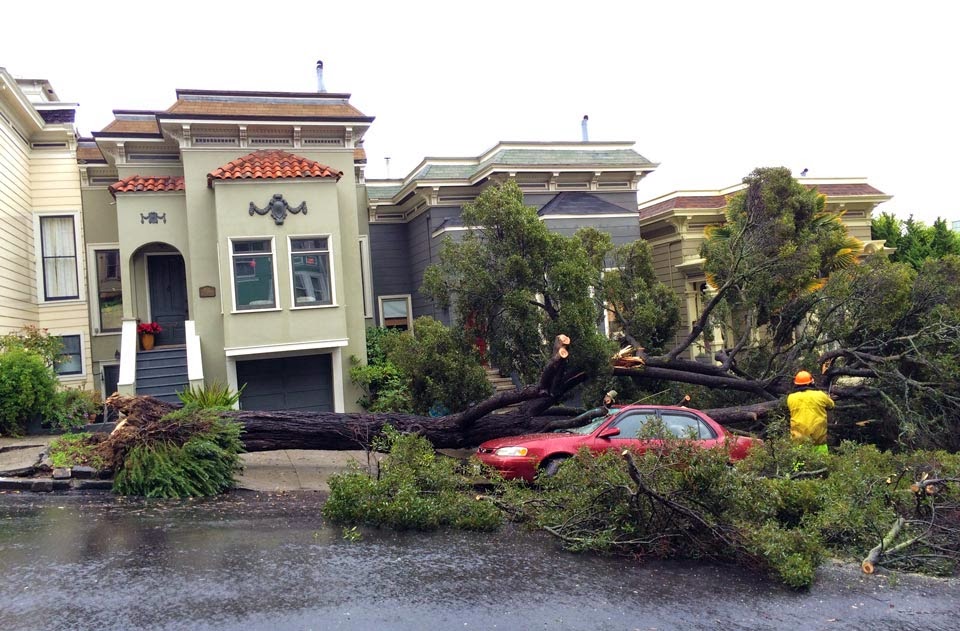 An SUV parked behind the Toyota appears to have escaped significant damage by a matter of inches. 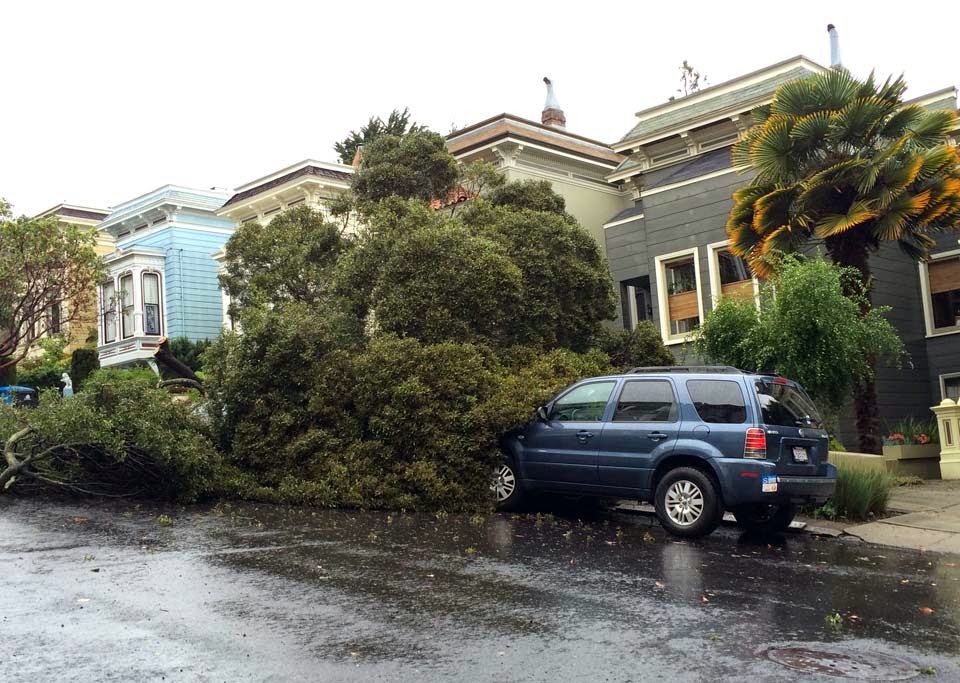 The tree was located just a few feet away from the spot where a water main broke in March of this year, sending a deluge of water all the way down to Haight Street. And back in 2012, as commenter PorkedBun reminds us, the street was the site of a giant sinkhole which nearly swallowed a utility truck.
In other words, this is apparently not our neighborhood's luckiest block.
San FranciscoLower Haight
May 24, 2022