Photo: George Lester Photography
By Steven Bracco - Published on December 04, 2014.
San FranciscoCivic CenterDuboce TriangleCastroMid-Market
Get ready for some scantily-clad Santas coming your way over the weekend, as the 6th annual Santa Skivvies Run is coming up this Saturday, December 6th.
Not to be confused with SantaCon, the underwear run is the SF AIDS Foundation’s holiday fundraising event, which has continued to grow in popularity over the years. For the past five years, the event has started and ended in the Castro at the Lookout (3600 16th St.) with a short loop through the neighborhood and back to the bar to warm up with a few drinks.
With this year’s event set to include over 400 runners, it was necessary to create an all-new route. SF AIDS Foundation Events Associate Josie Larimer told us that the organization also wanted to expand beyond just one neighborhood and “give this event more visibility in the greater San Francisco community."
Instead of just staying in the Castro, this year's 1.6 mile route will begin at Civic Center's UN Plaza at 9am, right near the Foundation’s headquarters, and make its way up Market Street towards the Castro. The event will finish with a block party on Noe Street outside the Lookout. "Starting in UN Plaza will engage more community members and give our participants an opportunity to shine through several San Francisco neighborhoods," said Larimer. 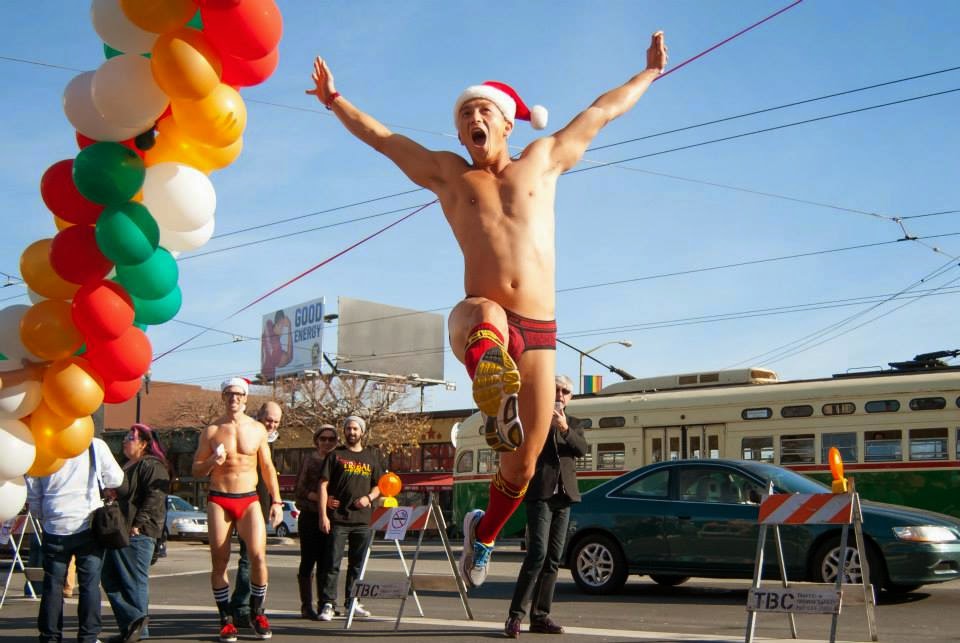 Santa Skivvies/Facebook
The Santa Skivvies Run is open to all, and the money raised goes towards the variety of services provided by the Foundation. Currently in the Castro, construction crews are hard at work building the new men’s health center at 474 Castro St. that will combine the services of Magnet, Stonewall Project and the Stop AIDS Project. The new center, which plans on opening in early 2015, seeks to “establish an innovative model for the current and future response to HIV/AIDS-one built around health and wellness, not sickness and disease.”
Though storms have been passing through the Bay Area, it looks as though the weather will be clearing up just in time for the event on Saturday, so there’s no excuse not to come out and enjoy the event (even if you just go out and watch the Santas running by in their festive attire).
If you'd like to participate, there's still some time to register as an individual or team, pick out a cute pair of underwear and do some last-minute fundraising. The cutoff for fundraising will be tomorrow (Friday Dec. 5th) at midnight.
San FranciscoCivic CenterDuboce TriangleCastroMid-Market
About 17 hours ago