Community Vs. Connectivity: A Tale Of Two Coffee Shops

In our coffee-rich neighborhood those with an elite taste in beans can choose from Blue Bottle at Vinyl, Ritual at Mojo, or Four Barrel at The Mill. Finding somewhere to work with Internet, however, takes a little advanced planning.

For freelancers and people who work from home, there are generally two types of cafes: those that have WiFi, and those that do not. To get a idea of some of the decisions that go into a public WiFi or no WiFi policy, we talked to people at two of the busiest coffee shops in the area: The Mill and Matching Half.

Pick any morning of the week and The Mill's selection of tables is bound to be more than half full with babies in strollers, friends meeting for breakfast, a job interview here and there, or someone sipping a coffee solo. But no matter how crowded The Mill gets, there's one thing in short supply: laptops. Books, journals, iPods, and the occasional bike leaning against the wall, sure, but computers are generally an anomaly in the busy coffee shop. 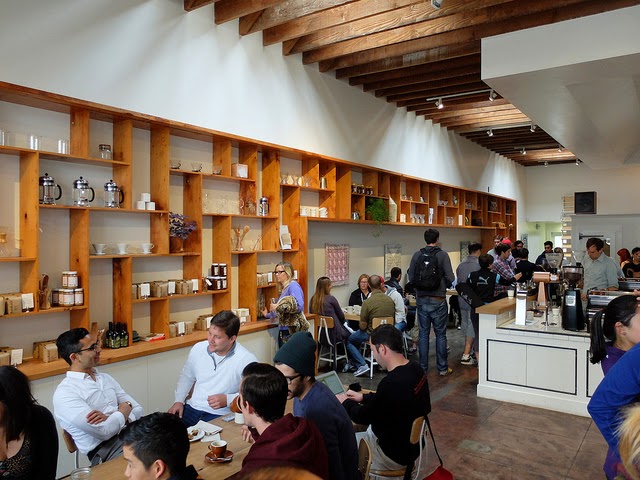 "It really has less to do with keeping people from lingering or taking up space without paying than it does with the idea of fostering a sense of community," says The Mill's Mark Brei. The space, he points out, is community-based. The large communal table is conducive to conversation, and forces people to sit adjacent to or across from each other. Even the small tables along the southern edge of the cafe are connected by a long pew, meaning that it's hard not to get to know your neighbor as you squeeze into your seat.

"We really strive to make the Mill a light, airy place for people to meet and talk," Mark says. "It's sure a lot easier for people to strike up conversation if everyone isn't plugged into a laptop."

Over to the west, Matching Half is similarly busy, though with a much smaller space. Known for its jalapeño pop-tarts and generous afternoon sunlight, it's not uncommon for every seat in the place to be taken. But here, laptops are everywhere. On a weekday afternoon almost everyone who's sipping coffee on the corner of McAllister and Baker streets will be working on their computer. 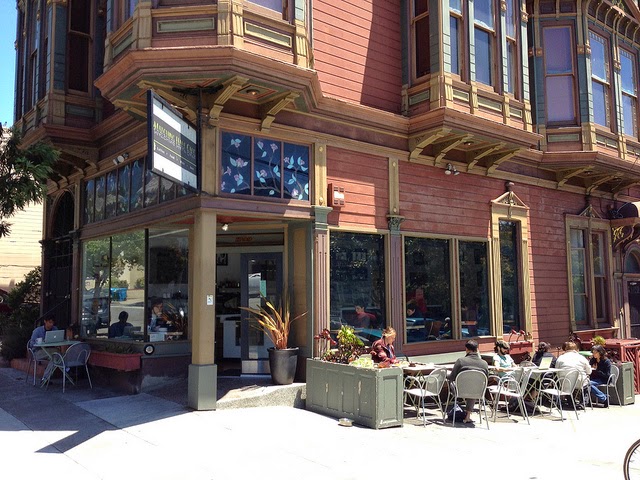 Matching Half proprietor Jason Wahlberg is aware of the perks of having free WiFi available for his customers. "We always strive to create a warm and welcoming environment for people at Matching Half, and this includes a space for work and study. Some of our best, long-term customers work via computer at our cafe almost every day and we are very glad to have them. "

On the other hand, he too acknowledges the importance of a space that fosters community interaction. He points out that computers tend to cause people to be more insular, and less prone to strike up a conversation with one another than if someone was writing in a notebook or reading a book. "For us as a business and as workers in this environment, the best days are almost always the ones where less people are engrossed in their screens and more people are talking with each other, finding human connection and engaging with the world around them," says Jason.

Community engagement aside, there's also the financial side of having WiFi available to customers. Matching Half in particular operates out of a small location, which means that when people camp out with laptops for much longer than it takes to drink a cup of coffee, it limits the availability of seats for other customers. Spend any long afternoon there and chances are you'll see someone come in, scan for a free table, and then leave.

Jason's solution is to limit the outlets available to one (for Matching Half newbies, it's located under the cream and sugar shelf). With no external power source, patrons can only work on their computers until batteries die. However, with MacBook Airs that boast a long battery life with every charge, this can still be a while.

"Apart from having only one working power outlet, we don't try to police the amount of time people occupy a space," says Jason. "We just hope they have the courtesy to make room for other guests when's there's a need. And maybe look up and smile every once in while. "

For better or worse, modern technology and 4G networks may soon make business owners' decisions moot. Mobile hot spots are now more frequently included in cell phone carriers' plans, meaning that even if a coffee shop chooses not to have public WiFi available, consumers can just log on through their phone. 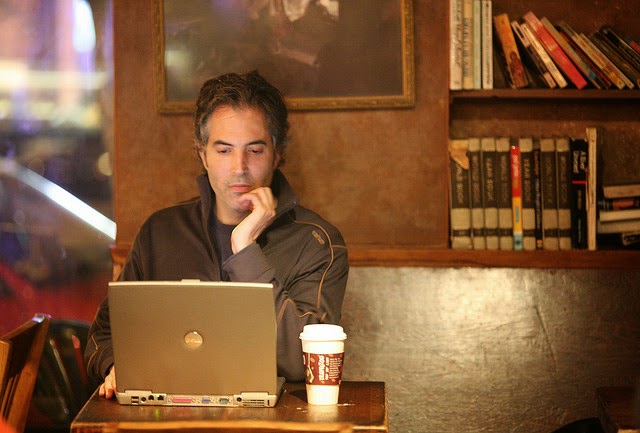 As to who else offers WiFi in the neighborhood: Matching Half, Chile Pies and Central Coffee are NoPa's resident WiFi centers. Along Divisadero there's Oasis Cafe, Cafe Abir, Bean Bag, and Vinyl.

Mojo Bicycle Cafe used to offer WiFi, but canceled it in the fall, shortly before expanding its beer taps. Owner Remy Nelson said the number of laptops was getting too high, and pointed out that when people work in an office they (or their company) is paying for the space. At coffee shops, the wireless and space is free, but often comes at the owner's expense.

In the end, coffee shops' decisions to run WiFi can depend on a number of issues: community engagement, loitering problems, or just the cost of upkeep. As for whether or not we'll ever see free Internet in our public parks, only time will tell.