Hikers Versus Cyclists Inside The Sutro Open Space Reserve

Hoodline/Walter Thompson
By Walter Thompson - Published on January 05, 2015.
San FranciscoInner Sunset
The Mount Sutro Open Space Reserve is one of San Francisco’s most idyllic areas, but even these woods aren’t safe from our city’s ongoing pedestrian vs. cyclist right-of-way issues.

Several trails wind through Mt. Sutro’s eucalyptus forest, a thriving non-native habitat that sustains woodpeckers, great horned owls, hand-holding elderly couples, determined joggers and mountain bikers. Maintained by UCSF and a team of volunteers known as the Sutro Stewards, visitors may wander recreational trails for hours. Depending on one's location and time of day, a person could forget that they’re in the center of San Francisco.

"As the popularity of the area has increased," notes the Sutro Stewards, "so have some conflicts between user groups and even for users within the same groups." To that end, a few signs encouraging hikers, joggers and cyclists to be more mindful and considerate have been placed to promote awareness. 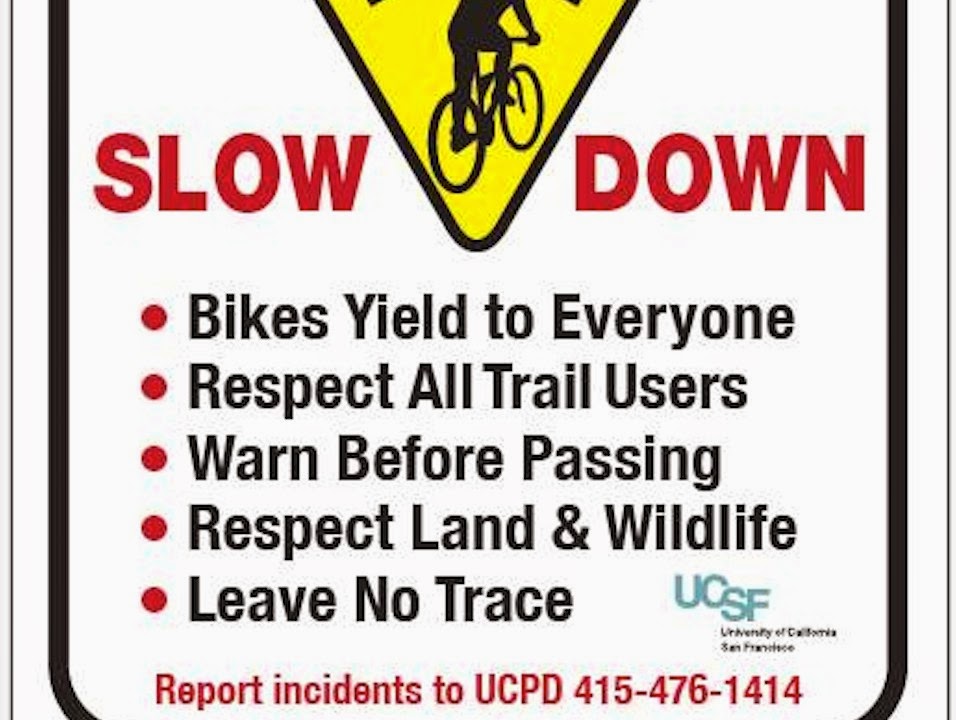 Because UCSF owns the majority of the reserve, UC police are responsible for enforcement, including the first reminder, “Bikes Yield to Everyone.”
However, although many paths are wide enough to be bike- and pedestrian-friendly, due to erosion and topography, several are single-file only. This creates a bottleneck which leaves pedestrians little choice but to yield to oncoming bike traffic. During a series of visits, Hoodline observed that pedestrians stopped or moved to let cyclists pass 100 percent of the time.

Near the Stanyan Trailhead, a fallen tree and a steep slope encouraged most people on foot to step uphill and off the path when faced with a bike during recent visits. On one afternoon, the ratio of pedestrians to cyclists on the Lower Historic and Edgewood trails was approximately 5 to 1.

“Where am I supposed to go?” said one woman on foot, who asked that her name not be used, after she stepped aside for a descending mountain biker. “Do I scramble uphill off the path, or down there?” she said, pointing to a gully filled with shrubs, fallen logs and other detritus.
But it's not just cyclist-on-pedestrian tension. "All open space users need to recognize the rights of others," notes the Sutro Stewards, pointing out that a cyclist who is on a trail ride "only to be forced off the trail by a high speed downhill rider, or runner with headphones oblivious to others," bear equal responsibility for good trail etiquette.

SF Urban Riders, a group that promotes off-road biking, is currently working with SF Parks & Rec, Sutro Stewards and UCSF to come up with sustainable practices for using this open space. If you'd like to get involved, contact the group to find out when members will be meeting or volunteering on-site.
In the meantime, if you’re interested in volunteering to help with trail maintenance or habitat restoration in the Mount Sutro Open Space Reserve, contact Craig Dawson at Sutro Stewards or stop in at the next trail stewardship volunteer day on Saturday, January 17th, from 9am to 1pm.
San FranciscoInner Sunset
May 13, 2022