Hoodline is following the proposed police redistricting plans in central San Francisco. Here’s the latest on the Tenderloin – look for more stories from us in this neighborhood in the coming weeks.

Last night, over 100 people filled the auditorium at Kelly Cullen Community for a community meeting about re-drawing the boundary lines of the Tenderloin's police district. As we mentioned earlier this year, San Francisco is taking a critical look at its police district boundaries, and is proposing several changes. The most significant of these may take place in the Tenderloin.

The map below shows the current district (orange lines), as well as the proposed new district (blue lines). The new plan proposes an expansion from the current triangle southward to Mission Street, and would expand east to west from South Van Ness to 3rd Street. 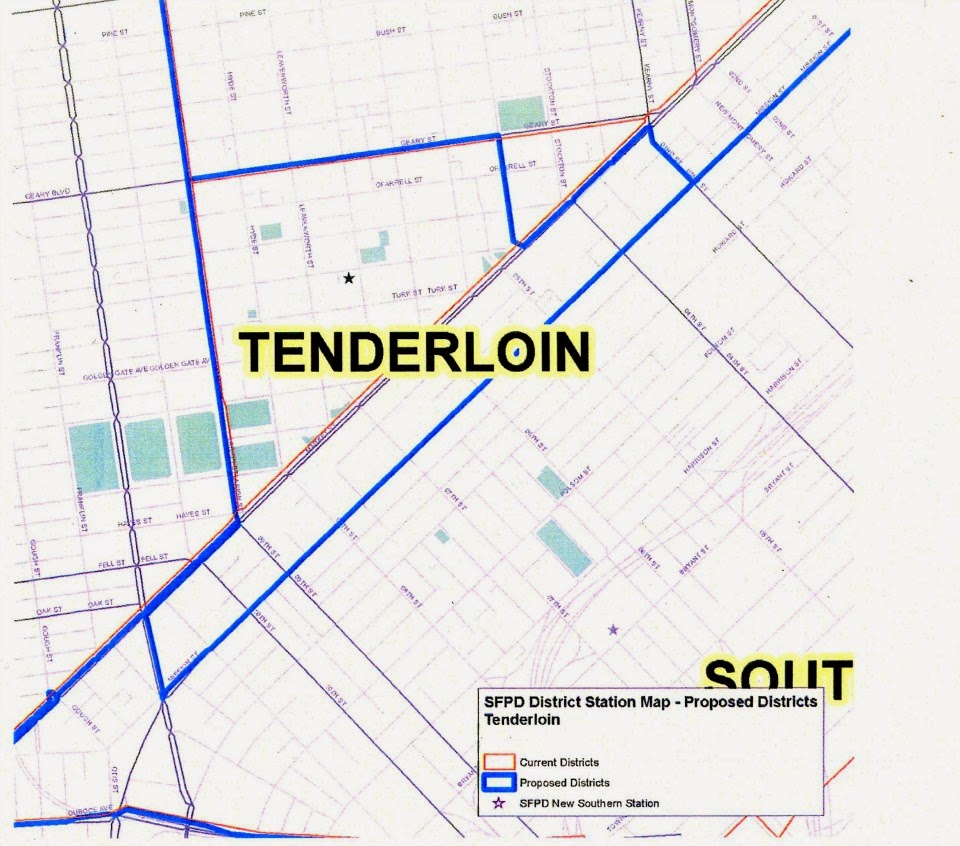 In attendance at last night's meeting were Tenderloin Police Captain Jason Cherniss, SFPD Police Chief Greg Suhr, and District 6 Supervisor Jane Kim, as well as a number of cops who currently patrol the Tenderloin area. The community's residents who came out were a diverse group, ranging from those who live in local SROs to community leaders and non-profit employees. The overall tone was a jovial one, with people hugging each other, saying hello to friends, passing around candy and cheering when someone they knew got up to speak.

Police Chief Greg Suhr started out the meeting by outlining some key statistics about the neighborhood. The Tenderloin currently has 25,000 residents, 3,500 of whom are children (the highest density of children in one neighborhood in San Francisco). Thanks to St. Anthony's and other public food kitchens, over 4,000 free meals are served to the community per day.

Expressing his personal love for the Tenderloin, Chief Suhr explains that his first deployment into the city as a cop was in that very neighborhood, between 1981 and 1984. "You're beholden to where you're broken," he said. He also pointed out that the boundary lines in the map above are "a starting point," and are in no way a final map.

In regards to some of the staffing infrastructure that will need to be changed with new boundaries, Chief Suhr noted that 60 new officers would need to be deployed in the new Tenderloin district. He explained that the SFPD is currently understaffed by about 300 officers, but 100 trainees are currently in the academy.

Tenderloin Police Captain Cherniss explained that no beat cops will be removed from their current territories. For example, the 24 beat cops in the mid-Market area will stay in mid-Market, regardless of whether they belong to the Southern or Tenderloin police stations. He also pointed out that if the expansion does go through, Tenderloin's police district will include Holiday Plaza, the Flood Building, Twitter, several Muni and BART stations, the Renoir Hotel, and the Westfield Mall.

Of the 50 or so members of the Tenderloin community who voiced their opinions and concerns, many were part of local organizations. Central City SRO was in attendance, as was Dish, Local 87, Safe Passage, Tenderloin Neighborhood Development Corporation, Future Bars, and the Tenderloin Housing Clinic. Residents from Edgeware Hotel, Jefferson Hotel, Harland Hotel, and Seneca Hotel also spoke up about the issue.

Although dozens of concerns were raised, two specific issues were brought up time and again.

The first was concern from residents who live on the edge of the Tenderloin's current police boundaries. Citing slow response times from Northern Station, one resident also told stories of drug dealers in front of his house hopping across the street from one district to another depending on what district's squad car was approaching.

One resident of the Harland Hotel said "living on the border of two police districts is a nightmare. The Tenderloin should absolutely include Geary up to Polk."

Many of the border residents pointed out that the Tenderloin SFPD is familiar with the issues they see happening on their doorsteps. More than any other police station in the city, they argued, the Tenderloin SFPD knows mental health issues, violent crime, and drug dealing. A common opinion at the meeting in favor of expanding the borders so that residents who weren't in the Tenderloin district could become part of it.

Another common issue raised concerned support for the expanded district boundaries. With response times already slow, residents worry that cops will be even more delayed with a larger territory. Many also wanted their current neighborhood cops to stay put.

Brenda Washington, who's been in and out of Jefferson Hotel for the past 20 years, stated, "I don't want to lose my police that patrol my neighborhood. Response time is slow already. Who will they respond to faster? Malls or my neighborhood?"

When Supervisor Kim spoke, she expressed her love for the community. "More than any neighborhood I've worked in, this neighborhood shows a generosity, compassion and a commitment to safety," she said. However she also expressed that she hasn't yet taken a stance on the expansion of the Tenderloin District. "Boundary lines are important, but so are resources to support them," she pointed out.

The Tenderloin community meeting is the first in a series that invites city residents to express their views on the proposed boundary changes. The next meeting will concern Northern Station and Park Station and will be held on February 11th at 6pm in the Northern Station's community room (1125 Fillmore St.).

By March 4th, all community meetings will have taken place, and the solidifying of boundary lines will begin. We'll keep you up to date on what changes are going to be made.