Bound Together: A Look Inside Haight Street's Anarchist Bookstore

The sign outside the door may describe Bound Together as an anarchist bookstore, but a passing tourist or local who's never been inside might not know about the long history of the collective, which dates back to the mid-1970s.

We stopped in to chat with Joey Cain, the bookstore's longest-running member. According to Cain, It all began in 1976, when a group of six or so people banded together with $50 each and the idea of opening a store focused on do-it-yourself books.

Back then, the DIY term had a different meaning than Etsy offerings and Pinterest boards on home decor, and the focus was more on urban issues, ecology, gardening, and urban sustainability, i.e. how to live on your own terms without relying on larger corporate forces. 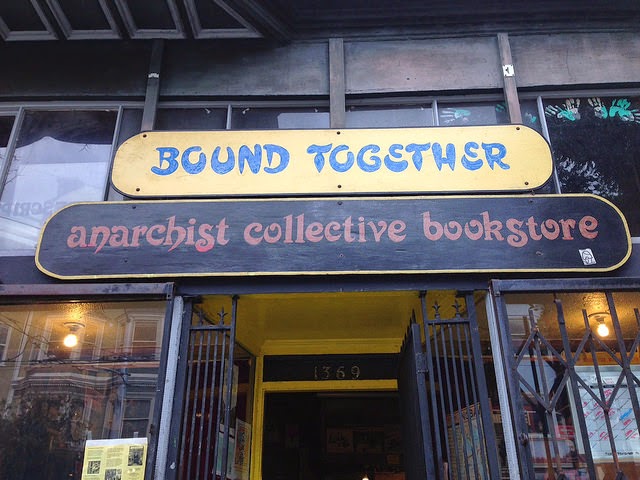 The collective used its pooled resources to rent out a former pharmacy on the corner of Haight and Ashbury streets and stock the bookstore with inventory. The space had been a pharmacy for 60 years, and the collective kept much of the wooden interior, shelving, and cabinets in place. [Update: Cain lets us know that the original store was at Hayes and Ashbury from 1976-1983 and that there's another member who's been there long than him.]

The retired pharmacist, who was also the bookstore's landlord, would stop by as well, contributing to the convivial atmosphere of the bookstore. The rent was $60 a month at that time, and a good day was when $20 to $30 in sales were made.

In 1983, the benevolent landlord passed away and his son decided to sell the property. The collective moved to its current location at 1369 Haight St., taking with it some metal cabinets from the former pharmacy, which still sit behind the counter today.

Through the past 33 years, Cain told us there've been plenty of adventures, like the time when the bookstore was threatened by Neo-Nazis in the '80s and members slept in the space nightly to protect it. There was also an attempted arson in the '80s, when someone dumped gasoline through the mail slot and tossed a lit match in to start a fire. Luckily, there people in the back room of the bookstore at the time and the fire was quickly extinguished. Unfortunately, the suspect(s) were never arrested. 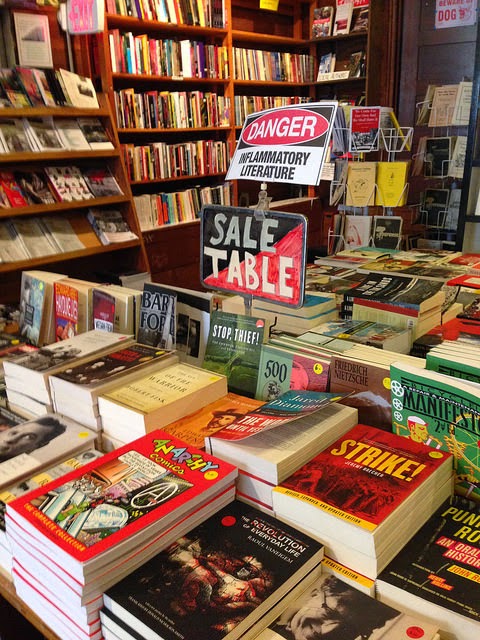 Bound Together was integral in starting the Bay Area Anarchist Book Fair, and members of the collective also helped to start the Prisoners Literature Project, which provides prisoners with books that they can't get through other means (prisoners are often prohibited from receiving books from citizens and can only receive them from bookstores or publishers). The store stocks some shelves with donated books that are priced to sell at $1 to $3 to cover postage costs for the benefit of the project. Some of the donated books are mailed to prisons as well.

Today, the bookstore has expanded its scope to include posters, t-shirts, pins, zines, used books, and sections on everything from animal rights to newer, popular fiction by the likes of David Foster Wallace and Haruki Murakami. Popular areas include the sales table, books by Howard Zinn, the Cunt Coloring Book, and the sections on beat literature, drugs, history, and politics.

As for an introduction to anarchy books, Cain recommends Anarchism by Daniel Guérin, which provides a historical overview; Anarchy in Action by Colin Ward, and Alexander Berkman’s What is Anarchism? 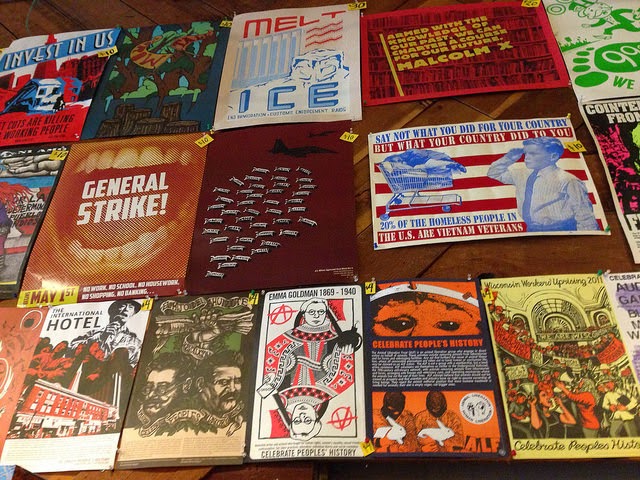 There are currently 12 active volunteers, but Bound Together is always welcoming new members to keep the bookstore open with more hours and more activities. They ask for a basic understanding of anarchy and welcome interests in other areas to expand their book selection on other topics.

To volunteer at the bookstore, one must attend meetings on every second Wednesday of the month, and work eight training shifts, which run from 12 to 3:30pm and 3:30 to 7pm. As volunteers have left, activities such as a weekly movie night and visiting speakers have also been harder to maintain, and the collective is especially interested in finding people to become involved in starting those activities up again.

If you’re interested in volunteering, or would like to learn more about the bookstore, head over to 1369 Haight St. to get started.