Forge Land Company’s proposal to turn parking lots at 145 Leavenworth and 361 Turk streets into 238 units of “group housing” is being met by opposition from property owners and Tenderloin residents surrounding the potential construction sites.

The Planning Department gave the proposal for two eight-story buildings, containing 250-square-foot market-rate studios with private bathrooms and limited cooking facilities as well as ground floor retail space, a recommendation for approval with conditions earlier this month. The proposal — which no longer includes a plan to convert five SRO residential hotels into tourist hotels — was scheduled for a Planning Commission public hearing this Thursday, April 30th, but postponed to Thursday, June 4th, following the Tenderloin Neighborhood Development Corporation's request for a four-week continuance “on the grounds that the project sponsor has not yet engaged in significant community outreach with residents of the Tenderloin.”

In the request, TNDC states: “It has come to our attention that the developers are claiming to have met with TNDC and residents of Kelly Cullen Community 'numerous' times between May 2014 and February 2015; we are not aware of any of these meetings and encourage that you ask the developer to provide specific information regarding when and with whom they engaged in dialogue about this project.” 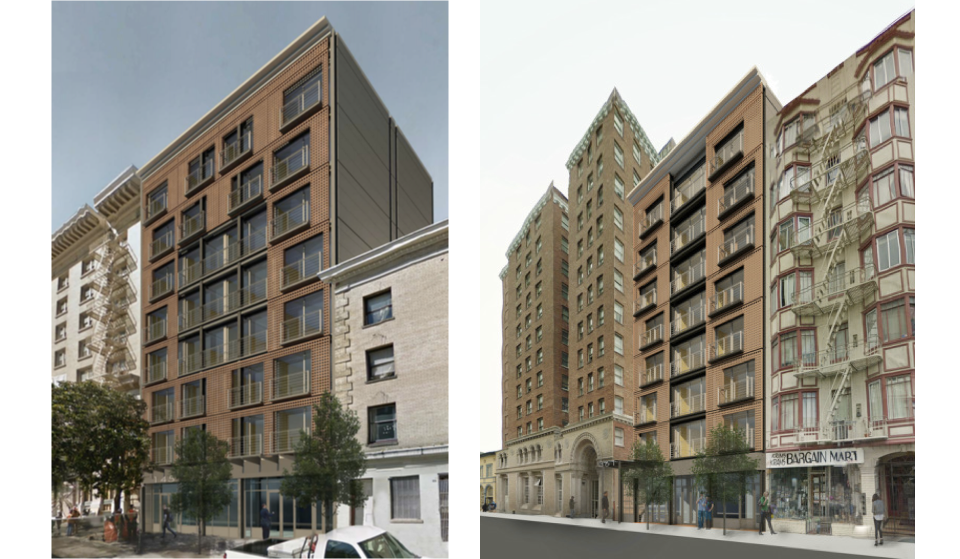 Renderings of the proposed buildings at 145 Leavenworth and 361 Turk via the architecture firm CollinsWoerman.

Donald Falk, CEO of the Tenderloin Neighborhood Development Corporation, hosted a community meeting yesterday evening at the Kelly Cullen Community Center to inform Tenderloin residents of the plan and, in turn, inform the organization’s position on the development. TNDC, which Falk said is not opposed to the developers building market-rate housing in the two sites, submitted its original position to Planning earlier this month along with seven proposed agreements for the development. Those agreements include:

Roughly 60 Tenderloin residents — many living in the Kelly Cullen Community at 22 Golden Gate, Curry Senior Center at 331 Turk and The Oasis at 351 Turk, which surround the development sites, and employees of neighborhood nonprofits such as Hospitality House, Faithful Fools and the Central City SRO Collaborative, attended the meeting to share their thoughts on the proposal. The majority of the issues residents raised echoed TNDC’s concerns.

Dave Knego, executive director of Curry Senior Center, and a resident in the building expressed frustration regarding the proposed distance between the new development and the senior center. Both Knego and the resident at last night’s meeting said the current plan would require boarding up a number of residents’ bathroom windows. According to letters submitted to Planning by lawyers representing 351 Turk owner Martin Gaehwiler and the developers, the two parties have been in a battle over the distance between the buildings for more than two years.

Gaehwiler claims that one of the developers, Chris Rosas of DKR Partners, agreed to a 17-foot setback during conversations in the spring of 2013, but the plans submitted to Planning in March 2014 include a stair tower and communal living space “that would require boarding up of our residents’ windows”. 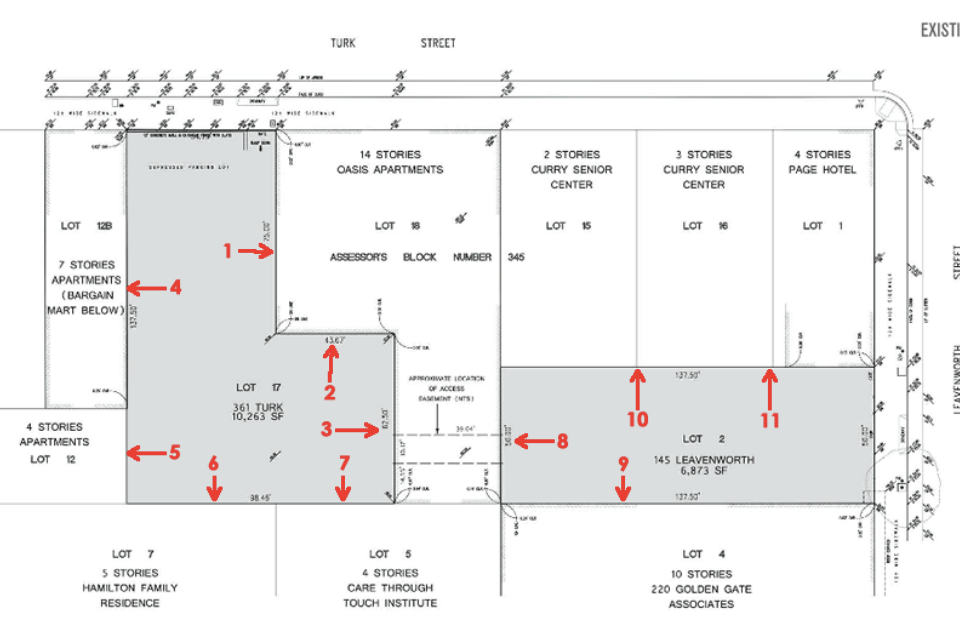 A diagram submitted to Planning illustrating proposed setbacks between 145 Leavenworth and 361 Turk and neighboring buildings via CollinsWoerman. 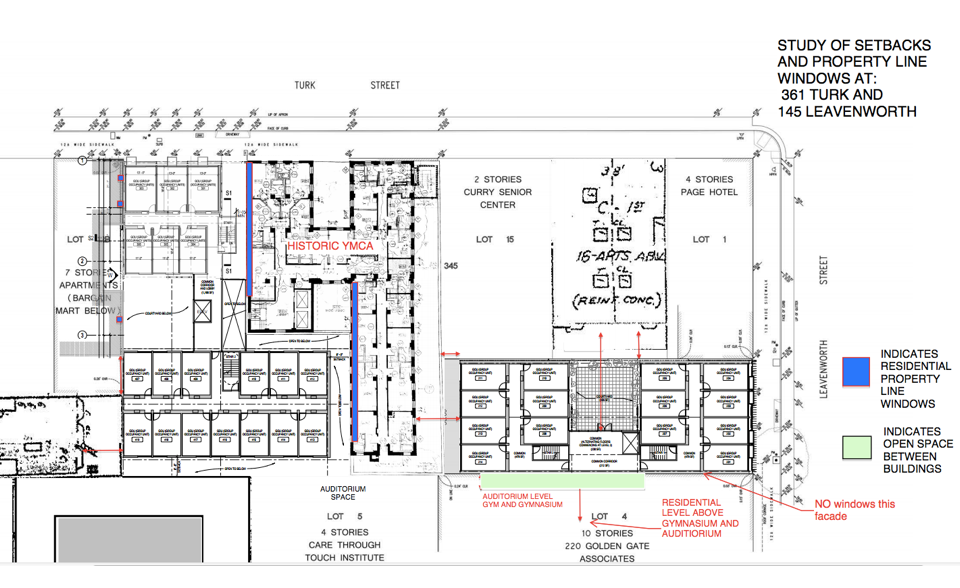 A diagram submitted to Planning illustrating property lines and open space between 145 Leavenworth and 361 Turk and neighboring buildings via CollinsWoerman.

In March of this year, a lawyer representing the developers submitted a letter to Planning rebutting claims of a deal to include a 17-foot setback and affect . The letter also stated that “the new development requires Mr. Gaehwiler to make significant changes in his building to bring it into code compliance”, highlighting Gaehwiler’s use of the empty parking lot — which was previously owned by the YMCA — for 351 Turk’s operations, including parking extra vehicles and operating waste management services “to provide exhaust for his ventilation system.” The developers’ representation argued that “… Mr. Gaehwiler has determined that his best strategy is to oppose the project and hope nothing gets built so he will not have to address building code problems for his building.”

Other concerns presented at the meeting included increased congestion in the area, displacement of low-income residents and safety concerns as a result of the 238 new units. Despite the proposal’s statements that the units will be “affordable by nature” due to the size and location of the development, one Kelly Cullen resident at the meeting asked the group, “Is this something we want in the Tenderloin? ... We know who this is for — young techies who eat breakfast, lunch and dinner at work and just need a place to sleep at night.”

Another Tenderloin resident also demanded that an independent engineer review the plans to ensure the modular, pre-fab buildings could withstand earthquakes. Her fear, she said, was that the project would quickly be deemed a success in the Tenderloin and “trailer parks on stilts” would appear all over the city, especially Hunters Point.

In response, Falk stated that the developers approached TNDC about two years ago regarding using their technology to make building TNDC’s proposed family housing development at 168 Eddy quicker and less expensive, but he “was not willing to be that innovative” as he wasn’t sure if the building would last 50 years.

According to Planning Department's assessment, however, "The Project would be constructed to meet all of the most current and rigorous seismic and life-safety requirements of the San Francisco Building Code."

TNDC did not invite the developers to last night’s community meeting but encouraged residents to attend the Tenderloin Futures Collaborative meeting at 11am on May 20th, during which the developers will present the proposal and field questions and concerns.

TNDC plans to host another community meeting on May 25 ahead of the June 4th public hearing, and encouraged community members to follow and support Supervisor John Avalos’ proposed amendment to the Inclusionary Housing ordinance, which the San Francisco Business Times covered in depth last week.