Traffic congestion and proposed new bus lines serving SoMa were the two hot topics Monday night at the regular monthly meeting of the South Beach Rincon Mission Bay Neighborhood Association (SBRMBNA). (Because both issues are of keen interest to neighbors, this will be a two-part story: tune in tomorrow for the rest.)

A couple dozen residents gathered at the South Beach Harbor Services Building community room from 6–7pm Monday to hear speakers from SFMTA and SFPD talk about two of the biggest concerns in the neighborhood: The lack of east-west bus transit east of Second Street and serving the Mission Bay neighborhood, and the persistent snarls of car traffic, particularly in evening rush hour as the city's drivers head for the highways and the Bay Bridge.

First up was Julie Kirschbaum, operations planning manager and scheduling manager for SFMTA's Transit Division. She provided a handout showing three proposed new or altered bus lines to help serve SoMa better: The 10-Townsend, the proposed 11 and the 12-Folsom/Pacific routes. Kirschbaum said the changes are based on a 2008 Transit Effectiveness Project, but Muni got feedback that it didn't meet the needs of Rincon Hill. So another study and survey was done on Rincon Hill "projecting where people come and go and where people will want to come and go in the future," she said. 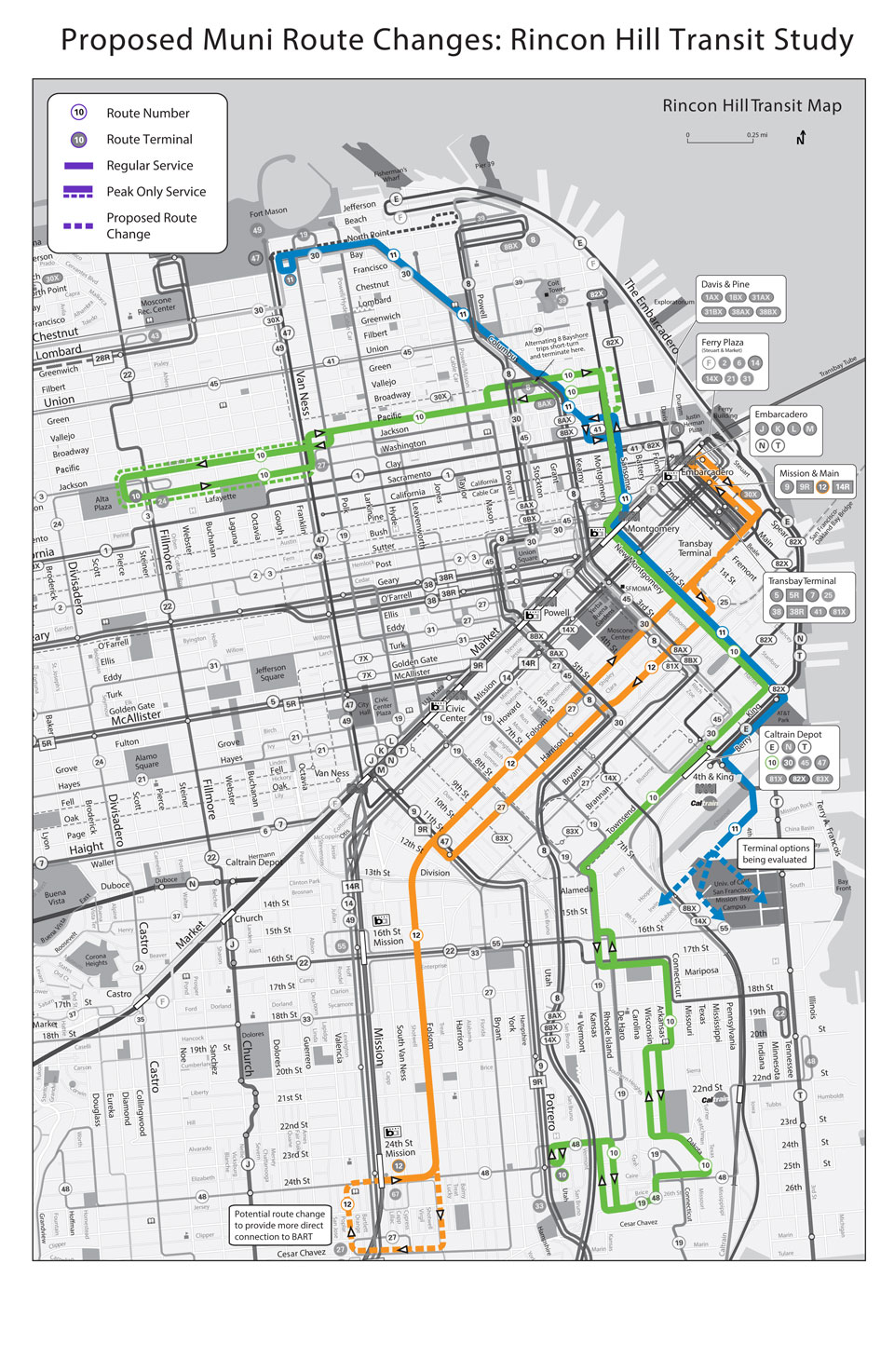 This was the third time SFMTA has met with SBRMBNA to discuss their findings, get input, talk about timelines and next steps, and ultimately take everything to the SFMTA board for approval. Whatever changes are made would be slated for rollout probably in early 2017, Kirschbaum said. The frequency of the 10-Townsend will be increased in spring of 2016. "We’re already seeing growth and crowding on that route now in the mornings and the afternoons," Kirschbaum said. It now arrives every 20 minutes; plans are to increase service to every 15 minutes and eventually every 10 minutes.

Muni is in the process now of increasing its overall service about 10 percent, and it’s the first time it's increased the service in almost a decade, Kirschbaum said. But when looking at adding service, it's important to design the route to be attractive, convenient and direct, or it won't be successful and will be vulnerable to future service reductions, she added.

Extensive construction on Folsom Street east of Second Street in SoMa will make sidewalks wider and improve bike safety, but it's not recommended to add a route and try to get a big push for ridership while construction is underway because stops can change and become difficult to find, she said. Kirschbaum asked everyone to send their feedback after seeing the map. "What I’m hoping to hear from you tonight is will this make it easier for you to get around? Does this serve your original concerns? Are there any outstanding concerns?" 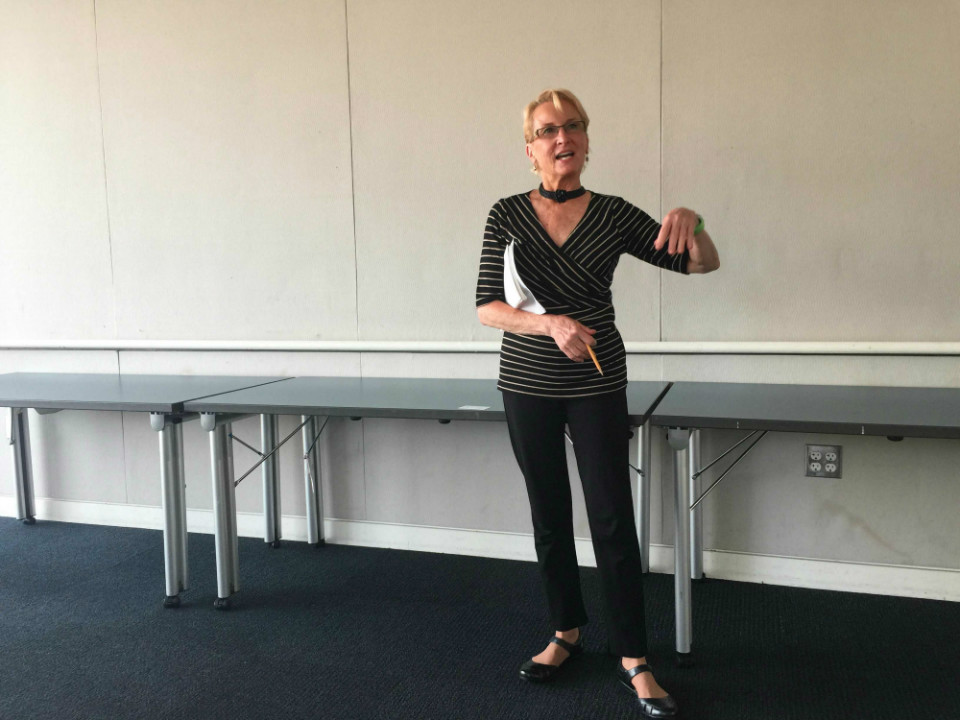 At the meeting, an attendee said it would be nice to have a direct line to North Beach. Mission Bay resident Corinne Woods said, "I really want to advocate for the number 11 bus. Connecting Mission Bay south to Potrero is important to this new Mission Bay neighborhood." SMRMBNA member Katy Liddell said, "I'm happy because I got my 12 back." Kirschbaum confirmed that staff will recommend the 12 extension to the board.

In a follow-up call the morning after the meeting, Liddell said, "The one thing we’ve complained about is the lack of bus service east of Second Street." Currently, there is no east-west bus service east of Second Street, so neighbors in eastern SoMa have to walk to Second Street. The proposal to extend the 12 to Main and Spear streets would give Rincon residents the ability to take the bus all the way to 24th Street, including past the shopping district near Ninth and 10th streets with Costco, Bed, Bath and Beyond, and other popular stores. "We're sorry it won’t be implemented until 2017, but we understand because Folsom is going to have so much construction going on, it probably doesn’t make sense to do it until then," Liddell added.

Woods added in a follow-up call that Mission Bay has four new apartment buildings and a new condo building opening this year, so "getting that supplemental service through Mission Bay south is really important. That would be hopefully with the 11, which would be pretty cool because that would take us all the way down to the Wharf."

Speaking of the Wharf, she said neighbors are excited about the new E-line historic streetcar service between Fisherman's Wharf and the Caltrain Station at Fourth and King starting on weekends on August 1st (it's been pushed back from July 25th, as previously reported). Some neighbors will volunteer to help riders navigate the new system when it starts, because boarding will be on a lower level of the existing Muni light rail platforms.

If you have comments on the bus line proposals, please email SBRMBNA at sbrmbna [at] gmail [dot] com, and the group will compile the feedback and forward it to SFMTA.

Next up, Camron Samii, enforcement manager, and Monica Georgopolous, supervisor for MTA's enforcement division, addressed concerns about congestion and gridlock in SoMa. We'll have more on this issue in Hoodline's SoMa neighborhood coverage tomorrow.