Last week, Muni's Board of Directors approved the 28 19th Avenue Rapid Project, which calls for multiple capital improvements that will boost pedestrian safety and shorten travel times along the 28/28R bus line by 20 percent. The project is part of Muni Forward, a system-wide initiative created to improve transportation infrastructure for "core routes serving nearly 70 percent of all riders."

The project approved last week will create 49 pedestrian bulb-outs along 19th Avenue, as well as 21 "transit bulbs" for passenger boarding and disembarking. As part of the work, SFMTA plans to consolidate several stops and expand service for the 28R-19th Avenue Rapid next year. After the project's design phase is completed next summer, construction work will roll out through 2018, culminating in a street repaving that summer.

Here's a visual summary of the proposed changes along 19th Avenue: 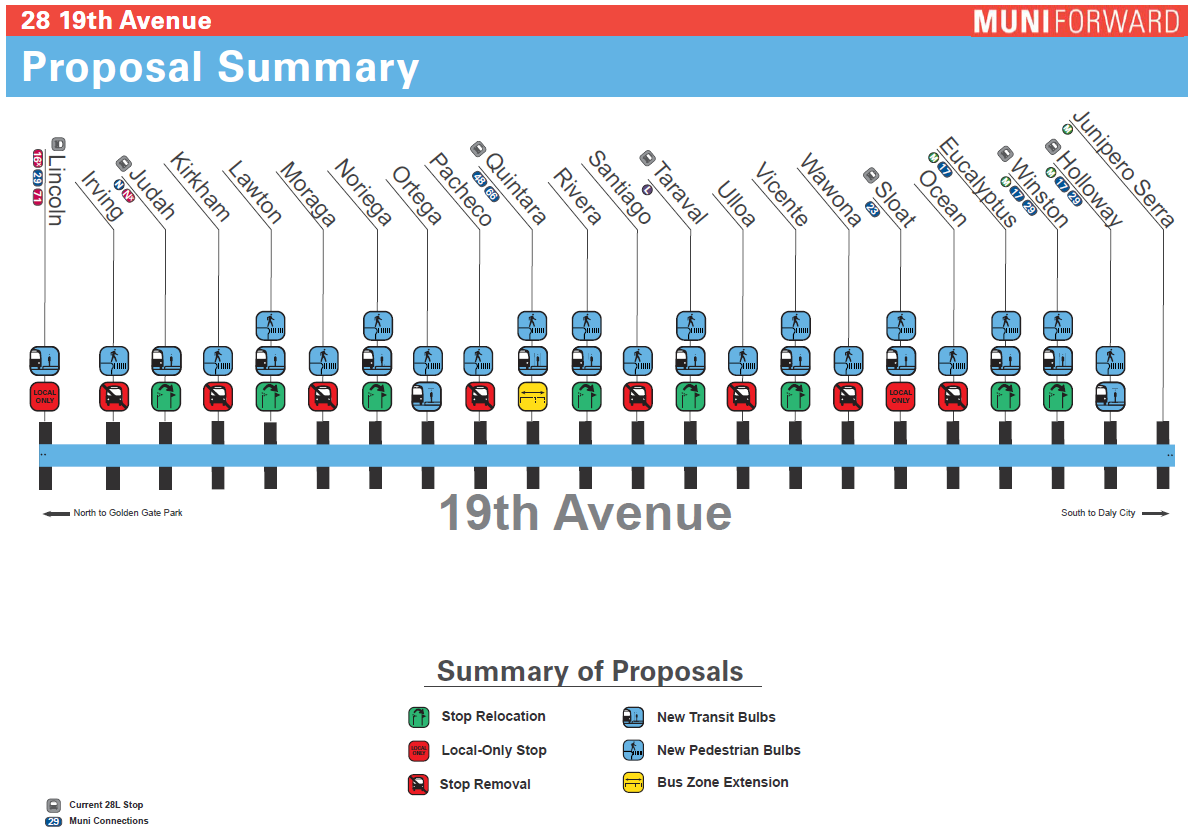 "Relocating transit stops to opposite corners allows buses to take advantage of signal priority technology that extends the green light for transit," states the project details page, and "removing stops along the route means buses are stopping fewer times."

The 28R-19th Avenue Rapid bus currently provides weekday morning and evening limited stop service between Daly City BART and Fort Mason. Under the new plan, the 28R service will be expanded to run all day, with the aim to provide "a less crowded and more reliable ride."

Muni held an Engineering Public meeting in April to solicit community feedback about the proposed transit changes along 19th Avenue. To accommodate the new bulb-outs and transit improvements, tow-away zones will be created along the 19th Avenue corridor between Lincoln Way and Holloway Avenue, eliminating some parking spaces on Irving, Judah and other adjacent streets . To date, SFMTA has yet to schedule another public hearing, but public hearings will likely occur once the project is in the design review phase.

According to SFMTA, the 28 and 28R bus lines that run along the 19th Avenue corridor are "one of Muni's busiest," carrying approximately 15,000 riders each day. Other Muni Forward projects in the Inner Sunset include the N-Judah Rapid Project and the Inner Sunset TEP Streetscape Project. The ongoing Sunset Tunnel Trackway Improvement Project, which required rush-hour passengers to take shuttle buses to Church & Duboce this morning, is another Muni Forward project.

San FranciscoInner Sunset
About 3 hours ago