Last night's monthly community meeting at Park Station was scheduled for 60 minutes, but an overflow crowd of approximately 100 attendees kept the forum going for more than two-and-a-half hours. Emotions ran high during the meeting, which largely focused on quality of life issues in the Upper Haight.

Sanford kicked off the meeting by reviewing year-to-date traffic and crime statistics in Park District. This year, district officers responded to 390 stolen vehicle reports, 987 car break-ins, 78 robberies and 63 "hot prowl" burglaries where a perpetrator took items from an occupied residence.

"Many of these hot prowl burglaries are from people leaving their garage doors open," said Sanford. "Once they see the open garage and the valuables, they'll simply walk in, take the bike off the rack or take anything of value and leave with that item."

The recent increase in auto thefts and break-ins "continues to be an issue," said Sanford, who reminded residents and merchants to do their best to remove anything that might give a thief a reason to break in, including loose change or a charger cable. "It's just not a good idea to leave anything of value in your vehicle," he added.

Switching to traffic enforcement, Park Station officers issued 462 citations in September, including 123 tickets for running stop signs; no citations were issued to pedestrians or cyclists. 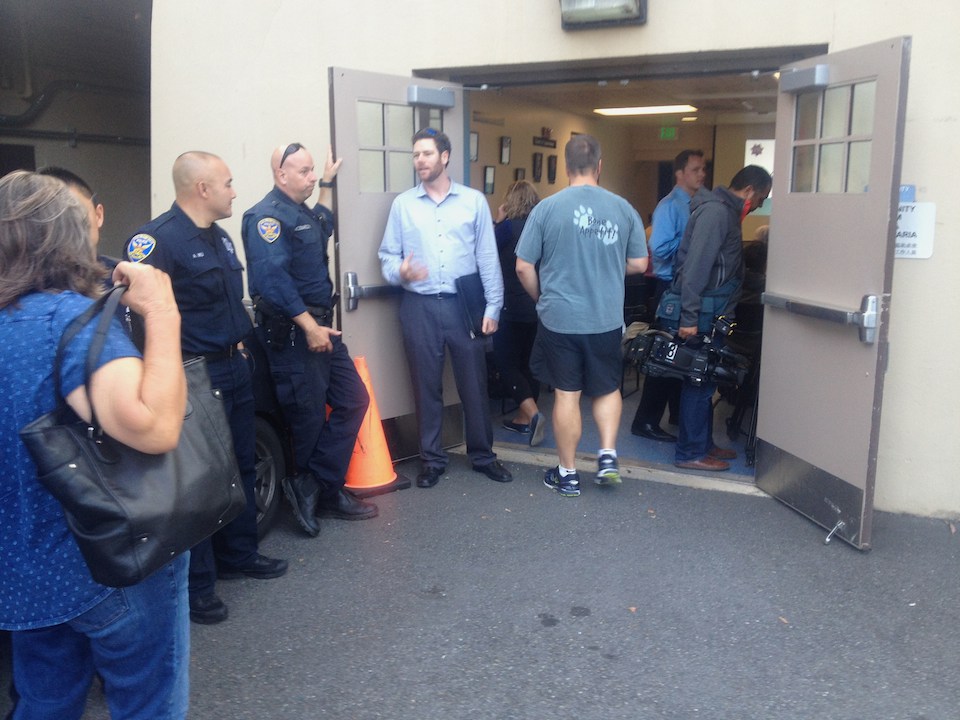 Several attendees who live near Buena Vista Park raised concerns about encampments created by homeless people in the park. Neighbors reported that camps are quickly reconstituted after SFPD's Homeless Outreach Team, park rangers and the Department of Health remove them. Sanford said district policy is to remove any reported encampments within 12 hours of receiving a call.

"Unfortunately, this happens to be a cycle," Sanford said. "This is why we do it constantly, week after week." He added that patrol officers check on sites of past encampments, but SFPD relies heavily on calls from residents to find out where new ones are located.

"It's a very serious and frustrating issue in the Park District," Sanford added. "When we take the encampments down, many times we will issue citations, the individuals go along their way ... and they set up their encampment in another location." He encouraged residents to continue calling the district's non-emergency line (415 553-0123) or email him directly at john [DOT] [email protected] to report camps or other illegal activity. "I need to hear from you."

Sanford turned the floor over to Breed, who said she receives email several times a day "from people who have tolerated a lot and are frustrated by what's happening in this neighborhood." Breed said she's recently spent time in the Upper Haight to visit problem areas, including a walk before last night's meeting.

"This is not just an issue around homelessness," said Breed. "This is an issue about quality of life and folks who are basically, blatantly publicly violating the law." Breed said she voted to secure funding to add 400 new officers to the force and will ask that some are assigned to Park District. "We need more foot patrols; we need more officers on the street."

She added that money has also been budgeted to add new neighborhood district attorneys and encouraged residents impacted by quality of life issues to contact SFPD so the DA's office can create stay-away orders. "I know that you have tolerated a lot over the years, and we have to be a lot more aggressive with crime in this neighborhood," said Breed.

"Foot patrol is very, very important," emphasized O'Sullivan, who said the district's new deployment plan assigns a pair of foot beat officers on Haight every day from 8am to 9pm. In the evenings, two more officers will join the overnight shift to respond to calls. O'Sullivan said more officers will be assigned to the district after new classes graduate from the Police Academy. Sanford added that a new sergeant has been tasked to Park Station's overnight shift to deal specifically with quality of life issues.

Several attendees who live hear Haight and Clayton said their block has a growing transient population that uses and sells drugs, camps on the street and urinates and defecates on the sidewalk. Each of them said they'd called police, but SFPD either failed to respond or told them that these activities were a low priority.

"Many times when we go out there, we have to warn these individuals first," said Sanford, who explained that officers typically write citations only for repeat violators of the city's sit-lie ordinance or for aggressive soliciting. "They get a citation, they leave for a few seconds, and unfortunately, they come back," he added. "We can't physically take them into custody or take them to jail."

A few at the meeting drew connections between the Upper Haight's transient population and the murders in Golden Gate Park and Marin County that were allegedly committed by Sean Angold, Lila Alligod and Morrison Lampley. "The majority of these people are not armed," countered Sanford, who said district officers rarely discover guns after a search. "I do not want this community to be up in arms or scared that all of these individuals out there are carrying guns. That's simply not the case," he said.

Due to the large number of people who attended the meeting, Breed said she'll work with Sanford to secure a larger venue for the monthly meeting, which was also overflowing at an August meeting to discuss the station's traffic enforcement for cyclists. Next month's meeting is scheduled for Tuesday, November 10th at 6pm at Park Station (1899 Waller St.).