Holding up paper plates saying “Leash NPS” and “NOT FAIR,” supporters of off-leash dogs both silently and vocally protested the proposal, which would see off-leash dogs restricted from much of Ocean Beach, Crissy Field, Baker Beach, and Fort Funston in San Francisco.

Held at the SF County Fair Building in Golden Gate Park, the meeting was the second of two community meetings in San Francisco on the proposed rule. As Lehnertz walked the audience through the proposed dog management rule, she was regularly heckled, booed, hissed, and interrupted by spirited protesters during the meeting, who want to continue the existing dog management system that allows off-leash dogs access throughout the GGNRA.

The proposed rule would apply to the GGNRA, the only one of the 410 national parks under the aegis of the National Park Service (NPS) to allow dogs on its lands. Established in 1972, the GGNRA initially had 1.6 million visitors a year. As San Francisco and the Bay Area experienced population growth and increased tourism, the GGNRA now sees nearly 18 million yearly visitors. 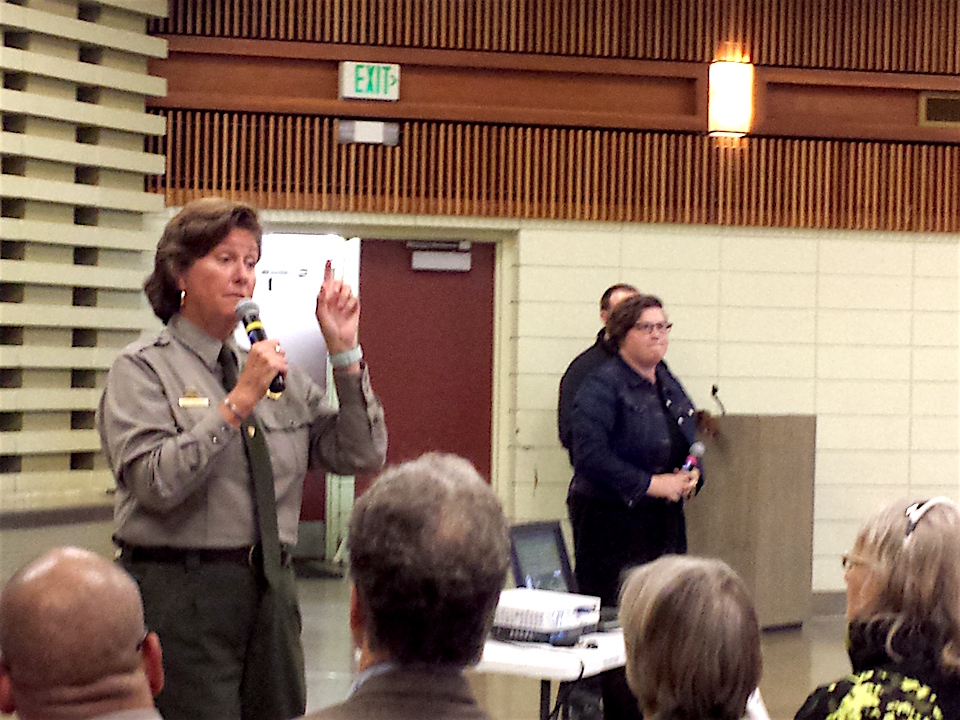 Sup. Chris Lehnertz of the GGNRA speaks to the audience.

Even as visitors to the GGNRA have grown, conservation remains a mandate, said Lehnertz. “We’re trying to create a plan for the future,” she said of the plan, which she called a consensus solution. “We know that the population of the Bay Area could increase by 40 percent over the next 25 years.”

Safety is also a concern for the GGNRA. “From 2008-2011, there were 95 reported dog bites,” said Lehnertz in response to a question asking for clarification on the cited number of 400 dog incidents. She believes that dog bites are underreported.

The plan would allow for 17 miles of on-leash dog-walking in nine park locations, including 34 percent of beach mileage. Voice and sight control would also be acceptable in specific parts of the GGNRA.

However, the proposed rule faces strong opposition from dog lovers in San Francisco, a city that is famously said to have more dogs than children (in 2007, there were approximately 120,000 dogs and between 108,000-113,000 children). Not only have groups such as Save Our Recreation and Save Off-Leash formed to oppose the GGNRA’s dog management proposal, San Francisco’s Board of Supervisors have come out against the proposed rule, voting 12-1. 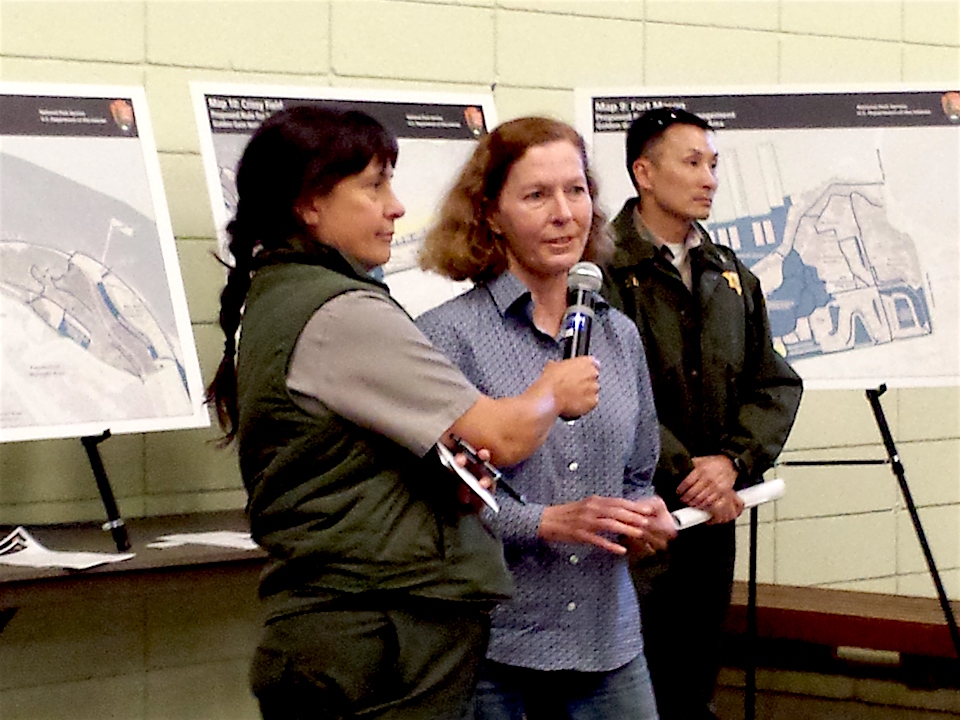 A resident speaks out against the proposed dog management rule.

Both supporters and those against the proposal spoke out during public comment.

“This is crazy. We’ve never had any problems with dogs out there,” said one dog owner, who said that he was a former city gardener. “This is the second most crowded city in America after New York City. I’ve had far more problems with people than dogs in San Francisco.”

Professional dog walkers also expressed their concerns. Under the new dog management rule, no more than six dogs per person would be allowed in the GGNRA, and walking 4-6 dogs would require a permit.

“I really have serious reservations about how your staff in the field are going to set the criteria for [professional dog walkers],” said one woman, who said she was a graduate of the academy of dog trainers at the San Francisco SPCA. “I’m afraid that whoever is going to be enforcing these rules is going to be subjective. Who do you plan to have on your staff who can speak to dog science and dog behavior so that we’re not going to be harassed?”

Others were in support of the proposed rule. “I enjoy the experience without dogs. Most of the people have good dogs, and that’s fine. But I go there [to Crissy Field] to see the wildlife and every so-and-so, I see dogs chasing birds,” said Louis Blumberg, an Inner Sunset resident who lives near Sutro Forest and frequently visits Crissy Field.  “I want to commend you, I think that you’ve done a good job.”

“The GGNRA provides more recreational properties than any other in the national park system, and I’m thankful that the GGNRA gives visitors an opportunity to not have a dog experience," said Neal Desai, a Sunset resident and frequent GGNRA visitor. “What I don’t get though is this whole idea of voice control. I just don’t think the public has confidence that the Park Service or the City of San Francisco can control dogs, and that’s putting the public at risk.”

Enforcement of the proposed rule remains a concern, especially as current enforcement is mostly non-existent. By their own count, the NPS sees 60-70 percent non-compliance in areas that are already restricted from dogs, such as the Snowy Plover Protection Area on Ocean Beach.

“We’re going to make sure there is a good strong education period here,” said Lehnertz. “We’re most effective when we are fully engaged with the community instead of strict enforcement.”

After the public comment portion, some dog supporters were frustrated by the meeting. “Our voices as citizens are being ignored,” said Golden Gates Heights resident Nancy Zimmerman, who would like the National Park Service and the GGNRA to enforce the current laws. “I let my dog run off-leash sometimes on Ocean Beach, but I also see people letting their kids run up and down and chase birds. I see people leaving their cigarette butts, leaving their garbage, and don’t pick it up. Why pick on dogs?”

The National Park Service and the GGNRA will make a final decision in December 2016, ending a process that first began back in 2002. To comment, head over to regulations.gov; the deadline is May 25th, 2016.