By Andrew Dudley - Published on July 09, 2012.
San FranciscoLower Haight
The Vapor Room Cooperative, which has been in business at 607A Haight Street since 2004, will be closing at the end of July -- the latest victim of a federal crackdown on medical marijuana dispensaries.

"After more than 8 years of service to our community in the Lower Haight, we are being forced to close our doors by U.S. Attorney Melinda Haag. Our last day of operations will be July 31st, 2012. We've done our best to be a valuable neighborhood asset and have cherished the community bonds we've shared with so many wonderful Lower Haight folks."

Olive says that the Department of Justice has cited the Vapor Room's proximity to the playground at the far end of Duboce Park as being the reason for its non-compliance. However, there is no mention of playgrounds in city or state medical marijuana laws. Rather, here's what the laws say: Our unofficial calculations using Google Earth reveal that the Vapor Room lot is, as the crow flies, within 1,000 feet of both the northeast corner of Duboce Park and the Harvey Milk Center. (The 600-foot radius is more questionable.) 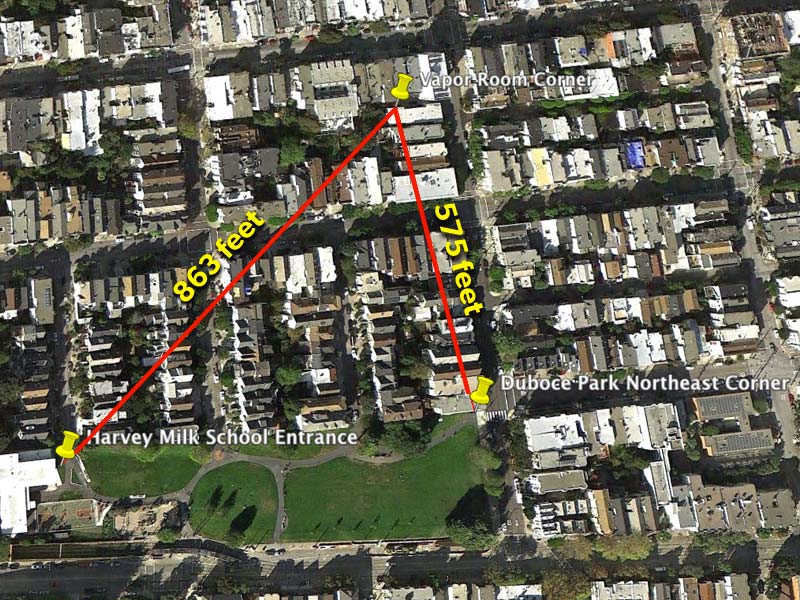 But the definition of "school" seems to be the contentious factor here. The Harvey Milk Center for the Recreational Arts in Duboce Park does not bill itself as a "school," although it does host photo and arts classes as well as a summer camp. It could perhaps be interpreted as a "community facility and/or a recreation center," but with its many classes geared towards adults, it's hard to say whether it "primarily serves persons under 18 years of age." Update 7/9/12: Olive reiterated to us this morning that the DOJ made no mention of the Harvey Milk Center in their letter to the Vapor Room's landlord, citing only the playground in Duboce Park as the reason for their targeting the Vapor Room. Olive contends that the D.O.J. has cited the Vapor Room's proximity to the Duboce Park playground as the reason it's being shut down. But a playground is not a school. As Olive notes:

"San Francisco MCD permit regulations do not include playgrounds and parks as sensitive uses in their permit application requirements. So, we have been compliant in the City's permitting process this whole time, as well as all State Laws. Not to mention the community and member services we provide and the positive example of compassion and ethics that we strive to uphold. That doesn't matter one iota to the US Attorney. The community loses a strong supporter, patients lose access to their medicine in a safe, responsible facility as well as our wellness services, employees lose jobs & benefits, the City, State and Federal government lose tax dollars..."

The Vapor Room has in fact been an active member of the Lower Haight community in the past decade. The Lower Haight Merchants and Neighbors Association recently wrote the US Attorney a letter in support of the Vapor Room, citing the shop's contributions to many local causes including the John Muir Elementary School, the Lower Haight Art Walks, and the creation of the giant mural at Haight and Laguna. The letter described the Vapor Room as:

"...a model and exemplary medical cannabis cooperative in San Francisco, maintaining a compassionate, ethical, compliant and permitted medical cannabis dispensary for over (8) years. We urge you to extend the time they can stay in their current location, and we would support them moving to another location in our neighborhood."

Unfortunately, that won't be happening. Olive tells us that, because the federal government appears to be cracking down on dispensaries within 1000 feet of parks and playgrounds (not just schools), "there is not one sliver of a viable space within District 5. Access to therapeutic cannabis will disappear in this District and the surrounding areas." Federal law does consider the possession and/or distribution of marijuana to be illegal in all cases. The odd thing here is that the U.S. Attorney seems to be cracking down on the Vapor Room -- and many other cannabis dispensaries throughout California -- under the guise of enforcing state and local laws. By all accounts though, the Vapor Room has been compliant with those laws, and no state or local authorities have contended otherwise, to our knowledge. Last week we reached out to both U.S. Attorney Melinda Haag and her spokesperson for comment. As of this morning, neither has responded. If they do, we'll update accordingly.
San FranciscoLower Haight
Jun 24, 2022