Buena Vista Park was officially designated by the San Francisco Board of Supervisors on May 8, 1894. Although many significant and interesting stories surround the park's history, our story focuses on the park's gutters, and begins in 1914. That's the year that San Francisco's Board of Supervisors sent removal notices to all of the city cemeteries. Along with public health concerns, there was a common complaint that the cemeteries were an inefficient (and unsightly) use of land, which was becoming a more valuable commodity as the city's population swelled. Thus, the Board of Supervisors branded the cemeteries a menace, a nuisance, and a detriment to the health and welfare of the city. There was some resistance, but by 1937 the voters of the city prevailed, and the cemeteries were ordered removed. At that time, Lone Mountain was home to the "Big Four" cemeteries. 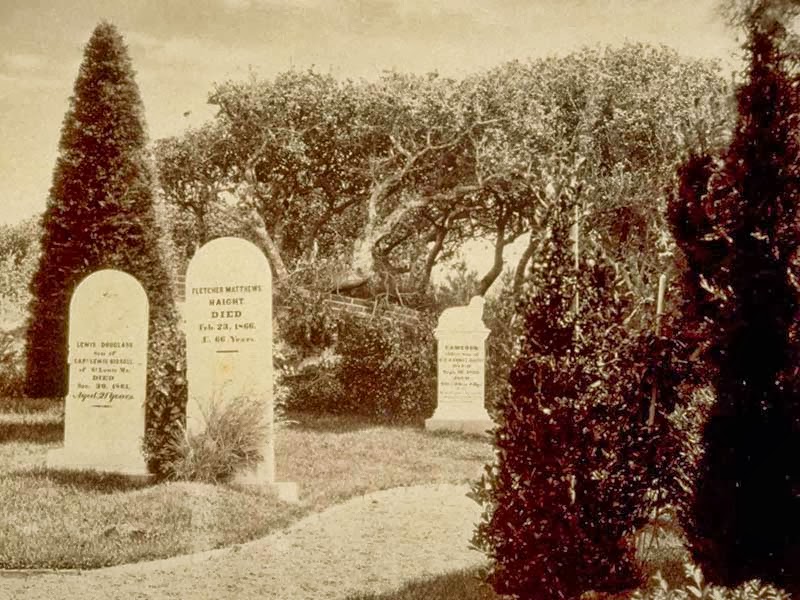 Laurel Hill Cemetery, featuring the grave of the brother of Henry Haight, for whom Haight Street was named. Courtesy of UC Berkeley, Bancroft Library.
The first, Laurel Hill Cemetery, was the resting place for politicos, doctors, and judges. A few of the famous dwellers included US Senator David Broderick (an abolitionist), Dr. Hugh H. Toland (the founding father of the University of California San Francisco), and Judge Silas W. Sanderson (Justice of the California Supreme Court). The second cemetery was the Calvary, founded in 1860. This Catholic cemetery was home to the Catholic Irish San Franciscans, but as their graves were mainly marked by white wooden crosses, they do not play a role in our story. The third, Masonic cemetery, was home to those who were members of the California Masonic organization who had passed away. The last “Big Four” cemetery was the Independent Order of Odd Fellows cemetery, founded in 1865. The Odd Fellows -- who believed that friendship, love and truth should guide people to make a difference in the lives of others -- were buried here. But due to the San Francisco Board of Supervisors and voters, this would not be the final resting places for these people. The US itself was in the midst of the Great Depression in the 1930s. With the inauguration of president Franklin D. Roosevelt came the New Deal, and with the New Deal came the Works Progress Administration (the WPA). The WPA was a work-relief program which employed more than 8.5 million people, and was responsible for improving and building public works including bridges, roads, public buildings and parks. One of those parks was our very own Buena Vista Park. By the end of the 1930s, the cemeteries of San Francisco were dug up, with the remains of those resting in their graves moved to Colma. The cemeteries would attempt to contact the relatives of the deceased prior to their removal. If relatives were still in the Bay Area and claimed their loved ones, the remains and tombstones could be removed privately and buried at the families' discretion. Those corpses not claimed by relatives were buried in a mass grave site in the new cemeteries at Colma. But what about the tombstones? If unclaimed by relatives, they became property of the city. With limited funds and resources, the city decided to use the tombstones to rebuild public spaces. Buena Vista Park was one of these places. 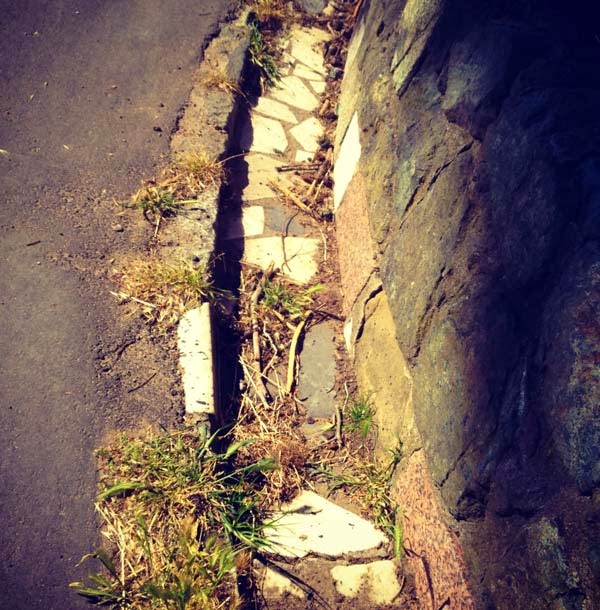 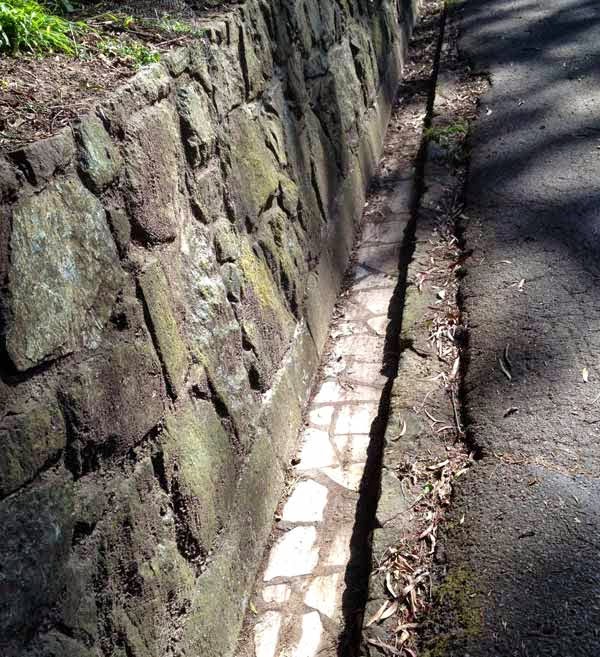 In Buena Vista Park, the WPA was hard at work repairing and constructing the retaining walls and gutters. When the tombstones came in, they were broken up and used as materials. Out of respect for the departed, the workers were instructed to lay the tombstones with the writing face down. But as mistakes are inevitable, some of the marble pieces were laid with the engravings face up. Although time has worn the markings down, some are still visible today. 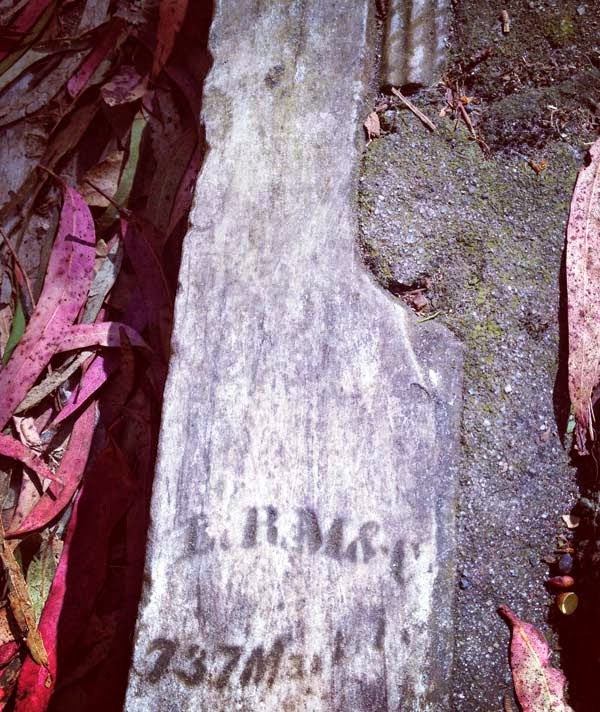 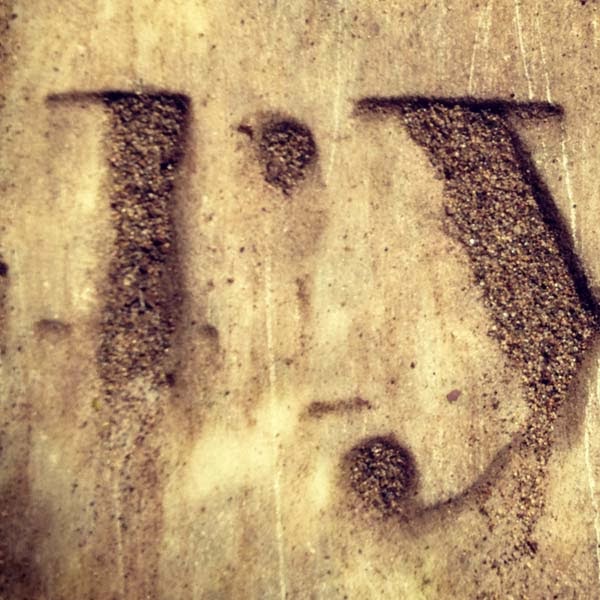 And that is the story of how the San Francisco cemeteries have contributed to our local Buena Vista Park. Maybe you've been to Buena Vista Park and walked by the tombstones, not even noticing they were there? Now that you know, think about those who were buried at Laurel Hill, the Masons who contributed to the community and the Odd Fellows who have come before you. Will you ponder about the philanthropic efforts that these men and women brought to the city? If you would like to find them the quick and easy way, a step-by-step guide is below, but if you like a good scavenger hunt, maybe on the next sunny weekend you'll take a trip to the park and try to find them yourself. Instructions to the tombstones: From the entrance at Lyon and Haight walk up the stairs and veer off to the right. Take a left on the main path until you are above the playground. Turn right up the hill and at the next major crossing take another right. Up and down this path are the marble tombstones from the "Big Four" cemeteries used by the WPA to rebuild our park.
San FranciscoUpper Haight
About 9 hours ago