The Story Behind New Star-ell

Photos: Stephen Jackson/Hoodline
By Stephen Jackson - Published on March 17, 2014.
San FranciscoDivisadero
Although you may be familiar with the enigmatically named liquor store on the corner of Fell and Divisadero, there’s a chance you might not be hip to the true gem of New Star-ell Liquor: their boundless selection of craft beers.

We felt it necessary to spread this bit of info, and wanted learn a little more about the shop itself, so we stopped by and talked to part-owner Sameer Nasser.

First of all, we learned that “New Star-ell” got its name because it’s the last name of the original owner, who was in charge of the corner store in the 40’s or 50’s. The infamous hyphen in its title is nothing more than a coincidence, or may have been added to fit the name to the shape of the sign (the guy’s name was simply “Mr. Starell”). It’s said that back in those days the shop had big barrels of whiskey and beer in the back and people could walk in and fill a glass to their liking.

A man named Willie Rain owned the place until early 1985, when another owner named Joe Totan took over. Sameer came to work for him in March of that year and then bought the business with his brother, Salim, in October ’85. These two, along with their brother Kaled, also own Ziryab , which opened nearly 20 years later in 2006. Essentially, these guys have been holding down that corner for a really long time. 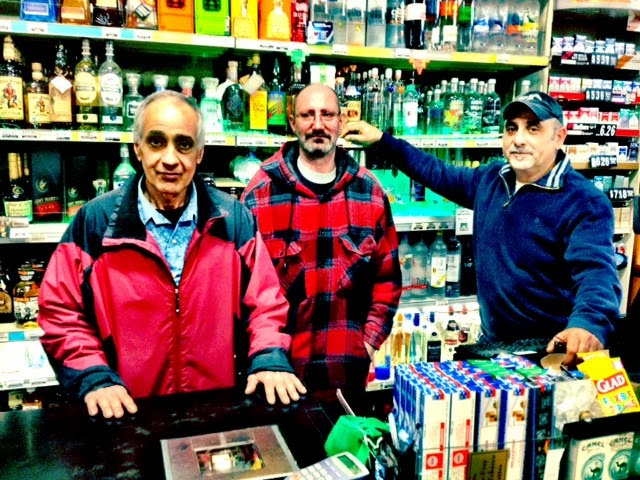 That’s Sameer on the right. To his right is his cousin Sam, who's a born-and-bred San Francisco local and has been working at the store for 8 years. Despite his hard exterior, he cracked a smile when we asked him about his tenure on the block. "Ninety-seven of people are hella cool. Some sloppy people you can’t talk sense into. Otherwise, I love this neighborhood. I wouldn’t want to work anyplace else.” Finally, to the far left is Ahmad. He came over from Lebanon in 1978 and has been working at the shop four days a week since 2005.

That’s it for the meet and greet; let’s get to the beer. We were pleasantly astonished to learn that New Star-Ell houses nine coolers entirely devoted to craft beer, as well as five and a half coolers designated to six packs. On top of that they have a room temperature 8-foot storage shelf (for beer you want to cool later).

It’s safe to say that this is far and away the most extensive and at times esoteric selection of beer on Divisadero. According to Sameer, they began amassing the good stuff after a remodel in 1999, and started out by just carrying Chimay. From there, they kept expanding until they are where they’re at today. Of course, they also carry many wines and liquors, but it’s clearly the beer selection that’s most remarkable about this place.

So there you go. History, opportunity and a killer beer selection—all right under your nose on Fell and Divisadero.
San FranciscoDivisadero
Jun 24, 2022