Photo: Andrew Dudley / Hoodline
By Andrew Dudley - Published on May 01, 2014.
San FranciscoLower Haight
Sure it's been hot the past three days, but do you know just how hot?
This little guy does. 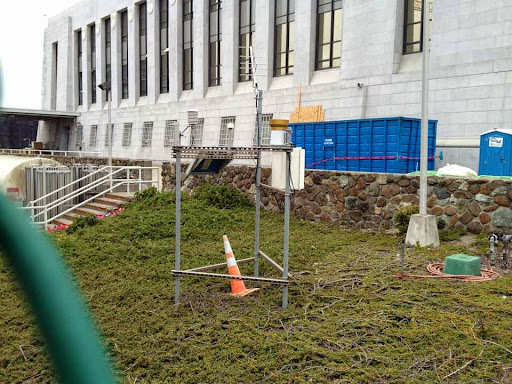 It's a National Weather Service observation station, holding it down at the corner of Hermann and Buchanan, on the edge of the U.S. Mint property.
Codenamed SFOC1, the station reports temperature, dew point, humidity, and precipitation every hour at 43 minutes past the hour, oddly.   Yesterday's observed high at SFOC1 was a balmy 88 degrees, reported at 3:43pm. That's 5 degrees short of the record, and 24 degrees above the norm.
There are several other citizen-maintained observation stations around town, but SFOC1 is the only one officially maintained by the NWS.  It's been in service since 2007, after being relocated from the roof of the Harvey Milk Recreation Center in Duboce Park.  The station has been moved 14 times for various reasons over the past 149 years.  Its current location is the first at ground level.
As a 2007 McClatchy article noted at the time of the relocation:

"The equipment couldn't be plunked down just anywhere. It couldn't be set on top of a skyscraper, or anywhere near the foggy Sunset and Richmond districts. An asphalt parking lot would be too hot. A park would be great -- but only if they could find one where the equipment wouldn't be vandalized or stolen."

So after literally driving around the area looking for potential locations, they settled on the Mint site.  It's on a grassy patch (not too hot), on a heavily protected federal property (unlikely to be stolen), and near its former Duboce Park location (so the new measurements should be pretty similar to those of previous years).
Of course, given the city's many microclimates, a NWS spokesperson admitted in 2007, "There is no such thing as one spot that is going to be representative of a city like San Francisco."  But if you ask us, they picked a pretty good location.
Now that's what we call... secretly awesome!
San FranciscoLower Haight
About 21 hours ago