Photo: Sim Blakeney/Hoodline
By Sim Blakeney - Published on July 23, 2014.
San FranciscoHayes Valley
A Hayes Valley resident since 1986, Madeline Behrens-Brigham describes herself as an artist and neighborhood activist. But she has also been a store owner, party planner, caterer and chef. She once ran the household to the former ambassador to England in Winnetka, Illinois. And, at another time, she owned a cookie business with her sister.
One of the leaders of the campaign to get the freeway out of Hayes Valley, Madeline is also co-founder of the Hayes Valley Art Coalition (along with Russell Pritchard of Zonal), and a community board member for Legal Assistance to the Elderly.
Sitting down to chat with Madeline was a real treat. From her tales of the transformation of the neighborhood, to her collection of historical articles, clippings and photographs of Hayes Valley, to the eclectic and colorful artworks which fill her studio, it was a fascinating experience. 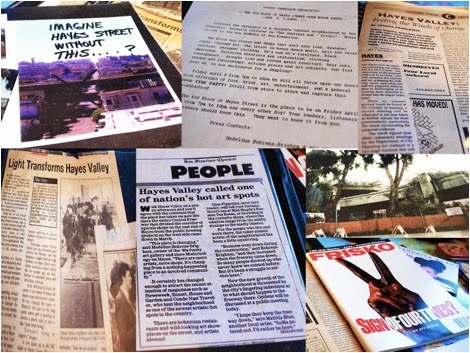 How did you come to Hayes Valley?
"I lived in a town of 275 people until I was 10 (Farmersville, Illinois), then I moved to a town of 900, and then to Champaign–Urbana. Champaign–Urbana was my introduction to the world. But when I moved to California at 19, that was the beginning of my life. Since then, I have pretty much lived in California.
"When I first moved to San Francisco, in 1977, I lived in the Western Addition. In 1986, I was managing an art deco store on Gough. I always liked to live close to where I work, so I moved to the area. I opened my own store on Hayes Street in 1990. It was called Modernology and I sold 40s and 50s furniture and art. I lived in the back of the store.
"I was one of the pioneer store owners on the 500 block (Hayes Street between Laguna and Octavia). We called ourselves the 'bad block.' But I closed my store after three years, in 1993. It was so time-consuming. There was a lot to do to organize the neighborhood and I realized I was not doing my own art.
"After I closed the store, I started working on my own art and working with design clients. At the same time, I was also working in the other stores on Hayes Street. In fact, I think I helped out in every store on the block, except one, at one time or another."
What was the neighborhood like back then?
"We were in the shadow of the freeway. The police would not come, pizzas would not be delivered, taxis wouldn’t drive into the area. In late 1991 and early 1992, the north section of the freeway came down. It lightened up Hayes Valley. But it was not called Hayes Valley when I moved here. It was part of the Western Addition and Lower Haight.
"When we started trying to promote ourselves as a collective, we called it Hayes Valley, after seeing the name on a real estate map. I mean, that was the name, but it had never been called that openly.
"At that time, there was just a handful of us working towards opening up the neighborhood and getting people here. People were so afraid to come here. Russell and I started throwing block parties to try and help people overcome their fear and get them to come into the area. Starting in 1991, we held block parties every two months or so. They have been ongoing ever since, but now we only have them about once a year."
How do you feel about all the changes?
"Change is not always easy, and it happens. There is a quote: 'change is the only constant in life.' I find it helpful to read and be reminded of that quote on and off.
"I think the changes are mostly for good, although it is hard to understand a lot of them. I would say that I find the current changes 'startling.'"
You describe yourself as an artist and neighborhood activist. What is your number one passion?
"I am an artist first, and have been since the first grade."
Can you tell me about the Hayes Valley Art Coalition (HVAC)?
"I co-founded the HVAC with Russell in 2007. The Arts Commission ran out of money that year, so Russell and I said we would finance art shows in Hayes Valley. We founded HVAC ourselves and started raising money through fundraising and local merchants. We have recently started collaborating with the Hayes Valley Neighborhood Association, Art, Culture and Entertainment committee."
You are also a community board member for Legal Assistance to the Elderly. What does that involve?
"Whenever the elderly need help with something, I assist. More often than not it is about leases. I am grateful to be of assistance to them since they saved my lease a few years ago. So when they asked me to be on their board, I accepted. I do fundraising for them and try and contribute however I can."
You have been involved in many neighborhood projects, events and activities over the years, what would you say were your favorites?
"I am not done yet! I am hoping to put together an art show featuring local artists very soon. I have also signed up for SF Open Studios this year, so am working on my own workroom/studio to prepare for that. For me, it is all about staying in the moment and doing what can be done."
What would you like to see happen in Hayes Valley?
"I would like to see more art. With so many new buildings going up, it would be nice for people to see and appreciate local art, and perhaps buy some for their new condos.
"I like that there are now more coffee shops and places for people to gather and talk to their neighbors. But, for the future, the past is important. Hopefully, we will keep some of the spirit here.
"In 1991, Frisko magazine did a feature entitled “Shopping along Hayes.” It quoted me as follows:

Madeline said: she came to the area because “Hayes Street had a real bohemian, community feeling:” a place where “neighbors bring flowers, home-baked breads, art, and pet birds to your door in the morning.”

"I still feel the same way."
What advice do you have for newcomers to the neighborhood?
"Get out and talk to your neighbors. It is possible to do a lot starting where you are. So many people think they need to save the world. That is hard. Your neighborhood is one block. A lot can be accomplished by starting on your block."
Finally, what are your favorite places in Hayes Valley?
"The bench in front of Russell’s store (Zonal). I have been sitting out there for years.  I really like Hayes and Kebab, which is leaving. Two Sisters bar is a good place to meet people. And I like sitting in Patricia’s Green. It is so wonderful."
Thank you to Madeline for sharing her experiences, scrapbooks and art with us. You will be able to see some of her work during SF Open Studios towards the end of the year. Do yourself a favor and check it out. And, if you see her around the neighborhood, go up and say hi. Trust us, she has some marvelous tales to tell.
San FranciscoHayes Valley
13 minutes ago