Addressing The Pink Elephant In The Room: The Pink Saturday Meeting Recap

Community member Bruce Beaudette shares his ideas on how to make Pink Saturday better (Photos: Roy McKenzie/Hoodline)
By Roy - Published on September 11, 2014.
San FranciscoCastro
Last night, the Eureka Valley Recreation Center was filled with community members from all walks of city life ready to talk about the pink elephant in the room. Namely, what will the future of Pink Saturday look like?
Castro residents, event organizers, DJ's, out-of-towners, politicians, police, and activists all showed up to make it clear that regardless of whether the Sisters of Perpetual Indulgence continue to host Pink Saturday or turn the event over to the city, it can only continue if event organizers beef up security, establish an earlier end time, and change the event programming. If you missed the meeting or need a refresher, read on for a full recap of what went down.
To be or not to be
Throughout the event, moderator Sister Saki Tumi reminded attendees to focus on how to keep the event alive, even as a few community members expressed their desire to see the event end. "The event has gotten so out of hand, I'm afraid to be in my own neighborhood," said Frank Pietro, a 15-year Castro resident. "The event shouldn't happen."  Other residents mentioned feeling unsafe and upset about the mess left behind from all the partiers.
But even though many attendees expressed their displeasure surrounding the event, most seemed to agree that Pink Saturday is important for the community and sending the event the way of Halloween was not acceptable.
If the community had only came together as group to help solve the problems of Halloween the same way it is now trying to solve the issues with Pink Saturday, SF Pride president Gary Virginia said that perhaps things could have turned out differently for the October event. Waiyde Palmer, who worked to organize some of the first Pink Saturday celebrations, said, "Canceling it is a disservice to the community." Palmer spoke of the initial Pink Saturday celebrations as being political and designed to celebrate the power of the GLBT community. 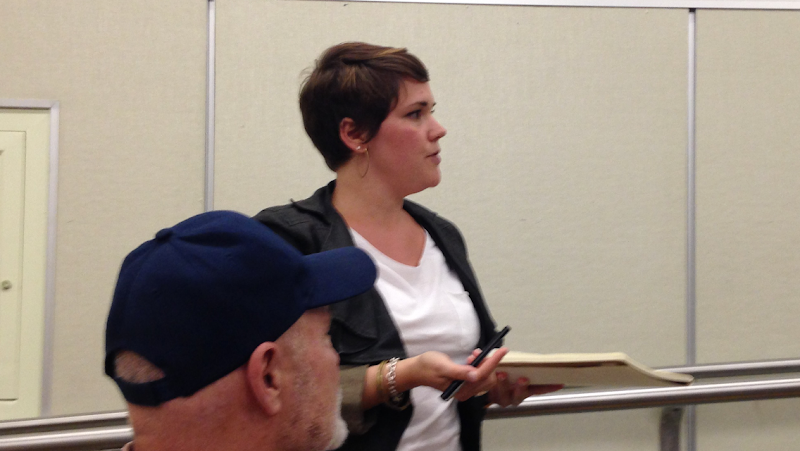 Dyke March organizer Elizabeth Lanyon discusses youth's role in Pink Saturday
Solutions
Many of the meeting attendees agreed that the event should end earlier, noting that the turning point at which the event goes from "magical to mess" (as Selma Soul put it) is around 8pm. Supervisor Scott Wiener and San Francisco Mission Station Police Chief Daniel Perea echoed the same sentiments.
Another complaint highlighted last night was that the event's programming is no longer centered around gay pride, queer revolution, or celebrating as a community. A few attendees pointed specifically to the style of music. Bill Dupp, a Castro nightlife DJ, said that while he himself includes hip hop and rap in his sets, "gangster hip hop" songs are not what gay pride is all about. Top 100-style gay anthems by pop singers like Madonna, Cher, Kylie Minogue, etc. would be more appropriate, said Dupp.
Attendee Joshua Smith, who helped organize the Global Village stage this year at Pink Saturday, responded by saying that the night's discussion needed take into account viewpoints across all demographics, including youth of color. Dyke March organizer Rosa Hernandez noted that one genre of music can't be blamed for the event's problems.
Other attendees mentioned making the event more programmatically diverse by using the Castro Street Fair as a model. Right now, Pink Saturday party stages are mostly filled with music and dancing, with not much else goes on during the event. One person mentioned leaving the Frameline Film Festival at the Castro Theatre and being bombarded by a sea of people all were looking around for something to do. 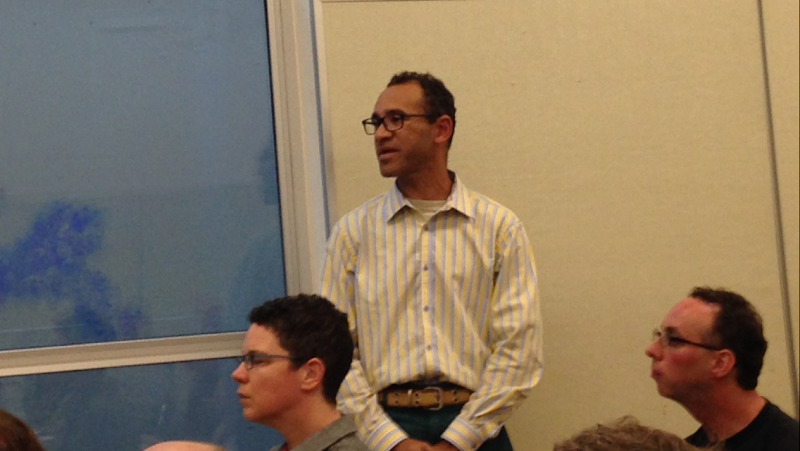 Global Village stage organizer Joshua Smith
The biggest discussion of the evening, though, centered around crowd control and increased security presence. Chief Perea said that he had 100 SFPD officers dedicated to the event and could have used 35 more, but that his station, like others around the city, is suffering from a staffing shortage, with the city police department currently running at a 300 officer deficit. Perea said that during last year's event, he received requests for backup from officers on the beat and had to tell the officers he was unable to send them help. "It makes me sick," Perea admitted.
The problem does not lie with the general crowd, but with those coming to the event specifically to cause trouble, said Chief Perea, who noted that during this year's event several "validated" gangs came into the event space. Chief Perea said he made sure that gang members knew their presence was noticed by posting platoons at the gate before they entered and having them followed once they got in. However, he said, diverting officers to these tasks and to large brawls creates a cop visibility "perception" problem, though if all police officers are being diverted to another area to handle a disturbance, the lack of police visibility is actually a reality.
How to step up safety
What's the solution for these issues? More private security? An SFPD "police share" with neighboring city forces? According to The Sisters, there just isn't enough money for increased private security, with Sister Selma Soul saying that the event is just barely breaking even and collects, on average, less than a dollar per attendee. Castro Community Benefit President Andrea Aiello noted that the CBD has been chipping in to help cover some of the costs of cleanup. And when it comes to outsourcing cops, Chief Perea said that police officers from other units in the Bay Area may not have the type of training necessary to deal with the San Francisco-style events.
Brian Hill of Castro Community on Patrol said a major problem for the event is the access to alcohol. Although Selma Soul noted that event goers are checked for weapons and alcohol before going into the party, Hill observed that merchants inside the event's footprint sell alcohol and one merchant was seen selling alcohol in to-go containers through a store window. Other community members agreed that access to alcohol and open containers, especially for minors, is a problem that leads to a more unruly crowd.
Local photographer Bill Wilson suggested, as a way to generate revenue without charging a mandatory gate fee and a method to quell underage drinking, that next year's event organizers could sell wrist bands to people 21 and over. These wristbands could gain people entry into bars and make it easier to determine who should or should not be drinking.
The party continues?
Most people at the meeting seemed to agree that the city needs to significantly step up its support, both financially and in terms of safety resources, to help make the event a success. Sister moderators mentioned that the event is not currently run as an official city event, so the group has not applied for the grants from the city that groups like SF Pride usually receive.
Last night's community discussion was an opportunity for the Sisters, Supervisor Wiener, and the SFPD to get feedback and ideas for how to proceed with the future of Pink Saturday. Sister Selma Soul said that a decision on the issue would be made by November at the latest.
Although no firm decisions were made at last night's event, there was consensus around retaining the Pink Saturday celebration by ending it earlier, securing it better, and changing the programming to make the Castro a safe space for people of all ages and backgrounds to come and celebrate Pride.
Sister Mae Joy Be With You offered the final invocation for the night, asking attendees to think three, five, even 25 years into the future with regards to Pink Saturday, and reminding people to never underestimate the power of small incremental changes.
Hopefully, whatever changes the Sisters and City officials make regarding the future of Pink Saturday, they will reflect the optimism of Sister Mae Joy's words.
San FranciscoCastro
Sep 30, 2022