After 30 Years, Escape From New York Pizza Bids Adieu To The Castro

Photo: Roy McKenzie/Hoodline
By Roy - Published on September 13, 2014.
San FranciscoCastro
Next week, Escape from New York Pizza (508 Castro Street) will close up shop in the Castro. The restaurant shared the news via a note in its window, which bid the Castro a fond, yet sorrowful farewell after nearly 30 years of serving Castro revelers and pizza lovers. "Regrettably we have been forced to sell our Castro store," it reads.
We went inside and spoke with Trixie, one of the pizza shop's employees. When asked if the closure was was related to a rent increase, as so many others are, Trixie said that was not the case, though rent was high. She explained that because of expenses related to upgrading old ovens, repairing the interior,  and providing employees with healthcare benefits under the Affordable Healthcare Act Employer Mandate starting in 2015, the chain could no longer afford to stay in the Castro.
The chain's other five locations will remain open, and the note in the window recommends that Escape From New York lovers can still get delivery from their Haight and Mission locations.
Next up
Even as Escape From New York leaves, another business is already planned to take its place. The next business has filed a DBA (doing business as) with the Office of Treasurer-Tax Collector for the restaurant name "Oz." According to Trixie, Oz will also be a pizza shop. The new owners have also posted a note in the back inviting current employees to stay on for the location's next incarnation.
For now, the awning treatment has been taken down and the decor inside the restaurant removed. Escape From New York's last day will be this coming Wednesday, September 17th. 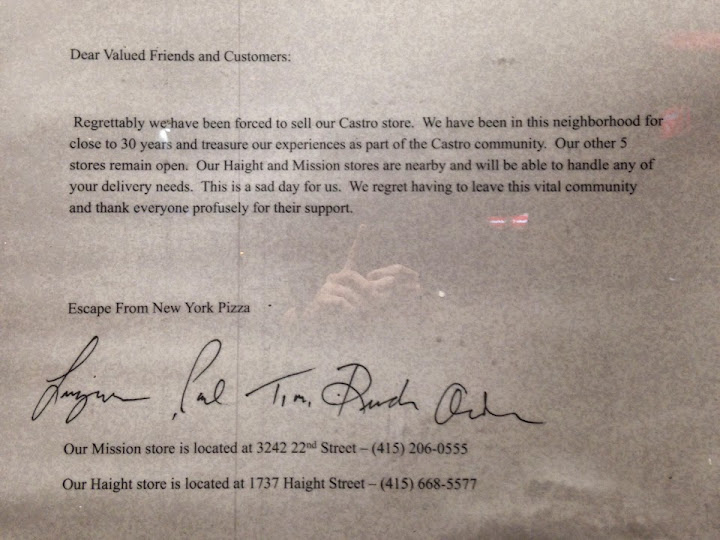 Roy McKenzie/Hoodline
So long, and thanks for all the cheese!
San FranciscoCastro
About 17 hours ago