Photos: Ayo Suber/Hoodline
By Ayo Suber - Published on November 25, 2014.
San FranciscoHayes Valley
If you’ve got questions about those fabric-wrapped trees on Hayes Street, we’ve got answers.
As it turns out, Hayes Valley was one of five neighborhoods in the nation selected to be decorated by an interior designer for American Express’ Small Business Saturday, coming to the neighborhood this weekend.
Designed as an antidote to the big-box shopping frenzies of Black Friday and Cyber Monday, Small Business Saturday was established on November 27, 2010 and aims to celebrate the "Shop Small movement" and drive shoppers to local merchants across the country.
To celebrate the upcoming event, LA-based textile designer Kathryn Ireland of Kathryn M Ireland Designs and her team have dressed a selection of local trees in her hand-printed fabrics, and are also decorating the windows at Through the Hayes, Public Bikes, Zonal, Sean, and Fiddlesticks. 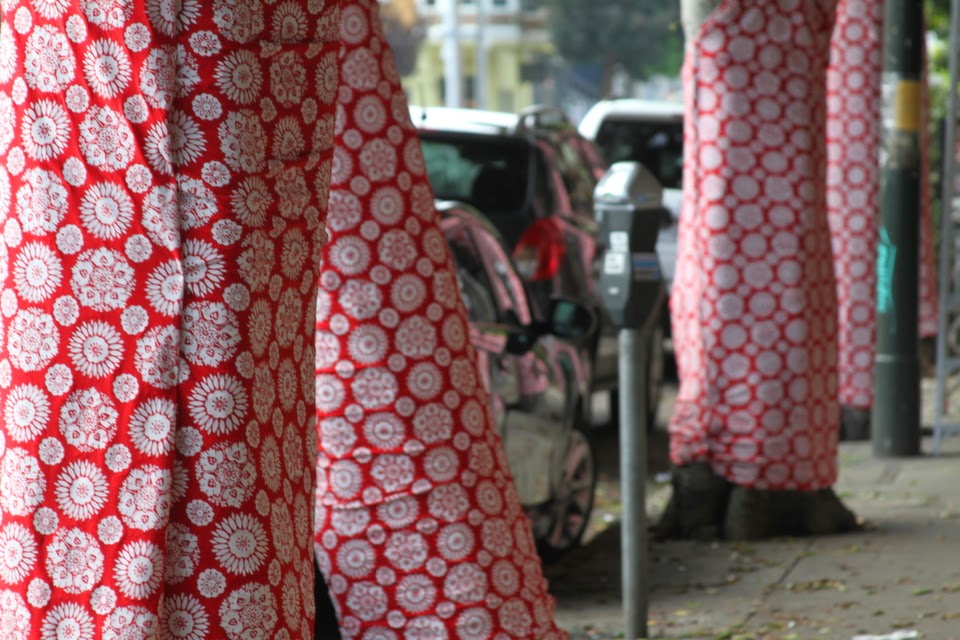 When we caught up to Kathryn, she was decorating Zonal’s window display. “I got a phone call from American Express,” said Kathryn, when asked how she got involved. “I’m a textile designer, so it was obvious what we were going to do. I was going to wrap the trees in my fabric ... I pretty much gave them a presentation and they loved it.” She used a print she had previously designed and decided to go with spandex for fabric, which allows the material to move fluidly around the trees. Lights, ornaments, and "Shop Small" signs add to the decorations.
The idea behind the window design was to carry the aesthetic from the street into the shops. “I’m trying to bring the various shop owners and shopkeepers into the street, so people know they are connected.” 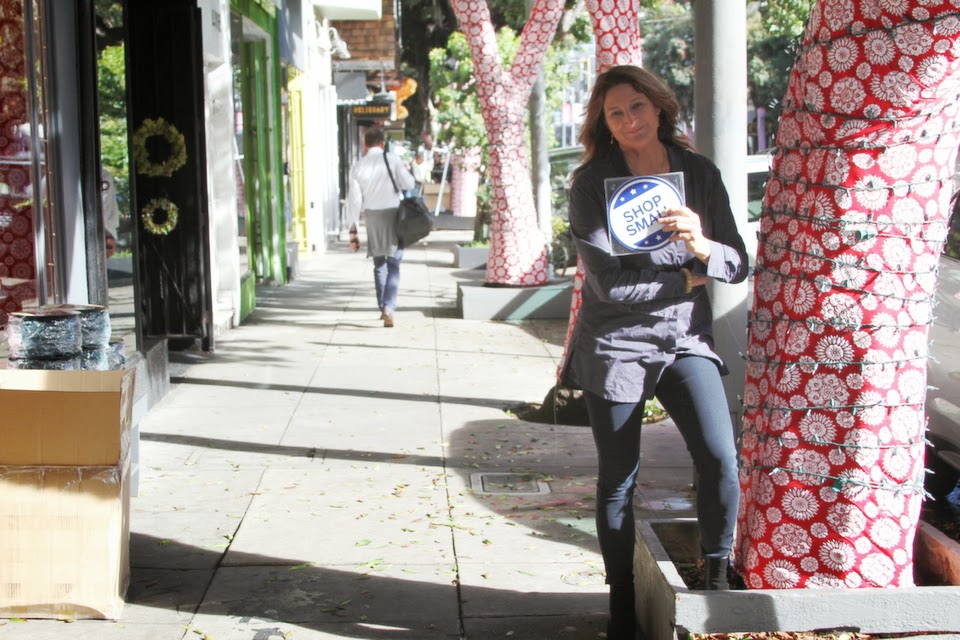 Russell Pritchard, owner of Zonal and president of the Hayes Valley Merchants Association, originally got the neighborhood involved in Small Business Saturday a few years ago. He and Kathryn worked together to selected the storefronts to be decorated.
“I did it so we would have an interspersed storefront visibility from Laguna down to Octavia, so that you see the visual as you walk from one end of the street to the other end, rather than having stores all on one side or grouped together,” said Russell. Katherine was given complete creative control, but she’s working with shop owners to incorporate their ideas into the design as well.
For Kathryn, the decision to come to the Hayes Valley neighborhood was clear. American Express let the designers for the project pick the city neighborhood they most wanted to work in. “I came to San Francisco and decided that Hayes was the best street for me to do this. There’s a lot going on on this one block.”
Kathryn says the best part about working this event is the camaraderie. “To me it goes back to my old job when I was in production, when we had to get stuff done on time and on budget. And it’s fun working with all these creative people.” She says she likes that the event promotes small businesses. “Being a small business owner myself, I know just how important it is that they are promoted, that we shop small, and that everyone supports them." 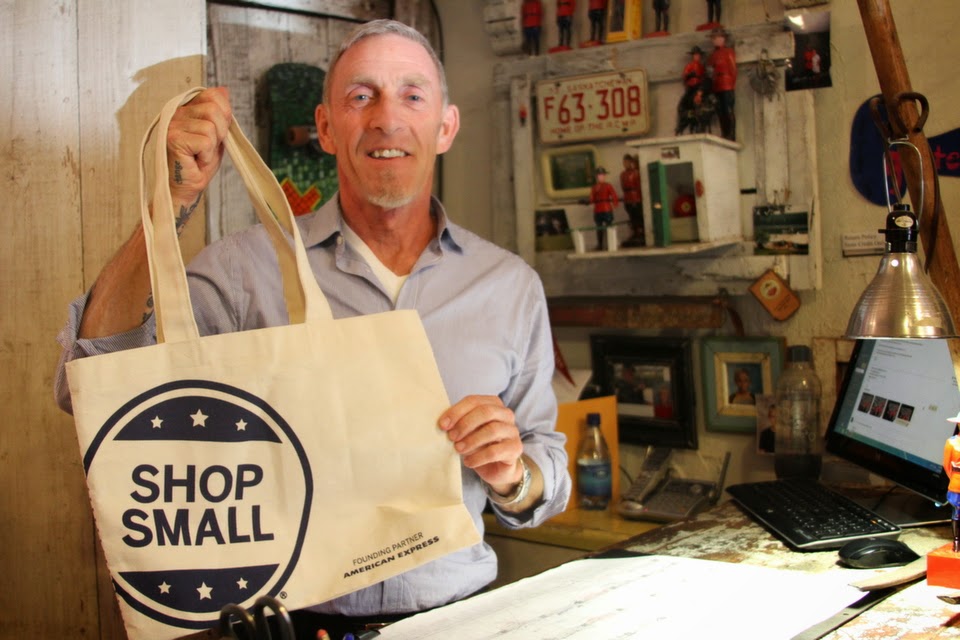 “Saturday is actually our day where we see the highest traffic pattern,” said Russell, who notes that Small Business Saturday is a boon for the neighborhood. “Because Hayes Valley is so unique, anybody that has family or friends coming from out of town [brings them] to Hayes Valley. So it's very good timing.”
All Hayes Valley shops, and any small business participating across the country will receive giveaways, including Rebecca Minkoff-designed canvas bags to distribute. Though local stores may be hosting special events, sales and surprises, the main purpose of the day is simple:  "Just come on in and support local," says Russell, whose store has in the neighborhood for 24 years.
Come check out the final decor,  recover from your Thanksgiving meal and support local businesses during Small Business Saturday, coming up on November 29th. We'll see you there!
San FranciscoHayes Valley
Sep 30, 2022