If you live around the Haight but haven't heard of (let alone seen) Mount Olympus park, there's a good reason for that: it's almost as hard to find when you're looking for it as it is to discover accidentally.

Mount Olympus is the peak of a hill at the center of Upper Terrace, between Ashbury Heights, Corona Heights and the Castro on a spot that was once (but is not currently), according to the San Francisco Recreation and Parks Department, considered the geographic center of San Francisco.

Now obscured by trees and houses, the monument at the top of Mount Olympus is no longer even visible from below.

Information about the monument is scarce: it's referred to in passing in Adah Bakalinsky's Stairway Walks In San Francisco, but most available information on it dates from a Cityguides article by Susan Saperstein and a related FoundSF piece by Annalee Newitz.

The park was dedicated to the city in 1887 by former San Francisco mayor and entrepreneur Adolph Sutro, who built a local fortune with his earnings from the Comstock Lode and who gave a number of more famous parks to the city.

Upon its commemoration, the park was topped with a statue, called Triumph of Light, that stood above the 553-foot peak; the statue remained in place, slowly deteriorating until it was removed in the late 1950s. According to Cityguides, nobody knows what happened to the statue after it was de-throned.

Below are two views of Mount Olympus, taken in the 1940s, with the peak of Buena Vista Park in the background. 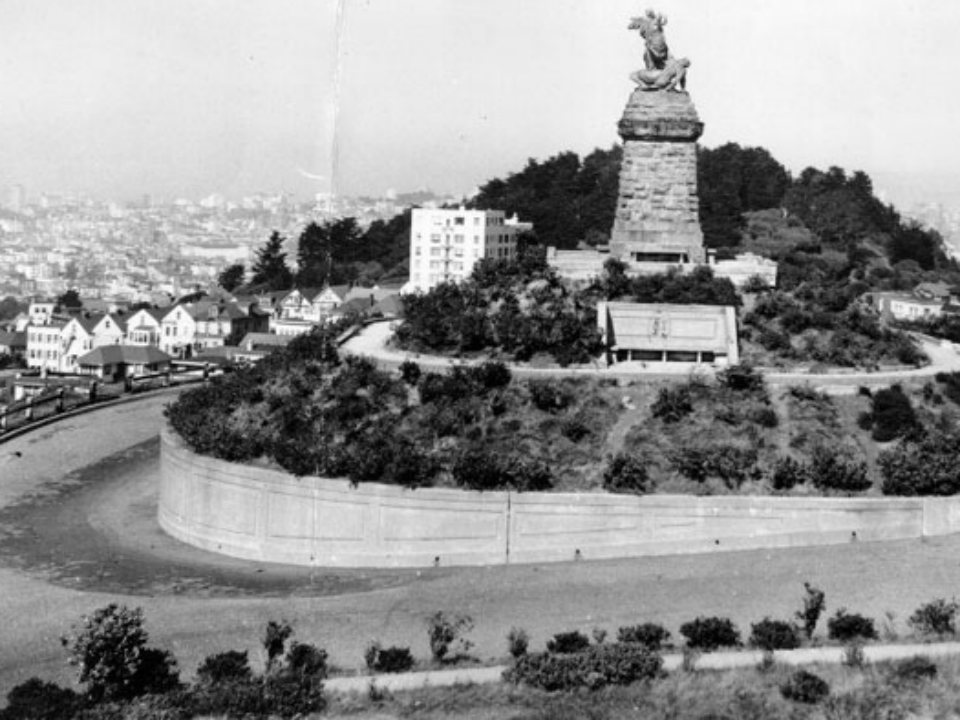 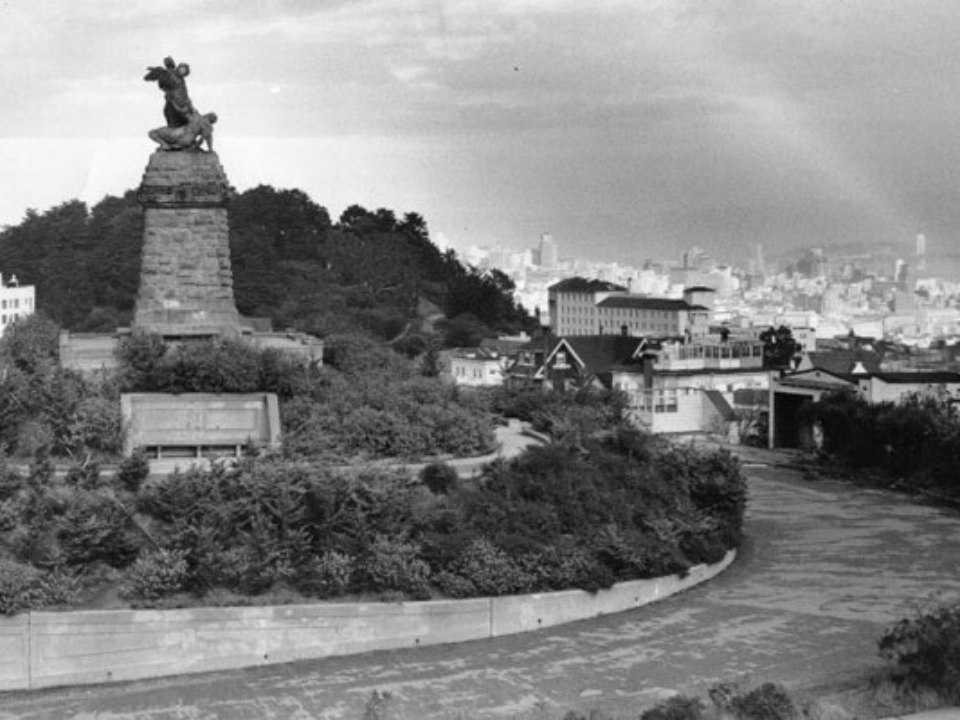 The park is remarkable not only for the fact that it marks the heart of the city, but also because it commands near-360 degree views, albeit now largely through trees.

Below is a view looking west, towards Mount Sutro (which, as we recently learned, was once logged for timber) from the park: 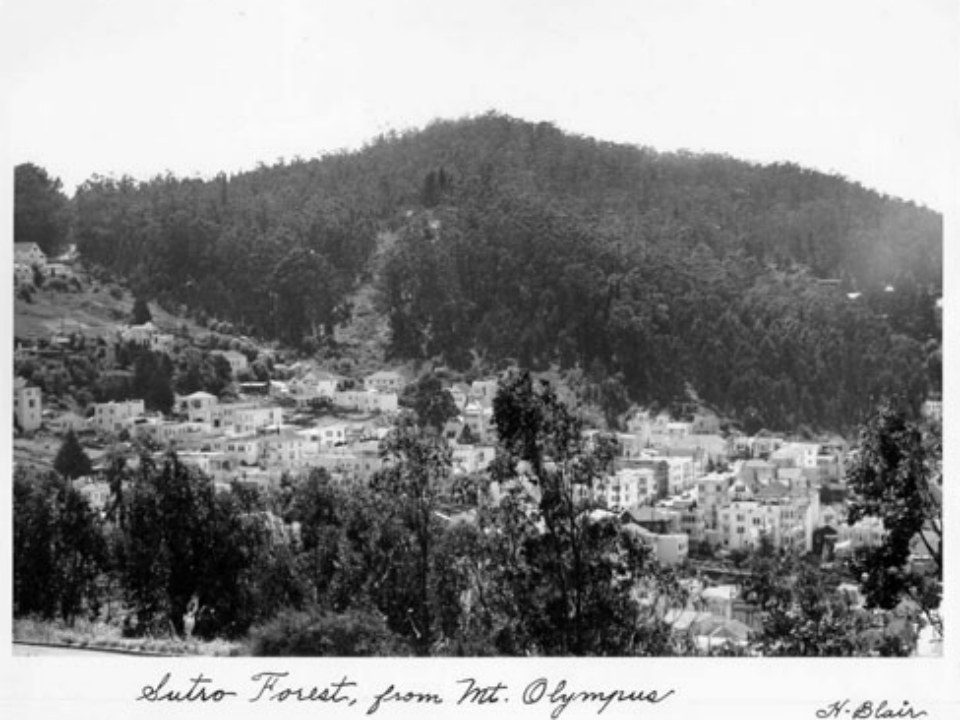 As late as the early 1960s, the park would have been a familiar component of the skyline from the Sunset, the Haight, the Mission or the Castro. Below, a photo dating from the 1950s, as seen from Collingwood and 22nd: 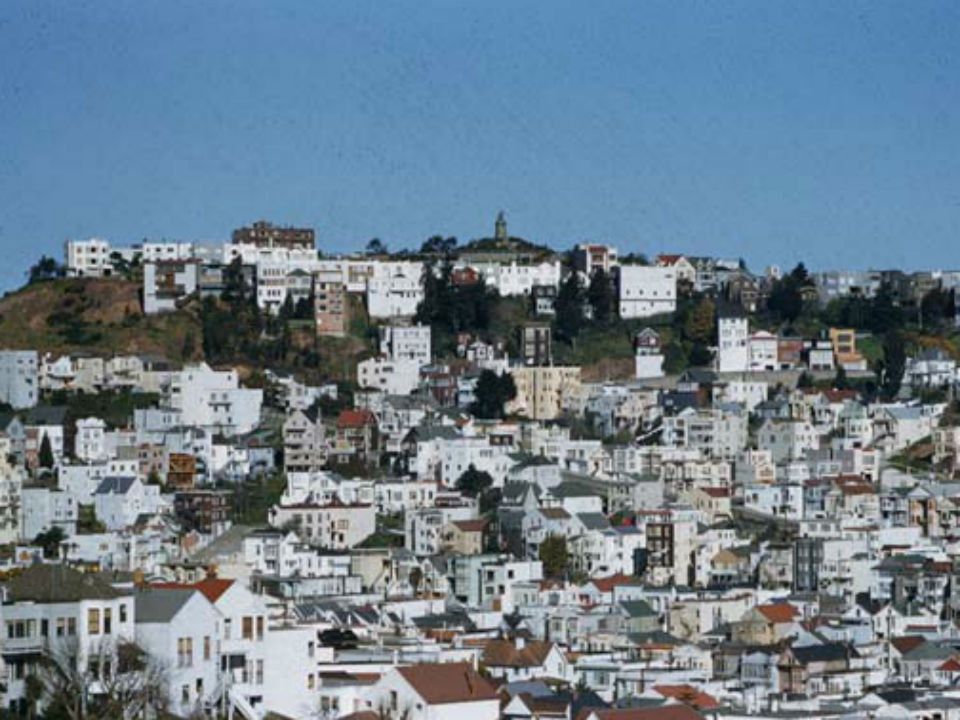 (Photo by Charles Cushman, via Flickr/IMLS)

And for fun, dating from the same period, a shot looking east over the Bay with Corona Heights in the middle-distance and Mount Diablo on the horizon. 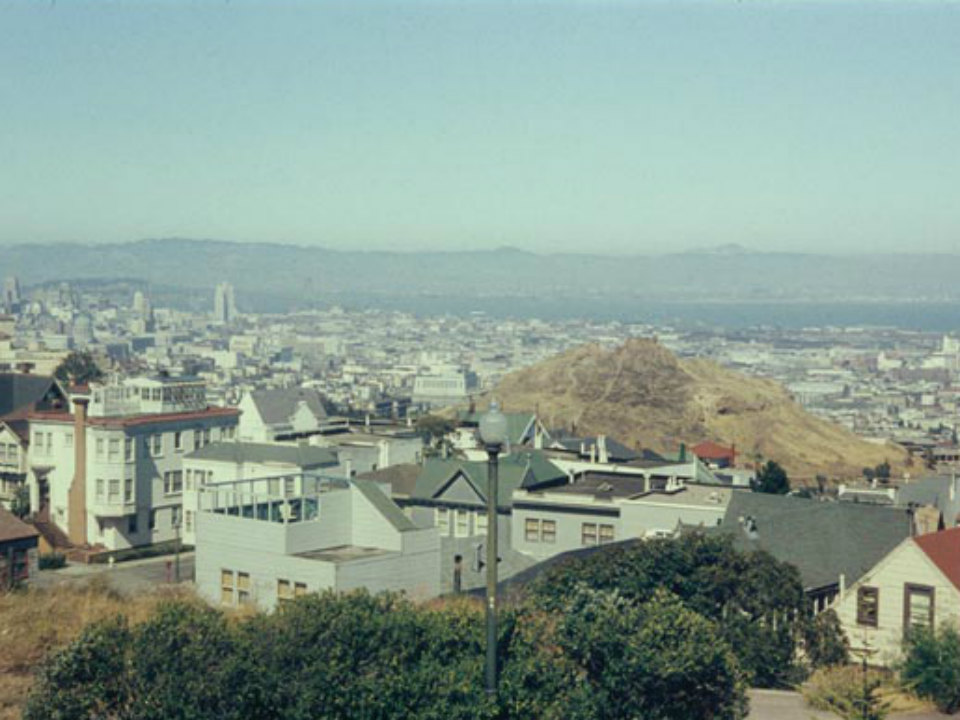 (Photo by Charles Cushman, via Flickr/IMLS)

In the late 1960s, according to Cityguides, neighbors attempted to buy the land to preserve it from development. But they weren't successful, and the park is now surrounded by a ring of homes and condominiums.

Mount Olympus still offers a fantastic view of the city, though, and is accessible via a short hike from the 33 stop at Clayton and 17th Street, or by a slightly more strenuous ascent directly from the Haight or Castro. No signs mark the way, though, so bring your own map and a bottle of water.

Update: Don't miss the juicy additional details from Zann Cannon Goff in the comments below.