Sanford is the sixth chief to lead Park Station since 2008 and replaced Captain Raj Vaswani, who was transferred to Bayview Station.

The sudden change in leadership was a hot topic for discussion for many attendees, including Sanford. “I’m sure you’ve figured it out by now, but I’m going to let the cat out of the bag,” he said, introducing himself. “I know the personnel rotation has been frustrating for some of the merchants and residents,” he added. 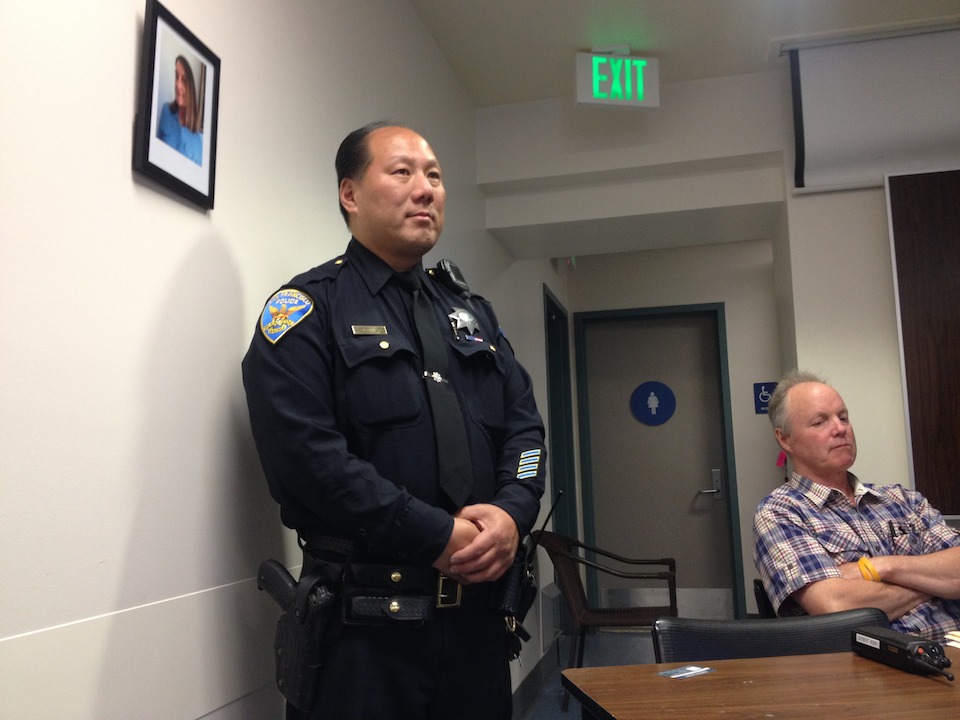 Despite the change, “anything that was established with Captain Vaswani, we want to make sure that we continue that commitment,” said Sanford. “I am so committed to this post.”

During his 29 years in SFPD, Sanford has worked Patrol, Investigations, Administration at the Airport Bureau and was once on a Narcotics team with current SFPD Chief Greg Suhr. A Bayview native, Sanford also served as Captain of the Taraval District. “I am delighted about being here in Park Station,” said Sanford.

Representatives from seven neighborhood groups across Park District filled out the audience, along with many interested residents and a few of Sanford’s friends. “I knew him before he was born,” said Bayview resident Laura Baker.

Sanford said his first shift at Park Station lasted 16.5 hours due to a “critical incident” involving a barricaded man on Lyon St.. Following department protocol, a hostage negotiation team, a SWAT unit and other support units were called to the scene. Despite the tense situation, Sanford said the standoff became an opportunity to engage with the community after local residents Jim Connor and Lewis Sykes “were gracious enough to open their garage as we set up and worked logistics.” 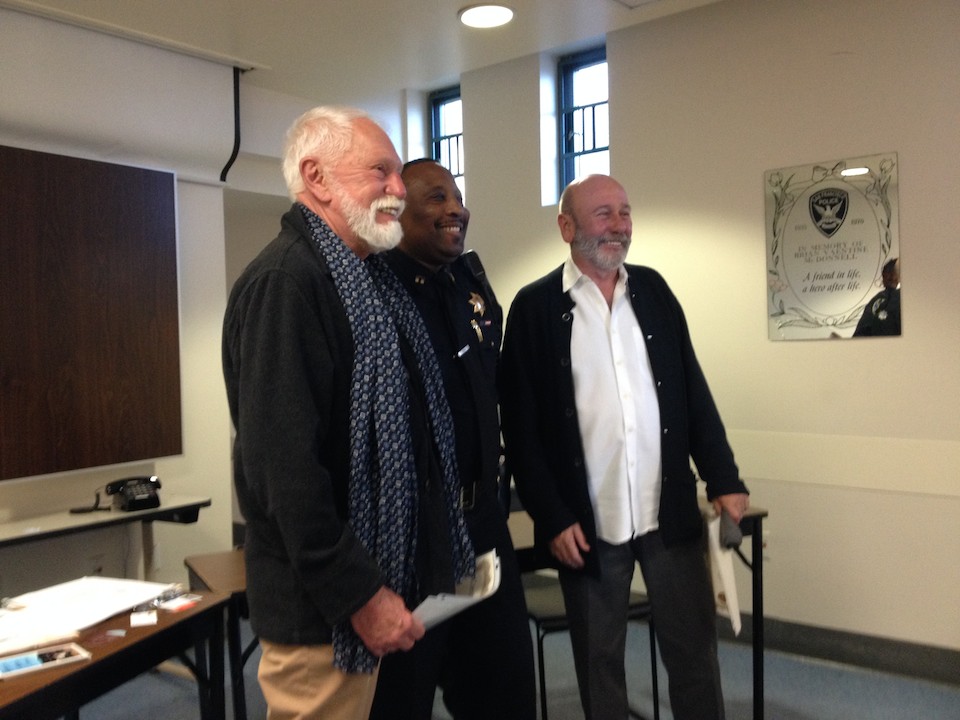 The impromptu command center was in place for four hours while SFPD worked to resolve the situation. “That came to a very successful end, I’m very happy to say,” noted Sanford, who presented certificates of appreciation to Connor and Sykes. “They made our jobs so much easier that night,” he said.

“I am not a big fan of statistics,” said Sanford, kicking off a review of year-to-date crime numbers for Park District, as follows:

The number of thefts from cars is “way too many,” said Sanford. “It’s totally tearing up the district, but it’s obviously not just this district, it’s citywide.” He urged drivers to remove any and all items of value from a parked car, including the change in a coin tray or a cell phone charger. “It will help us tremendously,” said Sanford, “and it will discourage a lot of these thieves.”

With summer approaching, Sanford said the district’s homeless population will likely increase. With four officers handling homeless outreach, “I feel pretty confident that you will start seeing some pretty aggressive police work,” said Sanford. “We have to have empathy and compassion, but we’re not going to tolerate blatant violations of the law.”

In response to a complaint about the number of people congregated near the McDonald’s at Stanyan & Haight, Sanford said there’s little SFPD can do to compel anyone to leave. Unless an officer observes a violation of the law, “We’re limited as far as the actions we can take.” Officer Jeff Sung said colleagues discourage people from hanging out and enforce the city’s sit-lie ordinance on the active corner.

“But, the dollar menu, the fast food, the economics; we understand what attracts them there,” said Sung. Vallie Brown, a legislative aide in Supervisor London Breed’s office, said she’s met with the owners of the McDonald’s on Haight, who also own another location on Fillmore at Golden Gate that sometimes generates complaints. 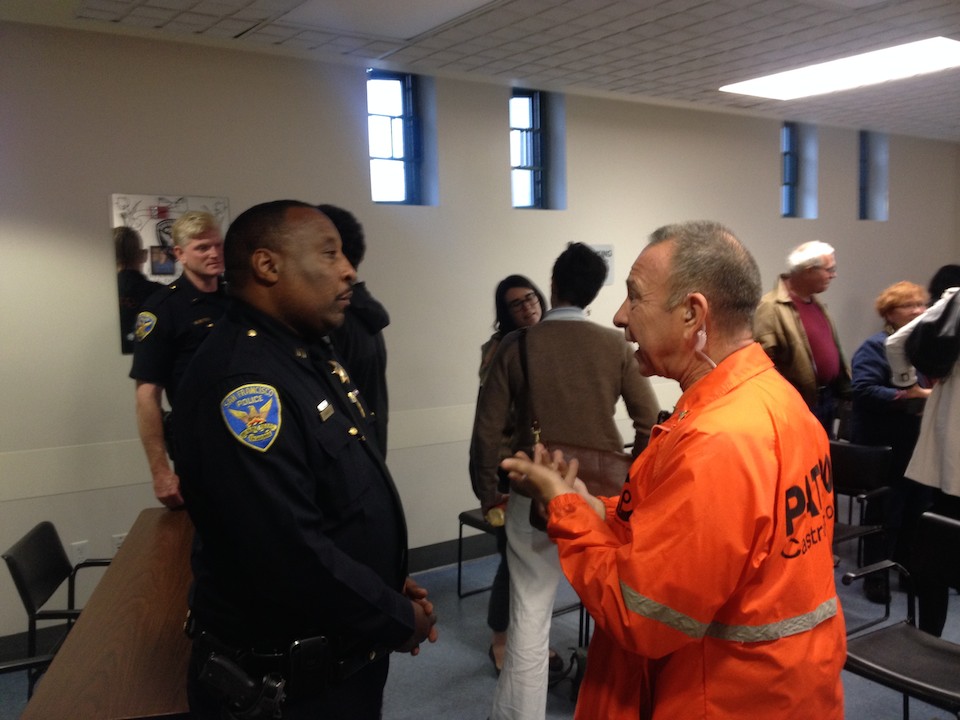 Capt. Sanford with a representative of Castro Community on Patrol

“They need to take responsibility for their property,” said Brown, “but before we pursue legal options, we want to give them a chance.” Brown said she’s worked with Vaswani and City Attorney Dennis Herrera to come up with solutions. Sanford said his officers will start “bundling” ongoing violations for repeat offenders so judges will issue stay-away orders. “We’re not going to let up,” he said. Brown also encouraged merchants and residents to write Community Impact Statements for judges to consider during sentencing.

With the 4/20 Day celebration coming up on Monday, Sanford said he’s been in close touch with Supervisors Breed and Scott Wiener to address security, trash and public safety. “I understand that it has been somewhat troubling in the past,” he said, adding that Breed’s office “has been tenacious to make sure that we are on top of it.” To deal with a expected crowd of approximately 10,000 to 15,000, Chief Suhr has directed Sanford and Vaswani ro collaborate on a response plan.

As we noted yesterday, Sanford and Brown are holding a 4/20 Day info session on Friday evening, where they will review proposed street closures, DPT cleanup and other plans for the yearly pot-smoking celebration, which has become one of the largest annual gatherings in the district.

Friday's meeting will be held in the community room at Park Station, where monthly meetings are held on the second Tuesday of each month. (The next one will be held on May 12th: look for the Hoodline recap on May 13th.)

Park Station is located at 1899 Waller St. between Kezar Stadium and Kezar Drive.