Street Running Between Kearny Steps Getting A Much-Needed Makeover

After a long and uphill battle—fitting for the location—the street that runs through the steep, scenic Kearny Steps is finally getting a much-needed makeover.

The 1100 block of Kearney Street from Vallejo to Broadway streets has been in disrepair for years. The steps, also named the Peter Macchiarini Steps after the Italian-American modernist sculptor and jeweler who owned a studio on Grant Avenue, is a big tourist destination. But it's also something of an embarrassment.

Everyone who climbs to the top of the steps is treated to a spectacular view of downtown, but has to look past cracked, weed-ravaged pavement, graffiti, and a lack of any immediate aesthetic interest. The new plans call for repaving the street and adding landscaping; no improvements will be made to the steps themselves. 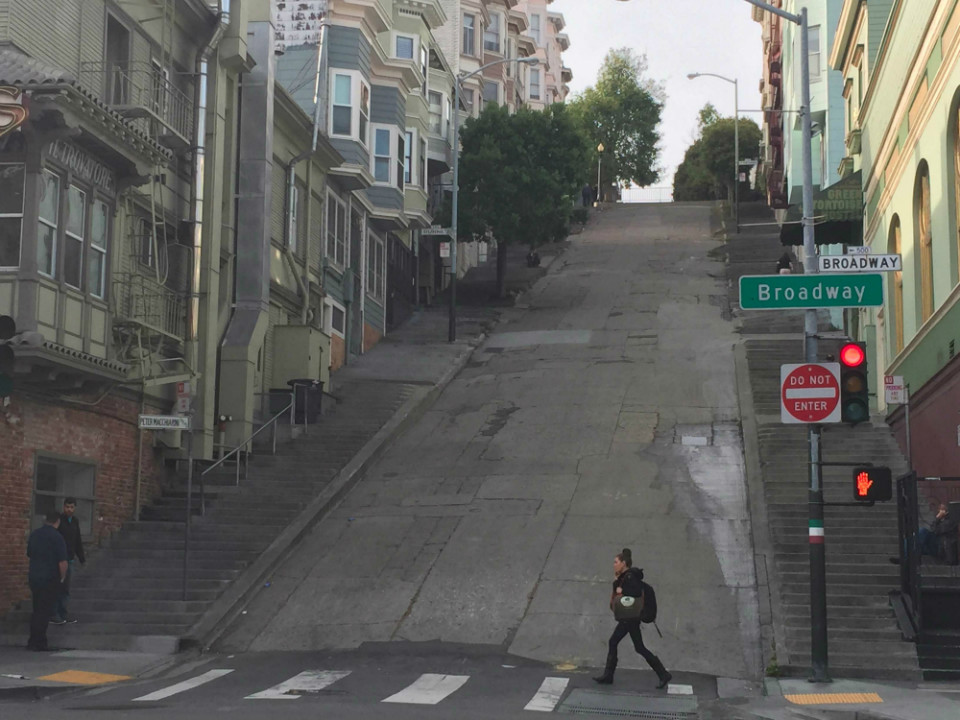 A community meeting Tuesday night at Monroe, 473 Broadway St., recapped the project's history and looked ahead to starting beautification efforts. San Francisco Public Works will fund the project to the tune of around $700,000–$750,000. About 20 neighbors, including people with homes adjacent to the steps, local business owners and District 3 Supervisor Julie Christensen, attended.

Stephanie Greenburg, president of SoTel Neighbors and the Top of Broadway Community Benefit District, opened the meeting by giving a bit of history. "About 10 years ago there was a beautification project proposed for the Kearny Steps," she said. "There was widespread support, everyone was really excited about it and alas, it didn’t happen. There were funding problems." In 2012, when SoTel Neighbors formed, one of the priorities the group identified was the 1100 block of Kearny Street. "We really wanted to see a streetscape that was worthy of the view from the top steps," she added.

Finding there was still strong support for the improvements, they contacted Public Works and got together with them in 2013 to discuss preliminary plans. In 2014, Public Works presented minor alterations to the plans to the board of directors of the Top of Broadway CBD, Greenburg said, which started to organize efforts. They raised some questions, so Public Works went back and worked on things; namely, utilities.

"In February, they came back with revised plans and a broad overview of the project," Greenburg said. They took feedback from neighbors and the Top of Broadway CBD and came up with a conceptual plan. After more feedback and refinements, they presented the plan Tuesday night with more details about materials and a timeline. They plan to start construction April 2016 at the earliest.

Project manager John Thomas and landscape architects Lizzy Hirsch and Gabe Meil, along with intern Kevin Quach, represented Public Works at the meeting. Hirsch gave the bulk of the overview, pointing to display boards that showed the progress of the project. She emphasized that this is a road project only; there are no monies for pedestrian improvements such as a handrail. Jerry Hurtado—who's lived on the steps since 1978—has been requesting that, but it would be a separate project. 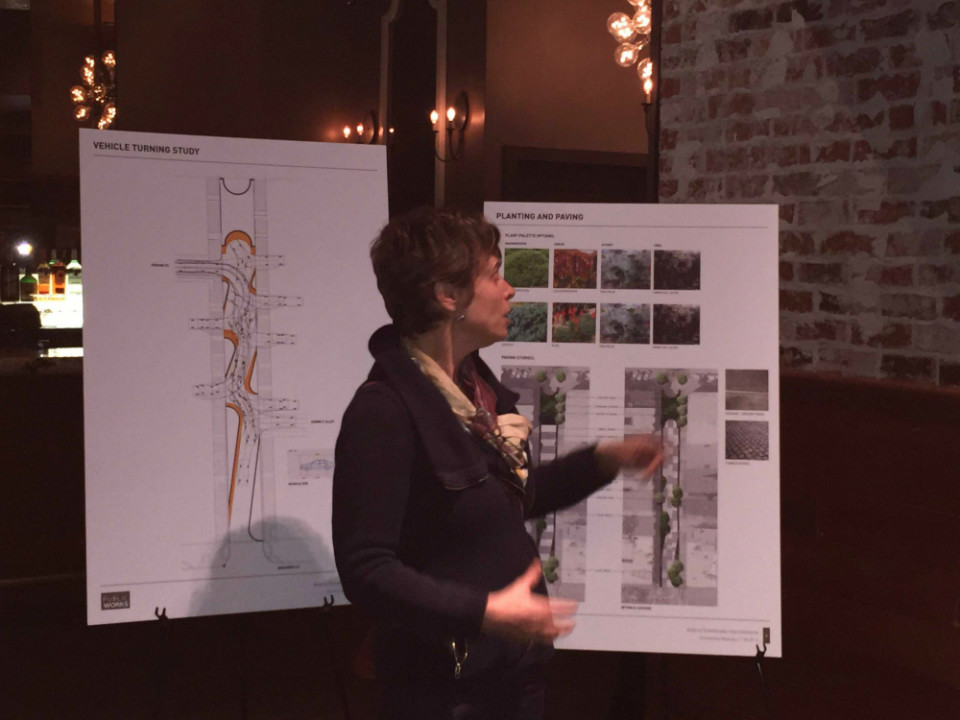 The new paving plans call for either a "striped" or "cascading" (also called a checkerboard) design. Community feedback indicated the striped design was preferred, so Thomas later said they'll move forward with that. Plantings will be either Mediterranean or succulent, but both call for olive trees and fan palms.  Hirsch said the new landscape will be placed in a curvilinear design. "It’s going to break up the linear direction of that street and allow trees and vegetation to weave in and out," she said. As for the plants, she said, “We’ve come up with two options for people to consider. We’re in an incredible drought situation so we’re going for the toughest, most drought-tolerant plants you can think of."

One concern many neighbors had is how the new pavement design will affect drivers, particularly large vehicles such as delivery trucks, cable vans and Recology trucks. Hirsch said they'll first paint the pavement to replicate the new design and let neighbors take a spin on it to make sure it'll work for everyone. 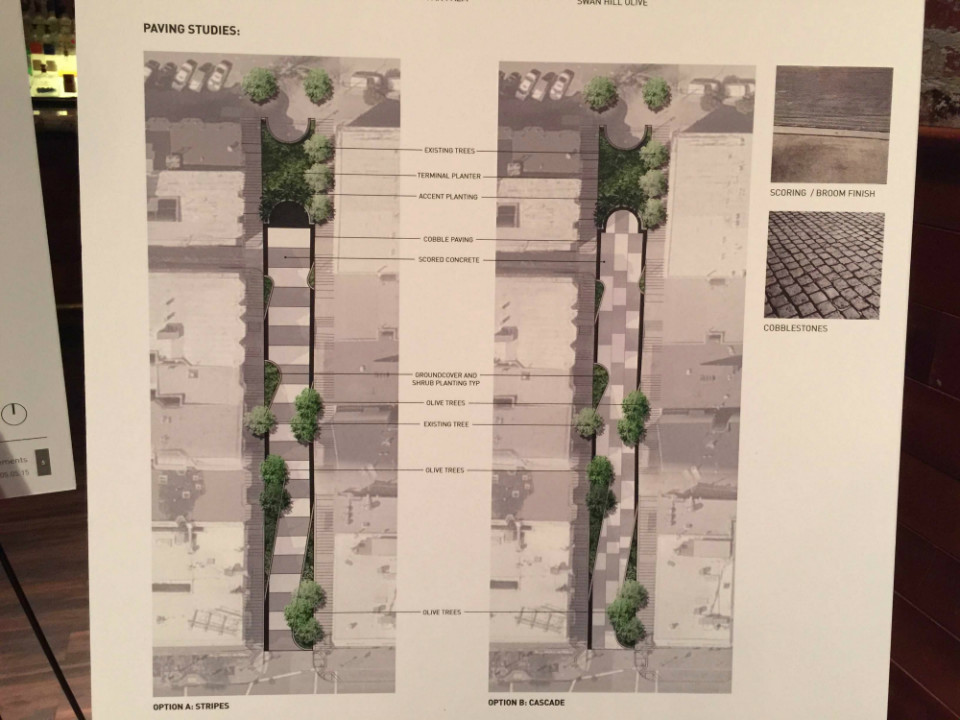 Another concern was long-term maintenance. The contract will call for three years of maintenance to make sure the plants are established, Thomas said, and the Top of Broadway CBD will be responsible for maintenance north to Dunnes Alley. "Beyond that, we don’t have an answer," Thomas said. Hurtado mentioned neighbors take care of the plaza at the top of the steps, indicating it would probably be a community effort. Hirsch said they're hoping to install quick couplers for watering.

Also, because the street will be repaved, Thomas said the San Francisco Public Utilities Commission will look at whether it will replace sewer and water lines during the project as well or whether they can go through manholes for the work. Sewers in the area date from prior to 1908, he added. "The good news is at the end of the day we’ll have a good, complete and rejuvenated infrastructure here," Thomas said.

Other issues and questions were raised, including making the steps less attractive to skateboarders and installing lighting and/or cameras to discourage loitering and nefarious activity. Some details will be worked out over time. The project plans aren't visible yet on the Public Works' Kearny Steps project page, but will be posted at some point. 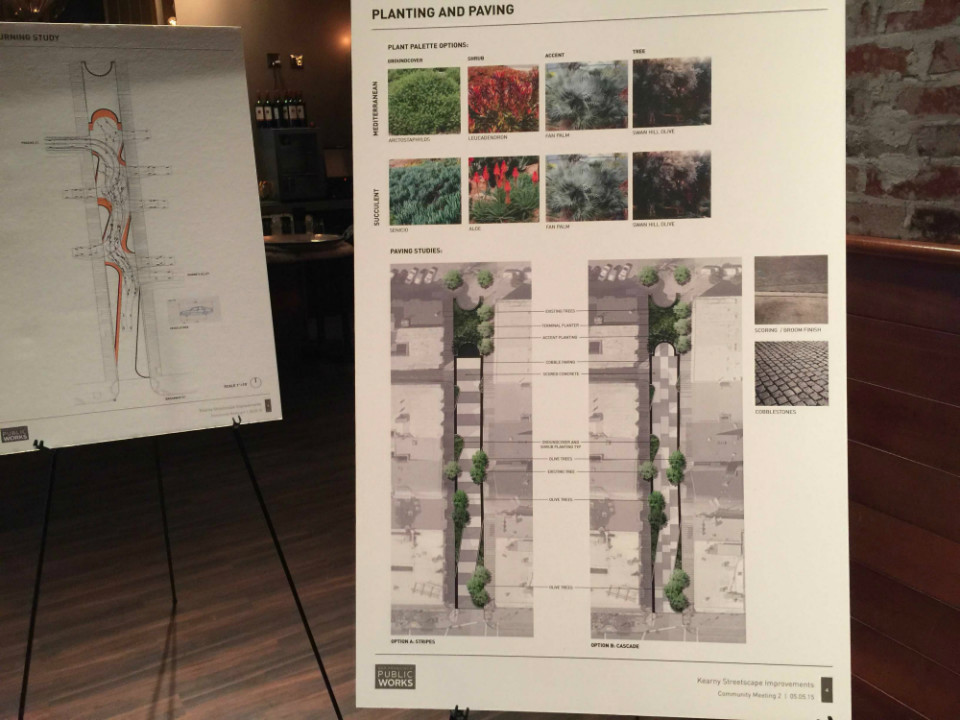