Last night, representatives from SPARC, the SoMa medical marijuana dispensary that hopes to open a second location in the former Good Fellows space at 472 Haight, met with the community for a second time, to discuss their plans and the potential impact on the neighborhood.

SPARC says the dispensary is still waiting on approval of its license transfer application from the Department of Public Health. The process has taken longer than expected, because the existing permit required sale of both marijuana and tobacco, and SPARC does not plan to sell tobacco.

If approved, SPARC will need at least another six months to get a building permit, do construction, build out the interior of the space, hire staff and raise money from investors. If all goes according to plan, it hopes to open in late summer 2016.

SPARC has other, less institutional hurdles to break through: namely, concern from community members over violence and crime related to marijuana.

"I've lived on Haight for 12 years, and there has been so much violence on this street because of weed," said Azam Khan, whose business, Love Haight Computers, would share a wall and a balcony with SPARC. Khan also voiced concern that a dispensary would attract more burglars to the area.

But a number of local residents and merchants also showed up to last night's meeting in support of SPARC. Hasan Khader, owner of Kate's Kitchen, cited SPARC as the block's solution to a recent slump in foot traffic.

"I’ve been here for 25 years, and the neighborhood has changed," said Khader. "Having a successful, professional business will bring more people to the neighborhood. We really need it, because a lot of businesses are closing."

Ryan King, a SPARC member and resident of the 500 block of Haight Street, also chimed in to support the dispensary.

"I don't have a safe place to get [marijuana], and I don't want to call some sketchy delivery guy or peddler on the street," he said. "This is something that we need, and it's going to be harder to get it if SPARC doesn't go in."

SPARC has three dispensaries and five cultivation sites in the Bay Area. Each location, they claim, has garnered support from surrounding residents and merchants.

"There will be issues that come up, and yes, maybe this location will be our most violent," said SPARC executive director Robert Jacob. "But we have a perfect track record of solving community issues."

For the moment, SPARC doesn't plan to host any more community meetings; they'll move through the application process as usual, addressing concerns with individual neighbors and merchants. If you weren't able to attend the meeting but have a concern about SPARC moving into the neighborhood, contact them and they'll be in touch.

Update: Reader Michelle raises a great point. Is the location within the official boundaries for where the city and state allow dispensaries currently, given the nearness of a couple schools?

City regulations prohibit dispensaries within 1000 feet of a community facility of any kind for people under 18, and the state limits them within 600 feet of schools.

According to a planning map from a city study last year, the location is apparently within range of the John Muir school. Maybe it's grandfathered in as KWillets suggests. Or maybe everyone is just assuming that it's all going to get legalized soon anyway?

Orange shows where dispensaries are currently allowed, yellow shows if the law were to change under a plan the board of supervisors has mostly ignored. 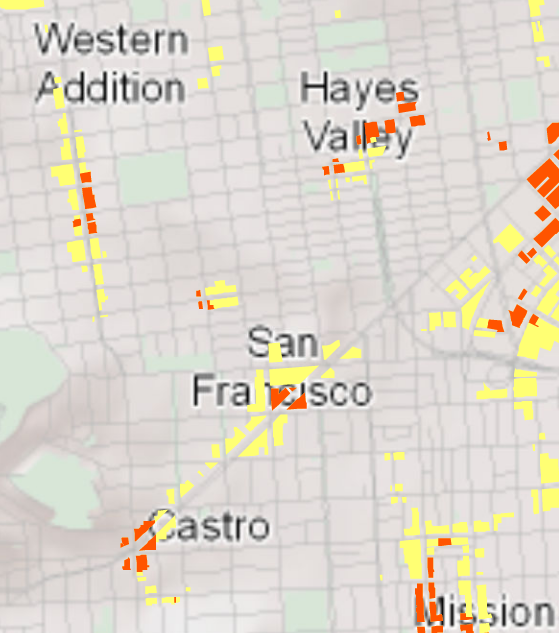