The Secrets Of The Buildings At The Base Of Fell Street

In the 1850s and 1860s, Colonel Thomas Hayes, original franchisee of the Market Street Railway and county clerk of San Francisco, built a park for city dwellers looking for an escape from the bustle of downtown.

His namesake street is the commercial center of the neighborhood today.

A block to the south lies a stretch of Fell Street that is also rich with city history. Like the obscure figure it's named after, much of its past is forgotten today. 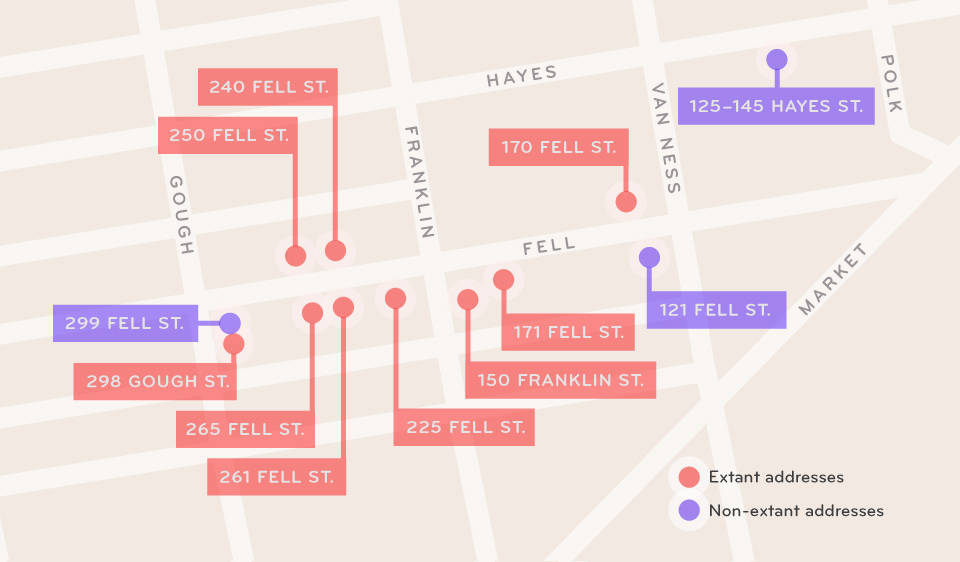 William Fell, like Hayes, also built a getaway destination for early San Franciscans.  Supposedly a Danish-born merchant, he ran a popular roadhouse resort in the 1850s called San Souci on the shores of a small lake near Fulton and Divisadero streets. The building was destroyed in the 1920s.

Little else is known about Fell, but we've unearthed some of the long history of the street that bears his name—or at least the eastern end of it.

The oldest institution on the section of Fell Street between Franklin and Gough may come as a surprise. Though the Nativity of Our Lord Roman Catholic Church at 240 Fell St. has a contemporary edifice, it is the oldest site on the block.

The first Polish immigrants came to the San Francisco Bay Area in the late 1840s. These immigrants wanted to have a church where they could conduct services in their native language.

Through organizations such as the Slavonic Mutual & Benevolent Society, they began petitioning San Francisco's Archbishop Riordan for a parcel of land. The petition was granted, and the lot at 240 Fell St. was purchased on January 6, 1903. A year and a half later, the church was dedicated, opening its doors on June 5, 1904. Unfortunately, just two years later, the church burned to the ground in the Ham and Eggs fire of 1906. 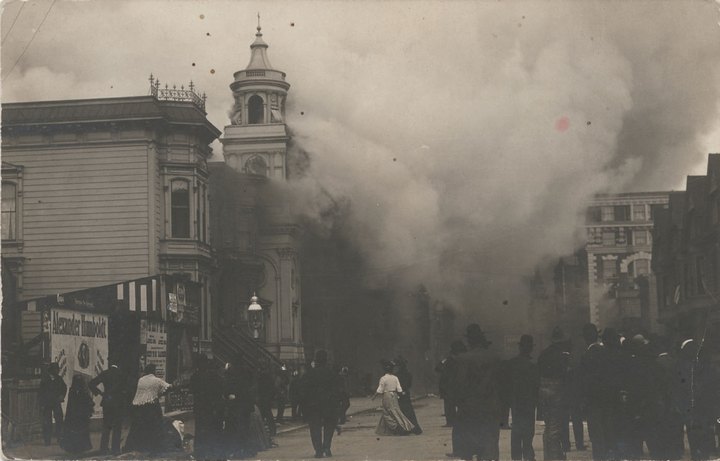 After its destruction by fire, the Nativity of Our Lord held services in a temporary chapel at Vermont and 18th streets. 240 Fell St. was rebuilt, with parishioners contributing stained glass windows, and the Austrian Military and Benevolent Society donating the Scagliola marble altar. The church re-opened for Christmas services in 1911. It is still in operation today. 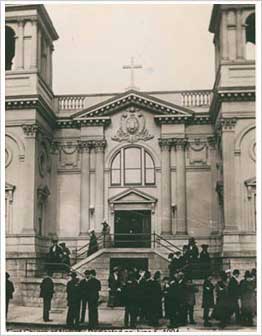 Just across Franklin Street at 171 Fell is the next oldest building. According to the San Francisco Planning Commission, 171 Fell St. was designed by architects Banks & Copeland and constructed 7 months after the 1906 earthquake. Owned by widow Carrie B. Wirtz of 725 Geary St., the building was a rooming house for some of the many displaced people who moved to Hayes Valley to live and work after the earthquake. Today, 171 Fell St. is one of the few SROs (single room occupancy hotels) remaining in Hayes Valley.

One of the unique features of Fell Street between Franklin and Gough streets is that it is home to two historic churches. In addition to the Nativity of Our Lord at 240 Fell St., there is the Episcopal Church of the Advent at 261 Fell St. Church of the Advent, present edifice

The Church of the Advent has a long history in San Francisco. Founded in 1858 by members of the Trinity Church, it was originally located in the Rincon Hill district before moving to 11th and Market where it was destroyed in the 1906 earthquake. 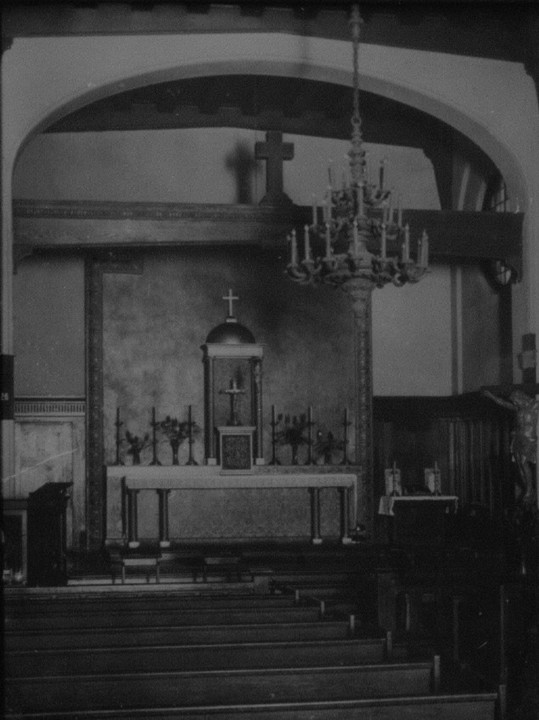 After the earthquake, 261 Fell St. was chosen as the site for the church's rebuild. Parishioners managed to secure a prefabricated building from a ship headed for Alaska, and this served as the church's home while a more permanent structure was built at Fell Street. The Spanish Colonial Revival building, with its courtyard and Hickory Street rectory, held its first service on Christmas 1910. Plans to build a larger church were abandoned in 1944 when the current church was finally consecrated.

On Dec. 11th, 1911 at 1:10am, a fire started at the Capital Decorating Company, one of the city’s most popular signage companies, at 125-45 Hayes St. (non-extant). The fire threatened to consume several blocks, including some on Fell Street. The San Francisco Call refers to the blaze as a “sheet of flames.” As it spread to Linden Alley, the fire destroyed several buildings in its path. The blaze was stopped at 121 Fell St. (non-extant). The Call reports that the fire caused $30,000 in property damage.

As rebuilding in Hayes Valley continued, the idea of constructing larger apartments began to take hold across the city. Smaller dwellings now seemed impractical and outdated. 150 Franklin is an example of the move towards larger luxury apartments full of modern amenities. 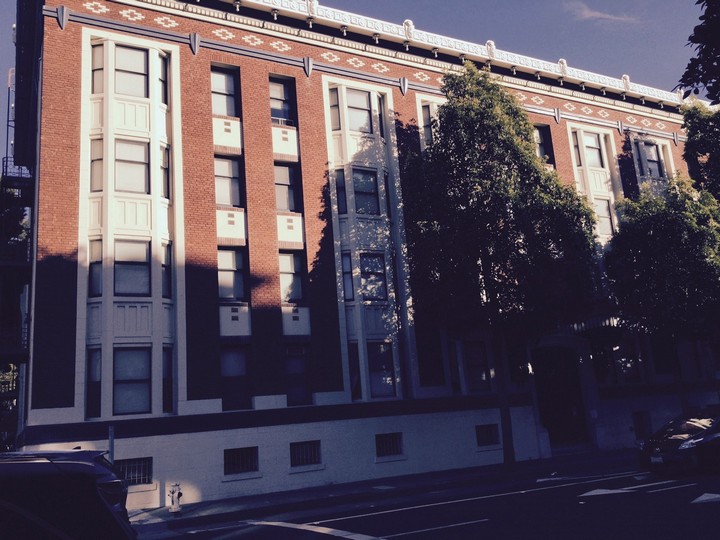 Built in 1912 for the Franklin Realty Company, constructed of steel and concrete with a brick exterior, the building had thirty 2-bedroom and eight 3-bedroom apartments. 150 Franklin was designed by the prolific architect August Nordin who designed more than 300 buildings in San Francisco, including the Swedish-American Hall.

John Wobbe, proprietor of a saloon at 299 Fell St. (non-extant), and his friend and erstwhile patron Howard Kelly, a sailmaker, seem to have been the subject of many intrigues at the Fell Street saloon Wobbe owned. One San Francisco Call article recounts how Wobbe’s snores had, "failed to scare off a burglar who managed to make off with the evening's cash."

This incident detailed in the San Francisco Call on June 16th, 1912 finds Wobbe and Kelly on the opposite side of the law.

At the end of a three-day memorial service in the saloon for Wobbe’s dog Steam, who had been killed by a streetcar, Wobbe and Kelly decided to give the dog a burial, “in military fashion,” said Wobbe. Once Steam had been laid to rest in a vacant lot next to the saloon at Fell and Gough streets, Wobbe drew his revolver and fired three shots into the air in Steam’s honor. Wobbe then gave Kelly the gun insisting that he too fire a shot. Kelly says he fired a shot, handed the gun back to Wobbe and ran from the scene. Policeman W.C. Gilmore gave chase taking the men into custody charging them with firing a gun within city limits. They were later released.

The Newton J. Tharp Commercial School, listed under the National Historic Preservation Act of 1966, moved to its current location at 170 Fell St. when the city decided to create a Civic Center Plaza for the Panama-Pacific International Exposition.

The disclosure of the school’s new location caused a storm of protests from associations and clubs in and around Hayes Valley. The Fell and Franklin street location was originally slated for a new library. According to the San Francisco Call on May 7th, 1913, the Hayes Valley Improvement Association announced that it was prepared to offer the city $617,000 to buy the land. The bid was not successful, and the school’s move was completed on May 14th, 1914. Unoccupied lots filled with debris and the hazard of speeding automobiles were major concerns to residents of Fell and Hayes streets in 1910.

The Central Mission, and Hayes Valley Improvement Clubs urged the city to install gaslights in and around the empty lots to deter crime. The club has also requested a police motorcycle squad to aid in catching lawbreakers. Dr. Magnus from the lighting committee of the Hayes Valley Improvement Club says he has started an aggressive campaign to have electroliers installed on Hayes and Fell streets as the district is too poorly lit.

As the Panama-Pacific International Exposition of 1915 approached, debris and empty lots continued to plague both Hayes Valley and Civic Center.

From the San Francisco Call February 1915:

The Civic Center Improvement Club has received commitments from empty lot owners that all debris will be removed from every empty lot in the neighborhood. Structural engineer and contractor James H. Hjul was one of the people who took advantage of the boom in land acquisition. Most of his industrial buildings were South of Market, but in 1915 Hjul built a building featuring 21 apartments with three to four rooms each at 225 Fell St.  Like 150 Franklin St., 225 Fell St. had modern amenities including an icebox in each apartment connected to a refrigeration system in the basement. There was also a trendy spacesaver in each unit, the Murphy bed. All the other buildings on the eastern end of Fell Street constructed in or by the early 1900s are now gone. The apartment buildings at the Gough Street end of the block—250 Fell, 265 Fell, and 298 Gough— were all built in the 1920s.

The Church of the Advent continues its work in the community including feeding the homeless and indigent through their Deacon’s Fare on civic holidays. Lunches are prepared and served by volunteers. The Church also offers Third Sunday Concerts from January through September.

Though the edifice of the Church of the Nativity of Our Lord was changed over the years to the one we see today, the rectory on Linden Street remains intact from its 1912 construction.

In 1994, Church of the Nativity was ordered closed by Archbishop John J. Quinn along with nine other Catholic churches across the city. Undeterred, parishioners held prayer vigils in front of the closed church each Sunday for two and a half years until in 1996 the church was allowed to reopen. 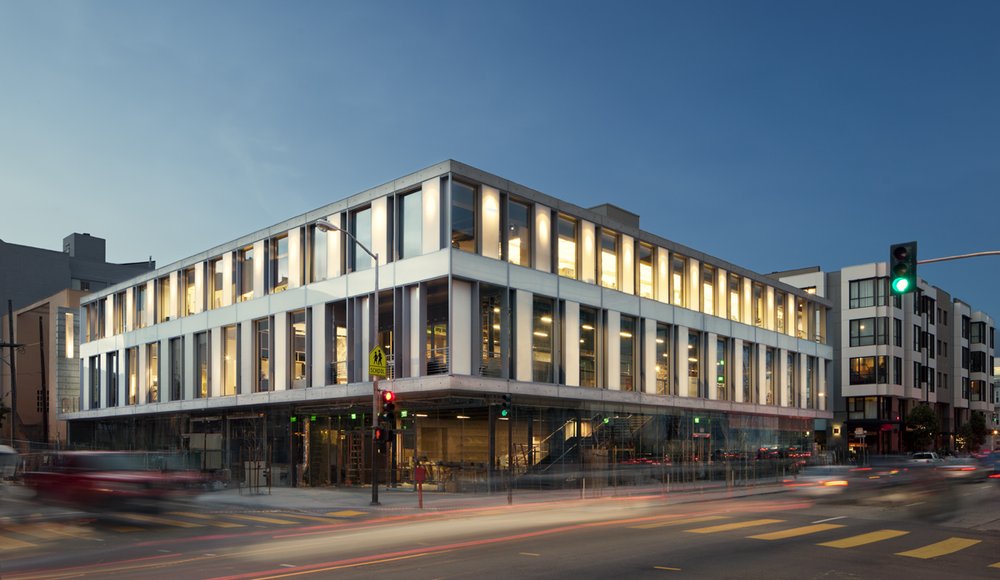 Finally, the SFJAZZ Center at Fell and Franklin, designed by the award-winning architectural firm of Mark Cavagnero Associates, opened in 2013. The Center is the first concert hall of its type in the United States. Like much of the rest of the block, San Francisco Jazz is rooted in its history, with an eye towards the future.