As we reported yesterday, the new North American Soccer League has proposed to make Kezar Stadium the home field for its first West Coast professional team, the San Francisco Deltas.

If the proposal is approved by San Francisco Recreation and Parks, the Deltas would host 15-20 home games at Kezar Stadium, beginning in 2017. The games would mostly take place on Saturday evenings, with the occasional game on Wednesday evening or during the day on Saturday.

Representatives for the Deltas shared more details on their plans at a recent meeting of the Inner Sunset Park Neighbors. Though the team's owner, Brian Andrés Helmick, was unable to attend due to an NASL event on the East Coast, director of stadium operations Alexis Haselberger and PR representative Sam Lauter were on-site to talk to neighbors. Both of them live within walking distance of Kezar, and made the case that they'll also be affected by any changes.

As predicted, the two major topics of concern expressed by neighbors were the league's request to sell alcohol during games, and how thousands of soccer fans coming to the games might impact traffic and parking issues in the neighborhood. 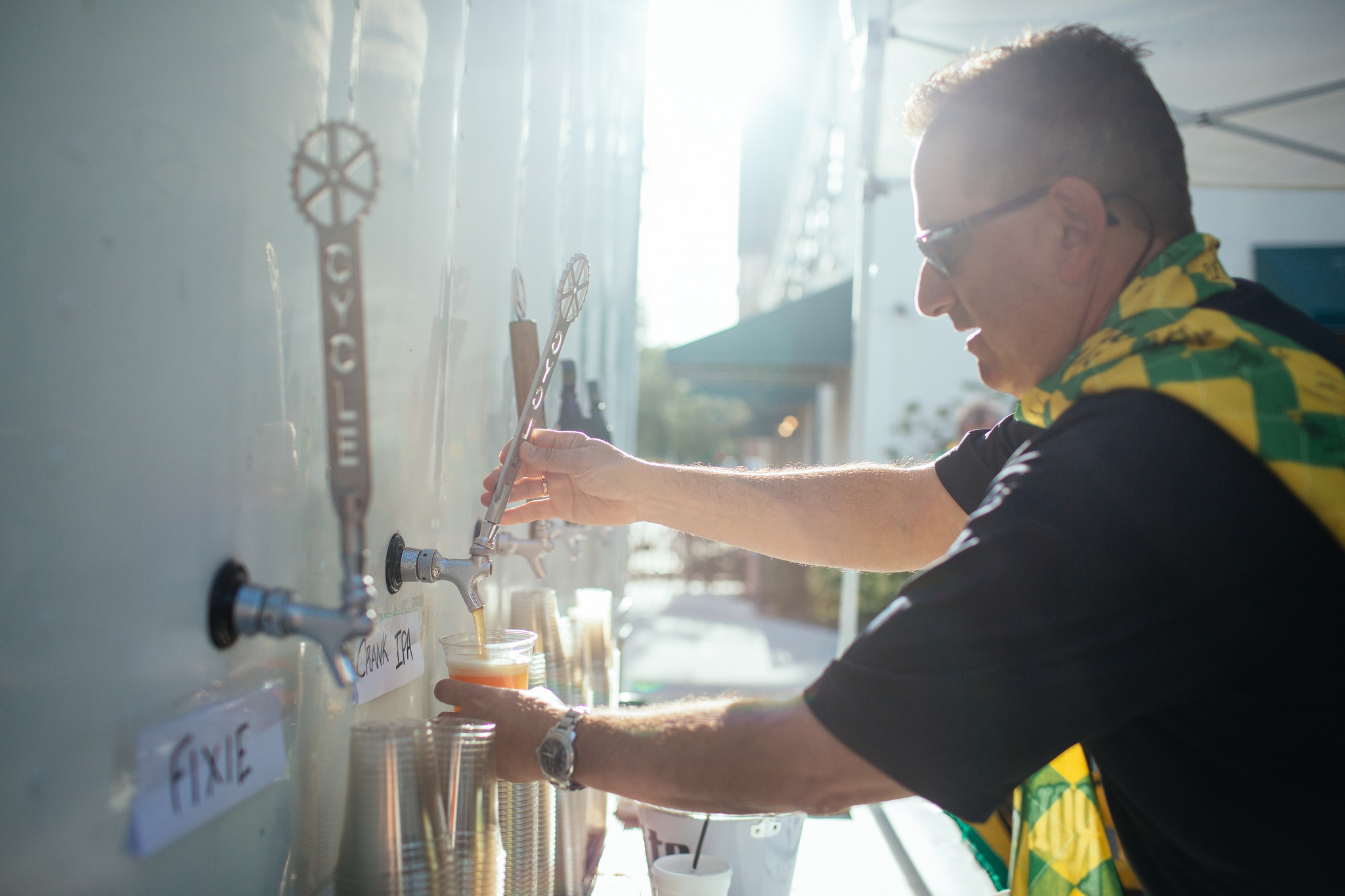 Under the Deltas' proposal, beer and wine would be available for purchase at games by any attendee of legal age, with any type of ticket. Additionally, fans with higher-priced tickets would be able to purchase hard alcohol, as part of an enhanced game experience. Higher-priced premium tickets are part of the Deltas' strategy to keep the rest of the tickets affordable, Haselberger and Lauter explained.

Some neighbors expressed strong concern that selling alcohol at the games would bring more noise and violence to the neighborhood, pointing out that alcohol had been almost entirely banned from Kezar events for the past quarter-century.

"I am definitely not opposed to professional soccer in Kezar Stadium," Eileen Auerbach, who has lived across the street from the stadium for 37 years with her husband Larry Burgheimer, told Hoodline. "The big issue for me is selling liquor in the Stadium. That is the condition that can create chaos during and after the games, in my opinion."

"The way it is right now, if someone is misbehaving, bringing in bikes or pets, throwing garbage around, skateboarding, breaking branches off the trees, or whatever, it’s possible to talk to them and ask them to stop," Auerbach continued. "But when people have been drinking heavily, the equation changes, and the response can become very aggressive and dangerous. We have seen this kind of acting out turn violent at AT&T Park after ball games, and it's clearly the liquor that sets off the aggression." 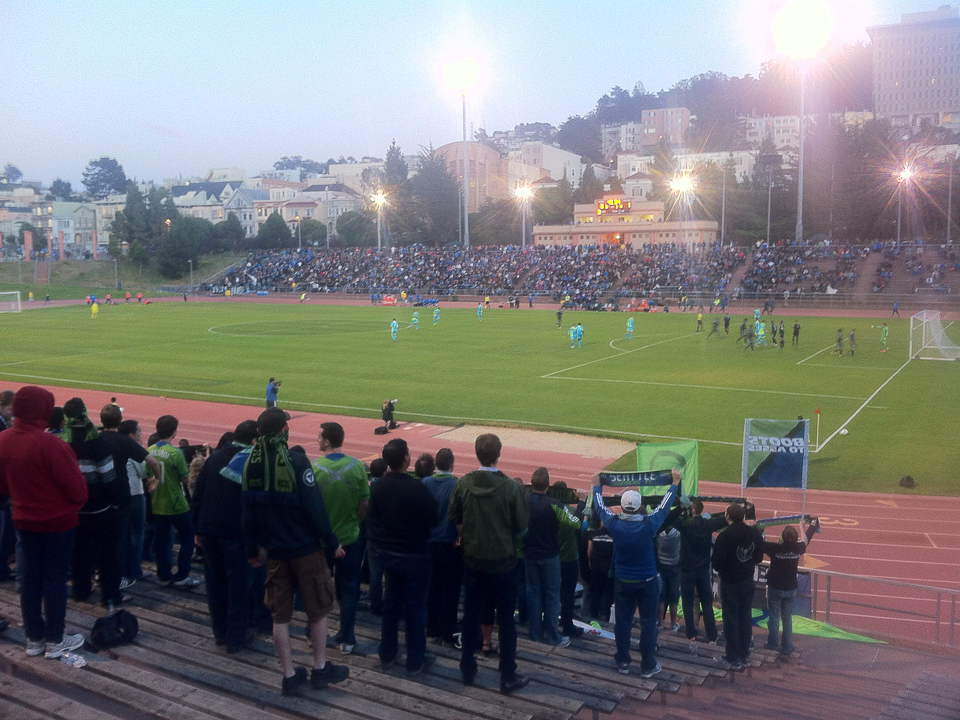 Not everyone at the meeting was completely opposed to alcohol sales. One resident voiced approval for beer and wine sales, but thought that selling hard alcohol to premium ticket holders was going too far.

"One of the things to remember is that soccer moves really fast. People are in and out of the stadium in two hours—there is only so much beer that can be consumed in this time," Jonathan Skinner, an Inner Sunset resident who has attended soccer games at stadiums around the world, wrote on NextDoor. "I'd much rather see regulated drinking while people sit and watch a soccer game than the unregulated drug use five minutes away at Stanyan."

Another big topic of concern was the impact that the games—and resulting crowds—would have on the already crowded nearby streets. One neighbor who lives on 2nd Avenue, near the Stadium, complained that her driveway gets blocked by illegal parkers when there are events in the park, and she fears that the games would only worsen the situation. She also expressed concern that the streets directly around the stadium, including Kezar Drive and Frederick Street, would not be able to handle the additional traffic.

The team's response to the issue was clear: "We are going to do whatever we can to encourage people to not drive to the games." The details, however, are still a work in progress. Some of the proposed ideas include asking Muni to run additional buses before and after Delta games, partnering with ride-sharing and/or taxi companies to offer promotions, and providing secure bike storage.

Haselberger and Lauter said these arrangements had not yet been finalized. They also had no confirmed parking plan for those who did drive; some ideas included using a valet service, or renting parking lots elsewhere in the park and providing shuttles to the stadium. They told the crowd that issues of traffic and parking would be one of their top priorities in the year leading up to the Deltas' opening season. 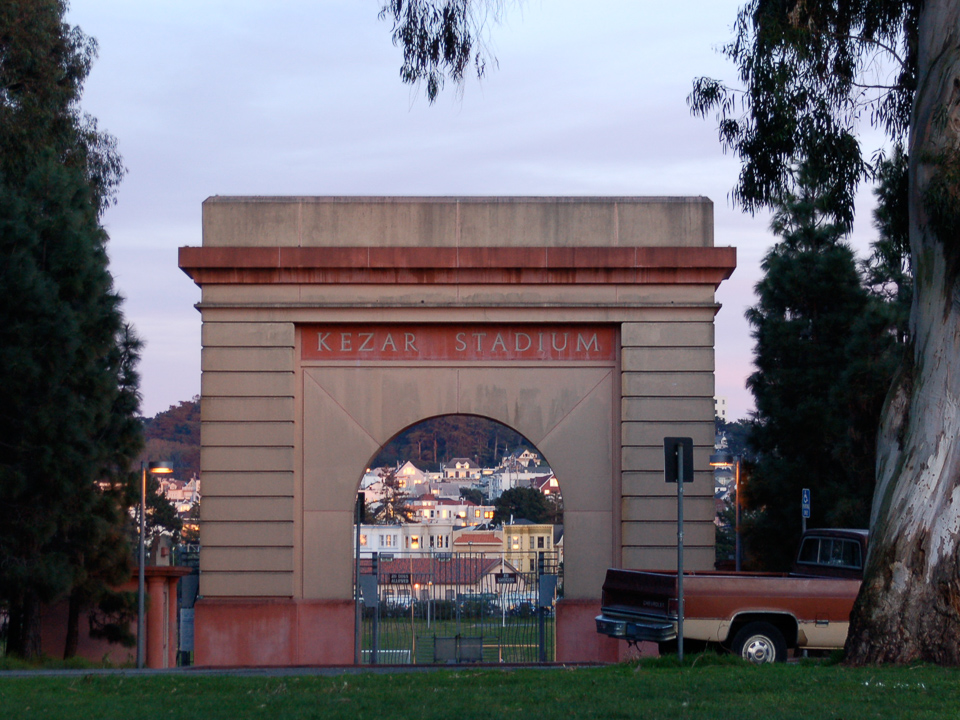 Danny Dawson, who lives near the stadium, pointed out in a NextDoor post that Kezar already hosts a number of events, and that the neighborhood seemed to be able to handle them. "I live a block from the stadium, so I am a little concerned about large waves of people, but I'm not sure it'll be all that different from the concerts that happen at Sharon Meadow or the high school homecoming games often hosted at Kezar," he wrote.

Some residents were concerned that the Deltas' presence would preclude those events, as well as other uses of the stadium by the public. Haselberger and Lauter reassured the crowd that only ticketed games would take place at Kezar Stadium; all of the Deltas' practices would be held at Boxer Stadium at Balboa Park.

The team said it's worked with the San Francisco Unified School District to ensure there are no scheduling conflicts. Because the soccer games are mostly to take place on Saturday evenings during the summer, the SFUSD did not see a problem, Haselberger and Lauter said. Lauter added that they'd also gotten approval from local track and running groups. 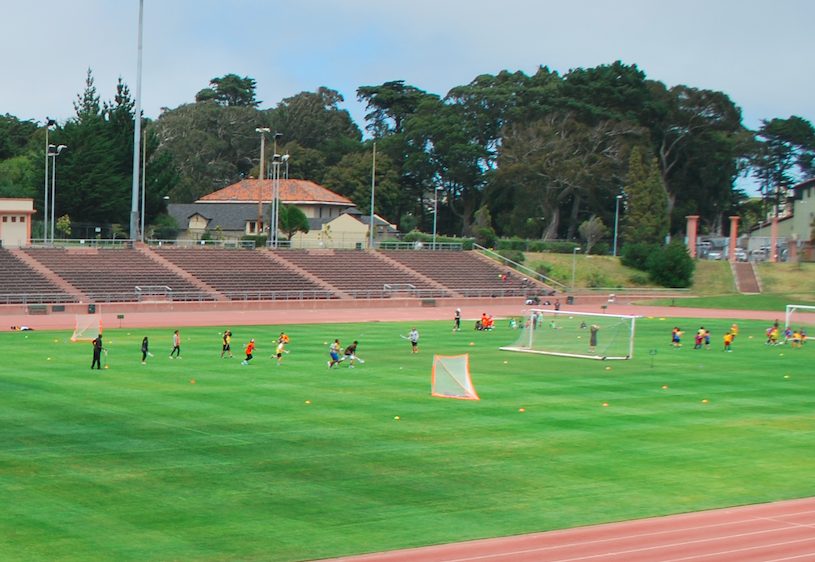 The Deltas say they will spend $800,000 on capital improvements to the stadium, with the outlay being recouped over the years as rent credits. The money would go toward ADA compliance, locker room and bathroom upgrades, and seating improvements. A new lighting and sound system, specifically designed to keep light and noise from spilling into the surrounding neighborhoods as much as possible, is also part of the plan.

One fun improvement: as part of redoing the tunnel that connects the locker room to the field, the Deltas are talking with Rec and Park about displaying some memorabilia, currently boxed up in storage, from the now-demolished Candlestick Park.

The Deltas also stressed that making game tickets affordable was a top concern. They're committing to offer 3,000 tickets per game at $20 or less, adjusted over time for inflation. (For context, average NASL game attendance is about 5,900.) At least 100 tickets per game would be given away to youth groups and nonprofits.

In order to subsidize these low-cost and free tickets, some premium tickets with special perks (like the aforementioned hard alcohol) would be offered, which made at least one neighbor uncomfortable. "I don't like to hear that elite and exclusive experiences available only to the wealthy are coming to our neighborhood," the neighbor said. 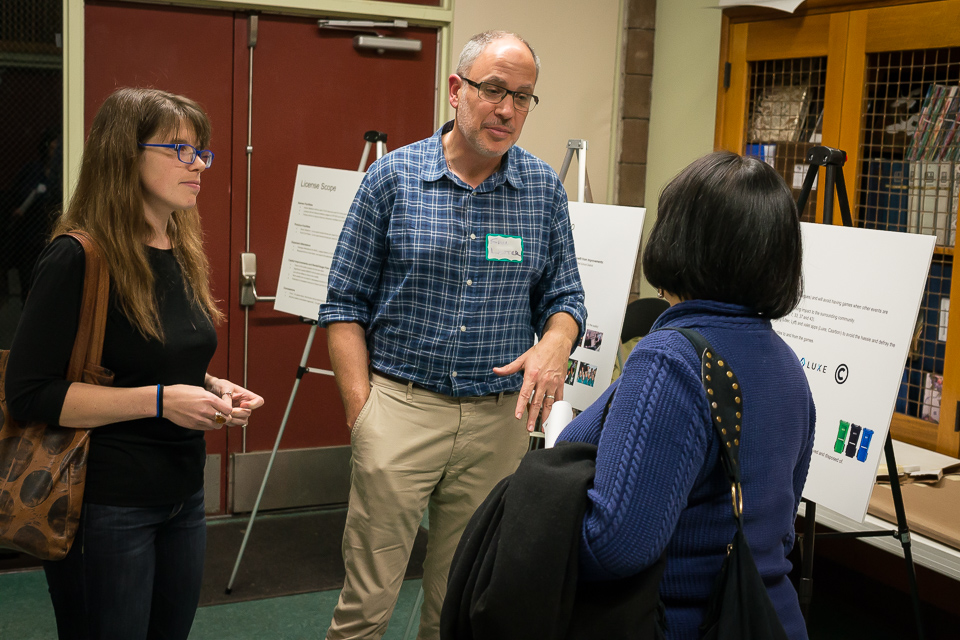 While many neighbors at the meeting seemed pleased with what the team's representatives had to say, it was clear that for some, the issue was not over. Burgheimer, who has been on the Kezar Stadium Advisory Committee for 30 years and lived across the street even longer, was collecting contact information for those who were interested in opposing the plan.

Though he can tell tales of Turkey Day games back when the old Kezar Stadium could hold over 50,000 fans, Burgheimer now believes Kezar (which was downsized to a capacity of 10,000 in 1989) should cap out at about 2,000-3,000 attendees. "Once you get past that, and especially once you pass 5,000 attendees, there are significant impacts to the neighborhood that will be hard or impossible for them to solve."

"[The Deltas are] going to come up with the best plan that we can ahead of time, but we expect that there will have to be adjustments once the games begin," said Haselberger. "The neighbors are our best resource for figuring out what works and what doesn't."

The Deltas' proposal could be headed to Rec and Parks for potential approval as early as next month. We'll keep you posted on the latest.