Coyotes, Skunks & Raccoons: How To Cope With Wild Neighbors

Greater Sunset and Cole Valley residents who live near Golden Gate Park and Mt. Sutro Open Space Preserve know the area is home to a sizable wildlife population, which has only grown in recent years thanks to environmental regulations.

But now that it's prime mating season, many have taken to social media in recent weeks to report unexpected face-to-snout encounters with three members of the city's wild kingdom: coyotes, skunks, and raccoons.

Most of these late-night meetings resulted in an entertaining story or a grainy smartphone video, but on Saturday night, one Facebook user called 911 after a skunk sprayed his dog. So here are some tips on the best way to behave around these creatures, to preserve your safety (and theirs).

Since they're the second-highest mammal on San Francisco's food chain, it's natural that bumping into a coyote is a startling experience for many locals. In 2014, the Department of Recreation and Parks estimated that there were about 100 Canis latrans living in the City, mostly in the Presidio and Golden Gate Park. Their numbers are likely higher today, as these highly adaptable predators can bear a litter of three to nine puppies each year.

Last month, coyotes were spotted in Golden Gate Park, Cole Valley and Corona Heights, while a solo bachelor lives on Telegraph Hill. Just after midnight this past Saturday, we saw one trotting near Carl & Stanyan, where several residents were still walking dogs or returning from an evening out. None of the recent sightings have ended in violence, but last fall, two dogs at Stern Grove were attacked by coyotes, one fatally. 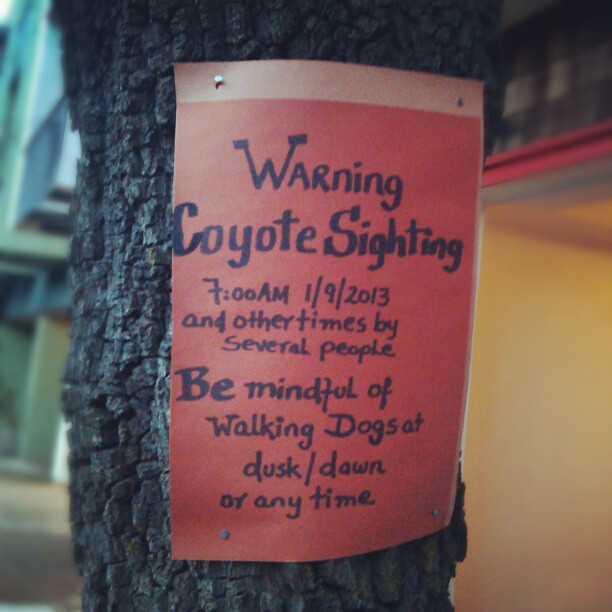 Coyotes on residential streets may be searching for food, but experts also note that the animals can wander outside of their usual haunts during mating season, which is January and February for California coyotes. Most coyote pups are born in April and May, but only five to 20 percent survive their first year.

Although you might be more likely to see coyotes now, attacks are more likely to occur between April and August, when adults are protecting their newborn pups. To protect pets from coyotes, always keep dogs on a leash, and don't permit cats to roam outdoors. (A survey in Malibu once found that 13.6 percent of coyote droppings contained cat DNA.)

If you encounter a coyote, shouting, tossing sticks and stones, and/or waving your arms will likely encourage the animal to leave. Never turn your back or run from a coyote; instead, back away slowly. If you do encounter a coyote, help the city keep tabs on them by contacting Animal Care & Control by email at ACC [AT] sfgov [DOT] org or call 415-554-6364. 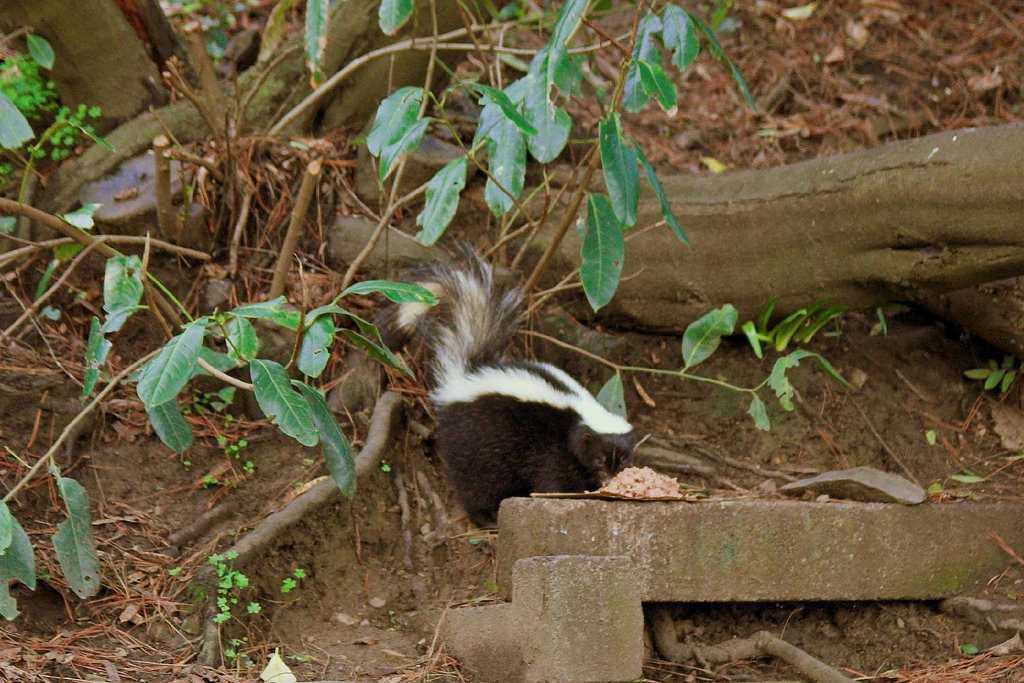 Around Valentine's Day, love is in the air, as are the powerfully funky chemicals skunks use to ward off perceived threats. In the last week, we've smelled the striped nocturnal rodents creatures making their mark on Carl Street in Cole Valley and near Kezar Stadium. (Humans are so sensitive to the odor of skunk butt that we can detect the scent at concentrations of 10 parts per billion.)

Skunks only spray to protect themselves or their offspring, but they're also terribly nearsighted, which makes them prime targets for late-night drivers. Male skunks, in particular, can travel as far as five miles in a night in search of food and companionship. It's unlikely that you'll literally bump into one on the street, but they do take shelter in crawlspaces and sheds during the winter, which raises the odds of an unwelcome surprise. To get rid of the smell, forget tomato juice: use a blend of dish soap, hydrogen peroxide and baking soda.

As terrible as a skunk's odor is, its bite can be worse. Rabid skunks can easily transmit the disease to humans and pets through scratches and saliva.  Call Animal Care & Control if you see a skunk when the sun is out, as daytime activity may be a sign of rabies infection.

Very few predators are willing to take on skunks. Fortunately, the great horned owl, which also inhabits our area, is one of them. 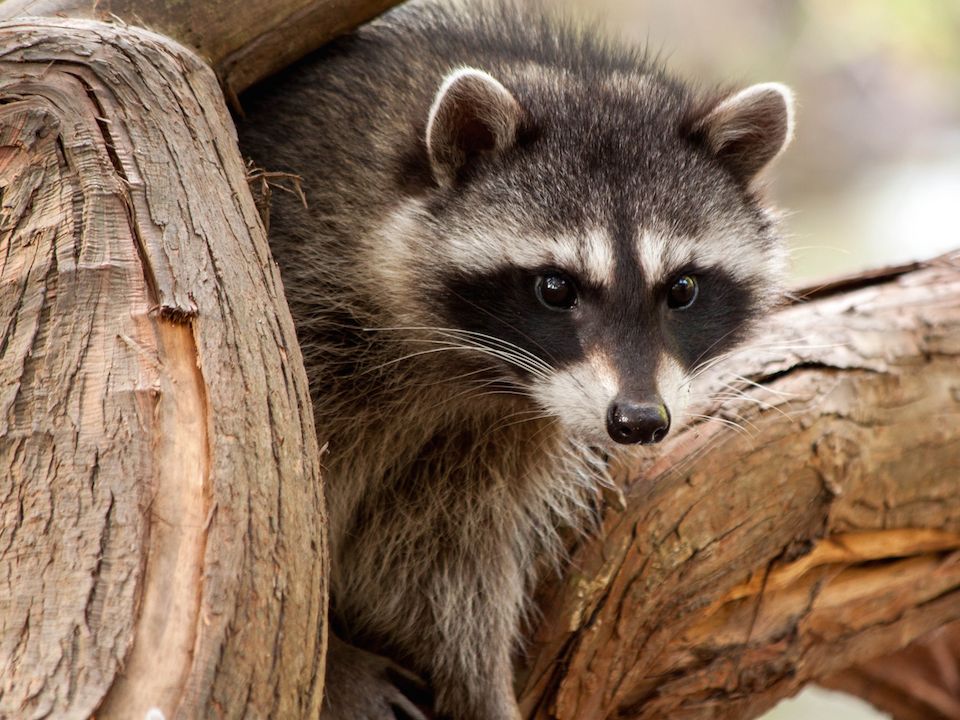 With their bandit's masks and highly dextrous hands, it's easy to anthropomorphize raccoons. But while they're adorable, they also present multiple dangers to people and pets. Although they rarely attack, raccoons are more likely than any other animal to carry the rabies virus, as well as diseases like roundworm and leptospirosis, which can affect both humans and animals.

Unless they're sick or cornered, raccoons aren't generally confrontational—because they live in such close quarters with people, they've become acclimated to human behavior. But if a raccoon perceives a threat, it can easily kill or injure a pet, so beware.

Aside from humans, raccoons only have one natural predator in San Francisco: coyotes. For people who believe traps are cruel, there are a number of raccoon repellents on the market, several of which purport to include coyote urine or ultrasonic frequencies.

Apart from the fact that coyotes, skunks and raccoons are all currently in search of sexual healing, they also share another important trait: they're all scavengers. That means the most effective way to reduce the odds of an encounter is to stop inadvertently feeding them. Secure trash and recycling bins with bungee cords, and put screens over vents and chimneys to keep out unwanted visitors.

If you have outdoor pets, get them vaccinated for rabies, roundworm and leptospirosis. Never keep dog or cat food outside, and dump out water bowls at night to discourage thirsty visitors.

Common sense can reduce the odds of an unwanted encounter, but if an animal takes up residence in your home or exhibits signs of illness or injury, it's best to call Animal Care & Control.