Photo by Joshua Wilking on Unsplash
By Laila Weir - Published on May 20, 2021.
San Jose

It's hiking season, and in many areas around the Bay Area that can mean running into coyotes, especially if you're walking with dogs. Here's a rundown of what to do (and what not to do) if you encounter a coyote.

To start with, remember that when humans (and our four-legged friends) walk in nature areas, we're in habitat shared with all kinds of wildlife, including coyotes. It's their home, too, and seeing them roaming around is normal — including in daytime, even though they're mostly nocturnal. If they're not causing a problem, simply avoid them. (Never approach or try to feed them.)

Video of a coyote in Wildcat Canyon in the East Bay Area Video: Laila Weir

That said, most interactions with coyotes in urban areas result from the presence of a dog or food, according to the nonprofit Project Coyote. And with drought conditions inevitably making both food and water harder to find, accounts of people seeing coyotes tend to proliferate (like a recent one in the Mountain View Voice).

Coyote attacks on pets are rare, and coyote attacks on people are even rarer. Statistically speaking, you're more likely to be killed by an errant golf ball or flying champagne cork than bitten by a coyote, according to the Humane Society.

A few simple measures can both help keep you and your pets safe and protect wild coyotes from getting into trouble. Here are some tips compiled from the Humane Society, Project Coyote, and the Urban Coyote Research Project. 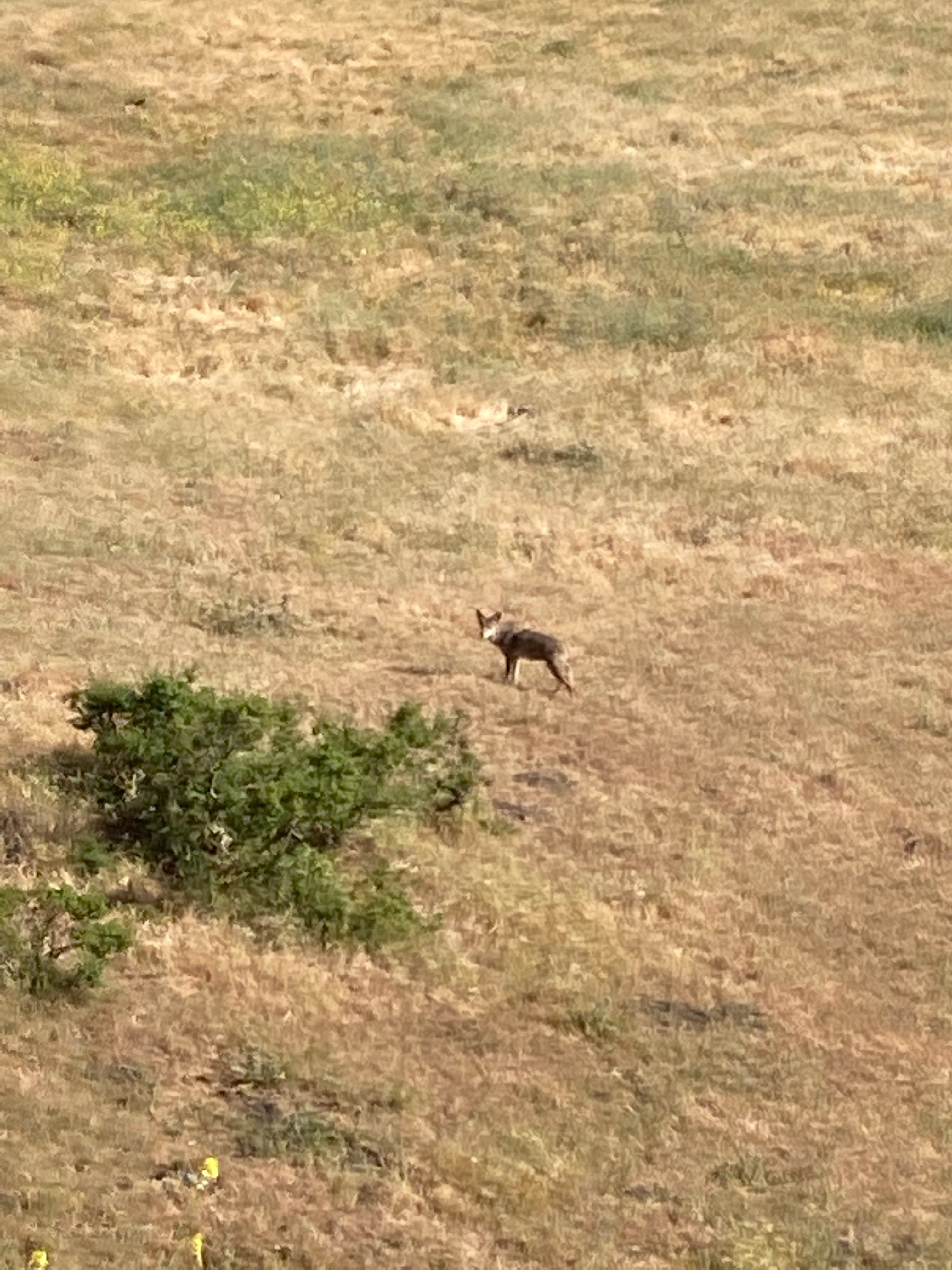 Do not feed coyotes. Feeding wildlife can cause them to lose their fear of humans, which has the potential to lead to eventual aggressive behavior. It may be tempting to try to leave food for wildlife, especially during a drought, but teaching them to associate humans with food (or water) doesn't do them any favors in the long run and can be dangerous for pets and even children. In many cases when humans have bitten, they were actually feeding the coyote. Don't offer them food or water, or leave any for them.

Avoid coyotes. If you see a coyote during the daytime, it may have become habituated to humans and no longer be afraid. If it doesn't leave when you approach, especially in May, it may be protecting a den. If possible, simply alter your route to avoid the area. Never corner a coyote.

Don't let dogs (or kids, for that matter) chase or play with coyotes. While naturally timid, coyotes can also be curious and playful (much like dogs) and may also try to scare dogs away from dens, mates or sources of water and food. If you think you may encounter coyotes, keep your dog and small children closer than usual. If you see one, keep small kids close or pick them up, leash dogs or pick up small dogs.

Don't run away from a coyote. If you're approached by a coyote, make and keep eye contact with the animal, leash any dogs or pick up smaller dogs, and make some noise. Yell, wave your arms, throw something at the coyote to get it to go away. If it doesn't, leave calmly.

Report aggressive or extremely fearless coyotes. Agitated and unprovoked barking, raised hackles, snarling, growling and lunging are all signs of aggression in a coyote. In the unlikely event you experience such behavior from a wild animal, contact your town's animal control service.

The Bay Area is home to all kinds of exciting sports venues, but it appears it’s about to get one type that it's never had before.

It appears the often-overlooked city of Menlo Park is about to get a new dining destination, and it is sure to attract interest from foodies in Silicon Valley.

A secret South Bay hideaway that pays tribute to Captain Hook, Blackbeard, and all the other famous pirates is about to get unearthed like a treasure chest and revealed to the entire world thanks to the National Geographic Television Series "The World According to Jeff Goldblum" on Disney+.

As BART’s vision for two new stations in San Jose gets closer to a reality, another new housing development near one of the stations has been proposed and is now in the early stages with city planners.