The Castro's fine-dining gem Frances (3870 17th St.) reopens Thursday night (June 23), after a months-long remodel, and after remaining mostly dark since March 2020. But longtime fans will notice a major difference with the revamped Frances: no more a la carte menu.

Chef Melissa Perello reopened her other restaurant, Octavia (1701 Octavia St.), a full year ago, but the road to getting Frances back open has been more delayed. In September 2021, Perello launched a pop-up dinner series at Frances that reactivated the kitchen for a couple of months and made use of some newly built parklets on 17th and Pond streets. The format of those dinners — with a menu changing each week, served family-style over four courses, inspired by the farmers' market and seasons — has inspired the new format at Frances.

Wednesday to Saturday, the restaurant will be offering just the single set menu going forward, with the first weekend's offering being an $86 per person prix fixe. See the full menu for June 23-25 below. The next week's menu will likely be entirely or partially different, and Perello will be working with new Chef de Cuisine Jordan Wittrock to create the menus. 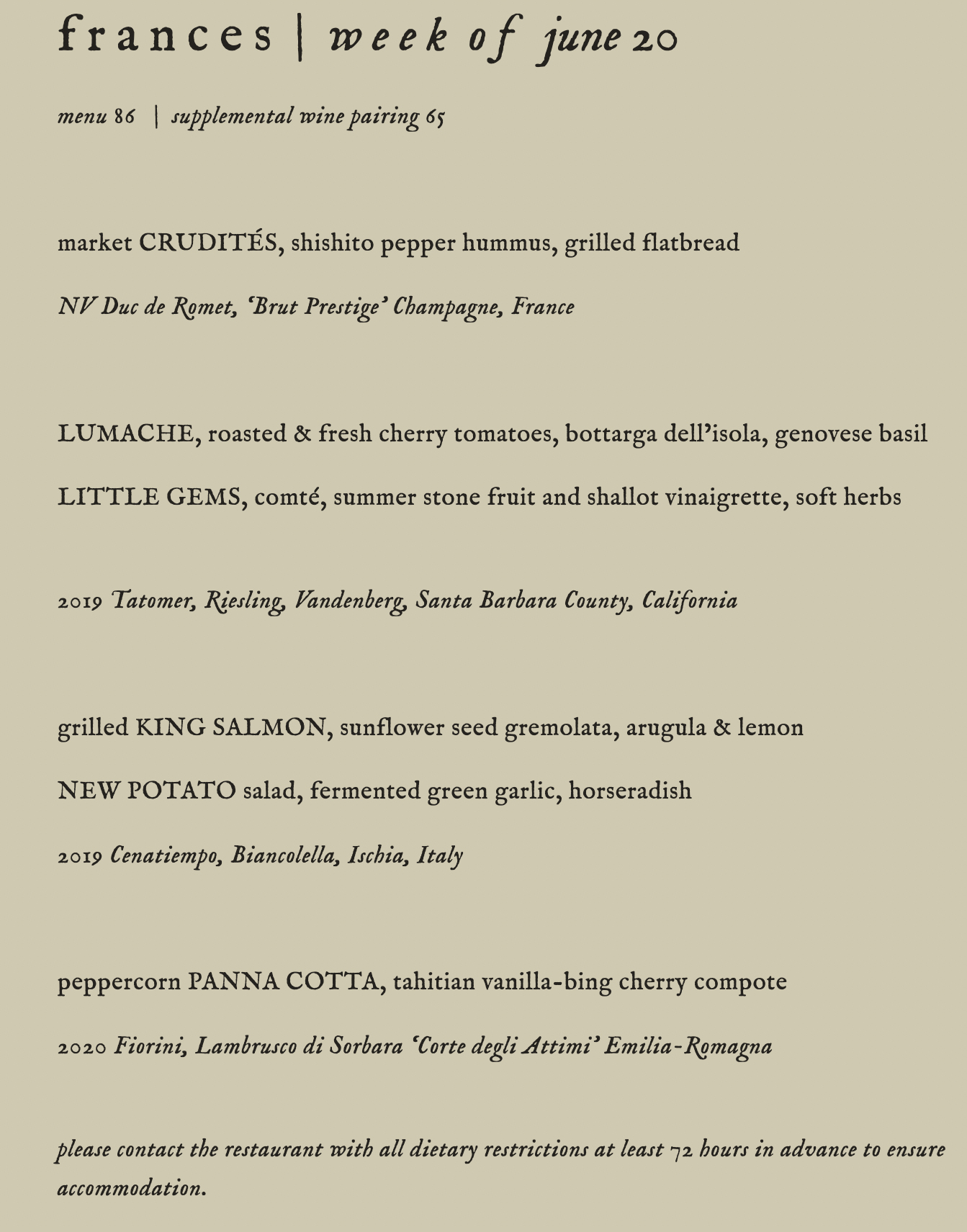 As noted at the bottom of the menu, diners with dietary restrictions can only be accommodated if they provide the kitchen with 72 hours advance notice — otherwise there is just the one menu, no substitutions.

Frances opened in December 2009 after Perello had already worked in some high-profile SF kitchens, including at the acclaimed Fifth Floor, and Charles Nob Hill. The restaurant was an immediate success, lauded both for Perello's food and a wine program that offered pay-as-you-go wine pours that started at $1 per ounce. One perennial menu item, that may or may not make a future appearance, Perello's bacon beignets, are nowhere to be seen on the new menu.

The new wine program is being overseen by Wine Director and certified sommelier Iris Rowlee, with a main list, nightly pairings, as well as an off-menu reserve bottle list.

Perello has earned Michelin stars at three restaurants in her career, Fifth Floor, Frances, and Octavia.