Checking In With Proposition Chicken (Now Serving Beer And Wine)

Photo: Jared Schwartz/Hoodline
By Jared Schwartz - Published on June 30, 2014.
San FranciscoHayes Valley
Proposition Chicken, a restaurant on Market Street that first opened last October, has added something new to their menu: a full selection of beer and wine.
With a menu that's centered around ordering chicken in one of three ways (fried, flipped, or fake) and choosing how it's presented in one of three ways (sandwich, salad, or entree), adding beer and wine has been a goal for the team since January.
Ari Feingold, owner of Proposition Chicken and another Hayes Valley restaurant, Straw, worked with Elizabeth Wells, owner of Southpaw BBQ and Southern Cooking, to select a wide range of beer offerings.
The team is offering one red, one white, and one sparkling wine along with 12 types of beer. Whether you're craving 21st Amendment or a PBR tall boy, Proposition Chicken likely has something for you. You can check out the selection in the photo below or by checking out their menu. 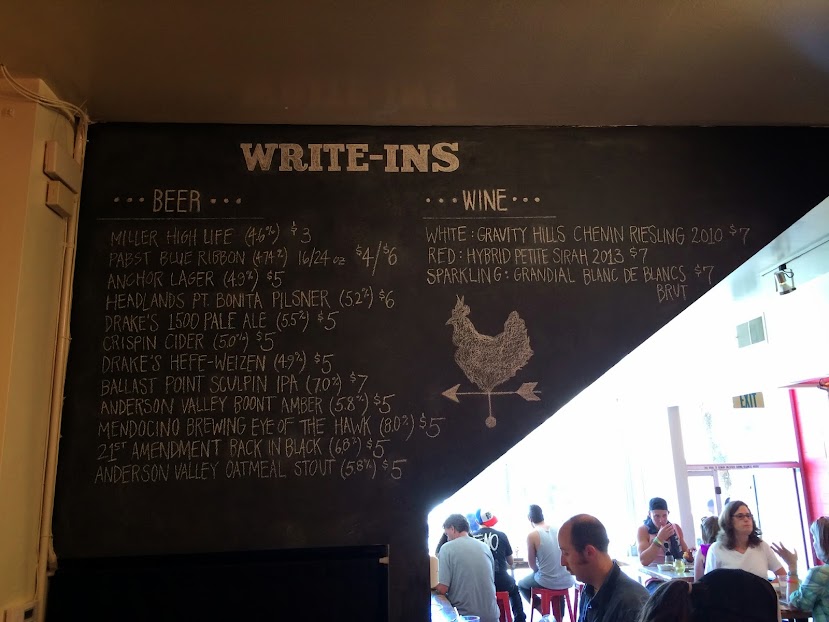 When we spoke to Ari, he shared a little more about how things have been going in the past nine months since opening day.
"The best part (of opening Proposition Chicken) is that since the menu is so simple we were able to use the highest quality ingredients" he said. "(We) order them daily and make everything from scratch. The most challenging thing has been the fact that with all of the construction around the restaurant, there is very little parking so customers cannot pop in for a quick bite so easily."
Despite the ongoing construction, Ari thinks the location situated between three different neighborhoods is exactly where he wants to be.
"Love the location and in it for the long term" he said. "Nestled between the Mission, Castro, and Hayes Valley, I think this neighborhood is beginning to take on its own identity and it is a cool thing to watch develop and to also hopefully be a part of."
The restaurant was originally planning on staying open until 2am on Fridays and Saturdays, but Ari told us they decided to focus on making things solid during lunch and dinner before rolling out late hours.
Along with the new addition of beer and wine, the restaurant also looks to feature outdoor seating on Market Street in the near future. For now, they're open every day from 11am-9pm, across the street from Martuni's and a few steps away from the new 8 Octavia building.
San FranciscoHayes Valley
About 20 hours ago