Alouis Auto Radiator To Be Turned Into Condos, Retail Space

Renderings: Forum Design
By Nuala Sawyer - Published on July 16, 2014.
San FranciscoDivisaderoAlamo SquareNoPa
As we suspected back in October, big changes are coming to the Alouis Auto Radiator building at 650 Divisadero.  The building, which was built in 1922 and displays the signature terracotta tiles and stucco walls of Mission Revival style architecture, has been a family-owned auto shop since 1952.
In May of 2012, the space was purchased by Webco Group LLC for $3.38 million. Developers have since been sitting quietly on plans, but nearby residents were notified of plans to transform the space by letter earlier this week.
Architect Warner H. Schmalz from Forum Design (whose work you may recognize with buildings such as 1600 Market Street and 1 Franklin Street) has been assigned to the project, and shared renderings of the planned changes at a neighborhood meeting held at Mojo last night. 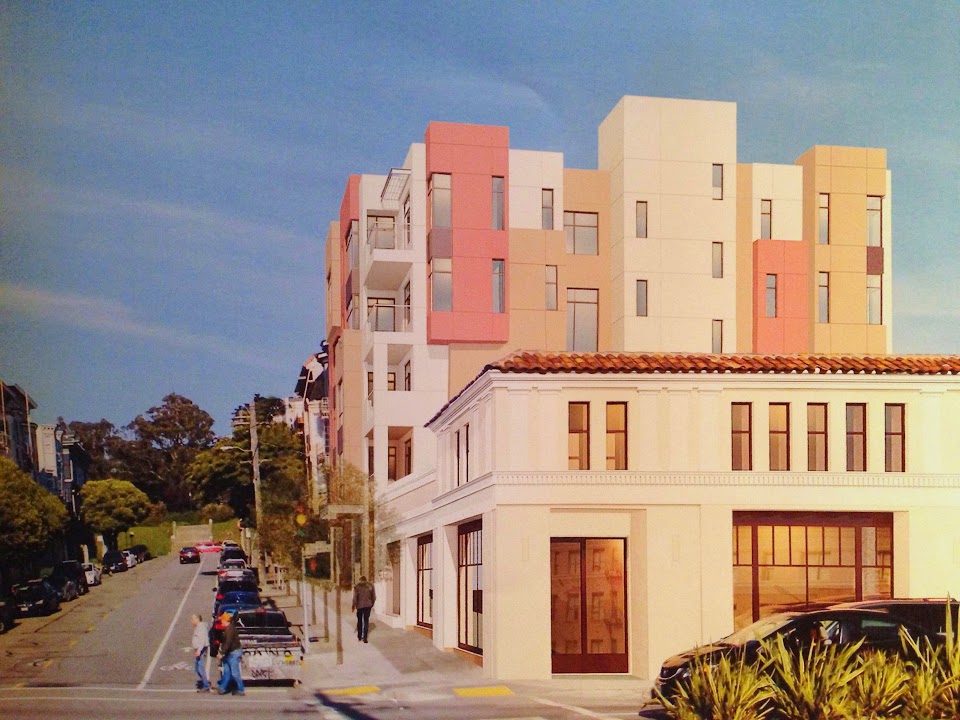 Although it's not flagged for historic preservation,  Schmalz dug up original images of what Alouis looked like in the 30 years of its existence before it became an auto shop, and will be referencing those plans during the renovation.
Forum Design's plan will retain the front half of the Alouis space. The aesthetics of the 1920s exterior will be preserved, though it's slated to be broken down into three retail or restaurant spaces, all with entrances on Divisadero Street. The most obvious change will be large retail-style windows to replace the current garage doors.
The back half of the building will be demolished and turned into a 5-story, 16 unit condo building. Of these, 12 will be 2+ bedroom units, ranging from 1,000-4,000 square feet. The remaining four will be 1-bedroom apartments averaging 900 square feet. Though the height limit for this type of building is 65 feet, the plan proposes a more modest 55-foot height from the street.
Underneath the five stories of apartments will be a parking garage with 16 car parking spots to accommodate vehicles for residents. There will also be bike parking and space for scooters. The top floor above the storefront spaces is earmarked for office space.
Many voiced concerns over the plans at last night's meeting, which was set up to introduce the changes to the neighborhood.
Some residents are concerned about the skyline view of Divisadero. One raised the issue of how years of accumulated auto shop pollution and potential soil leakage will be handled. Others are not fans of the architecture. The owners and residents of the building next door on Grove Street are especially distressed, as the new building will dwarf their own and could obscure the view from their west-facing windows.
Christian Routzen from San Franpsycho raised the question of what the retail spaces would become, noting that while Divisadero has great foot traffic at night, what they really need is more daytime retail spaces.
The biggest concern voiced from Divisadero merchants, however, came from The Independent, which has been operating as a music venue for over 60 years. It's not uncommon to hear shows booming from the venue's walls as you stroll down the street, and the design of the new building has bedrooms located at the rear (just 55 feet from The Independent), as well as patios that will be open to the venue's back garden.
The Independent's concerns harken back to the drama that Slim's faced back in 2011, when a local resident complained about noise, costing the venue over $250k in legal fees and resulting in the temporary loss of their liquor license. Similarly, Brick & Mortar Music Hall struggled with neighbor and noise issues that came to a head in 2013, when they installed $50k worth of additional soundproofing to settle the problem.
With a history of music venues and neighbors clashing, it's no wonder The Independent is concerned. According to Schmalz, the plan is to soundproof the new building based on city standards, though he was vague about whether residents will be required to sign anything acknowledging that they're moving in next to a music venue.
Plans for the new building have been submitted for environmental review, after which they'll go to the Planning Department. The developers are hoping to start construction in late 2014 or early 2015, and they're estimating that the whole project will take 18-24 months to complete, which means the finished building could land on Grove and Divisadero in late 2016 or early 2017.
San FranciscoDivisaderoAlamo SquareNoPa
Jul 01, 2022