History Of The Upper Haight: Achilles Heel, The Fern Bar

Photo: Camden Avery/Hoodline
By Camden Avery - Published on September 13, 2014.
San FranciscoUpper Haight
Today we all know and love 1601 Haight Street, at the corner of Clayton, as the punch bar Hobson's Choice. But the space has an interesting past.
In 1980, the  Hobson's Choice building was owned by William Sapatis, a San Francisco lawyer and landlord. In 1979 and 1980, Sapatis applied to the city for a liquor license to turn 1601 Haight from its former use as a barber shop into a bar.
The reason? He wanted a straight bar.
In fact, Sepatis was the feature of a January 16, 1980 article by the San Francisco Examiner, called "The straights want rights: their own bar," in which he was quoted, in a caption under a photograph of him posing with a pipe and virile mustache, as saying, "They don't like me ... and they can go to hell."
The article reports on Sepatis' push for a straight bar (which he wanted to call Achilles Heel) in the Haight, even though the ABC's initial ruling declared that with 33 bars and liquor stores already in a 1,000 foot radius, the Haight had too many watering holes as it was.
This is a picture of the space as Delaney's barber shop in 1974 (photo via SFPL): 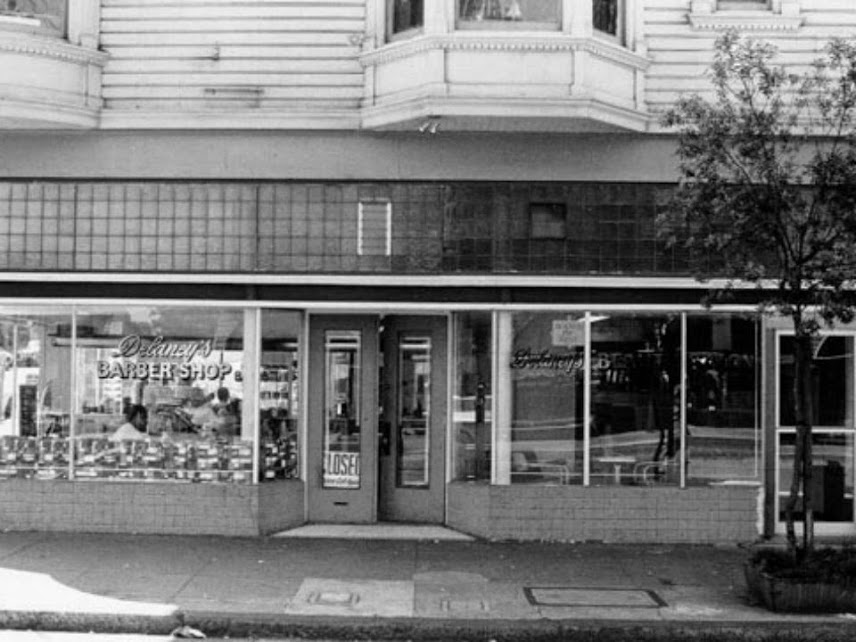 In the late 1970s and into 1980, the Haight was still a haven for its immediate black and gay communities. According to the Examiner's coverage and Sepatis' arguments, the existing bars weren't serving the community at large, meaning they were either too gay or "sleazy" for general use.
Achilles' Heel, he said, according to the legal record of his appeal to the ABC's decision, "will appeal to all segments of the community including many residents and business people in the area who are presently reluctant to enter other bars in the vicinity."
So, what was Sepatis's vision for this straight haven in the Haight?
A fern bar. Quoth the legal record:

In the hearing conducted by the Department, however, there was evidence that the proposed premises would be different from existing bars in certain respects. Located in a renovated Victorian building with large windows on two sides, it was to be a "fern" bar, a now-common type of saloon marked by an ambience [sic] of ferns and other plants, the interior of which is visible from the outside.

In fact, the current brass-and-brocade decor is faintly "fern bar," without the ferns. The license was granted, then appealed, then re-appealed by Sepatis and granted once and for all.
According to a 2010 Examiner interview with longtime Hobson's Choice bartender Ellis Clayton, the space remained Achilles Heel until the mid-1990s, then stood vacant for a few years before Hobson's took over. "I’m pretty sure the Achilles Heel has a lot of history to it," said Clayton.
Longtime Haight regulars may remember the old spot. If you ever visited Achilles Heel during its heyday, let us know what you remember about the bar, as well as the neighborhood's many former gay bars, in the comments.
San FranciscoUpper Haight
About 20 hours ago